Valid for hotels outside of Australia.

A Singaporean based in Australia, Kazimier enjoys travelling as much as he’s keen beans for avo toasties during brekkie later in the arvo (that’s Aussie slang, he says). Kazimier also happens to be a university student so the miles game is his only way to afford the nicer non-student budget things in life. 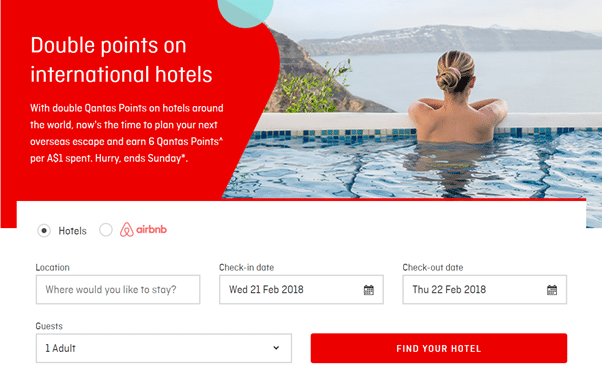 A couple weeks ago, I posted a Qantas hotels promotion that was limited only to properties in Australia. Well, the same promotion is back for all non-Australian properties booked through the Qantas Hotels website!

For reference, a stay at the Swissotel The Stamford Singapore will earn you 1,374 Qantas points at a rate of AUD$230 per night:

Although KrisFlyer and Asia Miles are typically the two main frequent flyer programs for those based in Singapore, the main reason why I’m a Qantas Frequent Flyer member is because points only expire after 18 months of inactivity, which essentially means points don’t expire if you have means of keeping them active.

Call a spade a spade, I don’t have the capacity to earn enough KrisFlyer or Asia Miles within their three-year expiry timeframe to have enough for upgrades and reward flights. So unlike its Star Alliance counterparts, Qantas’ essentially non-expiring points system works better for those who do not earn points as much and as fast as, say, Aaron.

That depends. Qantas Hotels is a direct substitute for other third party hotel booking sites like Hotels.com and Kaligo or Rocketmiles, so you’ll have to compare prices between the websites. Additionally, if you’re loyal to a flexible hotel loyalty program (like Starwood), then earning Qantas points may not be what you’re looking for because stays via this channel won’t earn elite night credit

However with this promotion, you’re effectively paying about AUD$0.1667 per Qantas point. Plus, a booking through Qantas Hotels counts as Qantas points activity so your points don’t expire until 18 months after your completed hotel stay.

For me, I tend to calculate my Qantas points worth by benchmarking the price of a business class award ticket between Singapore and Sydney, which comes up to roughly between AUD$0.05 to AUD$0.07 apiece. That being said, you can earn a lot more Qantas points through hotel bookings rather than actual flying.

Whether you’re traveling for business to Taipei or you’re in dire need of a staycation, I think this promotion is a fantastic opportunity for literally anyone outside of Australia to start earning some Qantas points… don’t say bojio!

The Milelion Community
The Milelion Community is made up of like-minded people who want to share tips to help each other travel better for less. If you've got a tip, trip report or any other hack that you think the community would be keen to know about, reach out via our contact us option!
Previous articleRegional Running: Cathay Pacific Business Class Lounge SIN Review
Next articleReview: Cathay Pacific B777 Business Class Hong Kong to Tokyo Haneda

It’s refreshing to see post about Qantas and hope to see more of them. Besides the ‘non-expiring’ points, my goal is to achieve million miler status that gets you a lifetime oneworld silver and gold. BA lifetime platinum(emerald) is harder to achieve for us who don’t fly enough.

I’m glad to hear that! I feel like Qantas has a lot to offer and most people who are extremely biased against Qantas FFP just don’t know the full picture yet! 🙂