A review of Cathay Pacific's regional business class product on the Boeing 777. Is it worth spending your Asia Miles on?

CX’s A350 offers a great experience, but when flying intra-Asia you may end up flying on the (less appealing) regional product instead. Now, the Milelion is all about travelling better for less, but if you’re all set on trying to redeem on Asia Miles (especially after checking out where it’s cheaper than KrisFlyer – or if you really want that Hong Kong stopover), you should probably prepare yourself for what you might end up flying, especially on the shorter regional routes.

The CX website paints a pretty enough picture of flying on their regional business class (and proceeds to ignore it for most of the other publicity pictures) – how does the actual experience stack up? 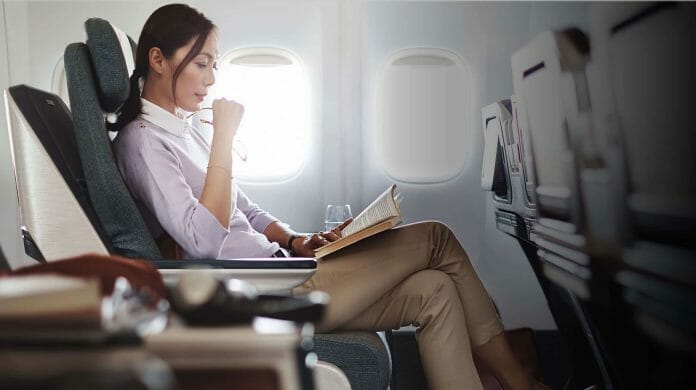 The Boeing 777’s seats are spacious enough, with universal power sockets between the seats and old-school button-style remotes under the arm rests. 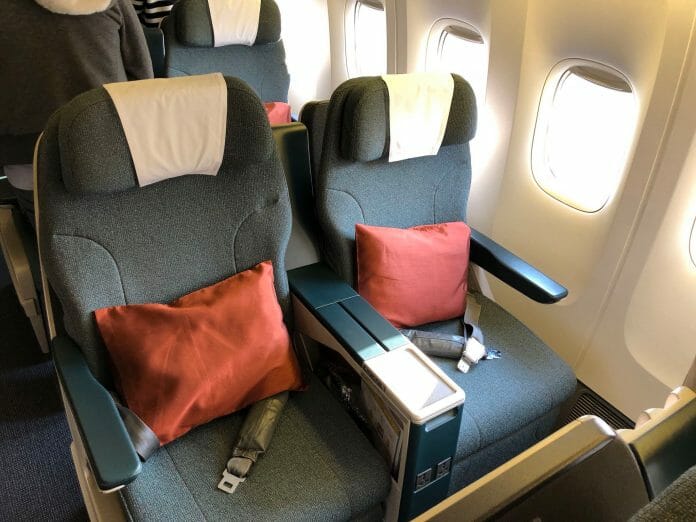 Leg room is very generous; the seats more than passed my stretch-legs-out-as-far-as-possible test.

Beside the screen there’s a single USB socket (and one of those weird round connectors I’ve seen around but never used – apparently  an EmPower port, as highlighted by Pascal in the comments), as well as some slots for personal devices. 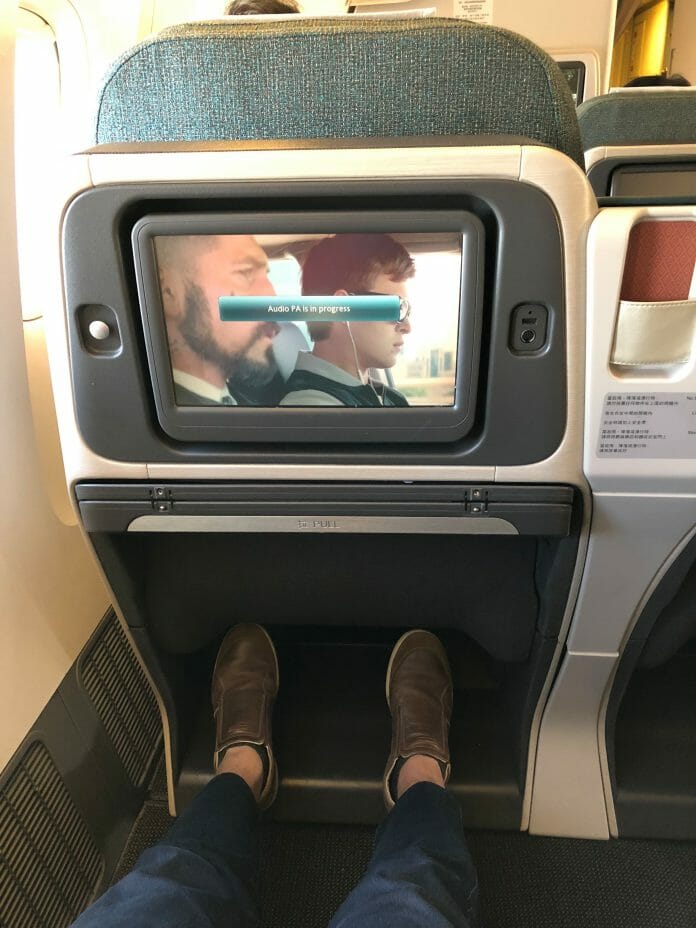 Those slots were clearly designed in a time of smaller mobile phones – an iPhone 6 (67.0mm) could (barely) fit in there, but it was just too narrow for an iPhone X (70.9mm). 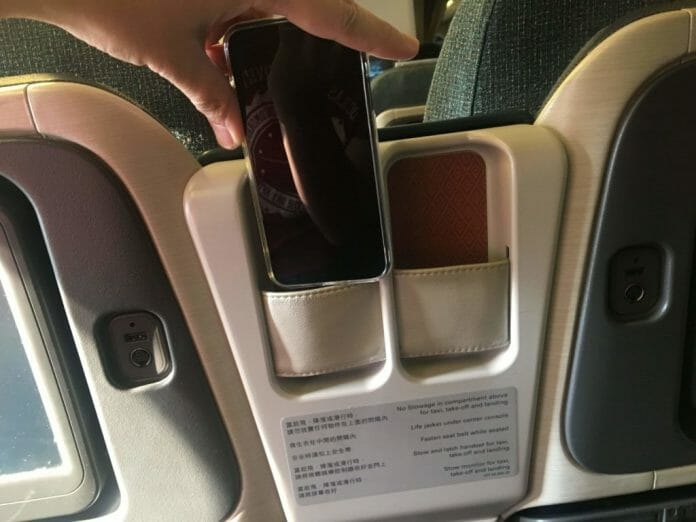 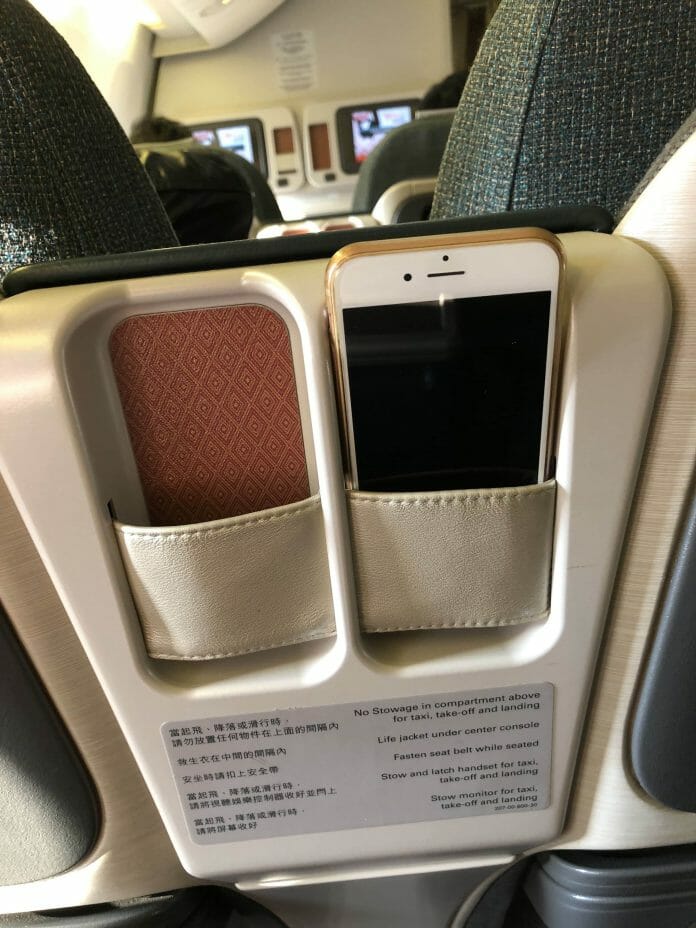 There’re no fancy controls here – the buttons just serve to reset the seat position or change the incline of the leg rest / back rest. 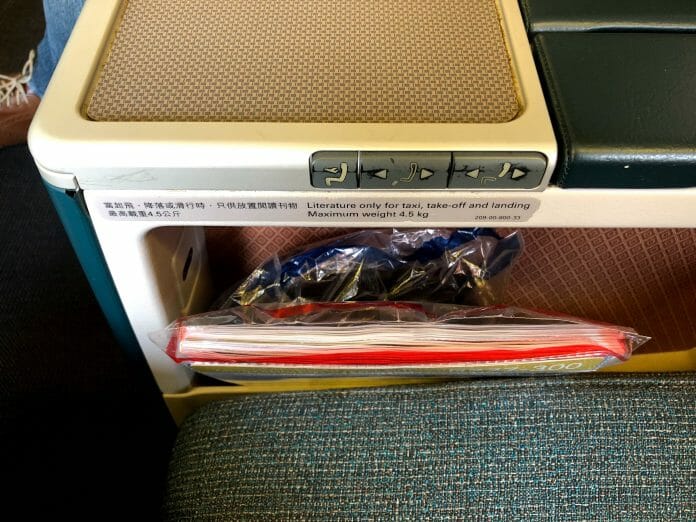 The tray table is cleverly recessed under the screen, allowing deployment in half (good for snacks and drinks) and full configurations. 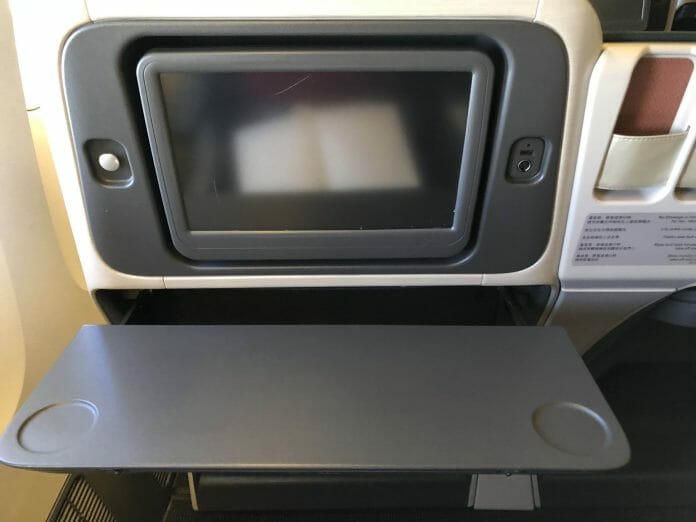 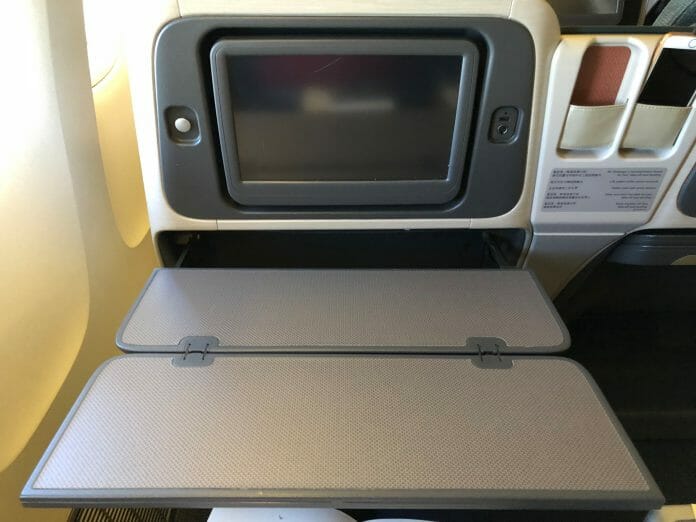 The seat doesn’t really go very far back – this is, to me, the biggest weakness of the hardware. If you do need to catch some shut-eye, the seat isn’t exactly great for this. In fact, visually you can’t really see very much difference even when the seat’s fully reclined. 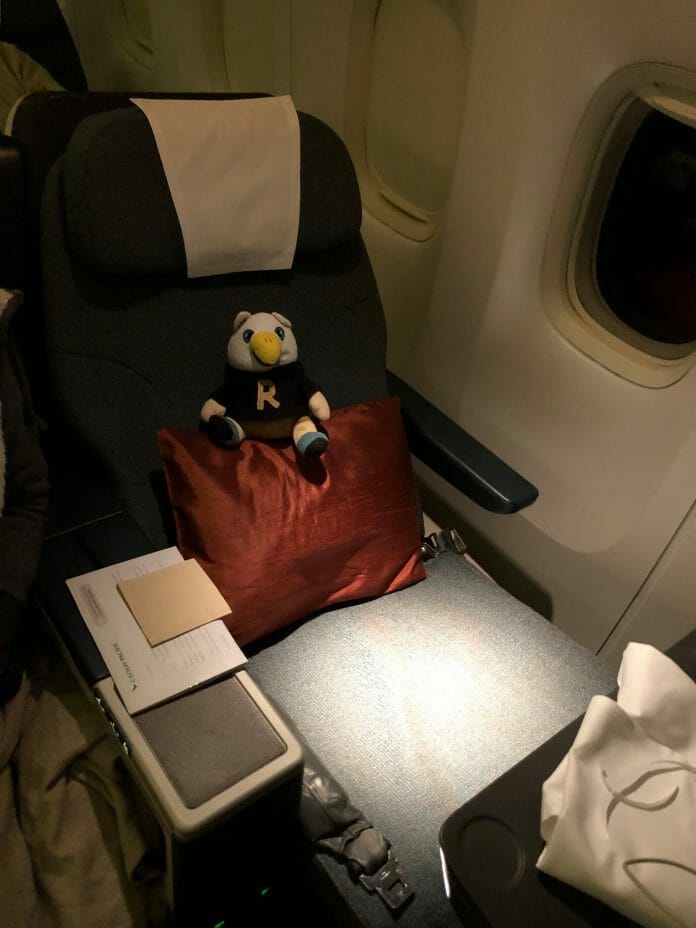 I flew on the same hardware was used both ways between HKG and HND; the food choices were different, though. Documented meal options for both for completeness – generally I think the catering is decent, but not exactly life-changing either. I’d advise eating more in the lounge‘s noodle bar before your flight!

For dessert I opted for both seasonal fruit (pretending to eat healthy) and Häagen-Dazs ice cream, because gluttony. I found the food on the flight back to be less enjoyable than from HKG to HND, though perhaps it’s my own fault for choosing steak. I’ve yet to have a decent airline steak – has anyone?

Yes, there was screaming from my in-flight movie in response to my half-hearted attempt at eating healthy. I can’t say that I usually pay attention, but on this flight the business class seat offered a great vantage point from which to observe the jet bridge being connected to the aircraft. As we disembarked, there was a message on the screen encouraging passengers to lower the window shades to ‘save the environment’. I guess this helps to reduce the amount of heat entering the aircraft (and thus reduce the energy required to cool it later); but I did wonder – if energy savings are significant, shouldn’t they make it standard procedure for airline staff to do this (e.g. as part of the cleaning process)? Cathay Pacific’s regional business class is by no means bad; it’s probably just a bit of a letdown due to the expectations of being a 5-star (SKYTRAX) airline. It’s perfectly serviceable for a short 4h flight like the one between HKG and HND, but if you’re flying out of SIN (as most Milelion readers would likely be) that’s probably part of a longer journey that you wish to make as comfortable as possible.

Still, with the superb ground experience, availability of newer A350 aircraft on the SIN-HKG route and the option of adding a free Hong Kong stopover, flying Cathay Pacific could still be a (very) viable option, as long as you know what you’re getting into.

Louis Tan
Louis believes he caught the premium travel bug after attaining KrisFlyer Elite Gold and occasionally being upgraded while shuttling between the UK, Singapore and Japan (in economy class). These travels have led to a wonderful marriage, as well as a burning desire to avoid flying long-haul economy. He previously travelled with a gryphon plush toy, Griffles, which often stood in for him in vacation photos. Griffles is mostly busy with entertaining a toddler these days, but still manages to continues amusing (and confusing) air stewardesses, hotel staff (and just about everybody else) all around the world.
Previous article
Qantas Hotels offering 6 mpd on hotel bookings until 25 February
Next article
Singapore Airlines’ new B787-10 to fly to Perth next

The weird round connector is for hanging your jacket.

Oh, I meant the one underneath the USB port… pretty sure that’s for some electrical connection of some sort!

Yup it’s supposed to be an AV input if I’m not mistaken. But yeah I’ve never seen anyone actually use it

Thanks! Learned something new today.