Anurax manages a local IT consultancy and software house. His love is in technology and how it can be implemented to improve daily lives from a social ethically productivity perspective. Flying has always been a passion and being able to view the world at 35,000 feet has always been a magical experience. 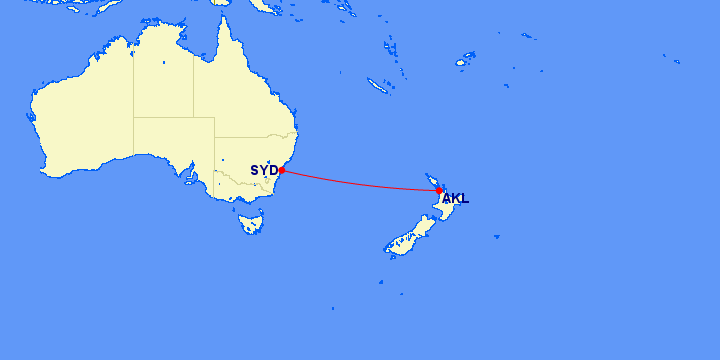 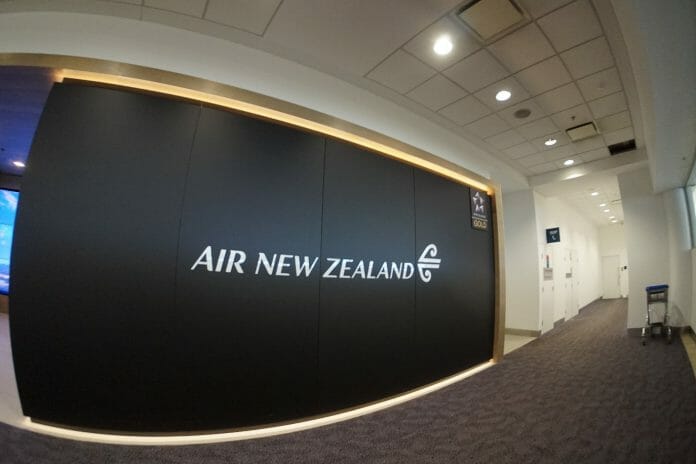 I arrived at the airport via the train at around 11:30am for my 1:50pm flight. The Kingsford Smith Airport uses only one terminal for international flights, so it was quite easy to get around. Business class passengers are given access to Fast Track security screening clearance, printed on the boarding pass.

After clearing immigration, I headed to the Air New Zealand Lounge located next to the SQ SilverKris Lounge on the second floor, near Gate 60.

This lounge has a much more modern and contemporary design compared to SilverKris Lounge. I really liked the long dining bench and the bright lighting. The lighting in SQ lounges are generally dark like KTV lounges, particularly Changi Airport T2 and T3.

I believe the food is similar to the SilverKris lounge (heard it is from the same catering service), but has a bar. The staff can mix quite a number of drinks and were really friendly too. 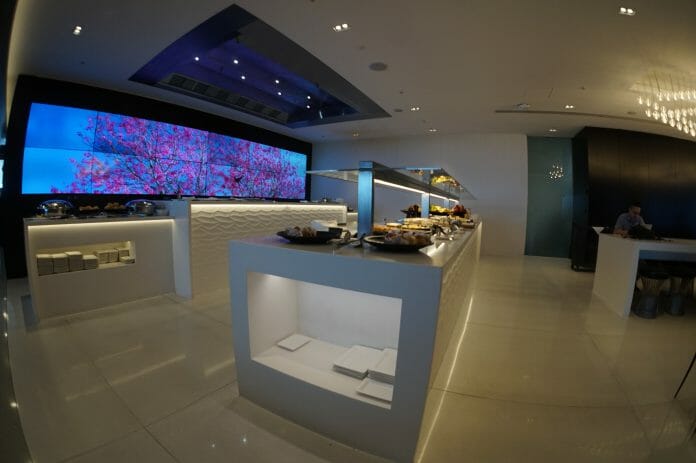 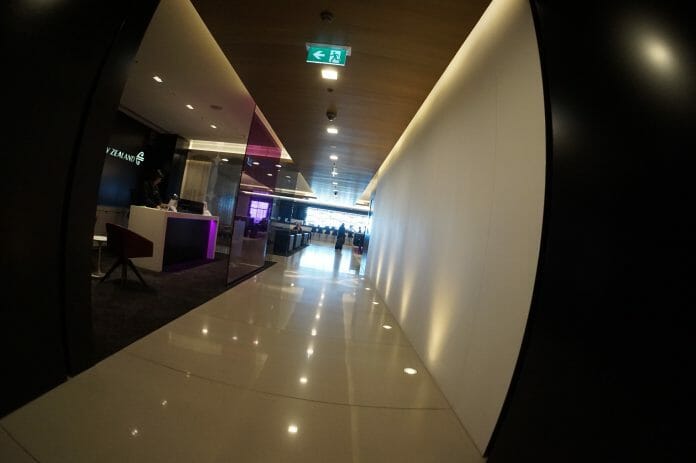 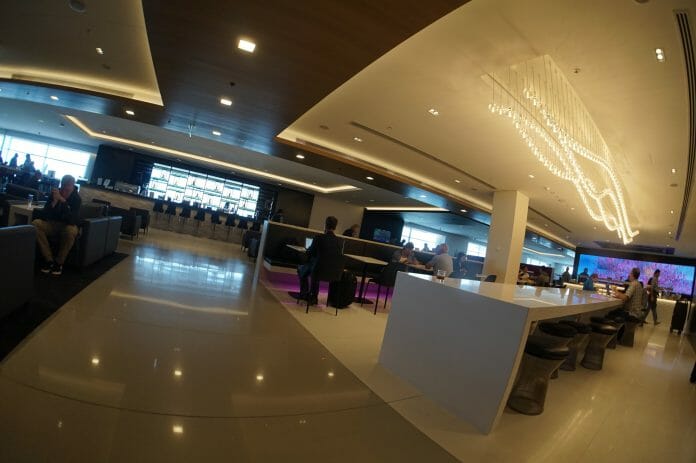 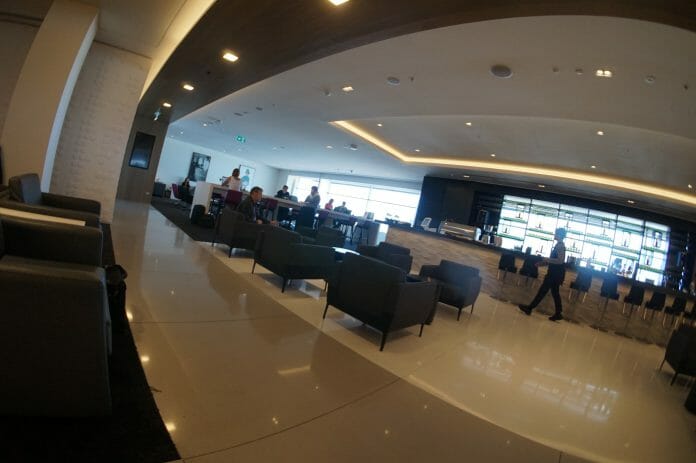 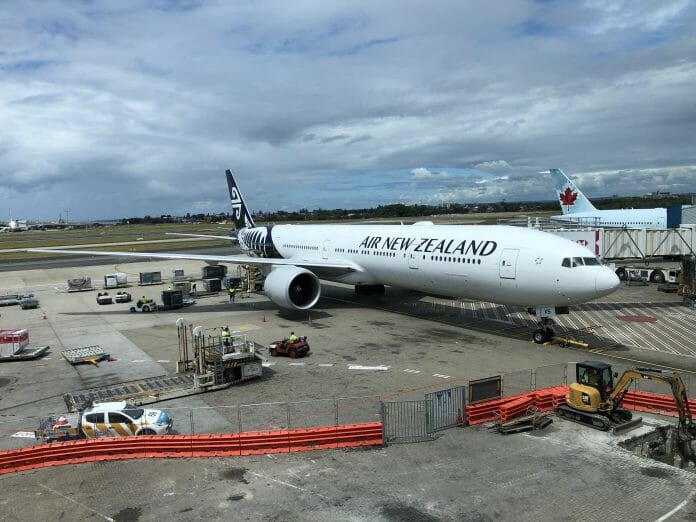 Boarding was a breeze, with the gate just a few steps from the lounge, and there was priority boarding for Business Class and Star Alliance Gold passengers.

The Cabin and the Seat 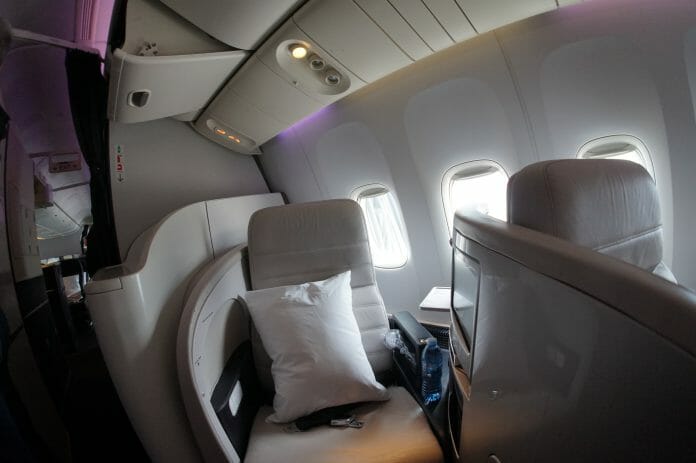 Entering the cabin of the Air New Zealand B777-200, one will notice it is very bright and clear as the main colour is white. While this plane may be a pretty old bird, it was still well-maintained and very clean, and so, it felt very comfortable.

The seat is a herringbone design which was first introduced by Virgin Atlantic (hey I’m flying that soon too). I don’t want to mince my words but it’s not a nice seat (I find the SQ A330 regional J better). The seat is narrow compared to many other Business class products . It can flip to a lie-flat bed but that was not necessary for this short flight (There will be a review of Virgin Atlantic Upper Class). There is very limited storage space and little privacy in this seat. My neighbour placed his arm on the divider and his hand was pretty much in my face.

I sat in seat 6A which is on the port-side of the airplane. All the seats on this configuration are the same – equally bad. However, the A side of the seats a bit more private as the centre and starboard-side seats are worse as they face each other.

Since the galley is at the front and the toilets are at the back, the middle seats from row 3 to 6 are probably the best choices. 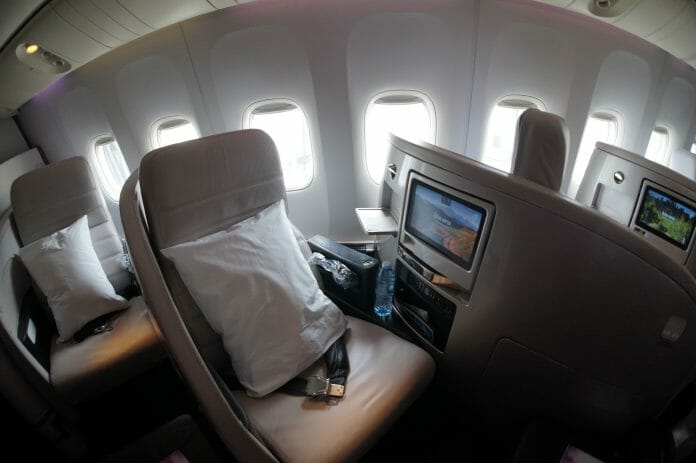 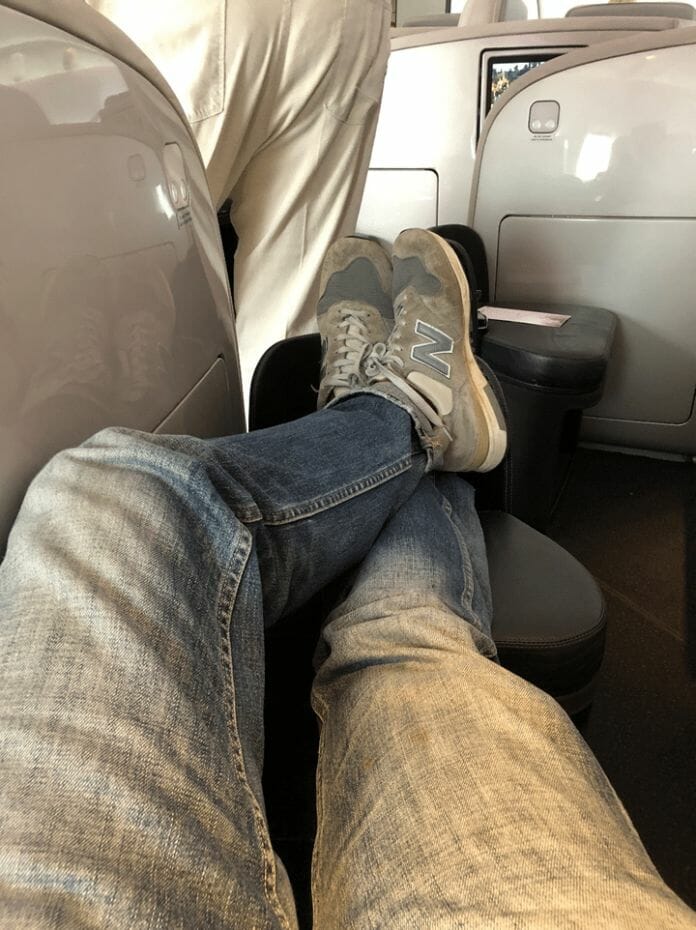 The seat was also not great lengthwise as I couldn’t stretch out my legs fully on the tiny ottoman. 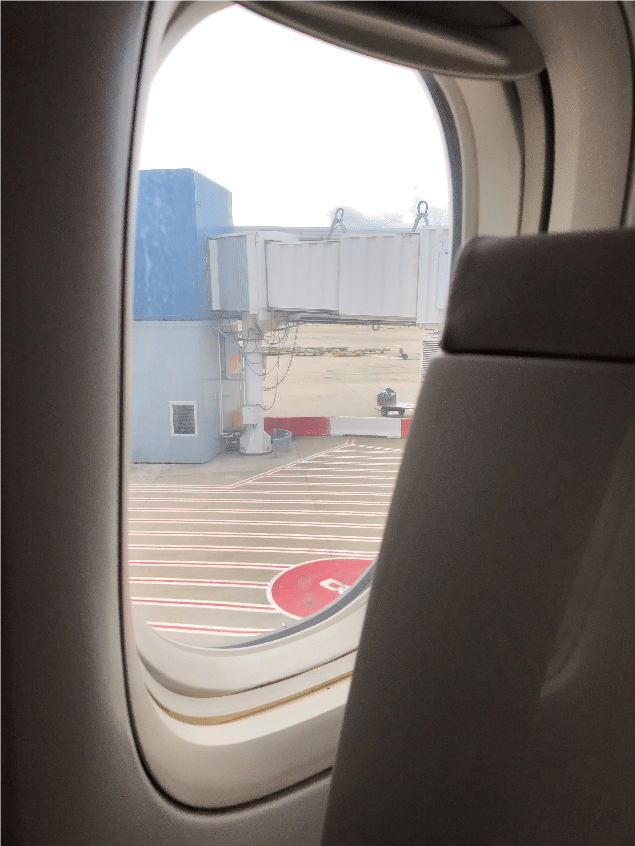 Window views are not too great either.

Contortion lessons should be taken first as one need to twist the neck a fair bit for a good view. 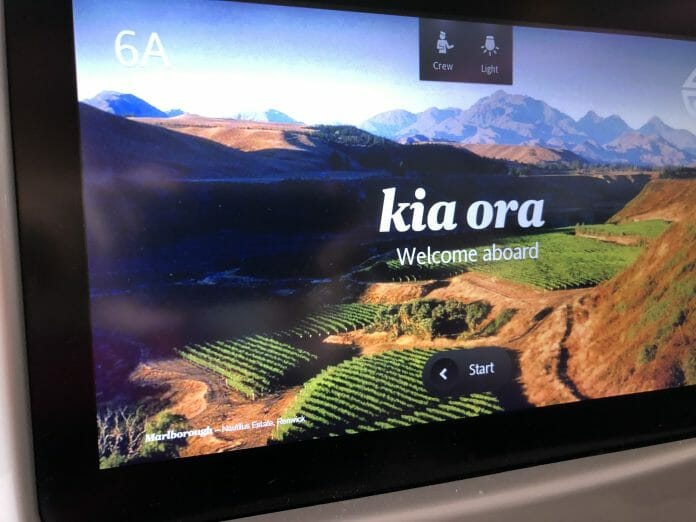 Air New Zealand comes with a  15” touchscreen. There is a controller which is really not useful as you can do everything using the screen (perhaps except making phone calls, but who does that anyway). The screen is on the left of your seat with a release button to flip it to the centre. The problem is that it must be stowed during take-off and landing in and you would need to turn your head to watch the screen (perfect for contortionists again). You will also need to fold or store the screen when you want to get up from the narrow seat .

The entertainment system was pretty good with a wide selection (mainly Western), similar to what SQ regional flights offer. I have heard both airlines use the same Panasonic eX2 system.

I found the USB charging below the screen very annoying  as the cable and phone move with the screen. 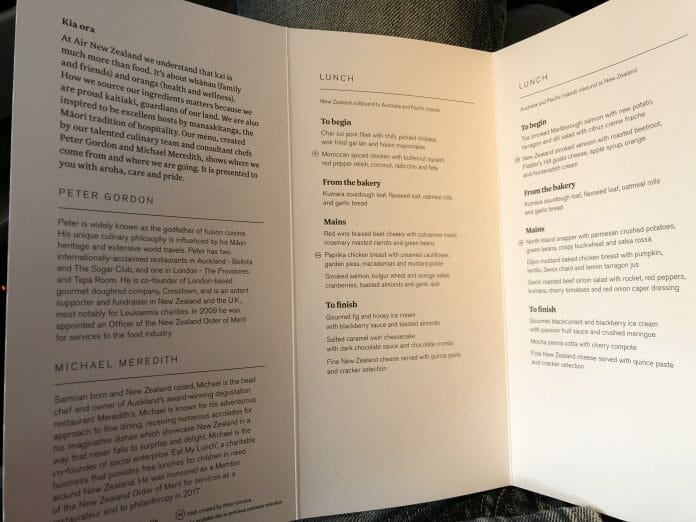 The meal was served nicely on a cloth (not a tray).

For the starter, I had the venison which tasted very nice, and for the main, the snapper which was also pretty good.

I did not have any desert as I was pretty full after the meal.

The meal service was good and well-paced. The cabin crew cleared the table promptly after I had finished. The service on Air New Zealand Business Premier is pretty good as the flight attendants were very attentive and helpful.

However, I doubt I would fly Air New Zealand on their herringbone seat again. Although the lounge, the service and meals were excellent, the hard product, as we Singaporeans would say, simply CANNOT MAKE IT LAH.

The seats are narrow and tight, with poor window views. The level of privacy is as good as Economy.

In fact, when I took a peek at the Premium Economy cabin, the seats actually looked more comfortable! Hence it would be hard to justify the cost of this Business Class product.

However, I do note that both Qantas and Virgin Australia offer only their 737 product on this route, which is a narrow body plane with recliner seats in J.

The Milelion Community
The Milelion Community is made up of like-minded people who want to share tips to help each other travel better for less. If you've got a tip, trip report or any other hack that you think the community would be keen to know about, reach out via our contact us option!
Previous article
30K Miles Round the Globe: Singapore Airlines A380 New Business Class SIN-SYD Review
Next article
LiveUp trialing S$10 rideshare benefit with Grab

Nice review. But how do you get a neighbour and divider at seat 6A in a 1-2-1 configuration ?

This herringbone config not reverse herringbone so everyone I’d very close to you. The neighbor is 5a and 7a at an angled seat not really front and back so privacy is really poor

QF has the A330 as well as 737 and they are very different J products. China Airlines has the A350 BNE-AKL which apart from food seems decent in all classes.

My last check on QF to Auckland was only served by the 737s perhaps they did add the a330 and hopefully they do. Yes their a330 regional or domestic is very good