Here’s why I might actually use KrisFlyer vRooms after all

There's some value to be had if you use the absolute minimum number of miles.

Back in JC our economics tutor drilled into us the concepts of margin vs average. Basically, margin is the rate of change. Average is the central tendency of the data in question. I bring this up because after scrolling through Mark’s coverage of KrisFlyer vRooms, the following thought dawned on me:

I’ve made a huge mistake.

In my post on KrisFlyer vRooms, I concluded that the valuation of KrisFlyer miles when applied to hotels or car rentals was a standard 0.8 cents each. But in Mark’s post, he cited the example of a room at the Pan Pacific hotel which sold for S$377 on the official site, all-in. That same room cost S$256 + 1,700 KrisFlyer miles at the lowest end of the sliding bar that vRooms lets you use to adjust the cash + miles mix. This gives you a valuation of 7 cents, way above the 0.8 cents that I cited in my analysis. What’s going on?

I quickly realised that my goof was to assume that the marginal value of a mile= the average value of a mile. When I wrote my article, I derived the value of a mile by playing with the sliding bar and seeing what the trade off was. Here’s an example:

At the Conrad Maldives Rangali Island, a King Beachfront Villa with free cancellation and full breakfast prices at S$733 a night, or S$915 when all taxes are taken into account. 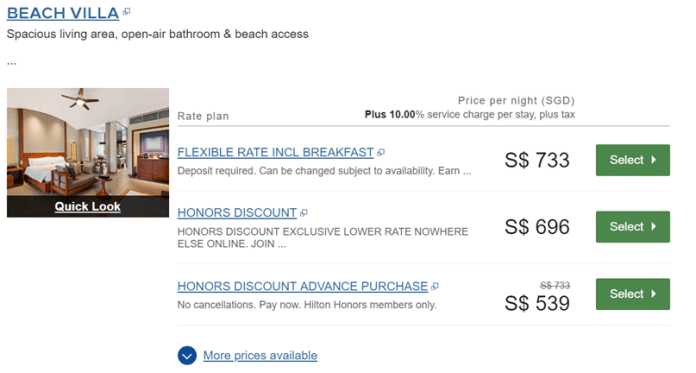 Remember however that vRooms has a sliding bar that lets you adjust the miles and cash component. In this particular case, I have 11 potential combinations of cash and points for the Conrad Maldives.

We can see the same pattern repeating itself here, for example, at the Westin Sydney where a non-refundable King room costs S$322, all-in.

The long and the short of it is that the vRooms site is actually being a bro when it prompts you that the “best deal” is to use the minimum possible number of miles. I thought they had just picked a random point in the continuum and called it “best deal”, but there’s actually method behind all this. You get the highest valuation for your KrisFlyer miles when you use the fewest possible with vRooms.

So when would I use KrisFlyer vRooms?

The realization that you can get higher valuation for your KrisFlyer miles the fewer of them you use is actually…kind of exciting. Furthermore, the fact that the baseline valuation (i.e the valuation of miles when you use the lowest possible number) is not constant across properties also implies that there must be sweet spot hotels where the baseline value of a mile is higher. How this works exactly, I don’t know. I know that within the same city, the baseline valuation at different hotels is different, so unfortunately it wouldn’t be possible to identify sweet spot cities in general.

Let me give you one last example, from Singapore. Here’s the Scarlet Hotel, with the option to pay S$186 + 2,100 miles a night for a refundable room.

The official site has a refundable room for S$294 a night all-in, which gives us the following permutations:

5.15 cents per mile is actually really, really good. The problem is that once you go beyond Option 1, your valuation nosedives. Important caveat though- this was by far an outlier. Also, I didn’t bother to check other OTAs, which might have given me a rate lower than the official site (in which case the “real” value of a mile is <5.15 cents). The rest of the hotels I found in Singapore were hovering at the 1.5-2.5 cents per point baseline. I guess what I’m trying to say is that there’s potential value out there, but you’ll have to dig it out.

The moral of the story is- if you’re ever going to use KrisFlyer vRooms, it only makes sense to use it at the lowest end of the sliding scale. I’d certainly consider using this when (1) I’m staying at a non-chain hotel and (2) I get a valuation northwards of 2 cents a mile.

Aaron Wong
Aaron founded The Milelion to help people travel better for less and impress chiobu. He was 50% successful.
Previous article
Malaysia Airlines “Be Enchanted by Australia” sale now on until 31 May 2018
Next article
Hilton Smile Our Sale is Here flash sale – Southeast Asia up to 30% off

Thanks for the eye-popping screenshot of your account balance :p I recall the reactions it triggered during the Milelion Masterclass…

aye. that’s what i meant when i said OTAs may well have it cheaper, and in that case your real value is lower. I looked at 15-16 june. It seems like you can find higher valuation on some days at least- check out what Mark found for Pan Pac.

I might sound cynical, but how many of your readers are willing to pay $700 of their own money for a hotel room?

Aaron – well-spotted
However, I wouldn’t be too quick to pull the trigger without first offsetting this against the hotel chain loyalty credits that you would be forgoing … I’d bet the 8 cpm premium becomes no longer meaningful … unless one exists outside of the hotel loyalty microsystem.

True, but if you’re looking at a non chain hotel…

In addition, whether it’s a chain or non chain hotel, If I booked via an OTA like Agoda, Expedia or Kaligo using certain CCs, I would be able to generate 6 to 10 Miles. Miles I’d have to forgo if I used vRoom. There’s the WWMC for 4 Mpd via online but I don’t own that atm…

i mean you got to think about this in terms of opportunity cost as well. a good example is redeeming a ticket with miles (and therefore not earning anything) versus buying a miles accruing revenue ticket.

True, whether it’s redeeming for flights or hotels, both are forgoing the opportunity to earn miles. I guess I still value luxury flights over hotel stays because luxury hotels are still considered more accessible by the masses. But in terms of value as your article has mentioned, there might be some value gotten from ‘sweet spots’ 🙂

Once you compare with ota pricing, all your analysis crumble and become invalid

I want to share my appalling experience with KrisFlyer Vrooms and recommend that you never ever use them for your bookings. I booked a car in Portugal using my frequent flyer points and everything seemed to be great. Unfortunately, two hours after picking up the car I had an accident. The car rental company could not provide a replacement because they did not have another car with an automatic transmission that I required. I called KrisFlyer Vroom emergency number and had to spend about half a day on the phone with them. The emergency number staff said they have nothing… Read more »

maybe can only use vrooms for hotel