I had arrived at CMB on Sri Lankan’s A320 in Economy, which I won’t write up in a full review. The cabin had been retrofitted with new seats, and though leg room was a little tight, the service and overall quality of the flight was pleasant. If you find yourself on the Sri Lankan A320 Neo in Economy, the Emergency Exit row only has 2 seats, so if you can get a window seat behind the emergency exit row, you will have unlimited leg room because it there is nothing in front of it.

Sri Lankan’s main lounge at CMB is called the Serendib lounge. It’s an exception in CMB in that it is actually quite pleasant (though it’s still small). My experience of the other CMB lounges (aside from Emirates dedicated one) is that they are all pretty bleak.

When I visited (around 11am), it was very busy. I didn’t take a lot of photos because I couldn’t get many without getting a lot of people in and I still feel a bit odd about posting pictures of people on the internet without their consent.

The lounge is small but has decent runway views 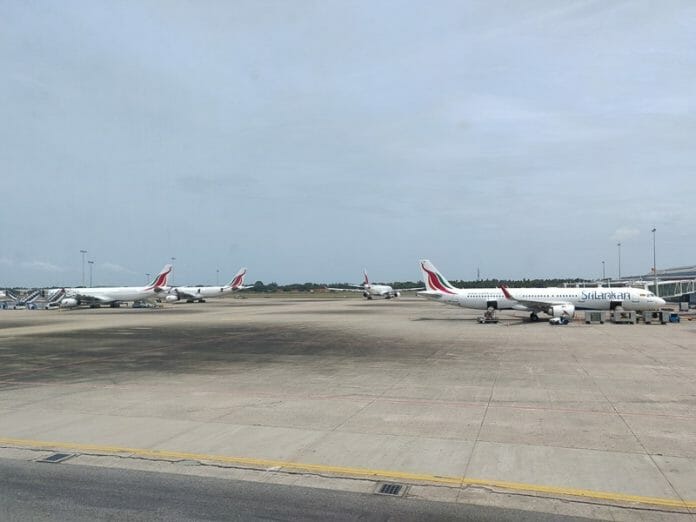 At around 12pm, the lunch buffet opened. It was pretty extensive and I was excited to get the first curry of the trip under my belt. 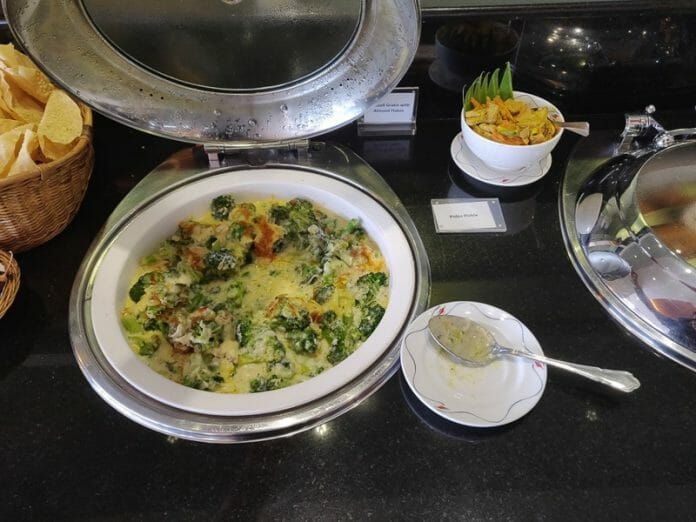 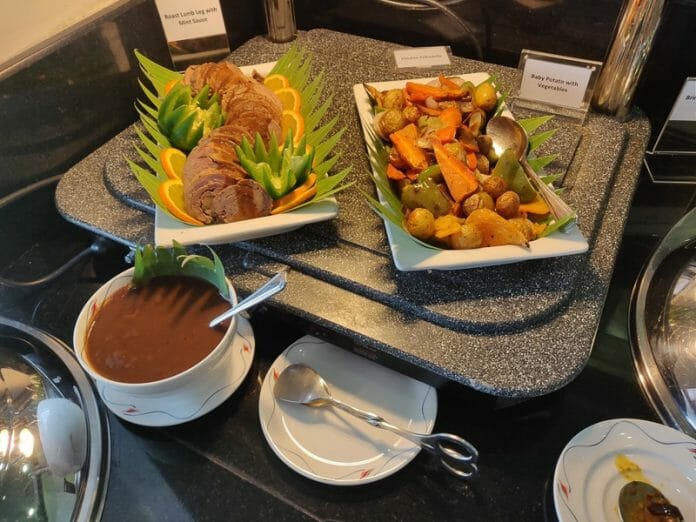 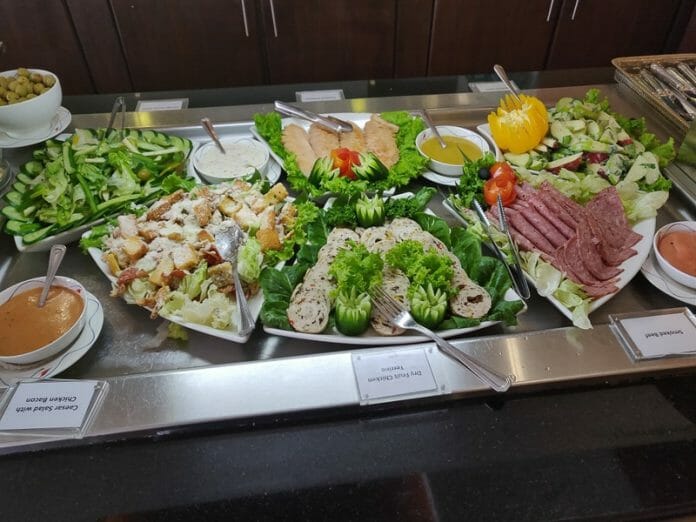 The internet was also fast enough to handle most tasks, which is something many lounges don’t manage.

I had a quick look around duty free, and there were a few interesting whiskies on offer, as well as the most terrifying promotion I could think of: 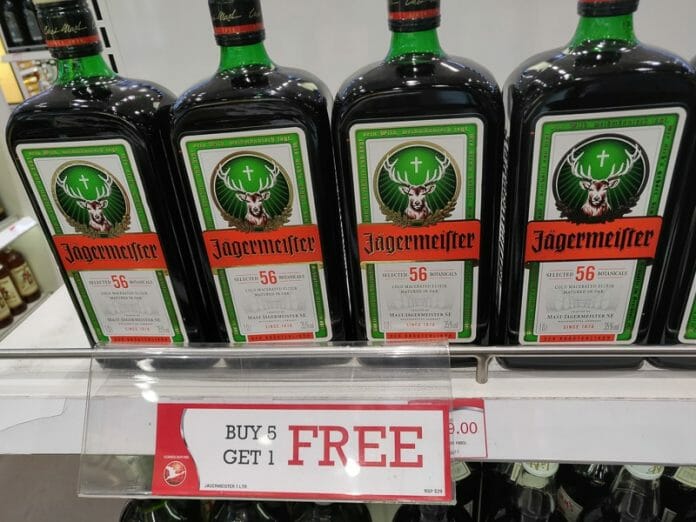 The only scenario I can think of where you’d want that much Jagermeister is if you wanted to erase all your memories and considered a lobotomy too precise. 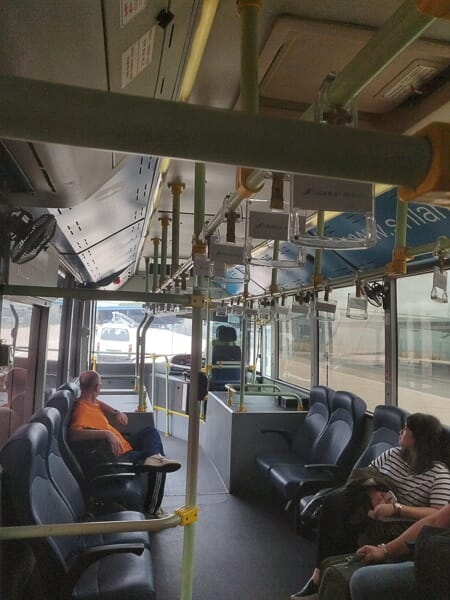 The cabin consists of 3 rows of 2-2 recliners and the seats appear to be fairly new. 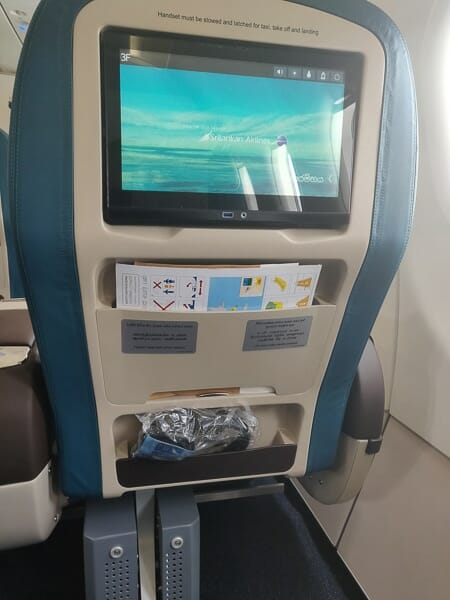 Today’s load was about 6/12 so I had two seats to myself – score! The FA came around soon after and offered a towel and PDB. I went for juice as I didn’t really need to be drinking champagne at lunch time on a weekday.

Soon after I was given the menu, which looked like this: 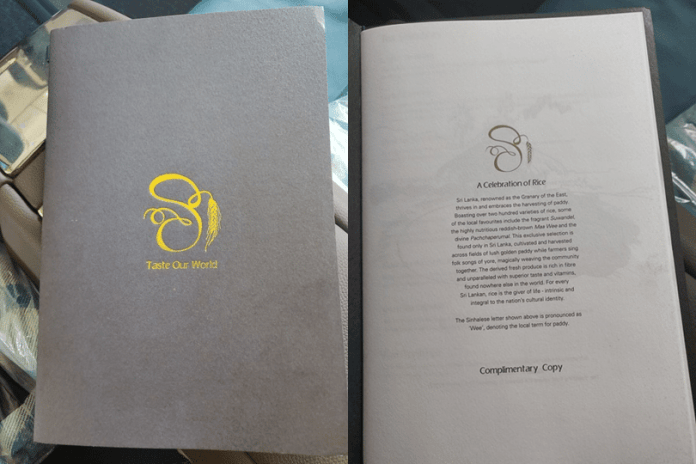 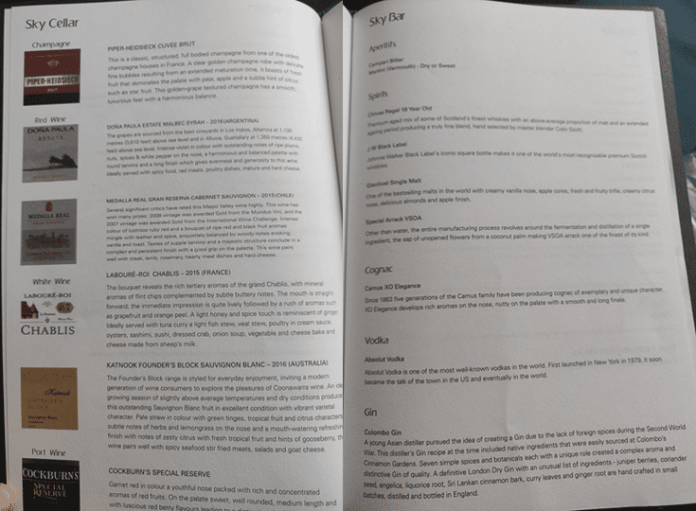 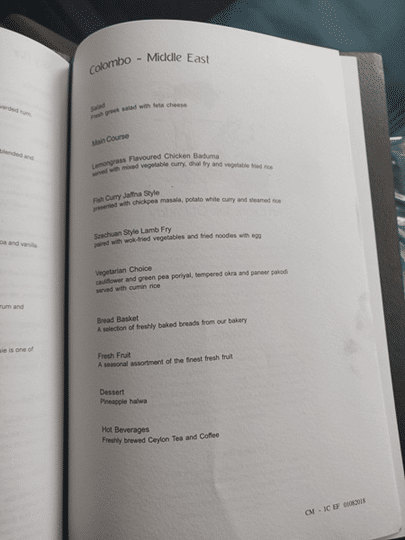 Most importantly, it had a curry on it. This was, after all, the reason I was taking such a circuitous route. We pushed back on time and were treated to some great views of the Colombo shoreline on our climb out.

The seat is very comfortable, with good recline and plenty of space. The IFE is new and there is a USB port below the screen and a 110V AC port in the seat. 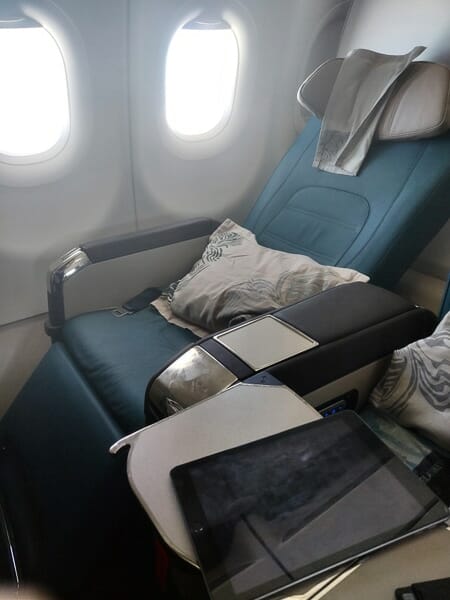 About 20 minutes after take-off the FA came around to serve drinks, and take lunch orders. She pre-emptively offered to bring lunch later on in the flight, which I thought was a nice touch. UL don’t advertise dine on demand service, so it’s nice to have empowered FA’s willing to offer it when it’s doable.

I opted to have some spiced tea and wait another hour or two for lunch. The spiced tea came with cashew nuts and I thought the presentation was very good. 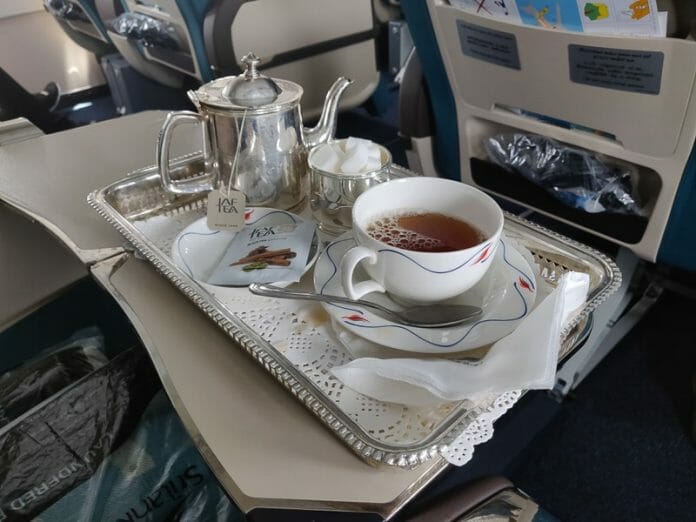 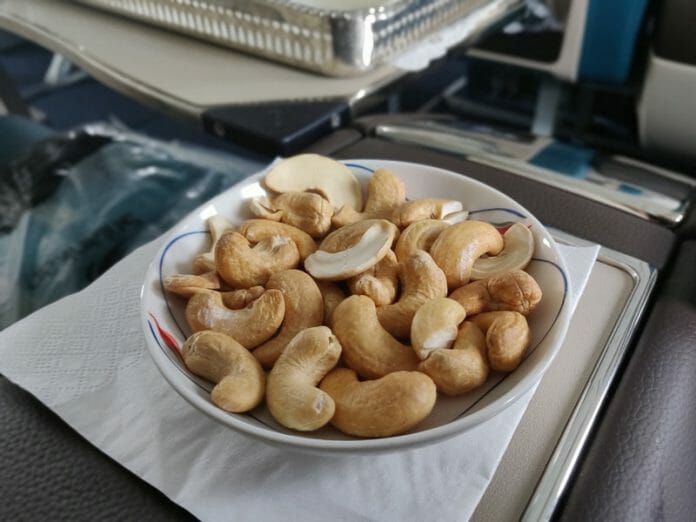 With a spare seat next to me, I decided to spread out (am I guilty of manspreading?). 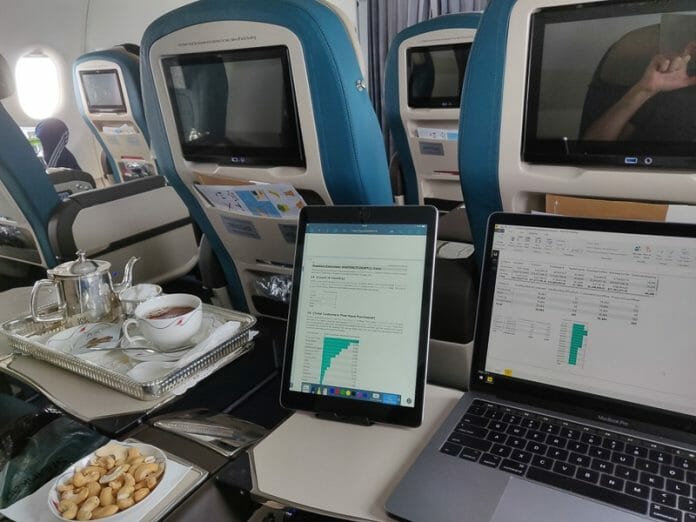 I compensate for missing inches in other parts of my life with additional inches of screen real estate.

Once I’d finished pretending to be busy and important, I asked for my lunch.

It all came on a single tray. Curry isn’t a visually exciting dish, so I didn’t have high hopes for the presentation, but I thought it was still pretty good. There was a healthy amount of chapatti to work with too, which I always appreciate. 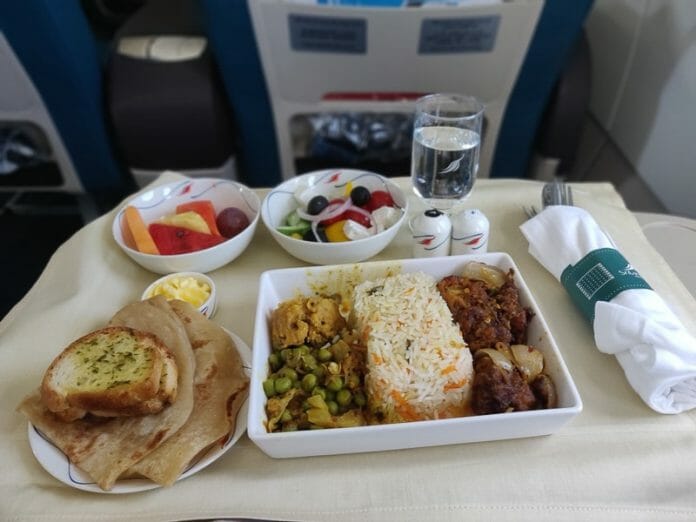 After lunch I plodded on with some work and watched the IFE map. Normally when flying to Doha, you’re on Qatar which has airspace restrictions around the UAE and Saudi (and other neighbours) which makes for a more convoluted routing. UL however has no such issue and can fly the more direct route. 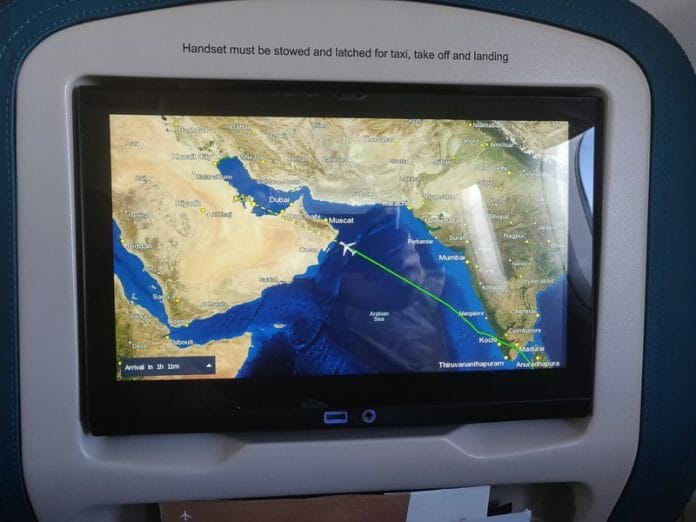 Soon enough we touched down at Hamad International at what transpired to be a very quiet time in the day. Overall, I was impressed with Sri Lankan. A daylight, narrow-body, recliner seat is not going to blow minds, but it was a solid offering overall.

The Milelion Community
The Milelion Community is made up of like-minded people who want to share tips to help each other travel better for less. If you've got a tip, trip report or any other hack that you think the community would be keen to know about, reach out via our contact us option!
Previous articleCircuitous Curry Routings: Introduction
Next articleAnnouncing The Milelion’s Monthly Miles Meetup for January

Dull and listless like a primary school trip report …Stick to your day job Sam I’m sure you are better at it.

Not really looking forward to this on a 2:30am flight, but I’ll take what I can get! Thanks for the review. 🙂