Meanderings in the 'enhanced' wastelands

With the recent announcement that Singapore is Qatar’s first all QSuites destination (first-with-multiple-daily-flights if we’re being technical), it seemed a fitting time to brain dump everything I know about the Al-Mourjan lounge into a single report so that anyone trying Qatar would be able to maximise their stay. I’ve accumulated this knowledge over a number of trips, a reasonable percentage of which had stupidly long layovers because I was going for cheaper fares or on award bookings. So brethren (and sorority) gather ye and hear tales of the distant land.

Two things to note about the Al-Mourjan lounge

Aim for the infamous bear statue/monstrosity and you’ll find signs for the Al-Mourjan lounge. At the bottom of the escalators there will be a trainee lounge dragon who will scan your BP to check if you’re allowed in. 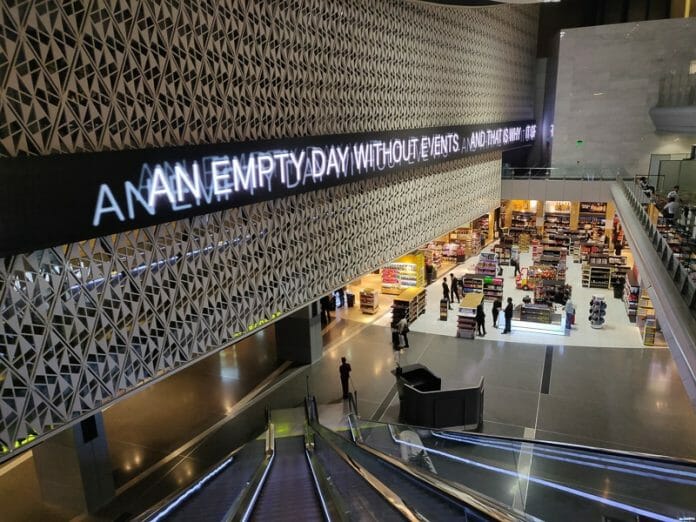 Qatar doesn’t play nicely with other OneWorld members, so you can’t get into Al-Mourjan unless you have an onward boarding pass in Business Class on a Qatar Airways (or QR codeshare OneWorld member) flight.

That said, Qatar has taken a step down the well-worn path of cash strapped airlines and now allows you to pay to access the lounge if you’re in Economy, but I haven’t seen a price advertised anywhere. 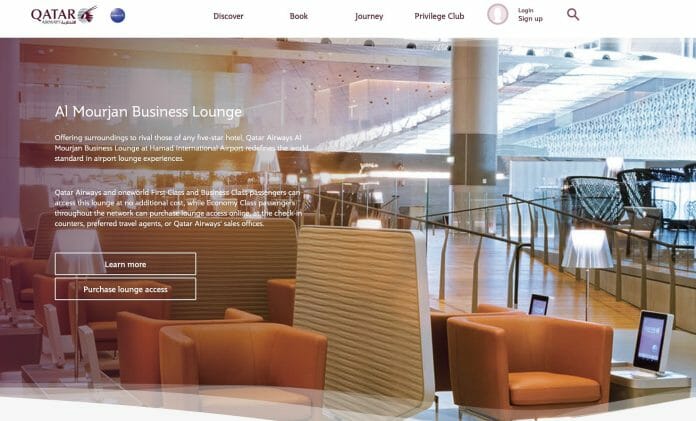 If you hold OneWorld Emerald or Sapphire status (including from Qatar Airways) and are travelling in Economy there is another lounge you can access. It has most of the same catering as Al Mourjan but is smaller and has fewer amenities.

Once you enter the lounge, there is a large open area with various types of seating. 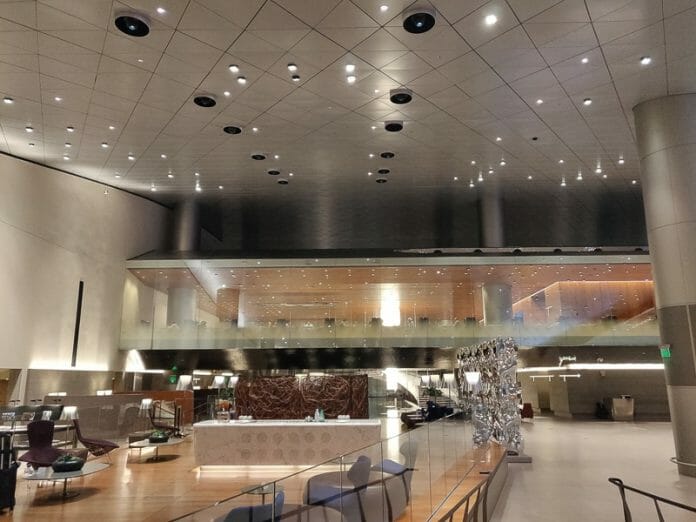 To the right is a fountain and a staircase and to the left is more seating and eventually the ‘sandwich bar’. Straight ahead is one set of loos and showers, more seating, the business centre and prayer room. 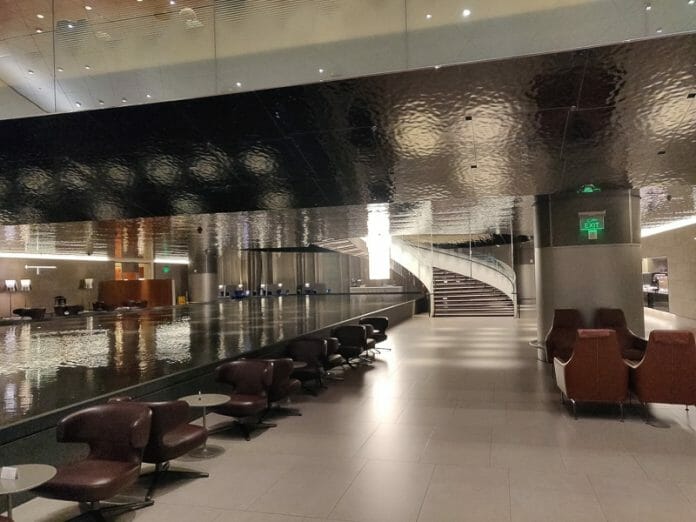 If you go up the stairs by the fountain, you get to the main dining area which has a large bar and two buffet stands with some dishes unique to each one, and some common to both. When the lounge first opened they used to have Krug Grand Cuvee at this bar, which was fairly heavy hitting stuff for business class, but these days I think it’s Lanson or GH Mumm or some equivalent. 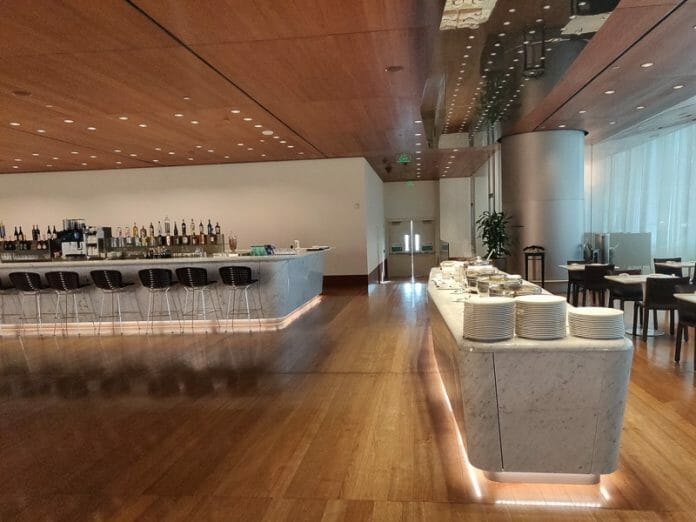 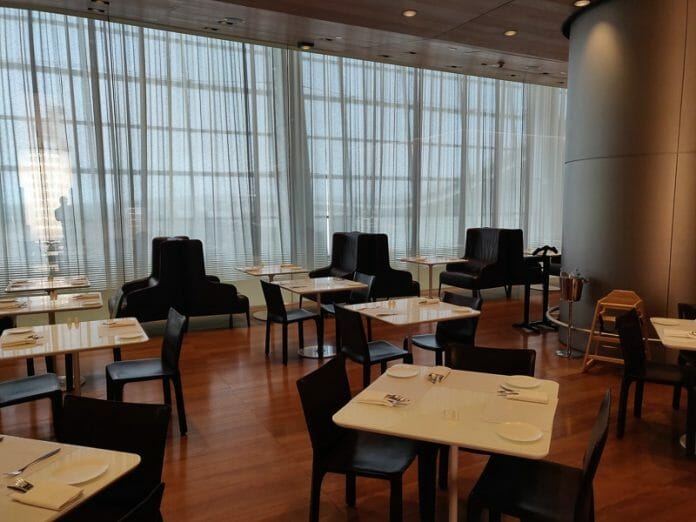 The barman here will knock you up a mocktail (or cocktail). They created this manly tower of testosterone when I asked for “something refreshing – surprise me” 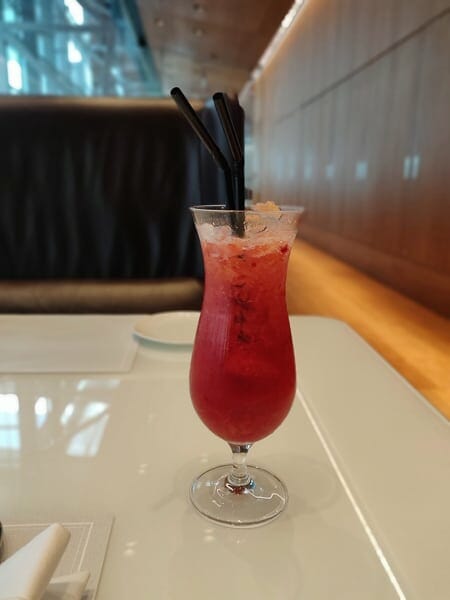 Back at the entrance, if you go left, past all the seating you get to the Sandwich Bar. 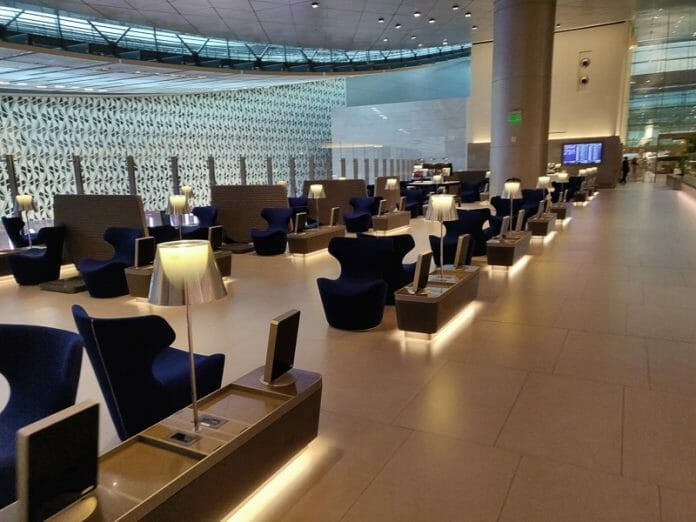 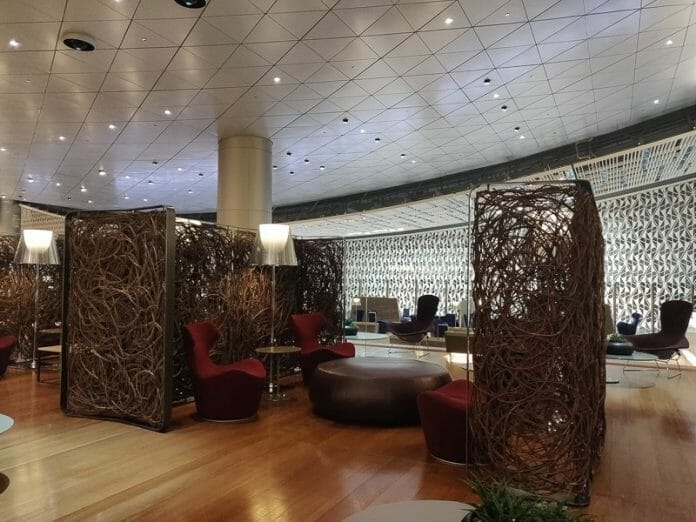 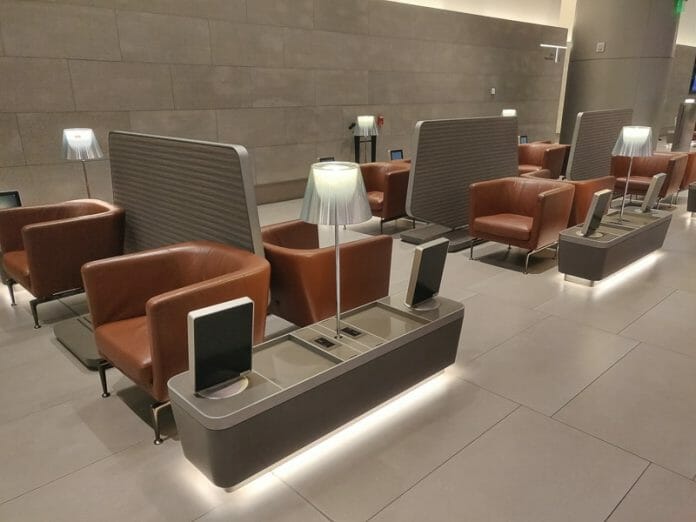 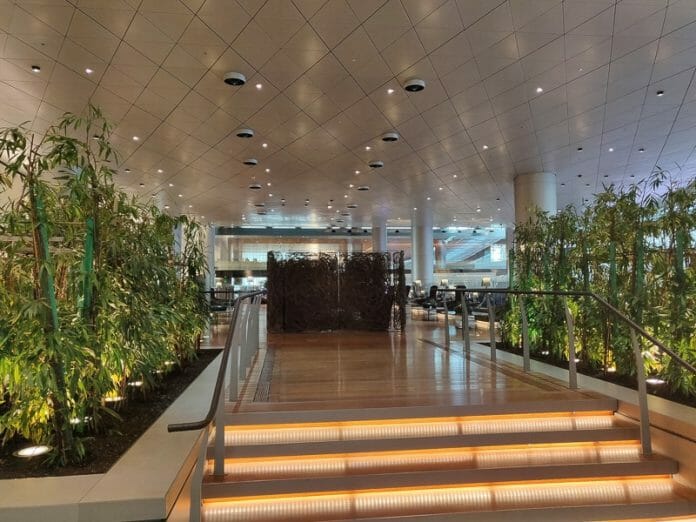 There’s another bar here and (you guessed it) they serve sandwiches. 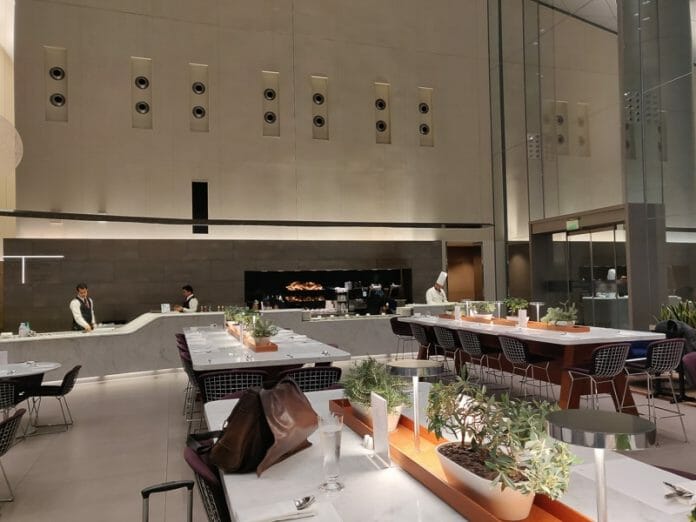 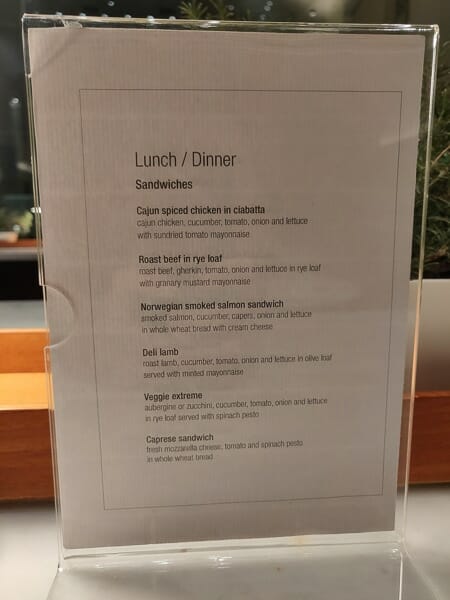 If you ask nicely, they can make a salad out of the sandwich ingredients, but they sometimes take some convincing. 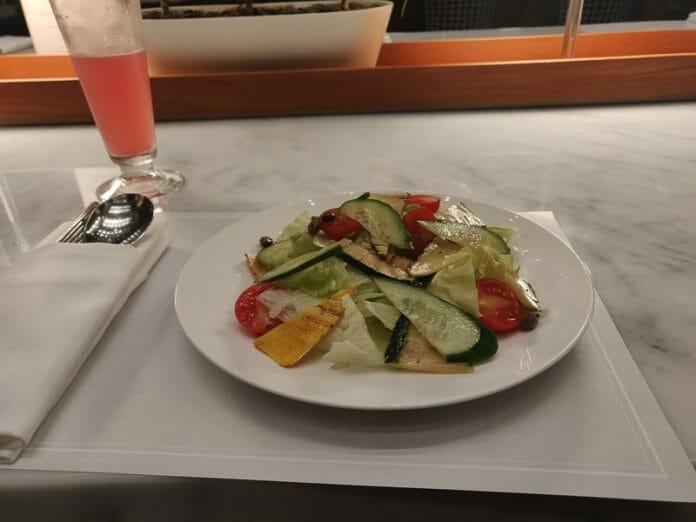 At the end of the sandwich bar is the ‘family room’ which has a lackluster offering of broken tech for your entertainment. 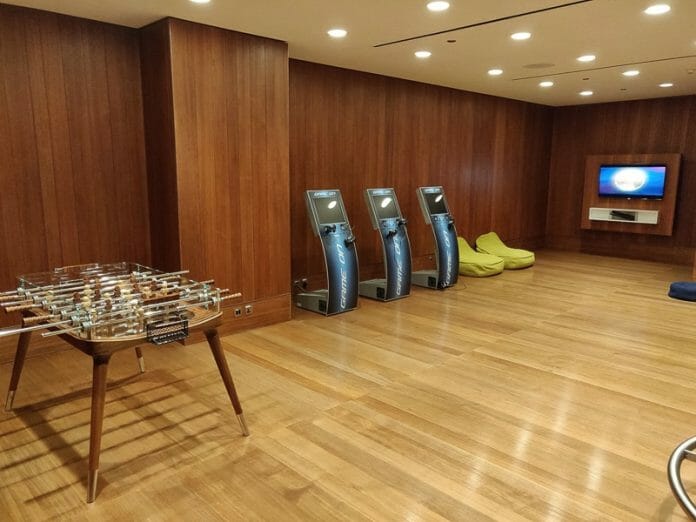 At the opposite end to the family room is one of the underrated features of Al Mourjan: the Quiet Rooms.

I’ve had suprsingly good luck with these and infrequently found them all occupied. There’s a desk with a receptionist who can allocate you a room (I think there are 12) after they take your boarding pass details (presumably to make sure they can wake you up if you haven’t surfaced near your flight time). 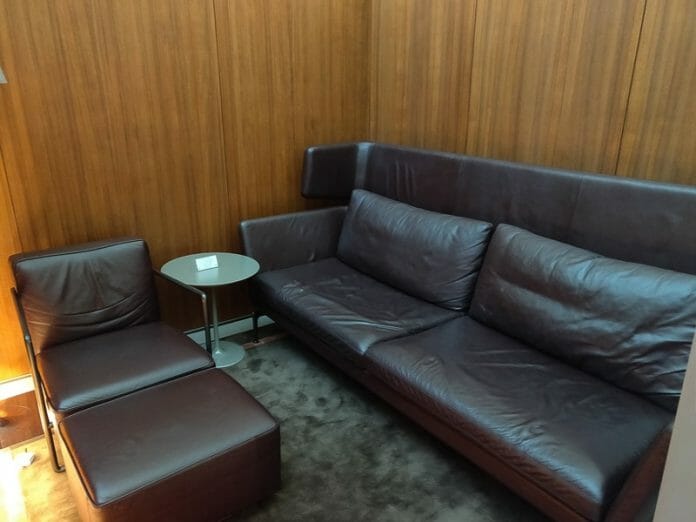 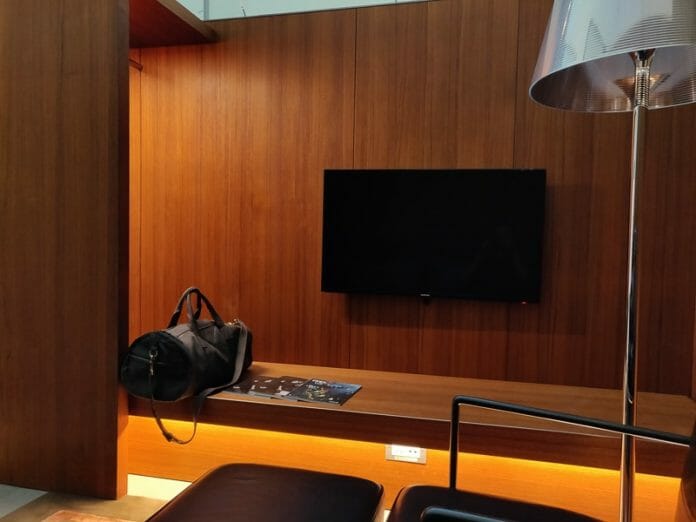 The rooms are a very good place for a nap. The sofa is, by my estimate, over 2m long so most could sleep comfortably on it. Surprisingly, they’re quite good at policing the quietness, so it’s usually quiet enough so that you only hear other people snoring (vs them talking on their phones).

The same reception desk can also book you a shower here. Most people go and queue at the other shower rooms near the entrance, so this one is sometimes not as busy (though I have been 2ndor 3rdin line at peak times – usually not more than an hour’s wait). I don’t make a habit of photographing bathrooms so you’ll have to take my word for it; I found them better than most lounge showers that I’ve visited. You get a separate toilet and shower in one private room (unlike SQ), there is plenty of space and everything still feels quite new (unlike EK).

The shower attendants are extremely nice, if anything too much so (I’m not sure if they expect tips). I’ve also had some success getting a shirt ironed while having a shower, but not a 100% success rate.

If you find the Quiet Rooms full, there is another decent place to sleep, in the back of the Business Centre. The Business Centre is almost directly opposite the lounge entrance and has more seating and some very pleasant working spaces, and at the back of it there are some recliners that look like this: 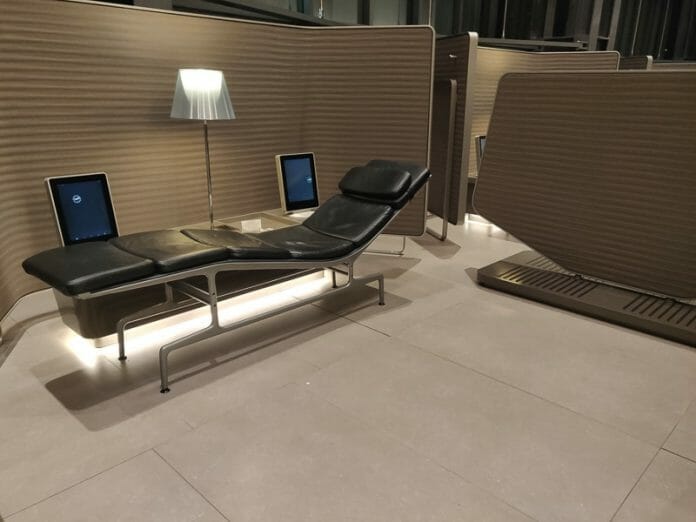 These are not as private as the quiet room, and you may have someone sleeping in a lounger next to you, but it’ll do the job in a pinch. Unlike the Quiet Rooms it’s brightly lit here (so you’ll probably need an eye mask).  The shape of these recliners also seems to make people’s snore more, so earplugs or a noise cancelling equivalent are probably a good idea).

Behind these recliners are some large windows with decent gate views which can make for OK plane spotting (I saw my first A350 here a few months after it launched).

The business centre has plenty of seating and is surprisingly well set up for working. 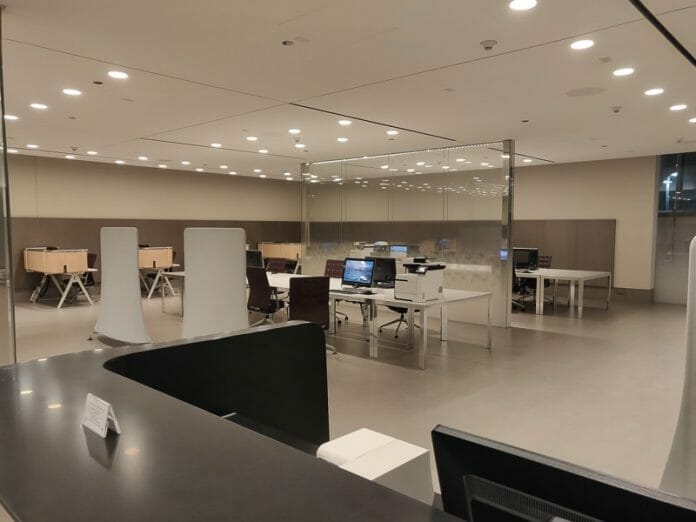 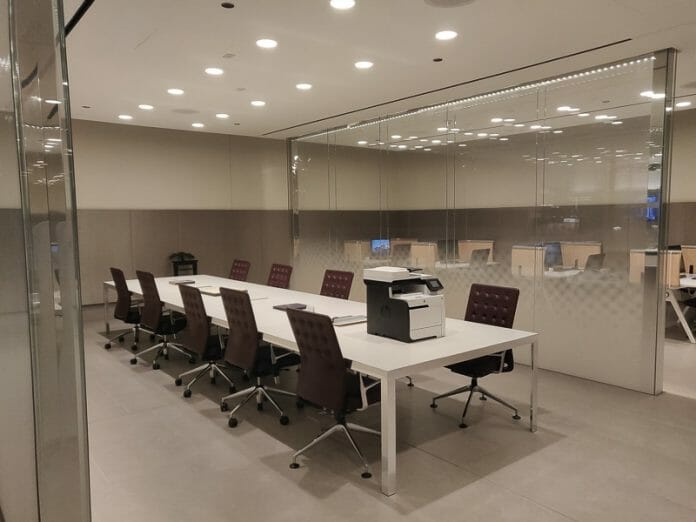 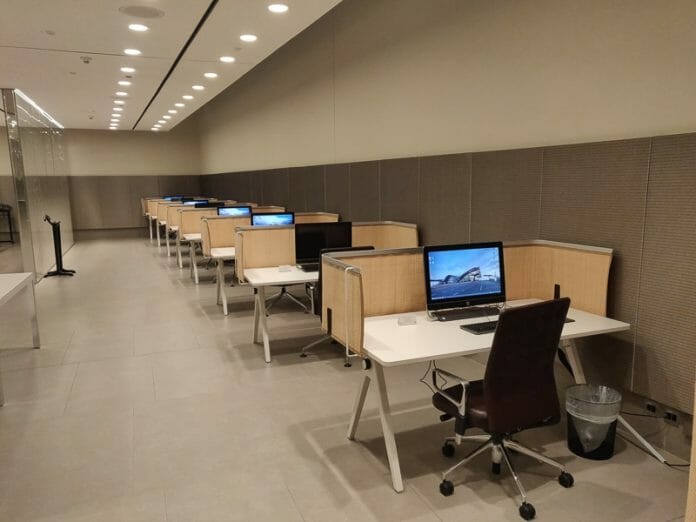 Scattered throughout the lounge you will find small self-serve stations with water and soft drinks and a few coffee machines with dates and pastries next to them. 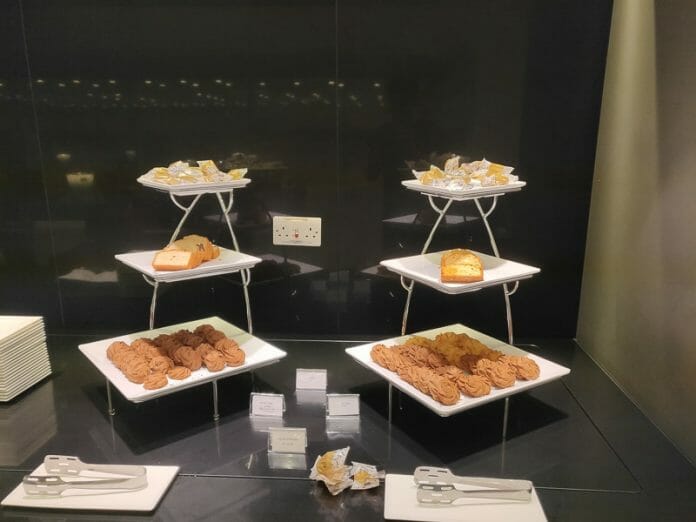 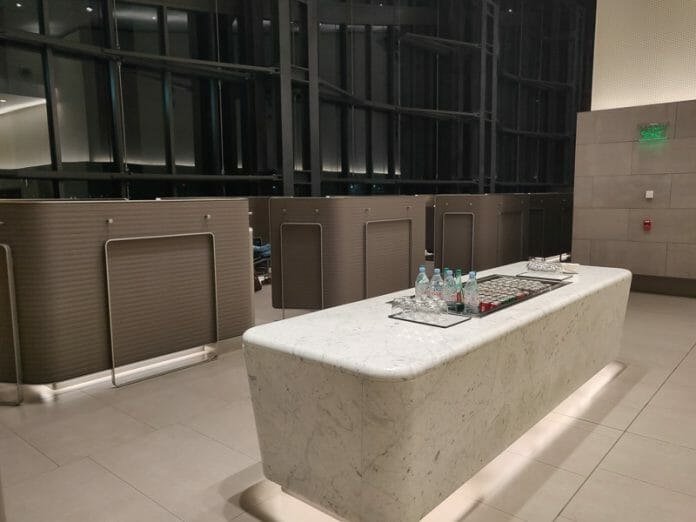 The WiFi is also decent, though they appear have a VPN blocker which may hamper your work efforts if you use a corporate VPN.

In short, it’s still a very pleasant lounge (despite the “enhancements”) with a few little niches worth knowing about, and you’re unlikely to suffer staying there even on a long layover.

The Milelion Community
The Milelion Community is made up of like-minded people who want to share tips to help each other travel better for less. If you've got a tip, trip report or any other hack that you think the community would be keen to know about, reach out via our contact us option!
Previous articleFind better awards faster at 2019’s first Power Award Searching workshop
Next articleCircuitous Curry Routings: Qatar Airways A320 Business Class DOH-NBO-DOH Review

Re the shower. Do they have horizontal sprays like those at BKK lounge?

Sam Thornton
Reply to  Will

I haven’t seen the BKK one, but the shower here has a ‘normal’ overhead rainfall thing and then a detachable head/sprayer.

Regarding the price that economy class passengers can pay to use this lounge : it’s SGD 168 for a maximum of 6 hours. The price is revealed through a “purchase lounge access” in a booking related email. Thought I’d share since you mentioned there wasn’t an advertised price.