Reconciling bonus points can be a pain, but the DBS Virtual Assistant's new functionality can help.

Here’s a typical headache DBS Woman’s World cardholders face: you earn 4 mpd (10X points) on online spending, but only get 0.4 mpd (1X) upfront*. The remaining 3.6 mpd (9X) is credited on the 16th of the month after.

Ditto for DBS Altitude cardholders. You earn 3 mpd on online hotels/air ticket bookings, but that’s split into 1.2 mpd upfront, and 1.8 mpd on the 16th of the month after.

Because of the vagaries involved in classifying transactions (e.g. did the merchant take the card number online, but manually process the transaction offline?), reconciliation is sometimes necessary to ensure bonus points are properly credited. The problem is: how do you do it?

In the past, it was possible to get an itemized listing of points per transactions sent in Excel format, but it really depended on how well you could sweet talk the DBS CSOs. Some received it with no problems, others were told flat out it wasn’t possible.

That’s why I’m glad to see that DBS’s investments into artificial intelligence are paying dividends. Thanks to pokkaface in the Milelion’s Telegram Group, I’ve learned that it’s possible to view transaction-level rewards points and individual merchant MCCs through the DBS Virtual Assistant.

Here’s how to do it:

In your internet banking, click on the icon in the bottom right hand corner to bring up the Virtual Assistant. 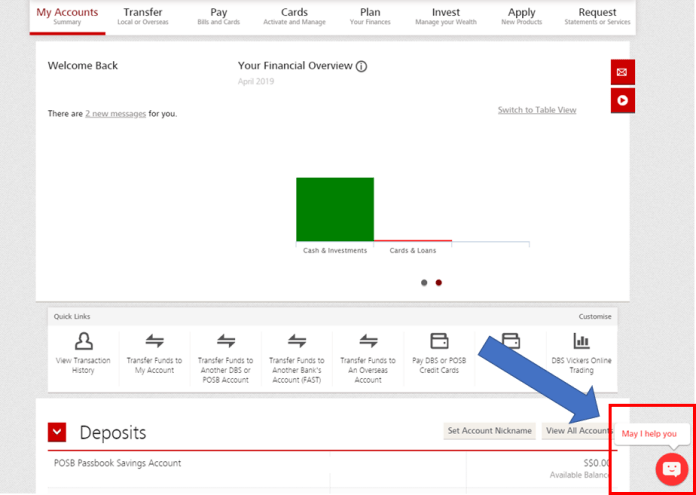 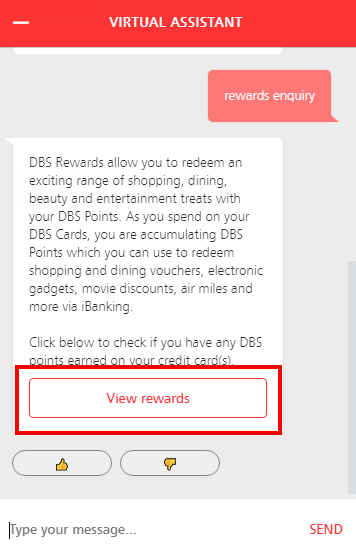 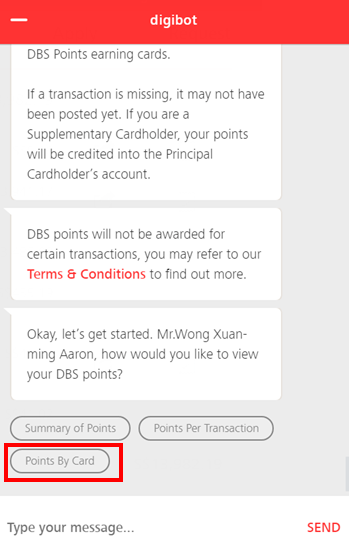 Select the card in question 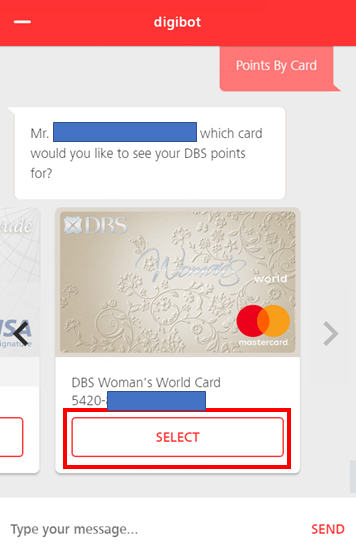 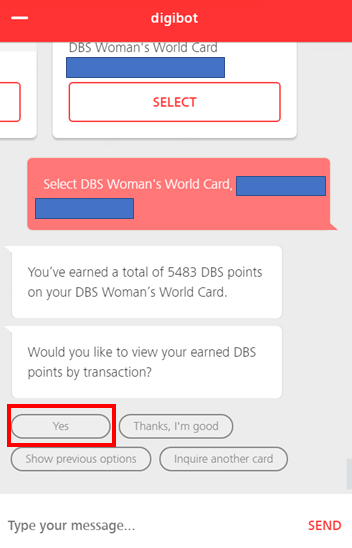 The screen will now start to populate with your most recent transactions and rewards points awarded. You can click “see more” to view additional transactions. 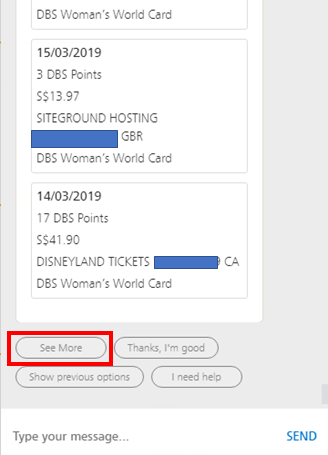 It’s easy enough to reconcile FCY transactions, because the DBS Woman’s World Card awards the 1X base and 2X bonus points at the same time. This will be broken into two transactions, as you see in the screenshot below: 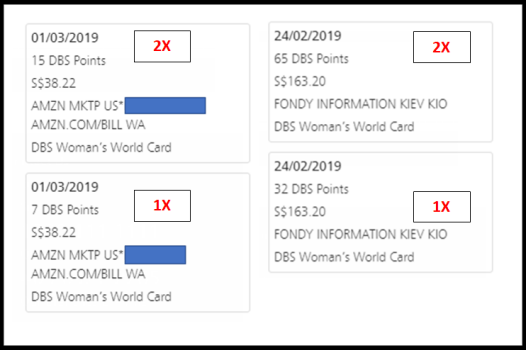 It’s somewhat more difficult to reconcile the online transaction bonus, because the remaining 9X/7X points come in a lump sum on the 16th of the month after. This is what the bonus points entry will look like:

Granted, since the bonus is a lump sum figure, you still have your work cut out to figure out exactly which transactions did and did not earn the bonus 7/9X. But compared to before where you’d have to check transactions line by line with the CSO, this is a significant improvement.

Now, some people (including me) will not be able to find the bonus points entry. I’ve spoken with customer service, and apparently this can happen if you’ve received a replacement card in the past. My previous DBS WWMC was cancelled because of a fraudulent transaction, and now my base points are credited to my new WWMC, but my bonus points are credited to my old WWMC (which still exists in the system, but can’t be used for transactions).

My overall points balance is still correct, but because the Virtual Assistant only shows points on cards that are currently active, I can’t see my bonus entry online. It’s a very, very strange way of doing things, but suffice to say, if you don’t see any bonus entry, this may be the reason. The CSO told me this “can’t be fixed”, but I’m going to try my luck with HUCA.

MCCs are another perennial headache- is Jones the Grocer a restaurant, or a grocery store? Is Imperial Treasure Crowne Plaza a hotel, or a restaurant? This is an issue even if you don’t use DBS cards, because many banks award points bonuses based on MCCs.

Fortunately, DBS will now tell you in black and white the MCC of each transaction. Start up the DBS Virtual Assistant again (or if you’re using it already, type “start over”). This time, type “credit card transaction inquiry”, then click “view my transactions” 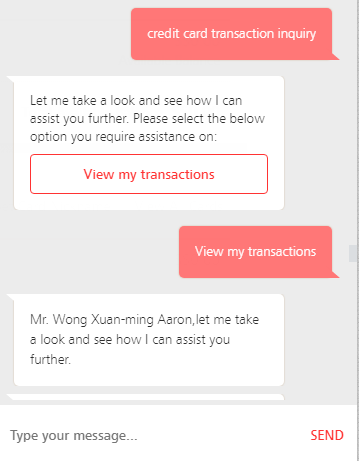 You’ll be shown a carousel of cards you have. Select the relevant card… 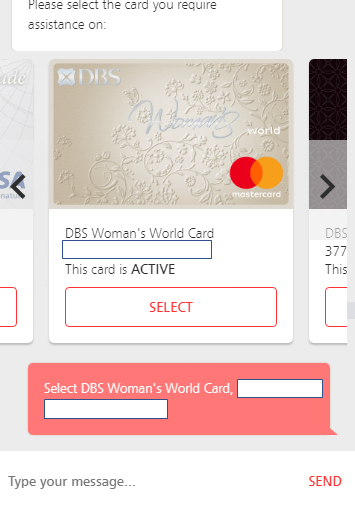 …and click on “view transaction history”, then select “unbilled transactions” or “current statement”. 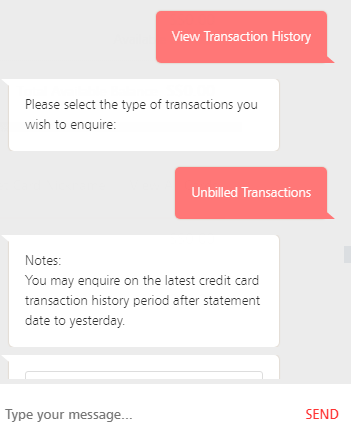 That’s it. You’ll now see a listing of transactions you made, plus the MCC of the merchant concerned.

Once you know the merchant category, you’ll be able to look up the four-digit MCC in this guide from Citibank. Keep in mind that DBS may use slightly different nomenclature, but the broad form will be the same. For example, DBS uses “limousines & taxicabs” while Citi uses “taxicabs and limousines”.

DBS must have realised they were burning a lot of precious CSO bandwidth attending  to enquiries from worried points chasers. The new Virtual Assistant functionality isn’t perfect, but it helps deal with the first line of investigation- if your 9X credits flawlessly, then you know for sure that all your transactions met the “online” threshold. If not, well at least you have a starting place to figure out went wrong.

Now that DBS has implemented this, I wonder how difficult it is from a technical point of view to further decompose the lump sum figure on a transaction-level basis. It’s probably easier said than done, but that would be a massive step forward in transparency.

Best news for a long weekend. I just don’t know why DBS doesn’t bother to tell its customers about something so useful. BTW, Imperial Treasures at Crowne Plaza is no more. Pity.

MCC is already a feature, if you use lifestyle app to check the transaction.

Rewards per transaction is good.

However, I did not get bonus points from Comfort App booking last month. Maybe need call them

The category shown on lifestyle app is not consistent with the MCC code description though.

That’s a brilliant discovery! Thanks for sharing the news Aaron!

thanks to the good people on the telegram group for sharing 🙂

This also allows me to check for transactions that is still pending for settlement!
Thanks for highlighting this!

Hmmm, when i looked at the transactions using the method on your article, i noticed that transactions entries under sgd5 did not accrue any DBS points, i.e. there was no pro-rating.
Is DBS now taking a similar approach like UOB and awarding points per sgd 5 spent only?

Big fan of yours Gali

Thanks for sharing Aaron. DBS seems to have issues calculating the bonus points 9X after dividing by 5 quite often. Do you face this issue often also? And how do you remedy? Thanks Aaron.

Aaron Wong
Author
Reply to  Big fan of yours Gali

not sure i understand your question…here’s a link to a post that explains how bonus points are calculated. does it match what you see?