Some of the most lucrative value in the Avios chart will be devalued on 30 May. Here are some awards you may want to lock in now.

British Airways has announced that it will be increasing the number of Avios you will need for award bookings made with their partner airlines. These include oneworld partner airlines (i.e American Airlines, Japan Airlines,  Qatar Airways) and other partners such as Alaska Airlines.

The increase in Avios needed for award bookings will be effective for bookings made on/after 30 May 2019.

British Airways has been rather generous in the notice period that they have given to its Executive Club members. For all bookings made between now and 30 May 2019, you will still be booking Avios partner awards at the current price level.

However, any changes to your award booking made after 30 May 2019 will be charged at the new Avios redemption rate. If you change your flight date after 30 May, you will have to top-up the difference in Avios needed for that flight.

Here are the airlines which will be affected by the higher award pricing: 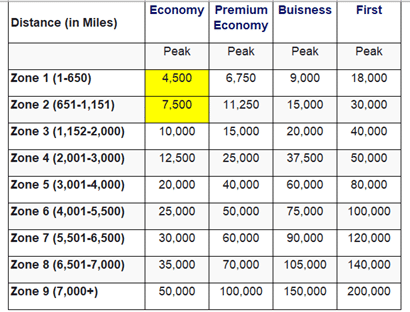 Summer and Zach from The Points Guy have gotten data through the British Airways call centre that this will be the new British Airways award chart for the affected partner airlines from 30 May 2019, of course at this point this is still “unofficial”:

At a glance, the devaluation will be hitting the shorter distances zones the hardest with Zone 1 awards seeing a 33% increase in the number of Avios you would require for an award ticket in Economy and close to 40% for Business and First Class flights.

We have covered some of the sweet spots of the British Airways Executive Club program here in 2017 and a more recent piece by Aaron last year. Here are some awards which I think you should lock-in before 30 May 2019 :

One of the best uses of Avios is for short-haul economy class flights. There are many cases where you can extract great value in an economy class award through Avios.

Here are some examples:

Intra-Japan domestic economy class awards are one of the few awards which have excellent value. You are able to redeem a one-way domestic Economy Class ticket within Japan for just 4,500 Avios and ~ S$4 in taxes:

Yes, I am fully aware that you are able to purchase a JAL explorer pass which can cost as low as JPY 5,400 (S$66) for a one-way domestic flight in Japan. However, I still prefer to keep my cash spending low especially if I’m sitting on a decent haul of miles.

The cost of these awards after 30 May 2019 will be priced at 6,000 Avios one-way which would certainly make me consider purchasing the JAL Explorer Pass instead.

Another excellent example of a great redemption deal would be intra-Australia/New Zealand flights with Qantas. There are a few great awards which I feel are of great value.

For a shorter flight between major cities of Brisbane and Sydney for example, these awards are priced out at 4,500 Avios + S$22 in taxes one-way in economy class which is still great value in my opinion. Again, if you were to book this award after 30 May, it will cost you 6,000 Avios up from just 4,500 Avios.

If you are looking at making the hop over from Australia to visit Middle Earth (New Zealand), you’ll be glad to know that economy class flights are currently going at 10,000 Avios + ~S$115 in taxes one-way between Sydney and Auckland. If you’re thinking of splurging on a Business Class ticket, this will only cost you 20,000 Avios and the same amount of taxes.

After 30 May 2019, economy class awards between Melbourne/Sydney to Auckland will be priced at 11,000 Avios and business class awards will set you back 22,000 Avios.

Qantas plies their A330-300 featuring their Business Suites cabin on select routes within Australia and New Zealand which includes the Sydney – Perth, and Melbourne -Auckland route. So if you’re heading Down Under anytime soon, it’s best to lock in these great value awards.

While we recognize that the devaluation will not be affecting British Airways flights, there are some other nice redemptions within Europe which are available for a good price with Avios.

One of them is Finnair’s flight between Helsinki and London Heathrow. Finnair flies their A350-900 between HEL and LHR daily and a one-way business class award will only cost you 15,000 Avios + ~S$90 in taxes with economy class awards coming in at 7,500 Avios one-way. A great deal considering that the flight is blocked at 3 hours. Finnair also flies their slightly dated A330 between HEL and LHR as well and on both the A350 and A330 you will be treated to a lie-flat bed, a luxury for intra-Europe flights.

Ever since Asia Miles revamped their Asia Miles program with the carrot of “20% more award seats”, I simply have not been able to find any award seats available for medium-haul flights to North Asia (Seoul, Tokyo). However, if you do search for flights to Seoul on the British Airways website, you see that there is an abundance of flights for you to choose from in Business Class and the occasional First Class.

Here’s are just some of the available Cathay Pacific flights being shown on the British Airways website which are 100% bookable as I have secured an award myself recently with Avios: 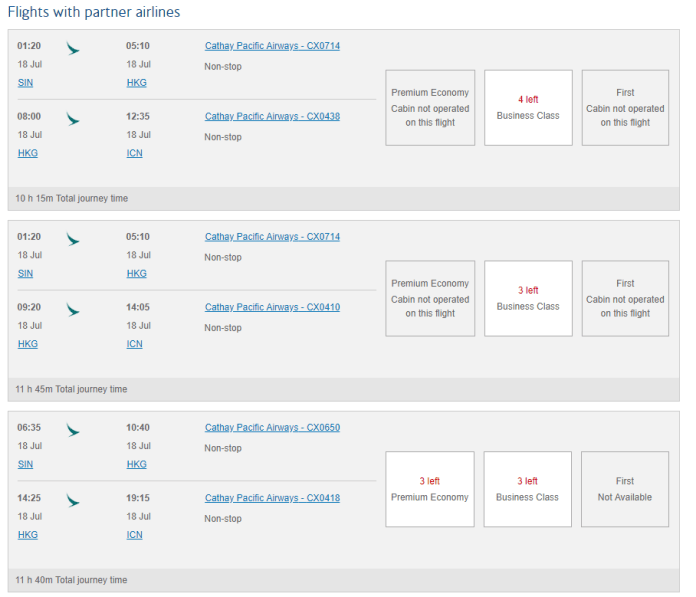 Your eyes are not playing tricks on you, you are able to redeem flights more easily on Cathay Pacific through partner airlines than its own program. Granted if you are a Marco Polo Club Elite member, I’ve been told that you’ll be able to call in to get them to release some seats for you but that’s an additional step that you have to do which is certainly frustrating especially as an elite member.

Aaron has covered these in great detail in his post here where he details some economy class awards which yields better value when redeemed with Avios. One example is the Singapore – Perth route on Qantas where a return economy class ticket will only set you back 25,000 Avios + ~S$150 in taxes. Come 30 May 2019, you will need to burn 26,000 Avios for the round-trip.

An even better redemption, in my opinion, is for Sri Lankan airlines flights between Singapore and Colombo. For the uninformed, Colombo is another great city in which you are able to find cheaper premium cabin flights to Europe and North America. A return economy class redemption ticket between Singapore and Colombo will cost you 20,000 Avios + ~S$325.60 in taxes, although you might be able to find cheaper revenue tickets on certain dates. This will cost 22,000 Avios from 30 May 2019.

While it’s definitely sad to see Avios being devalued, it was definitely coming sooner rather than later as these low award prices for partner awards probably wasn’t sustainable to British Airways. The awards which are hit the hardest are those which fall in Zones 1 and 2 which sees the highest increase in award prices. The increase for other zones are quite minimal in my opinion and should still give massive value.

British Airways Avios are obtainable from Citibank and American Express and transfers normally take 3 working days from Citibank, so you will still have sufficient time to transfer some Avios from your credit card for an award booking before 30 May 2019.

Matthew Chong
Addicted to luxury travel while trying not to go broke, Matthew is always on the prowl for the best deals in the travel industry. When he's not busy studying, he can be found trawling the internet and reading up on credit cards, airlines and hotels. He also wouldn't mind taking you out on a date.
Previous article
Link UOB PRVI Miles, Visa Infinite cards to KrisFlyer UOB account and earn a bonus 6 mpd (but…)
Next article
Hilton Honors “Go More, Get More”: 2X points on all stays and more

SIN-PER economy redemption is a bit high even in the old price, right? Normal peak season ticket will not cost S$600 if you buy it early.

This is great, but wasn’t this last week’s news, Matthew?

it was announced last week, but you can still book awards at the current price now.

Of course not, Sien.

Coming from the UK, I’ve been reading about this unfortunate news extensively. The fact that cheaper, short hops on CX will soon be a thing of the past is disappointing. I’m just merely surprised about the timing of this news here.

meant to cover it last week, but got busy. the good news is you still have time to lock in your bookings. it’s unreal that BA hasn’t even unveiled the official award chart.