PSA: Your SCB 360 Rewards points have a shorter validity period than you think.

Most people think that Standard Chartered 360 Rewards points have an expiry of 3 years. After all, that’s how the bank itself portrays it:

Dig deeper into the T&Cs of the Standard Chartered Rewards program, however, and you’ll come across this term:

This suggests that your points aren’t valid for 3 years; they’re valid for a maximum of 3 years. In other words, when you open an SCB card account, a 3 year countdown timer starts. All the points you earn during that initial 3 year period will expire on the same date, regardless of when they were actually earned.

I felt so certain I had misunderstood this that I raised the matter with SCB customer service. They confirmed I’d read the clause correctly (I asked them to escalate the question for good measure)- your points are valid for a maximum of 3 years. 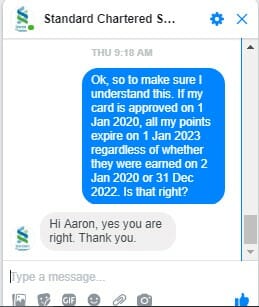 Why it probably won’t affect you

The good news is that this punitive policy won’t affect most miles chasers with SCB cards. If you’re playing the miles game with an SCB card, I’d wager that it’s the SCB Visa Infinite. Points earned on the SCB Visa Infinite card (either the Priority Banking version or the “regular” one) do not expire.

Instead, this policy affects anyone who holds a SCB Platinum Visa/Mastercard or an SCB Rewards+ card. But both these products are anyways so underwhelming that it’s unlikely a serious miles chaser would be regularly using them.

What can I do if my SCB points are going to expire?

We’re purely in the realm of the hypothetical here, because I’m sure well-informed Milelion readers wouldn’t be in this situation 😉

But for the sake of completeness, here’s what you can do if you’re an SCB cardholder with points that are going to expire. 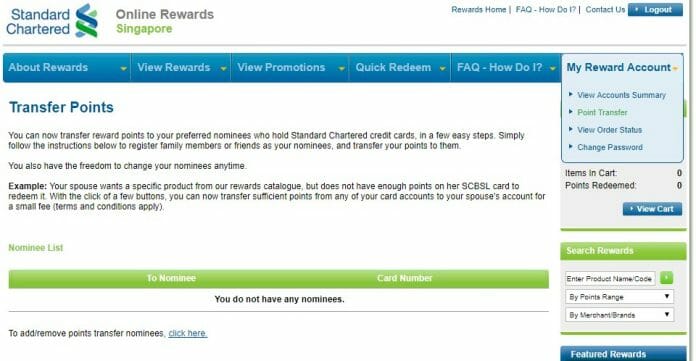 SCB is one of only two banks in Singapore (the other being OCBC) which lets you transfer credit card points to another customer. A fee of S$10 is charged for every 100,000 points transferred (no fee is applicable for SCB Visa Infinite cardholders). The transfer can be made online at the SCB Rewards portal- click on My Reward Account–> Points Transfer. You’ll be asked to add a points transfer nominee list, and can add up to five nominees. 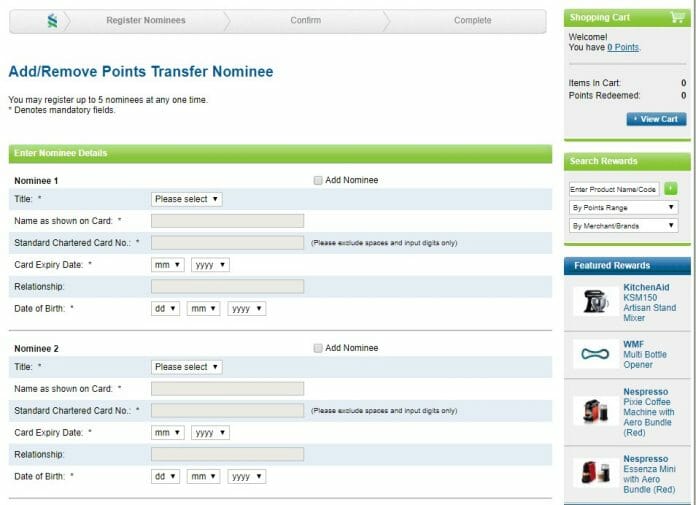 I was wondering why Standard Chartered would adopt such a customer-unfriendly policy when I remembered something: they aren’t the only bank who does this.

Back in May 2018, Louis wrote about Citi’s odd expiry policy. The common wisdom goes that Citi ThankYou points earned on the Citi Rewards Visa/Citi Rewards Mastercard are valid for 5 years. That’s pretty much what Citi says on its website anyway…

And yet, that’s not true either. In the Citi T&Cs you’ll find this clause:

…suggests that Citi Rewards points expire every 5 years (with a 3-month grace period) starting from card approval, not when the points are earned!

(I can’t explain why I have 159 and 21,070 points that expire on 25 May 2020 and 31 Jan 2021 respectively, but apparently I’m not alone. Most people with Citi Rewards cards will see one big chunk of points expiring 5 years 3 months after card opening, with a few miscellaneous smaller amounts expiring on different dates)

You can argue that Citi’s policy is slightly better than SCB’s because at least there’s a three month grace period. This means that the shortest expiry of any Citi points is three months, versus one day for SCB.

Remember also that SCB and Citi do not pool points together, so each card has its own “points account”. That’s to say, your non-expiring SCB Visa Infinite/Citi Prestige points will not commingle with your expiring SCB Rewards+/Citi Rewards Visa points.

I have no idea whether this is a technical limitation of SCB’s points system or a deliberate policy, but in any case if you earn SCB 360 Rewards points on a card that isn’t a Visa Infinite, take note!

If you’re curious to know the expiry policy of various credit card points, whether they pool and how much you need to pay to transfer them, please refer to this guide.

Aaron Wong
Aaron founded The Milelion to help people travel better for less and impress chiobu. He was 50% successful.
Previous articleChope celebrating 8th birthday with $500,000 of prizes: play daily to win
Next articleOne day Shopback sale: Up to 12% cashback on hotels and more

Hi! Would you happen to know if transferred points on OCBC to a nominee also follows the nominee’s expiry date?

Those are valid for 1 year

Nicely done – you must have religiously maxed out the 10x categories every month!