Inferior miles earning, a low bonus point cap and the highest foreign currency conversion fee in Singapore. What's there not to like?

Standard Chartered traditionally hasn’t had a strong miles and points card offering for the masses. Its Platinum and NUS Alumni cards offer anemic rewards earning, and the Standard Chartered Visa Infinite card is out of the reach of most people.

So the launch of the new Rewards+ card, on the surface, is a welcome addition to the SCB portfolio with its bonuses on foreign currency spending (10X) and local dining (5X).

The problem is: once you dig deeper, you start to realize the product has some serious shortcomings.

When I saw the Rewards+ earned 5X points on dining, my natural response was to interpret that as 2 mpd. After all, for most other banks, 1X= 0.4 mpd (hence we commonly use 10X to refer to 4 mpd).

But SCB does things a little differently. Here’s the SCB rewards page. Note the two possible conversion rates for SCB points to KrisFlyer miles. The rate on top is for Visa Infinite cardholders only. The rate below is for everyone else, including Rewards+ cardholders. 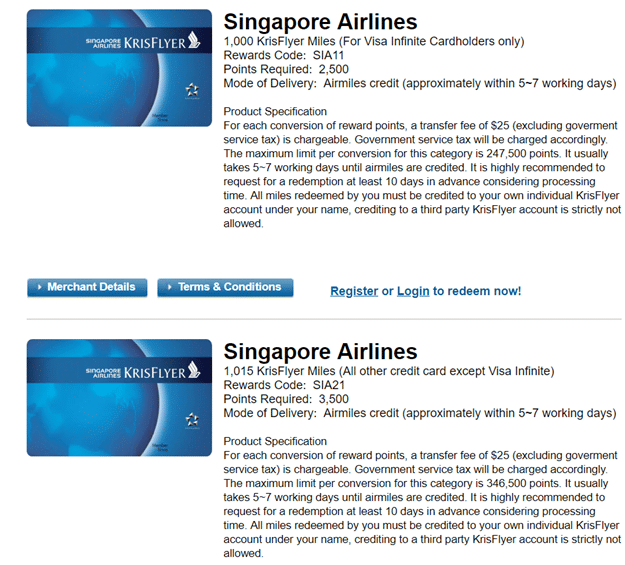 That’s an important realization, because it means 5X points is 1.45 mpd. The SCB Rewards+ card will give you 1.45 mpd on dining transactions made in Singapore with the following MCCs:

The usual exclusions apply- you won’t earn 5X points at hotel restaurants (because these code as hotel spending), bakeries or supermarkets (eg Jones the Grocer).

I certainly wouldn’t use this card for local dining, given that I can earn 4 mpd on dining with the:

Even if I didn’t have any of those, 1.45 mpd is only a marginal improvement over the 1.4 mpd I’d get eveywhere with the UOB PRVI Miles cards. Given that these are now available at the $30,000 income level, there’s really no reason to get the Rewards+ card for dining. This is especially the case if you have other UOB cards, because pooling your points together makes much more sense than creating orphan points in SCB.

10X points on overseas spending without minimum spend sounds promising, but upon further scrutiny falls apart. The Rewards+ card gives 10X points (2.9 mpd) on foreign currency spending, defined as as any spend that is not in Singapore dollars. Online purchases on e-commerce sites like Amazon would qualify, as would overseas physical card swipe transactions.

Assuming you’re overseas and mobile payments aren’t an option (because then you’d use them in conjunction with the OCBC Titanium Rewards/Citibank Rewards), then the Rewards+ card’s main competition is the UOB Visa Signature, which earns 4 mpd on foreign currency transactions (subject to a minimum of S$1,000 foreign currency spend in a statement period).

You could argue that the Rewards+ card’s definition of overseas spending is more generous than the UOB Visa Signature (which has the added requirement that the payment processing be done outside of Singapore to qualify), but when it comes down to brass tacks, 2.9 mpd is way inferior to the 4 mpd opportunities we have.

And I’ve not even come to the worst part yet…

Bonus points on the Rewards+ card are capped at 20,000 per card anniversary year

Here’s the kicker. Even if you could get past the inferior earn rates and the hefty forex transaction fees, your bonus points are capped at 20,000 rewards points per card anniversary year. This means you’d max out your bonus with:

That cap is just ridiculously low for a product entering an already competitive market. That’s just S$185 of forex spending a month, or S$416 of local dining spending.

The T&C give some examples of how the points cap works for someone whose card is approved on 10 May 2018. 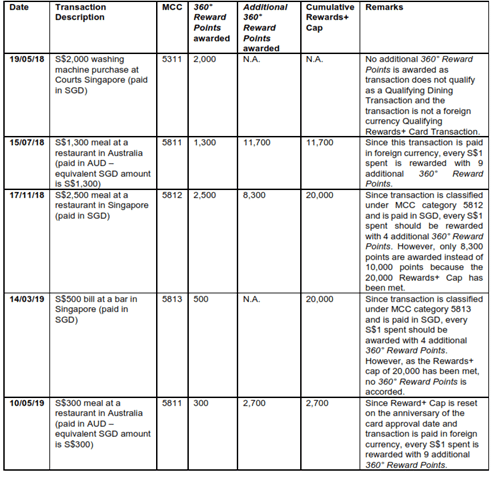 Not to worry, there’s free luggage…

If you’re among the first 500 customers to sign up for a Rewards+ card, you can get a 30-inch American Tourister Luggage Bag worth $210. What’s that you say? No minimum spend required?

As you can see, you’re paying for your “free gift” through deduction of points. In that sense, this isn’t a sign up gift at all. It’s simply another option you have to redeem your points. 5,000 rewards points is 1,450 miles, so in that sense you could argue that a $210 piece of luggage is a better deal, but whatever happened to giving with two hands?

10X points on foreign currency transactions with no minimum spend required makes for exciting reading. It certainly got me excited. I thought we finally had a viable competitor to the UOB Visa Signature card. But the inferior mpd rate, the high forex charges and the low cap combine to make this product ultimately uncompetitive.

I mean, it’s not like this is the only card on the market which allows people to earn bonus points overseas. Suppose I’m overseas. Think about my options…

There’s simply a wealth of options available to you. Why would you settle for the Rewards+?

This product might not be dead on arrival the same way the Krisflyer UOB account was, but I’m certainly struggling to think of use cases. Maybe if you accumulated points with the SCB Visa Infinite, maybe if you liked the design…

I mean if you fit that category, feel free to apply for one. But otherwise, this has to go down as a missed opportunity for SCB to make an impact on the miles and points segment in Singapore.

Hi! If im holding a SCB VI, will the points be pooled for me to enjoy the higher points to miles conversion? In any case, I agree that the low miles earning cap is a major detractor!

someone in the telegram group said SCB VI points could be pooled with other SCB cards. i haven’t checked

my exact same thoughts. If so, then it might be interesting to spend on the rewards+ card and use the SCB VI to redeem the miles…

Yes, the points are pooled. But the cap is simply too low.

and that in a nutshell is how much i dont know about the bonus$aver. updated, thanks!

Bonus interest for Bonusaver account needs to use the Bonusaver Credit/debit card. You can’t use the Rewards+ card anyway. 🙁

Has the foreign currency transaction fee for UOB VS increased to 2.8%? Always had the impression that it was 2.5%.

[…] recently reviewed the Standard Chartered Rewards+ card and wasn’t too impressed with the offering. So why am I listing it here? Because […]

Reminder: 6 days left to sign up for credit cards with SingSaver - The MileLion