KrisFlyer miles aren't limited to just Singapore Airlines- they can also be used to upgrade partner flights. How does this work, and is it a good use of your miles?

What partner airline tickets can be upgraded?

As mentioned in the previous guide, Singapore Airlines has two types of partners:

If you’re holding a ticket on one of SQ’s non-Star Alliance partners (Alaska Airlines, Virgin Australia, Virgin Atlantic, Juneyao and Vistara), then some bad news for you- these tickets cannot be upgraded with KrisFlyer miles.

However, you will be able to use your KrisFlyer miles to upgrade a Star Alliance partner ticket on the following carriers:

Sharp-eyed readers will note that Star Alliance members Brussels Airlines and Copa Airlines are missing from that list, but whether it’s design or oversight is unclear. I’ve never flown on either airline, so I can’t comment on whether this is possible.

What fare classes can be upgraded?

Even if you’re flying on an eligible carrier, not all tickets can be upgraded. You’ll need to refer to the upgrade tables to see if your particular fare class qualifies for upgrading: 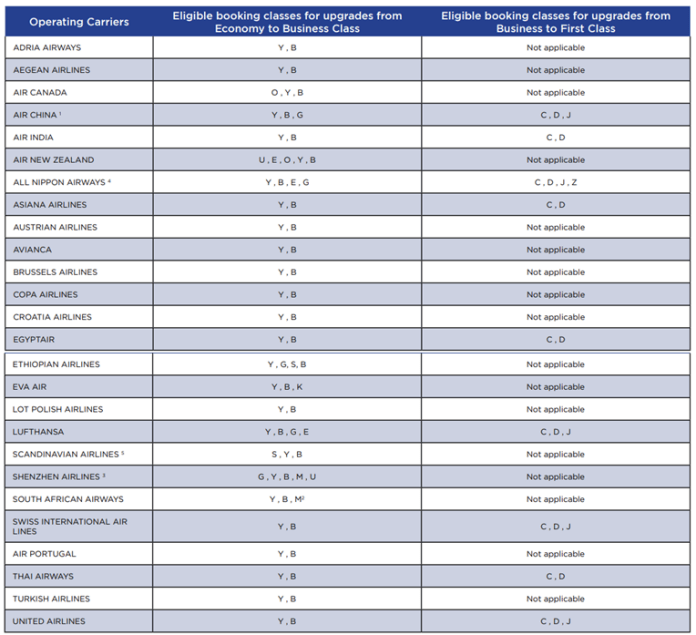 The upgrade eligibility table is somewhat unhelpful, to the extent it suggests that only two types of upgrades are possible:

This may lead to the conclusion that it’s not possible to upgrade from Premium Economy to Business Class- which is strange, because it means people who pay for Premium Economy are penalizing themselves.

Thankfully, that’s not true at all. What KrisFlyer has done is condense both Economy and Premium Economy fare codes into the Economy Class column. Here’s my attempt at reproducing the upgrade eligibility tables, with the fare codes properly split.

You’ll notice that in general, Y and B class Economy fares can be upgraded to Business Class. The problem is- Y and B are the most expensive Economy fare buckets, with prices often approaching that of a deep discount Business Class fare. So unless you’re flying for work where your employer picks up the cost, it makes little sense to purchase an Economy Class fare and then upgrade with miles.

Even if you were so inclined to purchase a full-fare Economy Class ticket, it may be that the desired fare code is simply not offered on a particular route. Look at the example below from Singapore to Bangkok on Thai Airways. Note that even though I’ve selected the most expensive Economy Class ticket possible (Full Flex), the code it books me into is “Q”, which will not be eligible for upgrading. 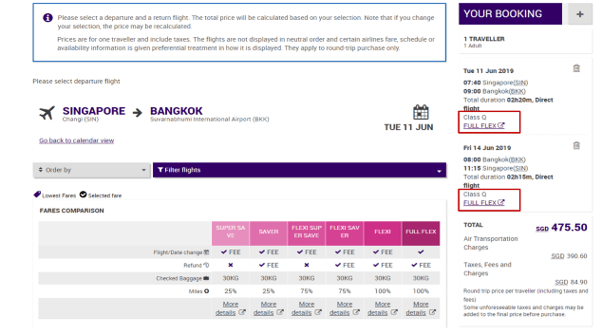 It’s generally much easier to upgrade from Business Class to First Class because discounted Business Class D fares are eligible for upgrading. In this case, the problem has to do more with availability. Only the following Star Alliance carriers operate First Class, and even then, some restrictions about upgrades apply:

Upgrade eligibility has everything to do with the fare class and nothing to do with where you buy your ticket from (e.g. OTA, official airline website, travel agent). Do note, however, that codeshare flights cannot be upgraded.

How much does an upgrade cost?

To determine the cost of an upgrade, refer to upgrade table and find where your origin and destination zones intersect. Do remember that these zones may be different from the Singapore Airlines award chart; for example, Singapore Airlines splits the USA into West and East coast, but the whole of the USA is under a single zone in the upgrade chart. 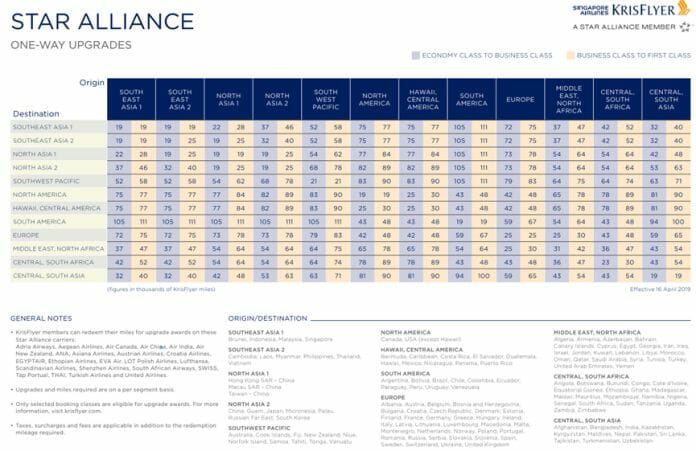 It is not possible to use KrisFlyer miles to upgrade from:

Is upgrading Star Alliance partner tickets a good use of KrisFlyer miles? 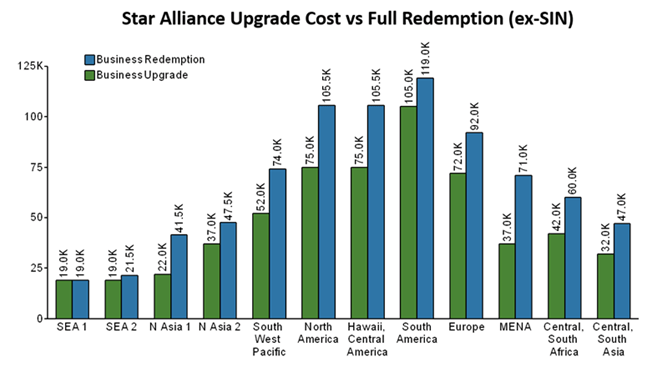 The numbers aren’t kind. It’s pretty staggering to note that in some cases (e.g SEA 1 & SEA 2), the number of miles needed to upgrade a ticket is the same/almost the same as that for an outright redemption!

Even if you look at other zones, the value generally isn’t there. On average, an upgrade requires 75% of the miles for an outright redemption. Keep in mind that you’ll also have to purchase a very expensive Economy Class fare, which means that the use case for upgrading a ticket just isn’t there (unless someone else buys your ticket for you).

How do I find partner award space?

As mentioned previously, the KrisFlyer website is not the best place to search for Star Alliance award space. Instead, consider using United MileagePlus, ANA Mileage Club or Air Canada Aeroplan for a more complete picture.

As a side point: don’t get confused by the 67,500 miles figure you see in the screenshot above. That’s not relevant to us; it’s the price an Aeroplan member would pay to redeem this ticket. Remember: we are using the Aeroplan website to search for availability, not pricing. The pricing will follow the KrisFlyer Star Alliance upgrade chart.

How do I upgrade a ticket?

Partner upgrades cannot be done on the Singapore Airlines website, so once I’ve found the award space I’ll need to call up KrisFlyer membership services.

I’ll let them know that I want to upgrade a Star Alliance revenue ticket, give them my e-ticket number and the dates of travel, and they should handle the rest. It’s a generally painless process, but do remember to double-check the miles they quote against the award chart.

In most cases, there should be no additional taxes payable because the airport taxes payable on an Economy (or Business) Class ticket should be the same as a Business (or First) Class ticket. However, there are certain jurisdictions which adopt a different practice. For example, the UK applies a higher rate of APD (Air Passenger Duty) for Business Class tickets compared to Economy Class ones.

Upgrades can be neat. I once managed to experience the Lufthansa First Class terminal for a mere 28,000 KrisFlyer miles by upgrading a Lufthansa Business Class Frankfurt to Riyadh ticket. That price has since increased slightly to 30,000, but it’s still a great opportunity if you happen to find yourself in that part of the world with a revenue Business Class ticket.

On the whole however, you won’t really find yourself using the partner award upgrade feature all that often. It’s good to be familiar with how it works, but you’ll find the use cases to be very limited.

Aaron Wong
Aaron founded The Milelion to help people travel better for less and impress chiobu. He was 50% successful.
Previous article
UOB keeping PRVI Pay fee at 2% until end of 2019
Next article
New AMEX offer: Get S$150 back on S$600 spent at selected Marriott Thailand properties