Chope is shutting down all redemptions until November 2020. You can still earn Chope$ on reservations, but you won't have anything to spend them on.

Despite everything that’s going on, this still caught me off guard. 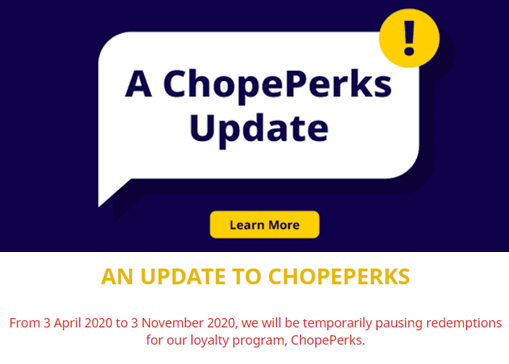 Chope has announced that it will suspend all ChopePerks redemptions from 3 April to 3 November 2020, with the exception of charity/non-profit partners. The redemption catalogue now shows only two options: 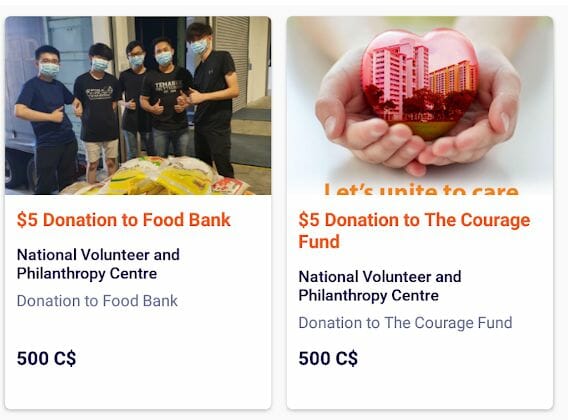 Chope users will still be able to earn Chope$ on any fulfilled reservations during this period, and any ChopePerks rewards issued before 3 April 2020 can still be used at the respective merchants.

Due to the suspension, Chope will also extend all Chope$ that are expiring before 1 January 2021. More details will be provided at a future date.

Why is this happening?

Chope says that redemptions have been paused to help its restaurant partners, but let’s not be disingenuous here- it’s very much in Chope’s interest too.

With dining out volumes way down, Chope’s financial position must have taken a pummeling over the past few months, and suspending the redemption of loyalty points gives them some breathing room.

On first glance, the decision to suspend redemptions kind of makes sense. Chope’s redemption catalogue has been whittled down to the point where the only plausible redemptions are ChopeDeals codes and KrisFlyer miles. With the Covid-19 situation, few people are dining out, much less flying.

But it’s the duration of the suspension that surprises me. I could understand if Chope were hitting the pause button until 4 May, when the current “circuit breaker” measures are due to end. However, Chope has suspended the program for a full six months. Heck, even the airlines haven’t cancelled their schedules that far ahead.

Moreover, restaurants will still remain open during this time for take-away, so it’s not like Chope redemptions would be totally useless. And since people can’t dine in anyway, there’s no social responsibility aspect to suspending redemptions either.

In any case, the decision’s been made, and all we can hope is that Chope decides to resume the program sooner rather than later.

The duration of the suspension suggests to me that there’s more than meets the eye, and perhaps the bigger existential question is whether Chope will even survive the next few months. Its fate is directly tied to that of restaurants, and if business doesn’t pick up…well, let’s just say I wouldn’t want to have a huge Chope$ balance right now.

I’ve anyways disinvested myself from the ChopePerks program ever since it was devalued with virtually no notice in October last year, so I don’t have much at stake here. I wish them all the best, but I wouldn’t be counting on a Temasek-style lifeline if it came to that.

I reckon It’s suspended for 6 months because sadly some restaurants won’t be open again after this shutdown periods. it will be extra hassle to do the refund and stuff.

Redeemed a number of vouchers before the devaluation, and now left with quite a lot and not sure if can use. Any thoughts what I should do?

Chope offered to give discount code of the amount paid + points redeemed (valid for 90 days), but if ChopePerks is suspended for 6 months, no point right?

To be fair – they did say that they would try to re-open earlier if they could. Could be expectation management rather than to have to keep posting extensions.