Is there any value left in the ChopePerks loyalty program?

Chope nerfed its rewards program in November last year. What's the best use of Chope-Dollars now?

These were terrible changes, and ChopePerks ceased to be a rewards program, at least in the traditional sense of the term. Instead, it became more of a discount scheme, where the best you could hope for was to save some money off a future meal, instead of getting one for free.

The worst part of the devaluation? The eDM announcing it came wrapped up in a huge “WE HEARD YOU!” banner.

Really, you can’t make this stuff up.

What can you redeem your C$ for now?

When companies devalue loyalty programs, they sometimes try to spin it by saying “yeah, but look at all these cool new places where you can redeem your points!”

What’s surprising, then, is that the ChopePerks rewards catalogue has actually gotten a lot smaller. I distinctly remember there being more options in the past, like vouchers for Agoda, Sephora, HipVan etc. Perhaps we’ll see them added back in the future, but as of right now, the rewards catalogue is a lonely place to be. 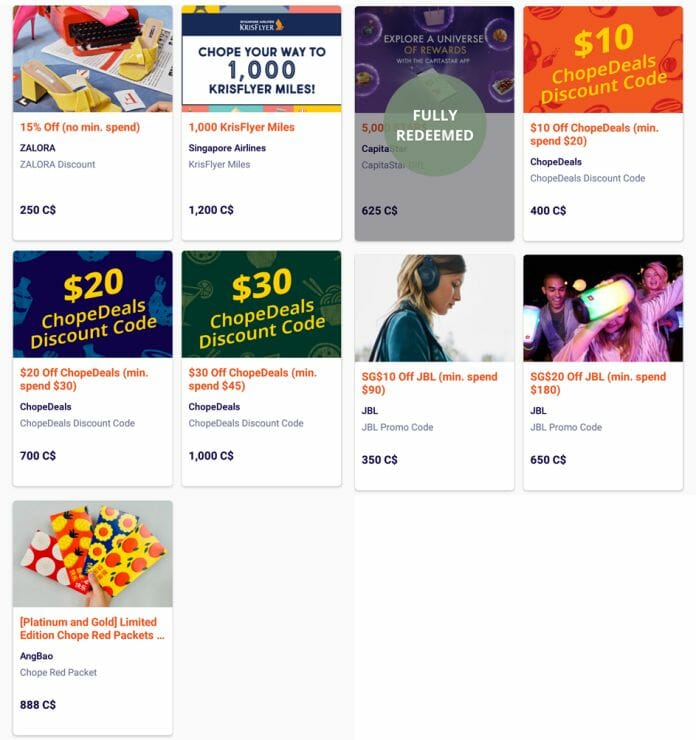 I’m not even going to talk about that last one, because if you’re the kind of person who drops 888 C$ on some “limited edition” Chope red packets (no postage included, you’ll have to go down to Chope HQ to pick them up), you need your head examined.

Instead, let’s examine the other options. 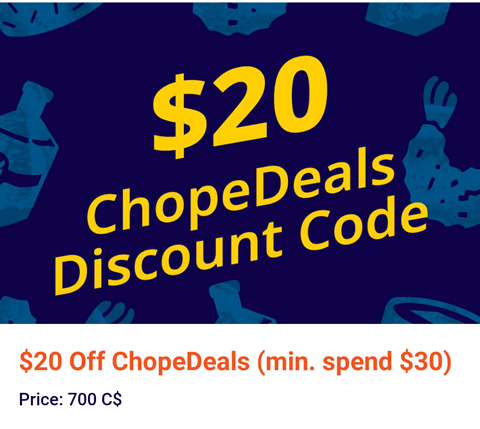 That was certainly the case in the past, but ever since the November devaluation, it’s become a bit more complicated.

Here’s the three ChopeDeals discount code denominations, their cost, their minimum spend and the effective cash co-pay. For example, I can’t use a S$10 ChopeDeals code without spending at least S$20, so I’ll be S$10 out of pocket on this redemption (the co-pay).

Under the new system, your C$ still command the same monetary value…but with a minimum spend requirement. Although it’s mathematically true that spending 400C$ for a S$10 ChopeDeals discount code still works out to 2.5 cents per C$, you’d have to be deliberately obtuse to say it’s the same as before.

It’s clear that the added minimum spend requirement constitutes a devaluation. The problem is pinning down just how much of a devaluation it is. If you already planned to spend S$50 at restaurant X, found a “Pay S$45 for S$50 of credit” offer on ChopeDeals, and redeemed a S$10 code to buy it, I suppose you might take 2.5 cents per C$ as your value.

However, if the fixed denominations make you spend more than you otherwise would have, or if your choice of restaurant is artificially constrained by what’s available on ChopeDeals, then you need to account for that somehow.

Frankly, it’s more philosophy than maths, and I can’t be bothered to get into the nitty gritty details. Let’s just say that the value of C$ when redeemed for dining is now less than 2.5-3.0 cents per C$. 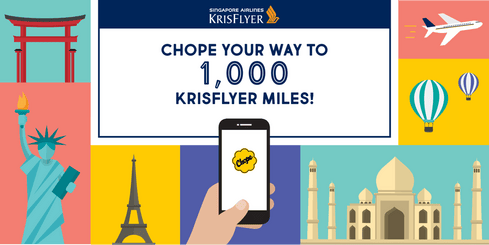 I’ve always been lukewarm about redeeming C$ for KrisFlyer miles, because there’s no shortage of ways to earn them in Singapore. In any case, the maximum miles you can redeem in a year is a paltry 12,000, and while every little bit helps, it’s clearly not going to be a significant contributor to your stash.

You can take this option if you’re desperate for miles, but otherwise you’re better off sticking to dining rewards, even with the nerf. 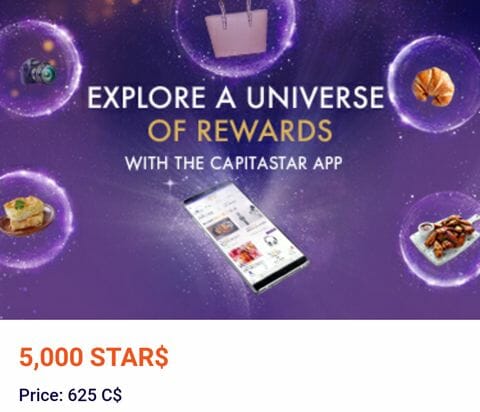 This redemption no longer shows as available in the catalogue, but we can take a quick look at it for completeness’ sake. Redeeming 625C$ gets you 5,000 STAR$, the rewards currency of CapitaLand. 5,000 STAR$ gets a S$5 shopping voucher, so the value is 0.8 cents per C$.

Even if this were still available, it’d be a raw deal.

Chope’s rewards ecosystem has shrunk to the point where the only third party discount codes available are for JBL and Zalora.

The 15% off Zalora code doesn’t have any minimum spend, but when Zalora’s giving out discounts left right centre, do you really want to spend points on something you could get for free?

So I really can’t say you get any value by redeeming these. Spending your C$ here is as good as throwing them away.

It seems that the best use of C$ is still redeeming them for dining rewards- but that speaks more to how sub-par the rest of the redemption options are.

What are your alternatives to Chope?

Even if you hate what Chope has done to their loyalty program, the problem is there isn’t really anywhere else to run to.

The only other dining reservation rewards program I’m aware of in Singapore is Quandoo.

You earn 100 points per reservation (+25 if you write a review), and 1,000 points can be redeemed for S$15 of cashback. This is the equivalent of getting S$1.50 per reservation, but any program with 9 steps to redeem a reward isn’t adopting what I’d call best practice.

Where it gets a bit more interesting is that Quandoo partners with ShopBack, allowing you to get S$5 (limited time, normally S$4) for each fulfilled reservation. That’s way more compelling than its rewards program, and something I’d take a closer look at the next time I have a reservation to make.

I don’t have any personal experience with Quandoo so I can’t speak to how good their tracking and/or customer service is, but I’d certainly take S$6.50 per reservation over 100-175C$.

As bad as the ChopePerks devaluation was, I realised it didn’t actually change my booking behavior.

At the end of the day, Chope still has the widest network of restaurants, and its interface is simple and easy to use. I default to it out of convenience now, rather than in the hope that I’ll earn something nice in return. Perhaps that’s the ultimate goal of a loyalty program: to foster such habitual use that the removal of incentives doesn’t lead to a loss in customers.

On the other hand, however, the fact that I’m not invested in ChopePerks means it loses its ability to influence behavior. And that’s not a good thing for a reservations app.

After all, Chope isn’t useful to restaurants when it facilitates things that would anyways have happened. If I was always intending to make a reservation at Restaurant X, it loses money when I book through Chope (for argument’s sake let’s ignore the logistical and data benefits of an outsourced reservations system) instead of direct.

Chope is most valuable to restaurants when it encourages what’s known as “discovery”, bringing in incremental customers who would not have otherwise considered dining there. They historically did this by offering bonus C$ at certain restaurants, but with the nerfed program, just how persuasive are C$? If Chope offers, say, a bonus 300 C$ for dining at Restaurant X, I’m a lot less motivated to go out of my way to try it as I might have been a year ago.

So I still use Chope for my routine reservations, but I view the C$ earned as a pure bonus, rather than something that nudges my behavior.

The “new and improved” ChopePerks program has slipped off my radar, on account of how dismal the earn and burn proposition now is. That said, if you’re still raking in the C$ I reckon you’re best off using them for dining rewards, assuming they’re places you would have eaten at anyway.

Otherwise, do see if you can rake in some cash through using Quandoo and ShopBack, or just book through eatigo and enjoy the upfront discounts.

Making a purchase through any of the links in this article may generate a commission that supports the running of the site. Found this post useful? Subscribe to our Telegram Channel to get these posts pushed directly to your phone, or our newsletter (on the right of your screen) for the latest deals and hacks delivered to your inbox.

Personally, after the Chope devaluation, I have been using Quandoo with Shopback (when it is upsized to $6 to $8) as well as Quandoo with Rebatemango (337 Upgreat Points initially but now 247 Upgreat Points) with each reservation. Utilising the stack platform and 90N, 247 Upgreat points will be about 150 Travel$. So every reservation gets at least 150 miles regardless of spent amount. Even though the steps required to redeem for Quandoo is not as streamlined, the great thing about it is that even for points redemption reservations, it is possible to double dip with Shopback or Rebatemango as… Read more »

some great ideas here- i forgot about the UPGREAT route, but you’re right, the conversion rates are very favorable

Awesome, love how you’re covering this too (i guess airmiles is still a redemption option), but you may think of creating another brand in the future – saverlion / financiallion and cover discount / financial topics. I would definitely read your analysis on these topics. always spot on.

thank you! one -lion is all i can handle, but so long as it’s loyalty program related i consider it within the same wheelhouse (eg grabrewards, chope, capitastars)

Air miles is no longer available to redeem. It’s been quietly removed.

Tried using Quandoo after the Chope’s devaluations of their programme, but had several terrible experiences, so wouldn’t recommend. First of all, most of the restaurants I tried booking had a “request reservation” option as opposed to having it confirmed on the spot, and I either got either no response or when it was confirmed, restaurant didn’t have the booking when I showed up. On the one booking that I got successfully, I was allocated to an outdoor seat instead of one indoor like I requested, and when I asked the server she said priority is given to non-Quandoo bookings. :/… Read more »

Interestingly. I’ve had restaurants cancel my Quandoo reservation after I’ve arrived. Still served but they don’t pay quandoo the booking fee and I didn’t get points

Logged in to Chope today to find out that the option to redeem for KrisFlyer miles I had been quietly removed. Pour one out for Chope Rewards.