Rumour: Circles.Life planning to launch miles card with up to 3 mpd, no FCY or transfer fees

Could Circles.Life's proposed miles card shake up the market? It certainly looks intriguing...

Could the next miles card on the market come from…a digital telco? That’s what Circles.Life seems to be hatching, based on a survey that was recently sent out to selected customers. 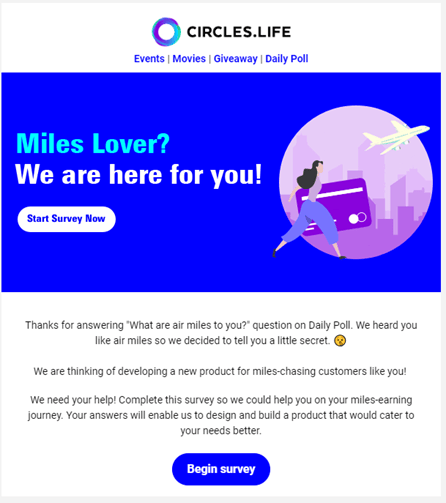 I wasn’t aware that Circles.Life was in the running for a digital bank license, but then again, 21 applications were submitted, and not all the identities of the applicants are known. Based on the survey, it seems like they’re looking to launch within the next 3-6 months.

What does the survey ask?

The survey begins by asking customers whether they currently have a miles-earning credit or debit card, and whether it’s their preferred card for local & overseas spending. 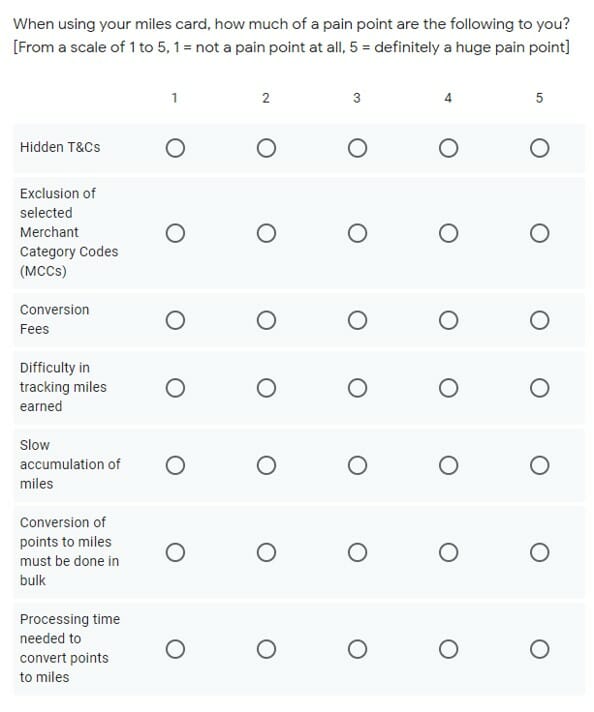 …and what features would improve their experience. 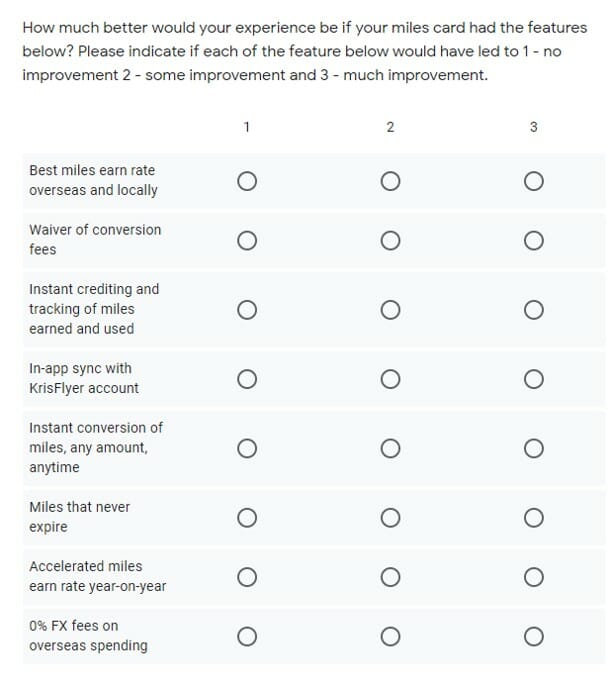 Brief interlude: Am I the only one who finds this survey really badly written? If you offer features without trade-offs, naturally everyone wants the highest miles earning rate, no conversion fees, instant crediting, non-expiring miles, and 0% FX fees. Oh, and it should make me coffee and whisper reassuring words in the dark of the night.

This survey is crying out for conjoint analysis, where respondents are asked to trade-off different attributes. This then reveals their relative preferences, and provides much more useful data than a survey which simply shows that everyone wants everything. Real life is all about trade-offs- what’s the point in knowing that people want the best of all worlds?

Seriously, I hope they didn’t pay an agency to write this…

What will it feature?

Circles.Life spells out the value proposition of their proposed miles card, and asks customers if they would consider getting it in the next 3-6 months.

Circles.Life calls this a “suave” miles card, so I’m going to take them up on their marketing spiel and refer to it as The Suave Card™ for the rest of this post (quick- go domain squat).

The Suave Card™ is not a credit card. There’s no minimum income requirement, it requires topping-up, and the monthly and yearly spend limits (same as the GrabPay Mastercard) reflect the MAS-imposed regulations for stored-value facilities.

An earn rate of 1.5/3.0 mpd on local/overseas spending would certainly put The Suave Card™ up there among the highest general spending cards in the market. A 0% FCY fee only sweetens the deal.

Circles.Life proposes offering 2 mpd on all local spending throughout the duration of the travel ban, which I take to mean the current MOH advisory against all travel abroad. 2 mpd on all local spending isn’t exactly unprecedented- we saw it on the BOC Elite Miles when it first launched (and of course, there was 8 mpd during that Apple Pay promotion). That said, it’d certainly shake up the market.

The Suave Card™ will offer direct crediting of miles earned, with no transfer fees and no minimum blocks.

I like what I see so far. What’s the catch?

How much will it cost?

Circles.Life then reveals its pricing plan.

The Suave Card™ will not be free; it’ll be an add-on to a Circles.Life subscription with a proposed price of S$30/month. Let’s assume that figure is after GST (although I have a sneaking suspicion it’ll be before).

Here’s how The Suave Card™ would measure up to other general spending cards:

The key advantages The Suave Card™ offers over traditional miles cards is:

However, unless you’re making a lot of overseas transactions, or transferring miles several times a year, you’d need to spend a fair bit to earn enough miles to justify the annual fee.

A S$360 annual fee would make The Suave Card™ significantly more expensive than any other general spending card out there- even more so when you consider that the OCBC 90N, DBS Altitude, and Citi PremierMiles all give 10,000 miles when you pay their S$192.60 annual fee. Moreover, all these cards come with the first year’s fee waived, and in my experience, it’s not difficult to get them waived in subsequent years too.

This makes me think that those who qualify for regular miles cards wouldn’t be too interested in The Suave Card™.

However, it could be attractive to students and retirees, or freelancers who don’t earn a regular enough income to qualify for a bank-issued miles credit card. It might also attract a segment of travelers who are disgruntled with the banks’ ever-increasing FCY fees.

But why are we talking about The Suave Card’s™ annual fee in the first place? The subscription fee is charged each month, with no lock-in period. I could see users subscribing to it temporarily during months when they travel- since there’s direct crediting and no minimum conversion, there’s no question of orphan points.

You’re basically paying S$30 to earn 3 mpd overseas with 0 FCY fees. Depending on what your usual overseas spending card is, you could potentially do better with The Suave Card™ for very modest amounts of spending…

That to me is the true use case for The Suave Card™- a short-term subscription miles tool, used only when traveling.

I’d be genuinely surprised if Circles.Life goes ahead with their 3-6 month launch window, given how weak the market is for travel right now. I know for a fact that several banks have pushed back card refreshes because of the current climate, so this would be breaking the trend in a big way.

It’s also important to remember that nothing’s set in stone yet, and it’s entirely possible the final product may be very different from what’s shown to focus groups.

All things considered though, I’m all for a Circles.Life card if it puts pressure on banks to scale back their FCY and miles conversion fees- things you think should be vanishing as technology improves.

Would you get The Suave Card™  if it launched as described?

Aaron Wong
Aaron founded The Milelion to help people travel better for less and impress chiobu. He was 50% successful.
Previous articleIs it worth paying the annual fee on premium credit cards right now?
Next articleEarn bonus ALL points for takeaway dining from Accor Hotels during Circuit Breaker

Could you add a row on the table to compare it to UOB VS?