The American Express KrisFlyer cobrand credit cards may not have the highest miles earning rates on the market, but they do have some of the best sign-up bonuses.

The last round of bonuses lapsed on 30 April, and AMEX has announced a new set valid for approvals between 1 May and 30 June 2020. 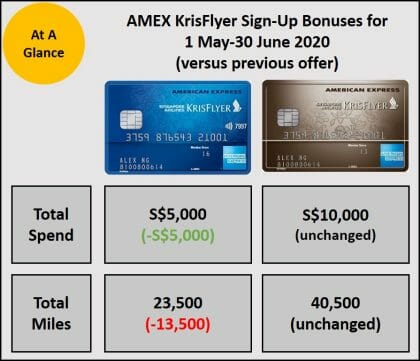 Read on for the full details.

Apply for the KrisFlyer Credit Card and get 5K bonus miles

Under the old sign-up offer, AMEX KrisFlyer Credit Card holders who spent S$10,000 in the first 6 months received a total of 37,000 miles.

Cardholders also used to receive 1,500 bonus miles for each of the first 2 approved supplementary cards. This has been discontinued.

Apply for the KrisFlyer Ascend Card and get a bonus 7.5K miles

There’s absolutely no change to the KrisFlyer Ascend’s sign-up offer. Cardholders who spend S$10,000 in the first 3 months of membership continue to receive a total of 40,500 miles.

However, just like the KrisFlyer Credit Card, AMEX has removed the 1,500 bonus miles for getting two supplementary cards.

Which transactions are eligible?

As per AMEX’s master list of exclusions, the following transactions will not count towards your sign-up bonus spending.

Do note in particular the exclusions for insurance, SPC and GrabPay transactions, which took effect from 1 March 2020. However, charity, hospital, education and utilities payments continue to earn miles, assuming AMEX cards are accepted. 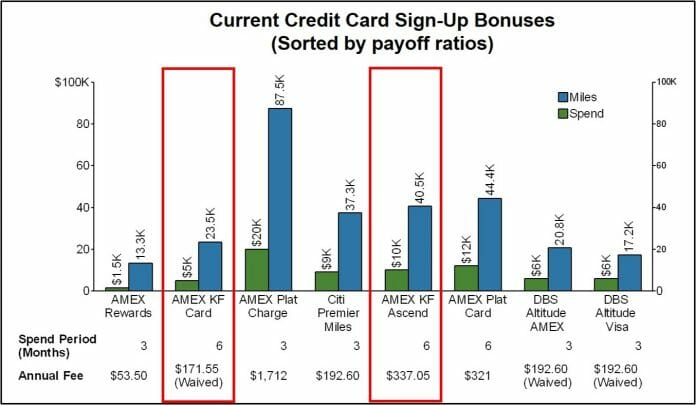 As I mentioned at the start of this post, the sign-up bonuses on AMEX cards are some of the best in Singapore. In the table above, I’ve plotted the spending and total miles payoffs for each card, and sorted it by payoff ratio (total miles divided by total spending).

The AMEX KrisFlyer Credit Card is AMEX’s entry level offering, and doesn’t have any frills to speak of apart from its first year fee waiver.

The AMEX KrisFlyer Ascend, on the other hand, comes with four complimentary lounge passes, Hilton Silver status (great if you’re planning to buy points as you get the 5th night free on redemptions), a complimentary night at selected Hilton properties, and a fast track to KrisFlyer Elite Gold. To enjoy these benefits, you’ll need to pay the S$337.05 annual fee.

The new sign-up bonus on the KrisFlyer Credit Card represents a devaluation from the previous one, insofar as you no longer have the option of earning a further 8,000 bonus miles from spending S$5,000 more.

However, the value proposition for the KrisFlyer Ascend remains unchanged.

For a full list of all the sign up bonuses currently on the market, refer to our guide here.

Aaron Wong
Aaron founded The Milelion to help people travel better for less and impress chiobu. He was 50% successful.
Previous articleWill Singapore Airlines ever finish refitting all its A380s? Don’t count on it
Next articleMay offer: Get up to S$100 GrabFood vouchers for OCBC credit card sign-ups

Unless someone can refer you to a much better deal, like this one

(Aaron… if you feel it’s inappropriate to share referral link on your site, please remove this post.)

it’s basically the same offer. the difference being the one you linked to hasn’t been updated to reflect the removal of month 4-6 bonus.

Not really. The link I got was from someone who got the card in recent months. Think the bonus applies even if Amex chooses to amend their signup bonus starting this month.

I used to hold the KrisFlyer Amex credit card. How much time should elapse before it is considered a new sign up?

I am already a AMEX KF card holder; can I get the MGM bonus if I apply to the AMEX Ascend card through your link ?
Thanks !

yup, your existing KFCC will also be cancelled.

but you will not be eligible for the welcome bonus right? I was looking at T&C page 5

Hi Aaron. Am currently holding KFB which anni is coming soon. If I cancel my KFB and get Ascend via your MGM link, would I qualify for the mgm bonus this way? Thanks