Will Singapore Airlines ever finish refitting all its A380s? Don’t count on it

Only 8 of 19 A380s have Singapore Airlines' new cabin products, and at the rate things are going, we're not likely to see many more.

Here’s something to chew on: when Singapore Airlines unveiled its new A380 cabin products, management predicted that all 14 older A380s would be refitted by the end of 2020.

That’s…not gone according to plan. As of today, Singapore Airlines has only refitted 3 of 14, which together with the five that were delivered with the new cabin products pre-installed, makes seven aircraft in total.

With 96% of the fleet grounded and just a bare bones route network now in operation, it’s been speculated that Singapore Airlines might use this time to accelerate the A380 refits.

While that’s certainly possible, I think it’s unlikely. In fact, I think it’s almost certain now that the refit project will never be completed.

Singapore Airlines has four versions of the A380:

It took Singapore Airlines eight months to refit 9V-SKS, the first of the old A380s. The second refit to 9V-SKT took 11 months, and the third to 9V-SKN took eight months. There will no doubt be some learning curve benefits that accelerate future refits, but the track record thus far doesn’t exactly inspire confidence.

Assuming 9V-SKT was an aberration and regular refits can be accelerated to a pace of six months, it could take six years to finish the remaining 12 aircraft.

The Version 1 aircraft would be due to fly to the great boneyard in the sky (or in the desert, more accurately) by then. Singapore Airlines prides itself on a young fleet (the average fleet age last year was 6 years 7 months), so it simply doesn’t make sense to refit an aircraft, only to fly it for a couple years more at most.

There may be some hope for all six of the remaining Version 2 aircraft to be refitted, but I don’t think that’s likely either, given how at least a couple of them would be pushing 12 years by the time the refits are done. Singapore Airlines kept the B777-200ERs for up to 16 years, but it’s hard to see the gas-guzzling A380s kept around that long.

The current A380 Business Class product is “good enough”

Another argument against refitting all the A380s comes from the fact that the existing seats in the high-yielding Business Class cabin are “good enough”.

Version 1 & 2 aircraft use the 2006 Business Class seat. It’s 34 inches wide (wider than some airlines’ First Class), goes fully flat and offers 100% direct aisle access in a 1-2-1 configuration. Factor in Singapore Airlines’ usual high quality service, and I’d argue that the overall product, while dated, can hold its own against the competition.

For comparison, here’s what other airlines are offering on some of Singapore Airlines’ A380 routes:

Obviously the quality gap differs depending on the route, but in no case is Singapore Airlines’ Business Class significantly behind the competition (remember they also operate the B77Ws on some of these routes, with the 2013 Business Class seat).

Don’t get me wrong- I still think the 2006 seat is tired and in need of an upgrade. But as David Flynn from Executive Traveler once quipped to me- once you’ve gone full flat, you can’t go any flatter. Once you grant all-aisle access, there’s no more aisle to give. Sure, you could add doors, you could add a bigger IFE screen, but at the end of the day it’s about hygiene factors- a flat bed, and direct access to the aisle will suffice for most business travelers.

Besides, there’s another aircraft that needs more immediate refitting…

The refitting of SilkAir’s fleet should take priority

Back in 2018, a decision was made to dissolve the SilkAir brand and merge it into Singapore Airlines. That meant Singapore Airlines would inherit SilkAir’s narrowbody fleet, and refit them with full-flat Business Class seats.

Unfortunately, the MAX 8’s grounding has complicated things. Singapore Airlines has now undertaken to refit “a number” of Boeing 737-800s from SilkAir, with work supposed to start between January to June 2020 (no doubt the coronavirus will throw yet another spanner into the works).

Now, there’s nothing stopping Singapore Airlines from refitting both the B737s and A380s at the same time, but assuming resources are tight (and they are), where would you choose to allocate your budget?

After all, the gulf between a recliner seat and a full flat one is much greater than a full flat seat and a better full flat seat. The MAX 8, when re-certified, will stick around a lot longer then the A380. If we expect regional travel to recover before long haul, then it’s all the more important for the narrowbody fleet to be brought up to standard ASAP.

What does this mean for the A380s?

If Singapore Airlines chooses not to upgrade all of its A380s, the 2017 Suites and Business Class might earn the dubious legacy of being the rarest SQ seats of all time- researched and developed at a great cost, but only deployed on a handful of aircraft. 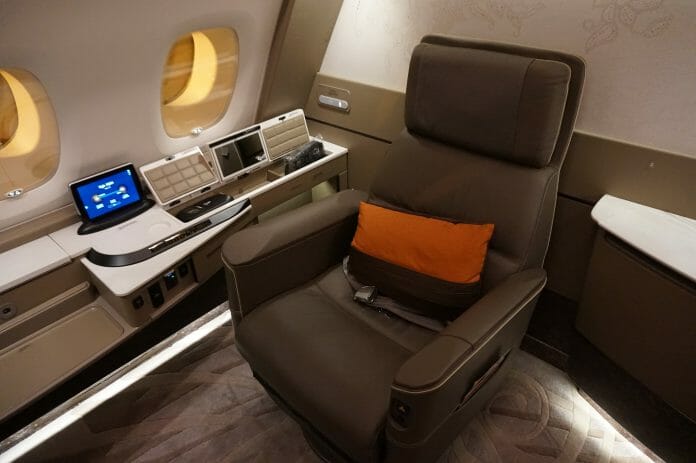 And that, in my opinion, is a downright shame. I didn’t think the new Suites was perfect, far from it. In fact, I thought there were several design flaws that were pretty glaring for an airline normally so obsessed with the small details.

Yet, I thoroughly enjoyed the novelty of having my own room in the sky, an absolutely massive bathroom (complete with dressing table), and spinning the armchair everywhich way while saying “Full ahead, warp factor five”.

Given how unlikely we are to see another aircraft the size of the A380 again, this could be the last opportunity to see what Singapore Airlines could do, if given a canvas where space isn’t a constraint.

The new Business Class is likewise a great experience. Yes, it’s not the best in the world (that accolade goes to ANA’s phenomenal THE Room), but it was aesthetically pleasing, comfortable, and private. It also marked a switch in the Singapore Airlines design philosophy, not requiring you to stand up and convert it into a bed. I’d be disappointed if only gets installed on barely a dozen aircraft.

Singapore Airlines flew four of its new A380s to Alice Springs last week for storage. This suggests the priority is to preserve these airframes, as there’s little point exposing them to harsh tropical weather while they perform few to no flights.

Hopefully this means Singapore Airlines intends to keep them for some time to come, although on the flip side, it also means the new cabin products will be extremely rare at the moment (not that anyone will notice).

I really hoped there’d come a day when all 19 A380s had the new cabin products, improving the chances of snagging award seats on the new Business or Suites. Sadly, it looks like that’s wishful thinking. The age of the Version 1 aircraft, relative competitiveness of the existing seat, and need to divert whatever limited cash there is to the B737 refit all point towards a mixed-product A380 fleet.

If you haven’t already tried Singapore Airlines’ new A380 cabin products, I strongly suggest you do as soon as travel resumes. They may never become as commonplace as originally envisioned.

I’d love to be proven wrong though.

Whilst with all respect and I agree with many thing you have written, the A80 refresh in some quarters did not get fantastic reviews and what it in my opinion comes down to is that SQ stated it would be done and it hasn’t.

You could argue its good enough but to the travelling paying public, its not.

thanks for sharing! yeah, i know some people aren’t thrilled about still having to sleep diagonally in J, and the Suites experience has a few design issues…what did you feel fell short in the new a380?

to clarify- “good enough” refers to the 2006 J seat. it’s old and dated, but it says a lot about SQ that it’s still much better than LH J or BA J.

Hey, Aaron. Absolutely agree about some aspects of SQ and in particular the crew. On my last SQ A380 flight Sin/FRA in F class in December the central divider wouldn’t stay down and the laminate was separating from the base on many seats. The crew (fantastic) had reported the issues to SQ Management many times before and were saying that many business class seats had been blocked as they were faulty and waiting repair. I just think that SQ like EK promised refits and the only airline that has actually delivered is Qatar with its Q Suite. I just find… Read more »

agree completely. kind of like how the new EK F is exceedingly rare, or how united rebranded the entire business class product as polaris when there were only a handful of “true polaris” seats. i haven’t actually been paying much attention to SQ’s marketing recently, so I don’t know to what extent they’ve played up the new a380 cabin products. from what few ads I saw, the emphasis seemed to focus more on things like the 2018 RJ. I do know for a time they were experimenting with a label on their website which indicated when an a380 had the… Read more »

Hey, Aaron. You are a gentleman and a scholar! Thank you, stay safe and travel well – Taylor

With social distancing being in placed for the foreseeable future wouldn’t the a380 make most viable sense than over a320 or a350. Point to point will not be cost effective now and hub model can work which is the purpose of the a380. Think airlines need to redo the maths on this. So my take is re invest in a380 upgrades. Never liked the 2017 products though. In F the seat just doesn’t make sense or comfort and eat facing your neighbor was the silliest mistake. Use of space is not optimized its big and spacious but not really practical.… Read more »

point to point yes they’d die because they could not fill the seats. the a380 was design for hub model and should only serve that purpose. filling up a380 seats has always been a problem for most airlines except emirates. but now if you must social distance then the space available for use on a320 or a350 vs a380 would might make sense per trip. we got to stop thinking of current or past flying patterns and model, it gotta to be re-written with new rules and models and thinking. airports and planes were never designed with social distancing in… Read more »

I don’t see how SQ can justify refitting of B737 too. The top priority is to keep the balance sheet healthy.

No problem 🙂 yes, air france has those seats on the sin-cdg route, if I’m not mistaken

My 2 cents worth: I’ve flown both the 2006 J (SIN-FRA- JFK) and the 2017 J (SIN-PVG) on multiple occasions, and while the 2017 J is definitely newer and nicer, the improvements are marginal, tbh. The 2006 J was more than adequate for the flight to the US, and you can’t argue with the amount of space you have. If there’s three things the 2017 J has over the 2006 J, it would be the back support when the seat is fully reclined, the resolution of the entertainment screen and the size of the overhead bins (the overhead bins on… Read more »