Tucked away in the T&Cs of UOB credit cards is an innocuous four-digit code with not-so-innocuous implications.

As any miles chaser knows, studying credit card T&Cs is one of the less glamorous parts of the hobby. After all, there’s nothing more riveting than pawing through page after page of legalese, obfuscation, and disclaimers.

It all started when I spotted an update to the T&Cs of the KrisFlyer UOB Credit Card. These changes, which take effect from 1 July 2020, exclude additional categories of transactions from earning bonus points:

Computer software, art supplies, and florists were all pretty intuitive to me, but what on earth were direct marketing merchants?

A quick glance at an MCC guide told me that the ranges in question covered the following:

That wasn’t any clearer, so I decided to look for community-reported examples on WhatCard.

I was certain that someone was trolling me. But then I did a bit of research, and learned that MCC 5967 was indeed the standard-issue code for smut.

Let’s back up a bit.

MCCs are important because they determine how much a merchant pays to accept card payments, otherwise known as the interchange rate.

Certain MCCs qualify for a business for a lower interchange rate. For example, charities, educational institutions, and government agencies typically enjoy discounted interchange fees. That’s good for them, but less profitable for the bank, and why most credit cards typically exclude rewards for such transactions. 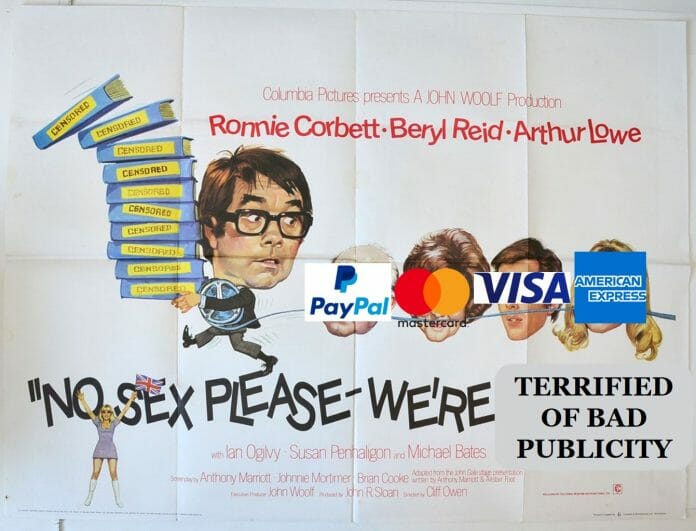 “Well that’s preposterous, I only use the internet for sending flowers to my grandma and occasionally arguing”

Then there’s the reputational issues. Who wants to spend millions of dollars on branding, only to see your logo plastered alongside acts of wanton carnality? Add to that pressure from campaign groups and federal investigations, and it’s easy to see why some companies decide it’s just not worth the aggravation.

So a compromise was reached. Hiving off a separate MCC would allow the industry to be ringfenced, and 5967 was duly chosen. Its description? The aggressively bland (or titillatingly euphemistic, depending on your point of view) “Direct Marketing- Inbound Teleservices Merchant”. If you squint hard enough, you can kind of see why that’s apt.

This is now the prescribed MCC for all adult content, whether with Visa…

Visa, for example, does not extend fraud liability protection to merchants processing under MCC 5967, even if they use its “Verified by Visa” 2FA system. It also levies a higher penalty on MCC 5967 merchants for exceeding chargeback thresholds than for similarly non-compliant merchants processing under a different MCC. It’s kind of like the cool kids telling that creepy (but rich) kid he can join their clubhouse, “but sit in that corner and don’t touch anything”.

Which brings us back to UOB. Even though the KrisFlyer UOB credit card will no longer award bonus points on MCC 5967 from 1 July 2020, there’s another UOB card which does.

The UOB Preferred Platinum Visa earns 10X UNI$, or 4 mpd, on selected online transactions. On page 2 of its T&Cs, you’ll find a listing of eligible MCCs, and lying innocuously in that approved range is none other than our good friend 5967.

That said, it just tickles me that at some point the UOB legal team were going through this document and saying “MCC 5964-5970? Yeah, no issues here.” How long this clause remains, I have no idea, but I’ll never look at a UOB card the same way again.

Pornographic transactions are a tricky area for banks and card networks to deal with, but the problem is likely to solve itself, given how bitcoin and other decentralized cryptocurrencies are better candidates for payment anyway.

So that’s the story behind MCC 5967, the most salacious four-digit combination you’ll ever find in the T&Cs.

What a missed opportunity to have the numbers “9” and “6” in the MCC, and have them in that order…

Jokes aside, it’s a testament to how much the card networks have whitewashed the MCC 5967 name that UOB can just think “Oh, ‘Direct Marketing- Inbound Telemarketing Merchant’? That sounds like an online shopping MCC, let’s put it as a bonus category.”

One would have thought their interest would lie in less, rather than more, clothing

Why can’t the make it a law for all online transactions to declare the MCC during payment. Is really part of transparency.

Which card do I use for KTV?

KTV should by 5813 so you can use UOB Lady’s (4mpd if you select Entertainment as bonus category), KF (3mpd), HSBC Revolution (2mpd). Or you can PayWave and get 4mpd on PPV.

I can neither confirm nor deny what you just said.

Yes, KTV for Men…Where I sing and eat peanuts…which card to use pls sir?

It would be hilarious if I need to take my wife’s UOB Lady’s card to KTV, in order to maximise….our airmiles. Cause I love traveling with her…

Man on the phucking moon