The transit passenger ban will be lifted from June 2, offering some respite to Singapore Airlines, Scoot, and of course Changi Airport itself.

Since March 24, Changi Airport has banned transit passengers as part of efforts to combat the spread of Covid-19. Consequently, passenger movements have dropped off a cliff, with April 2020 seeing Changi handling 0.4% of the passengers compared to a year ago.

Traffic has more or less bottomed out, and May has seen Changi handling an average of 100 arriving and 700 departing passengers a day.

Changi will reopen to transit passengers from June 2

The Civil Aviation Authority of Singapore (CAAS) has announced that travellers will be allowed to transit through Changi Airport once more with effect from 2 June 2020.

Singapore will gradually allow travelers to transit through Changi Airport with effect from 2 June 2020. This is part of Singapore’s strategy to gradually re-open air transport to meet the needs of our economy and our people, whilst ensuring sufficient safeguards for safe travel.

Airlines will need to submit their proposal for transfer lanes through Changi to the CAAS, which will evaluate them based on aviation safety and public health considerations, as well as the health of passengers and air crew.

Changi will take stringent measures to ensure that transit passengers remain in designated facilities in the transit area and do not mix with other passengers while at Changi Airport. Airport staff will wear PPE when interacting with passengers, while safe distancing and temperature taking will continue to be enforced.

How will transit passengers be kept sterile?

The CAAS plans to keep transit passengers in a sterile area (pun intended), away from other passengers.

I’d be interested to see how they do that, because Changi Airport is not really set up that way. Changi’s regular layout is one where departing, arriving, and transiting passengers mingle together before and after flights. This is a feature, not a bug- it makes for much easier connections. Those who have transited on tight connections through airports where departing and arriving passengers are kept separate will appreciate that.

We’re going to have to see some pretty clever utilization of departure and arrival gates then, with arriving passengers hermetically sealed from the transiting ones, and contact between transit passengers and airport staff kept to an absolute minimum.

This will probably mean that transit passengers will be shuttled from gate to gate, without the chance to visit airport amenities like lounges or duty-free. Changi Jewel? Forget about it. This won’t be business-as-usual (nor should it), and anyone who’s flying during this time needs to accept it’s par the course for the travel experience now.

What does this mean for Singapore Airlines and Scoot?

The lifting of the transit passenger ban will no doubt be a win for Singapore Airlines and Scoot, which rely heavily on transit traffic. It won’t reverse their fortunes overnight (most of the world still has extensive travel restrictions, after all), but it’s a step in the right direction.

From what I can see, neither Singapore Airlines nor Scoot have started selling transit flights for the month of June yet. The earliest transit options are available from July, when both airlines are, theoretically at least, operating regular schedules again.

Obviously this is subject to change, but Singapore Airlines has already announced a bare bones schedule for June, which limits transit possibilities. July is probably a more realistic timeline for getting these back up and running.

Scoot, on the other hand, yesterday announced an expanded flight schedule for June. One particularly noteworthy thing was that Penang, Ipoh, and Kuching had been added back to the route network. That makes a lot more sense if the transit traffic is once again possible, as I can’t imagine there’d be much point-to-point demand right now. These are predominantly leisure destinations, and leisure travel is still off the cards for Singaporeans. 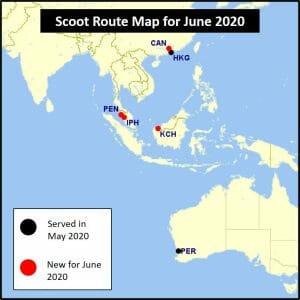 We should have greater clarity on how the transit arrangements will work in the weeks to come.

Changi reopening to transit traffic is a small but important step in the return to normalcy, or at least whatever the new normal is going to be. Don’t expect passenger traffic to spike, but at least they’ll recover slightly.

Any win now is sorely needed.

Hi Aaron, I can tell you this news could make a huge difference for all Europeans who are marooned in SE Asia since end March. Otherwise they are only left with that elusive hope that Turkish Airlines will resume flying somewhere in July or pawning all their jewels to pay for Qatar Airways tickets.

Great to hear- I didn’t know the repatriation situation was so bad elsewhere. Hope everyone gets home safely

Great news for all the international students in Europe. This certainly will provide them with more options and flexibility to get back home for Summer. Before the restriction was in place many of them use Singapore as a transit to get to the greater China region as direct flights are often limited and extremely costly. During the last week of March, a one-way ticket departing from Heathrow to the Far East in economy class often cost up to 5k pounds when everyone was rushing to get out of UK.