Since then, it’s been steadily adding to the list of cities that transit passengers can originate from. Initially, there was just Australia and New Zealand. That then grew to China, Hong Kong, Japan, South Korea and Taiwan. At the end of June, selected European cities were included, and now, all of SIA’s European destinations are eligible.

This brings the total list of cities from which passengers can book transits through Changi to 22.

Do note the “from” qualification- transit flights are only valid for outbound journeys from these selected cities. Passengers will not be able to transit from any other points in the SIA Group network through Singapore into these cities.

From Singapore, these transit passengers will be able to connect to the following destinations: 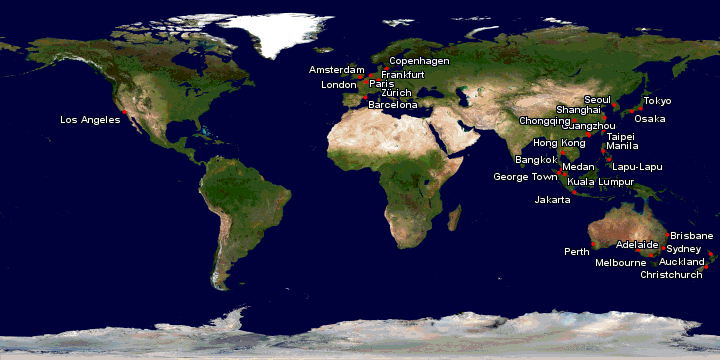 For further details, refer to the following articles about the destinations that Singapore Airlines and Scoot are serving:

Although the addition of these cities opens up more routing options, do note that return flights can only be booked if both the origin and final destination are in the list of approved cities for transit via Singapore.

For example, Tokyo – Singapore – Sydney would be a valid itinerary, as both Tokyo and Sydney are in the approved city list. However, Sydney – Singapore – Los Angeles would not be a valid routing (as the return leg would violate the regulations).

To meet the regulatory requirements, customers will need to book their full journey on one ticket, instead of splitting it up into separate tickets. In any case, I can’t imagine why anyone would want to split up their tickets- transit flights through Singapore on Singapore Airlines would almost certainly be cheaper than two separate point-to-point tickets terminating and starting in Singapore.

What can you expect during the transit experience?

Changi Airport has produced a video showcasing what passengers can expect during their transit.

Transit passengers will be kept as sterile as possible, with minimal interaction with passengers for whom Singapore is their final destination.

The process starts before passengers have even stepped foot in Changi. Passengers will be screened for any signs of illness and asked to make a health declaration.

Those transiting in Singapore will be the first group to board the aircraft (regardless of cabin class). They will be assigned seating in a designated zone, which they must stay in throughout the flight.

During transit in Changi

On arrival at Changi, transit customers will disembark last, after passengers for whom Singapore is the final destination. All arriving passengers will be temperature screened, and transit passengers will receive a wristband which grants them access to the designated transit holding area.

Customers will not be able to make any stops along the way, and will have to stay in the transit holding area at all times. This area will have food kiosks, vending machines, restrooms, a smoking room and a snooze corner, with complimentary Wi-Fi. Passengers with young children will be relieved to know there’s an entertainment one with game machines at the Terminal 3 holding area.

Changi will allow transit passengers to make duty-free purchases using the airport’s shopping concierge service. Products offered include those sold by Shilla Cosmetics and Perfumes, Lotte, and Gift by Changi Airport. These will be delivered directly to the holding area. There will also be an option to order food from outlets in Changi Airport.

PPS Club members, Suites, First, and Business Class passengers will not be able to access the SilverKris Lounge in Changi Airport due to regulatory requirements. They will instead be invited to a “premium waiting area” in the transit holding area, where complimentary food and beverages will be provided.

There’s no mention of any access for KrisFlyer Elite Gold or Star Gold members traveling in Economy Class, so I think it’s best to not expect any love.

For passengers with a longer layover, the Aerotel hotel in Changi Terminal 1 is now open for bookings, with a minimum stay of 1 hour. Transit passengers who have made bookings should inform the Changi Experience Ambassador on duty for assistance, who will escort them to the hotel.

When the time comes to board, transit passengers will be ushered in groups from the transit holding area directly to the boarding gate, and board the aircraft first.

Singapore Airlines started June with only seven cities approved for transit passengers, but that’s quickly grown to the current 22.

The addition of the last few remaining European cities will offer more options for passengers trying to get home during this time, and means more economic activity for both Changi and Singapore Airlines. Changi has not released its traffic figures for June yet, but the recommencement of transit flights will hopefully result in a big improvement from May’s dire straits.