With Chope-Dollar redemptions still suspended, there isn't much you can do with them now...except maybe gamble.

Back in April, Chope announced that it would suspend all Chope-Dollar redemptions until 3 November 2020. Users can still earn Chope-Dollars on fulfilled reservations; they just can’t spend them.

We’re fast approaching November, and while there’s no update yet on the resumption of redemptions proper, Chope is now allowing members to exchange Chope-Dollars…for lottery tickets.

For perspective, 25 Chope-Dollars is worth about 70 cents in dining vouchers. Even that needs to come with a caveat though, as Chope gutted its rewards program in November 2019, adding a minimum spending requirement to all ChopePerks redemptions.

Do note that these are not sure-win tickets; in fact, you could burn the Chope-Dollars and have nothing to show for it. 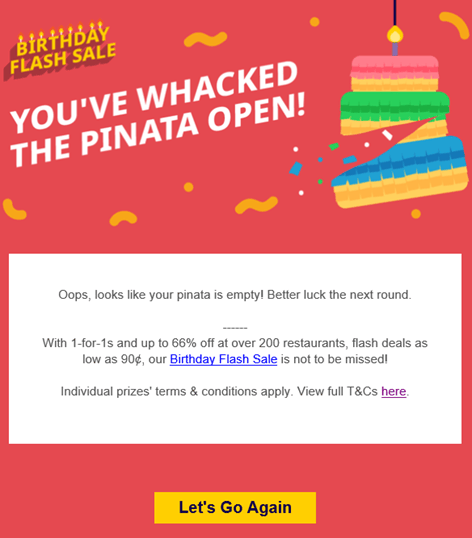 That said, I’ve historically had really bad luck with Chope’s games of chance…

I spun the Chope birthday wheel 2,739 times. Here’s what happened.

The T&C for this campaign are really, really hard to find, so I can’t say for certain what the prize pool contains, or what the odds of each prize are. Based on this Chope page (scroll to the bottom and expand the T&C), it appears that there are at least two types of vouchers:

Discount codes are only valid from 21-24 September 2020, and cannot be combined with any other codes or offers.

Needless to say, these are extremely weak prizes, and probably not worth blowing 25 Chope-Dollars. Then again, I suppose you’re playing with the hope of winning the staycation…

What else can you spend Chope-Dollars on? 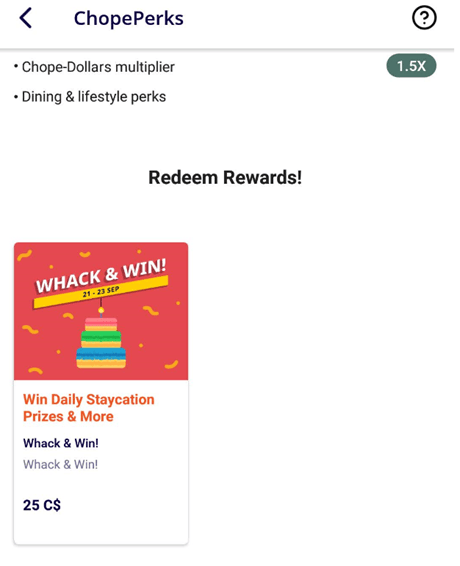 At the moment? Nothing else. While Chope initially said that donations to charity would continue to be available for Chope-Dollar redemptions, they’ve quietly removed that too. As of today, the Whack & Win contest is the only item in the ChopePerks catalogue.

November is drawing ever nearer, so let’s see whether ChopeDeals redemptions return, and whether Chope will try and pull another fast one with their rebate program.

If you fancy your luck, you can burn 25 Chope-Dollars for a shot at a staycation. Realistically speaking, however, you’ll probably be throwing them away.

From Chope’s point of view, Whack & Win is a good promotion to run. Most of the booby prizes won’t be redeemed (S$2 off S$30 is almost derisory), and many more tickets will be no-wins anyway.

You may find it silly, but people really do spend their points on stuff like this. Some time back I spoke with the head of a major regional loyalty program, and he remarked how popular sweepstakes redemptions were in South East Asia. By running a few of these each quarter, they could remove a significant number of points from their balance sheet at minimal cost. I imagine Chope has the same idea here.

Are you playing Whack & Win? Sound out with what prizes you won!

Aaron Wong
Aaron founded The Milelion to help people travel better for less and impress chiobu. He was 50% successful.
Previous articleWhy I’ve booked a trip to Australia in August 2021
Next articleGet up to S$250 cashback when approved for a DBS/POSB Credit Card

Actually I am just hoping that chope won’t fold before this episode ends….. Have a strong suspicion but hope I am wrong.

With the last funding round of Chope almost 3 years ago, I doubt any worthwhile redemption options will come back anytime soon.