Singapore Airlines is resuming non-stop flights to New York...but to JFK instead of EWR.

Back in October 2018, Singapore Airlines resumed operating the world’s longest flight between Singapore and Newark. I managed to fly the inaugural, and it was one of the most fun flights I’ve done to date.

But today comes word that Singapore Airlines will restart non-stop service to New York’s John F. Kennedy International Airport (JFK) from 9 November 2020, a surprising development given all that’s going on.

From the press release:

Operating to JFK International Airport would allow Singapore Airlines to better accommodate a mix of passenger and cargo traffic on its services to New York in the current operating climate. SIA’s non-stop services to New York would also be supported by the growing number of transfer passengers who can now transit via Singapore’s Changi Airport.

SIA also anticipates significant cargo demand from a range of industries based in the New York metro area, including pharmaceuticals, e-commerce and technology firms. The new service will provide the only non-stop air cargo link from the U.S. Northeast to Singapore, which serves as a regional distribution hub for many major U.S.-based companies.

From 9 November 2020, SQ24 will operate three-times weekly service between Singapore and New York. SQ23, the return service, will start on 11 November 2020.

For the sake of comparison, SIN-EWR is blocked at 18 hours 25 minutes on the outbound leg and 18 hours 45 minutes on the return, so the JFK flight is ever-so-slightly shorter. Interestingly enough, GCMap shows the JFK route to be slightly longer than the EWR one, but of course this doesn’t reflect the actual flight paths flown. 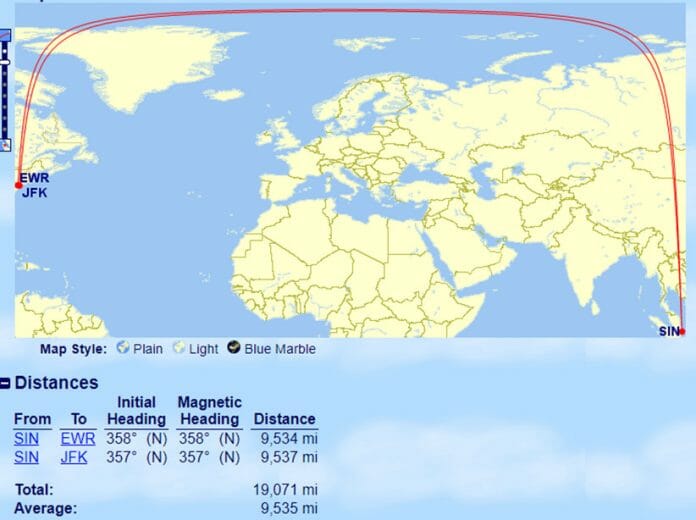 Using the regular A350-900s means flight payload restrictions due to fuel concerns, and perhaps that’s a mixed blessing. Economy Class on such a long flight is going to be brutal, but passengers should be able to stretch out on a few empty seats if not all of them can be sold.

SIA veterans will know the airline also serves JFK via Frankfurt (or at least used to before COVID-19), and from what I can see, that’s still the plan.

SQ25/26 are still scheduled from 11 January 2021 onwards, although it’d take a brave man to bet on that going ahead. Remember, the USA is currently imposing an entry ban on foreign nationals from the Schengen area, which makes a FRA-JFK flight practically impossible. The experts say that COVID-19 may worsen in winter, so I wouldn’t hold my breath.

But what will happen to the EWR route? Is there really sufficient demand for Singapore Airlines to operate both? Probably not, and it’ll be an interesting decision once travel volumes recover. For what it’s worth, I do find it more convenient to get to New York City from EWR, thanks to the Airtrain. JFK, on the other hand, is connected via the subway which isn’t nearly as good (a lot more stops, for one).

While Singapore Airlines and United are both part of the Star Alliance, those in the know would tell you their relationship has never been all that friendly (I don’t think it’s a coincidence that when United launched non-stop SIN-SFO service, they dubbed the flights UA1/2, copying SQ1/2).

As it is, Singapore Airlines has a preference for codesharing with JetBlue rather than United, and United’s decision to abandon JFK in 2015 simply made that easier. But United has always regretted that choice, and now plans to return to JFK in 2021.

Could that mean more connections between the two in JFK? It certainly could, although one wonders whether they’re on better terms these days.

Restarting non-stop service to New York should allow Singapore Airlines to capture a larger share of transit passengers through Changi, although I’d think that cargo would be a more significant play at the moment.

It’s a shame- in normal times, I’d have loved to be on the inaugural, but that’s obviously not going to happen. Should essential travel happen to take you there, however, do let us know what the experience is like!

What do you make of Singapore Airlines’ new non-stop flight to New York?

Aaron Wong
Aaron founded The Milelion to help people travel better for less and impress chiobu. He was 50% successful.
Previous article
Shopping or banking online? Here’s how to stay safe
Next article
World of Hyatt selling points with a 30% bonus

You can always make the essential trip there as a “journalist”

i’m just waiting to hear when they’re starting SIN-SFO … have booked for january; hoping it’s not a phantom

Somebody
Reply to  Christ

Fingers crossed! EWR/JFK is Scylla/Charybdis! Even when I had east coast commitments back in the good old days, preferred flying eastwards and then take a domestic flight to LGA.
I am hoping SFO / SEA will resume but looks unlikely since people that you fly there to meet are WFH anyway with offices closed till next year. I guess nothing to do except fondly look at last year’s SQ31 boarding passes through December.

The LIRR is faster to get to manhattan from JFK than it is for Newark Airtran plus Path combo.

Yeah, agreed. I know people who would save by taking the subway, but honestly the LIRR is so much faster. Gets you into Penn Station in 10 minutes.

Makes sense. I really want to go to one of the most covid infected places in the world!

Ya, SIA, please bring in more covid from the most cases country back to Singapore.