From now till 30 March 2021, book excellent rates at the Conrad and Hilton Singapore, for stays up till the end of 2021.

Hilton has brought back its “Big Dreams, Big Savings” sale, which offers up to 30% off hotels across Australasia, South East Asia, Japan and Korea.

The good news is that rates are even cheaper than they were the last time round in December (which already offered some very good prices). There’s even some reasonable rates for the March school holidays, if you’ve left it late to make bookings.

This sale is valid for all stays booked from 11-30 March 2021, with stays from 14 March to 31 December 2021. Three days advance reservations are required, and full payment is required at the time of booking.

Reservations are non-refundable, but dates can be changed at least three days prior to arrival.

The Conrad Centennial reopened for staycations back in December, and I was very pleased with my recent stay, so much so I’m considering going back again.

The lowest rates I can see start from S$196++ (S$231 nett). FYI, during the previous sale in December the lowest rate was S$239 nett. Amazingly, there are still some reasonable rates to be had during the March school holidays- S$217++ (S$255 nett), if you’re OK to stay midweek. 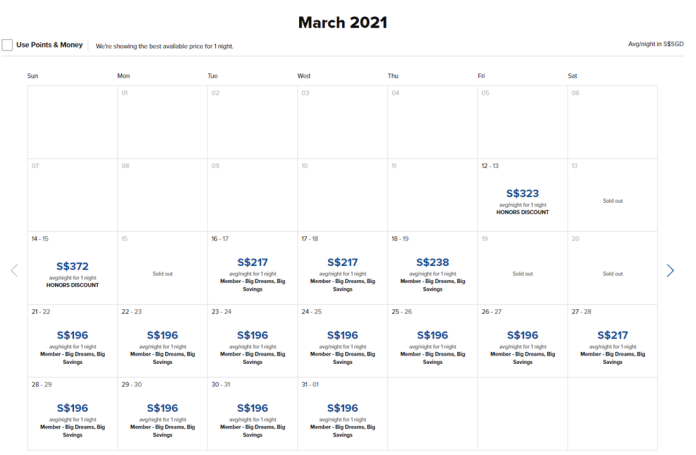 The S$196++ rates stick around till May, after which they go up a fair bit. In August and December, for example, the lowest price is S$252++.

Do note the rates I’m quoting above are without breakfast. Breakfast entails an additional S$21++ (S$25 nett) per night. You won’t need this if you’re a Hilton Gold or Diamond, but otherwise, I’d highly recommend going for it. Buying breakfast at the front desk will cost you S$30++ additional per person. 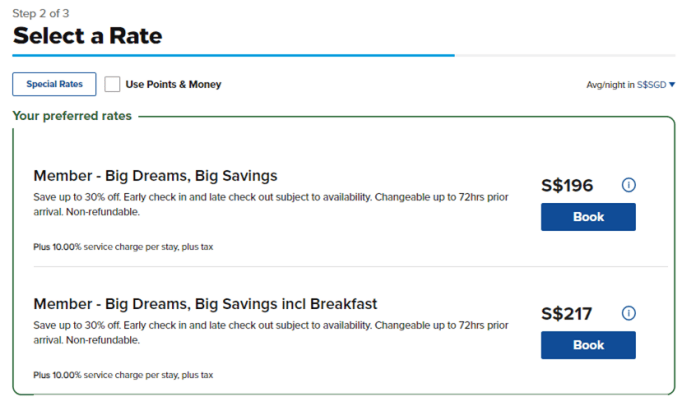 If it helps, the Conrad Centennial serves up an excellent breakfast, one of the better ones I’ve had on staycation so far.

I was none too impressed with my stay at the Hilton Singapore last year, but hey, it’s cheap. Really cheap, in fact, with stays starting from S$129++ (S$152 nett). During the previous sale, rooms started significantly higher at S$201 nett. 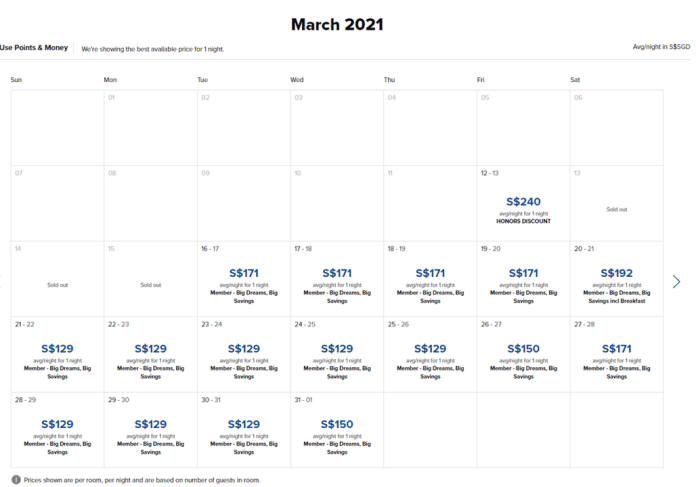 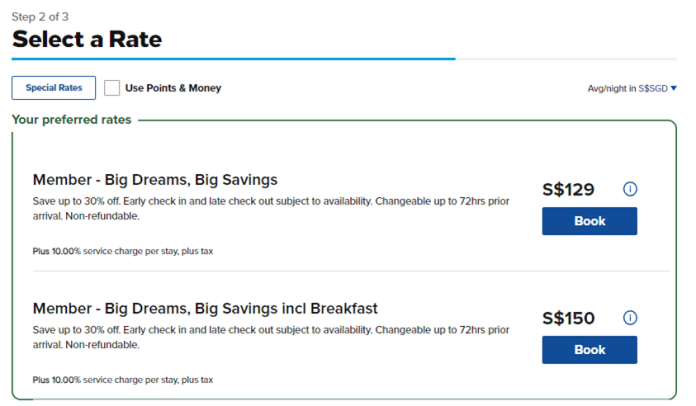 What card should I use for Hilton bookings?

Bookings at the Conrad or Hilton Singapore will code as online local currency hotel transactions (or not- see comments section below). You can use the following credit cards to maximize your miles.

During the previous Big Dreams sale, a Milelion reader who booked properties in Thailand reported that they only charged his card on arrival, hence he didn’t earn any bonus points with the Woman’s World Card (if that’s the case, the Altitude wouldn’t work either). If you’re paranoid about that happening, the HSBC Revolution and UOB Lady’s Cards would be the safest options.

This Big Dreams sale is shaping up to be even better than the previous, and depending on your risk appetite (and whether you think what Ong Ye Kung says will come to pass), it might even be worth looking at some overseas destinations for the 2nd half of the year.

Remember that bookings cannot be cancelled, but you can change your dates up to 72 hours before arrival (you’ll need to pay the difference in rates, of course).

Both Singapore’s Hilton and Conrad charged my card for payment at check-in so I doubt the DBS Altitude and Women cards can accrue bonus points.

thanks for the DP. have added a note

you wont be able to search via the app. search via desktop, using the link in this article

Somehow the link doesn’t show the promo for me even after I’m signed in as member. All I get is the usual “Honours Discount”

i believe i’ve fixed it! try again in the article links or via here

Hi Aaron is there another link or webpage that we can link from? I tried your link on my laptop but the prices still aren’t the same. My rates page looks different from yours too (it doesn’t make any reference to Big Dreams, Big Savings).

yeah that’s weird, the breakfast option has disappeared. i don’t know what to tell you, maybe it’ll appear again later. only option is to keep checking back.