Planning to rack up status credits with your KrisFlyer UOB Credit Card? Beware- it's not as straightforward as it seems.

For the next 11 months, Singapore Airlines is running a campaign that allows KrisFlyer and PPS Club members to earn status credits without flying. Elite miles and PPS Value can be earned by spending on Kris+ and KrisShop, converting KrisFlyer miles from banks and other non-air partners, and spending on co-brand cards.

It’s that last one I want to focus on in this post. I’ve already written about whether it’s worth converting 250,000 miles from credit card points to earn KrisFlyer Elite Gold status, but what happens if you own a co-brand card?

And what if that co-brand card happens to be the KrisFlyer UOB Credit Card?

The Curious Case of the KrisFlyer UOB Credit Card 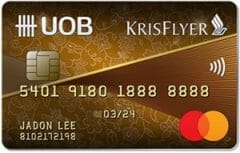 While that’s a very wide range of bonus categories, there’s a major caveat attached. The 3 mpd is broken into:

UOB calls the bonus component, with no small sense of irony, “Accelerated Miles”. As per the T&C:

Accelerated Miles may be awarded two months after the annual fee posts, but keep in mind you’ll need to wait a further month before they’re credited to your KrisFlyer account (as co-brand cards batch and credit miles to KrisFlyer once per month).

As part of the “earn on the ground” campaign, Elite miles or PPS Value are credited within seven working days of miles posting to KrisFlyer. You can see how this works with cobrand cards in the screenshot below:

It’s quite straightforward for a card like the AMEX KrisFlyer Ascend, but the delayed crediting mechanism of the KrisFlyer UOB Credit Card has the potential to create some head-scratching dynamics…

The good news: You might get an unexpected bonus

If you spent a sizeable amount on everyday spend categories with your KrisFlyer UOB Credit Card last year, you may receive an unexpected shot in the arm towards elite qualification/ requalification when your Accelerated Miles post.

For example, suppose my membership year runs from April 2020 to March 2021. During this period, I met the S$500 minimum spend on SIA Group transactions, and clocked a further S$10,000 on everyday spend categories.

To give you an idea of when you can expect your Accelerated Miles to credit, refer to the table below:

The bad news: Some of your spending won’t count towards this campaign

But of course, this arrangement cuts both ways. Because of the delay in crediting Accelerated Miles (even typing that sentence gives me a headache), some of your spending during the campaign period won’t earn you Elite miles or PPS Value.

Let’s go back to the previous example. If my new membership year begins on April 2021, then my next batch of Accelerated Miles will only be credited to KrisFlyer in June 2022. The campaign will be over by then, and therefore, out of all the everyday spend I make from 1 April 2021 to 28 February 2022 (the campaign’s end date), I’ll only earn Elite miles/ PPS Value based on 1.2 mpd of it (instead of 3 mpd).

My head hurts just thinking about this, so let me try and simplify it. If your membership year ends from 30 April to 30 November 2021, you’ll be able to chalk up a good number of status credits by focusing on everyday spend during the periods below:

However, if your membership year ends from 31 January to 31 March 2021, or 31 December 2021, then tweaking your spending towards everyday spend won’t help, because the Accelerated Miles will arrive too late for the “earn on the ground” campaign.

The really bad news: Cardholders with membership years running from January to December

Since this promotion lasts 11 months, there will be one unfortunate group of cardholders who won’t see a benefit. I’m referring to those whose membership year runs from January to December.

Think about it. For the membership year spanning January 2020 to December 2020, Accelerated Miles would have been credited in March 2021– just before the “earn on the ground” campaign began.

For the membership year spanning January 2021 to December 2021, Accelerated Miles would be credited in March 2022– just after the “earn on the ground” campaign ends! That’s a strange (and probably unintentional) consequence of this campaign’s timelines, coupled with the KrisFlyer UOB Credit Card’s mechanisms.

How fixed are these timelines?

As if that wasn’t enough uncertainity, here’s something else to chew over.

Based on past experience, UOB may not be strictly adhering to the “two months after membership year” timeline. Last year, I wrote about how some cardholders were getting their Accelerated Miles awarded 2-3 months early.

The problem is: there’s no way of knowing if this was a glitch that benefitted just a handful of individuals, or whether it was something more systemic (if you have more data points, do chime in). Also, there’s no way of knowing whether the same thing will happen this year- UOB’s T&Cs have not changed, so good luck calling in and asking them to expedite your Accelerated Miles.

I feel confused just writing this article, but the tl;dr is that if you’re planning to earn status credits with spending on your KrisFlyer UOB Credit Card, be careful about how you factor in the Accelerated Miles.

Depending on your membership year and how good UOB is with sticking to its official timelines), your KrisFlyer miles may or may not earn you status credits. And if your membership year just happens to fall from January to December, there’s no upside from everyday spending for you at all.

Do you have a neater way of explaining this? I’m all ears.

I think UOB should simply liaise with SQ as a reliable partner for this card venture, and ensure the Elite Miles which are legitimately earned during the said period are credited. It’s not very difficult to speak to each other, and can be easily worked out at their ends. That’s assuming that both UOB and SQ are interested in giving the best for their customers.

Hi Aaron, I have a question regarding the current Unlock Status Credits Campaign, relating to the UOB Krisflyer (co-brand card). From what I know, spending on KrisShop gives one 3 Elite miles per 1SGD, and assuming UOB KF is used to make payment, it seems that an additional 1 Elite mile per 5 KF miles earned is possible. So take this example. Person A spends $500 (before GST) at KrisShop. He will be able to earn 1500 Elite Miles (from KrisShop spending) 1605 KF miles from 3mpd spend on UOB KF, and that provides an additional 321 Elite miles Total:… Read more »