From now till 15 June 2021 (or while stocks last), Grab is running a 35% pointsback promo for selected items in the GrabRewards catalogue, including Amazon and Qoo10 gift cards, STAR$ and F&B vouchers.

This sale can be accessed through the rewards section of the Grab app. 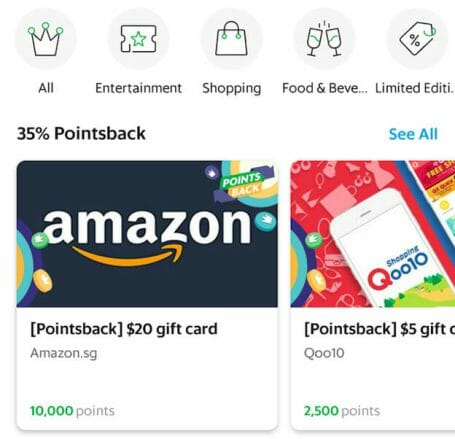 GrabRewards users who redeem the following rewards up till 15 June 2021 will receive a 35% points rebate.

Note that this is a rebate, not a discount– you can’t redeem a 5,000 points voucher if you have 4,000 points, for example, notwithstanding the fact the nett cost of the voucher is actually 3,250 points (65% of 5,000). The 35% pointsback is credited instantly to your GrabRewards balance with no action required from you.

Limited redemptions are available for each of these rewards; it’s not stated explicitly how many, but it appears there’s no cap (or a very high one if any) for STAR$. Expiry dates differ by reward, and you’ll be able to see the full terms before redeeming.

I’d personally go for the STAR$, and remember, if you happen to be a PAssion Card member, you can redeem a S$5 eCapitaVoucher for 4,500 STAR$ instead of the usual 5,000. A total of 10,000 such discounted vouchers can be redeemed per month, capped at two per CapitaStars member. I recently wrote a comparison article of mall rewards programs- check it out here.

How are GrabRewards points awarded?

Back in March 2021, Grab changed the GrabRewards earning structure to further reward users who spent with the GrabPay wallet, as opposed to a credit or debit card. This is basically meant to entice you to maintain a GrabPay wallet balance.

GrabPay wallet balances can now be cashed out to a bank account, provided the balance wasn’t topped up via a credit card. Virtually all credit cards (with an exception or two) no longer reward GrabPay top-ups though, so there’s little reason why you’d want to do that in the first place.

Items go quickly during GrabRewards flash sales (especially STAR$), so I’d look to act on this sooner rather than later. If an item shows “fully redeemed”, don’t give up- it may be restocked later, so keep checking back.

1 GrabRewards point is normally worth 0.2 cents, but with the 35% pointsback I’m effectively getting 0.31 cents per point with these rewards.

seems like no cap for the STAR$ this time round, I managed to redeem 16 times.

thanks! heard the same from a few others too. have updated.

I redeemed STAR$ 75 times so I can attest to this statement.

how do you all have so many grabrewards points, i’m curious to know.

it’s a result of following the Milelion blog very closely 😉

I have been participating in the 20k points challenge. And normally I don’t use the points since there is no urgency to. Unlike cc points, these grab point doesn’t expire. I don’t use points for grabfood or grabride since both are potential transactions for my miles cc anyway. But with the 35% points back event, now I know when to utilize these points! ps. While this is an old method that won’t work anymore, I used to obtain more grab point from rebatemango instead of cashback. This is because they are not-so-reluctant to give out the points so I hardly… Read more »

Did u mean SP Utilities App ? Can’t find it

It’s in the “Rewards” section in the GreenUP section.