Misleading descriptions, a miserly cap, and a whole lot of opportunity cost. All yours, for S$9.99 per month.

If you’ve been exploring the Grab app, you may have come across something under the subscriptions section called the “Rewards Multiplier”. 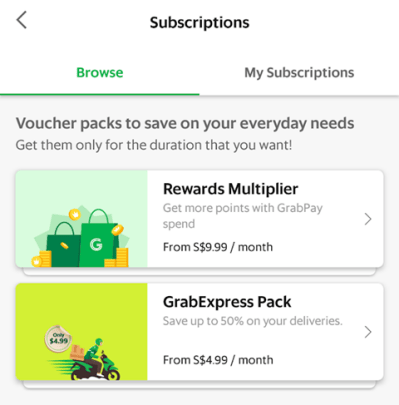 The proposition is simple: Pay a flat fee of S$9.99 per month and earn 4X GrabRewards points, with a S$2 GrabFood and S$2 Grab ride voucher thrown in for good measure.

It may sound enticing, but do some math and you’ll realise it’s better to just scroll past.

How does the Rewards Multiplier work? 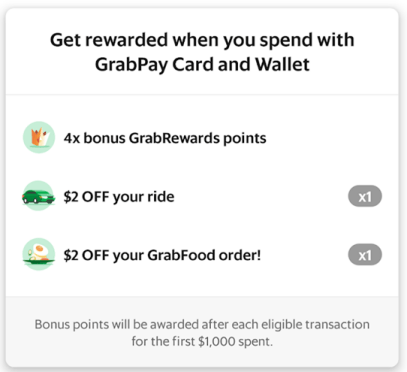 For a S$9.99 monthly fee (no minimum commitment required), Grab users will earn 4X bonus GrabRewards points on all their spending through the GrabPay Card and GrabPay Wallet during that month.

Let’s pause there. When Grab says “4X bonus GrabRewards points”, they don’t mean 4X your usual earn rate. In other words, if you’re a Platinum member earning 6 points per S$1, you won’t earn 24 points per S$1.

What they mean is you earn a flat bonus of 4 points per S$1, on top of whatever regular points you usually earn. This should really be stated a lot more clearly, because I couldn’t find anything in the T&Cs or FAQs. I only learned about it by reading data points on HWZ and Telegram of people who found out the hard way.

Here’s the total points that Rewards Multiplier subscribers will earn, depending on their GrabRewards tier:

The 4X bonus (we should really stop using the “X”, since it’s very misleading) points are capped at S$1,000 of GrabPay Card or GrabPay Wallet spending per month.

Subscribers also receive a S$2 Grab ride voucher and a S$2 GrabFood voucher. Both require a minimum spend of S$10, and you must pay the remainder with a GrabPay balance.

If you think Grab’s throwing in the S$2 Grab ride and GrabFood voucher just because they like you, think again. These vouchers are included because without them, the Rewards Multiplier package is a straight up sham.

Subscribers are capped at 4,000 bonus GrabRewards points per month, which is worth S$8 in Grab vouchers. In other words, it’s impossible to break even on points alone. You’d need to use at least one S$2 voucher to break even, and if you manage to use both, well congrats, you’re ahead by a whopping S$2.

The deal gets even worse when you consider the fact you’ll need to spend S$1,000 through your GrabPay Card or GrabPay Wallet, which entails an opportunity cost in itself (because some of that spending could have been put on cards earning up to 4 mpd).

What about minimizing the opportunity cost by making transactions that wouldn’t normally earn credit card rewards? Grab’s pre-empted you with the following exclusions list:

On first glance, this looks very similar to the standard list of GrabRewards exclusions. But look closer, and you’ll see Grab has added supermarkets and utilities. You probably wouldn’t want to use the GrabPay Card for supermarket transactions anyway (since the HSBC Revolution is much superior), but utilities was a good option since it’s excluded by several banks.

With all these conditions, I simply can’t see why anyone would want to subscribe to the Rewards Multiplier package. 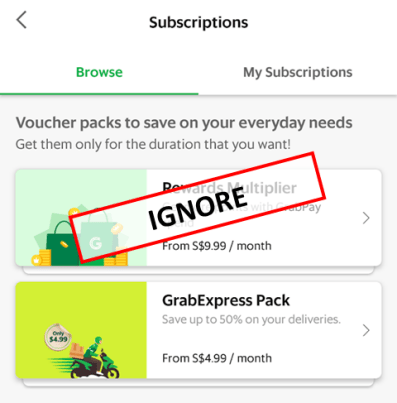 Let’s recap: to come out on top with the Rewards Multiplier package, you’d need to spend S$1,000 on your GrabPay Card/GrabPay Wallet and take a Grab ride or make a GrabFood order. You’d also have to ignore that pesky little voice at the back of your head reminding you about all the miles you’re missing out on by spending with the GrabPay Card.

And even if you do everything right, you’ve benefitted by a grand total of S$2- much wow. I’d say that at S$9.99 per month, the Rewards Multiplier is overpriced by about S$10.

Can anyone else see a use for the Rewards Multiplier package that I’m missing?

I think supermarket is excluded because you can already earn an extra 4 points per dollar under the GrabPay Accelerator promo anyway.

You mean you don’t see the only ones coming out on top is grab and whoever have a hand in their coffers?

Grab is just an epitome of what Corporate Greed and short-term opportunism is.

Just look at how they pushed ahead with Uber merger, how it stopped the monthly packages when Circuit Breaker came into effect, and the endless consumer price increases with the pretense that it is for the benefit of the drivers.

Yea – why has it become the responsibility of the customer to tip or help the driver.

Exactly, fully agree. The only way to help the drivers actually is for the market to collectively refuse to tip, then Grab would have to actually pay them proper wages.

But going by the trend, it looks like our less economically informed will ruin it and bring us into the tipping problem the US is facing.

Can we sue them for misleading products and no proper TnC ?

thanks! have fixed it.

It seems that Grab rewards points are some of the lowest value of any loyalty program on the street. Compared to credit cards which seem to run north of 1% (many considerably higher) the 0.2% for Grab is an outlier. I have accumulated Grab points in spite of, not because I try to – the only merit being to retain status for Grab rides at peak times.

grateful for your analysis of dodgey marketing offers