6 important things to know about the new HSBC Revolution card

Just got your HSBC Revolution? Here's some important things to know about the bonus categories, card mechanics and perks.

As you’ll no doubt have heard by now, the HSBC Revolution has received a new lease of life, thanks to its 1 August makeover.

Gone is the anemic 2 mpd on online shopping and dining, and in its place is a beefy 4 mpd on travel, shopping, dining, transport, and groceries, when paid online or via contactless payments. 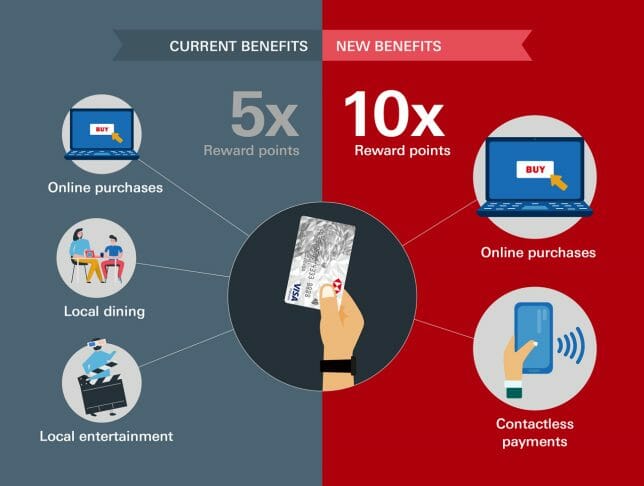 I’ve already applied for and received my HSBC Revolution, and look forward to putting it to work as per my revised 2020 credit card strategy.

Now that I’ve gone through the T&Cs and explored the product in a bit more detail, here’s a few things I think are useful to know.

The HSBC Revolution’s reboot makes it the best dining card on the market, thanks to its wide definition of “dining”.

When you think about it, the following MCCs could all be considered as dining in one way or another:

Despite all the scenarios, most dining cards only reward a handful of the categories above. The HSBC Revolution, on the other hand, lumps them all in. No other dining card on the market has so broad a scope.

But there’s one more feather in the HSBC Revolution’s cap: hotel dining.

This has always been a potential minefield for miles chasers, because it’s unclear whether a given hotel restaurant will code under the restaurant MCC or hotel MCC. The stakes (steaks?) are high- if you use a card like the UOB Preferred Platinum AMEX and the transaction ends up coding as a hotel, you’d earn a measly 0.4 mpd.

There’s no such issues with the HSBC Revolution, because hotel transactions are also an  eligible 4 mpd category.

(2) The bonus on hotels is limited to major chains (Update: not anymore)

Speaking of hotels, there’s a small but important point to note here.

HSBC is defining hotels as merchants with MCCs in the 3501 to 3999 range. As this MCC guide shows, that’s a very substantial list of hotel brands, including every major and mid-sized chain you can think of.

At the same time, however, it’s not all-encompassing. There are smaller chains or hotels which may not have an MCC of their own, instead falling into the catch-all MCC 7011: Lodging- Hotels, Motels, Resorts.

That was the case for the Mandarin Orchard Singapore, in my recent experience. Had I charged this transaction to the HSBC Revolution, I would not have earned 4 mpd. 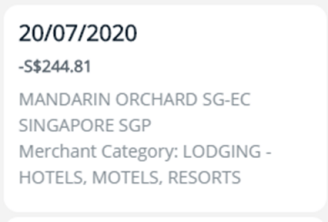 It remains to be seen whether this is an oversight or deliberate; I’ve asked HSBC about it and will update if/when I hear back.

While “transport” is a 4 mpd category for the HSBC Revolution, this only refers to MCC 4121: Taxicabs and Limos (i.e taxi, Gojek and Grab rides).

This does not cover public transportation (MCC 4111), nor does it cover petrol (MCC 5541). If these are important categories for you, check out the cards below:

Cold Storage, Giant, Jasons and Market Place were always tricky ones for miles collectors. These supermarkets all had contactless terminals, but they were also UOB SMART$ merchants. This meant you wouldn’t earn 4 mpd with your UOB Preferred Platinum Visa- instead, you’d receive a pathetic 0.3% SMART$ rebate.

Most people just defaulted to their general spending cards here, a real shame since groceries could be a significant chunk of monthly expenditure.

The HSBC Revolution fixes this issue, awarding 4 mpd on all supermarkets under MCC 5411. No SMART$ shenanigans to worry about.

(5) HSBC Points don’t pool, but you only pay one conversion fee

HSBC’s points system works a little differently from other banks.

First  of all, HSBC points do not pool. If you hold a HSBC Revolution and a HSBC Visa Infinite card, you will not be able to combine your points for redemptions.

That’s because HSBC adopts an annual mileage program fee that costs S$42.80 for unlimited conversions over a 12-month period, either to KrisFlyer or Asia Miles. Regardless of how many HSBC credit cards you hold, only one fee is applicable, hence non-pooling becomes less of an issue.

Where it would become an issue is if you were shy of the 25,000 points block for a conversion- you can’t tap into the points balance of another HSBC card to make up the difference.

(6) It doesn’t come with a full-fledged Entertainer

HSBC principal cardholders receive a complimentary copy of The Entertainer, an app with thousands of 1-for-1 dining, drinks and recreational offers.

While this is a great perk to have, the HSBC Revolution’s version is a slightly scaled down one, as the table below shows. 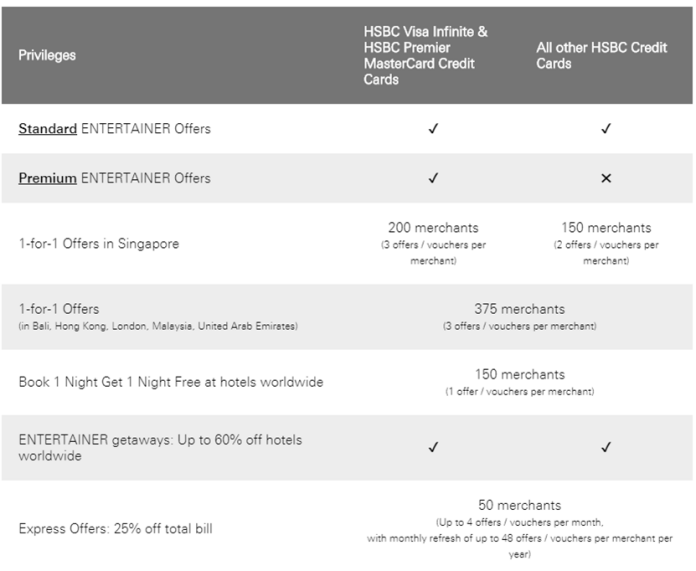 There are fewer merchants compared to the version that HSBC Visa Infinite cardholders receive, and you’ll only have access to the “standard” offers. What that means in practical terms is you won’t get deals like Bedrock Grill or Fat Cow (these used to be included but have since been scrapped).

It seems churlish to complain, since there’s no annual fee for the HSBC Revolution anyway. That said, it’s still worth noting.

While there’s no shortage of 4 mpd cards in the Singapore credit card market, few will cover as many everyday spend categories as the HSBC Revolution. I think it’s absolutely worth getting even if you already have the UOB Preferred Platinum Visa, because it allows you to save the latter’s less restrictive 4 mpd cap.

Any other quirks of the HSBC Revolution you noted?

HSBC Balance transfer at only 1.68% p.a for 6 mths for new Revo Or advance members

Hold on. Shouldn’t you make it clear this is the best dining card on the market only if it’s a contactless payment? Many restaurants are still swiping the old fashioned way (with signature) and I don’t believe these will earn 4mpd.

i think it’s stated quite clearly below the table that it has to be contactless.

perhaps it’s just the places i frequent, but i haven’t been to a restaurant that didn’t take contactless for a long time.

So quick to judge

But yes, be careful you don’t absent mindedly pass the card to the waiter at the end of a wine-fuelled evening! Could see that happening

May I kindly know is there any transaction limit for contactless payments?

Not for a very long time already

Awesome! Will apply this card right away. As a guy without a spouse, I was always super bummed out that I can never get 4mpd for dining.

This card is the savior!

I am just a little disappointed that Google Pay (or Samsung Pay for that matter) is not supported for Android users like me. That’s the only reason why I am still using UOB PP Visa.

it won’t hurt to just carry one piece of plastic

Depends on your wallet strategy. I like to to keep my wallet as thin as possible.

Aaron, please pitch to hsbc to include petrol MCC in the 4mpd list.

Join to confirm, i don’t have apple pay, will i still be able to get 4mpd by contactlessly swiping the physical card for all the mentioned transactions above?

You didn’t read the article clearly ? But answer is YES else android users all died ?

Is calling the bank the only way to get the code to activate Entertainer?

If you dont want to call them, you can try their online chat function at their site

Just checking, isnt booking.com/agoda.com etc. those sort of websites under MCC 4722 instead of MCC 7011? In that case those would also earn 4mpd?

actually i think you’re right. 4722 is expedia, so it stands to reason that hotels.com should be there too.

Seems many hotels don’t take contactless
w Sentosa and capella dont 🙁
They only take traditional chip credit cards
Which card should we us then?
Uob privi 1.4mpd?
Anything else better?

Uob lady’s card with travel as your 10x category. Failing which it has to be a general spending card

Hi Aaron doesn’t UOB PPV and VS also qualify for 4mpd for dining when paying via contactless payment? (subject to the 5 dollar multiples and 1k min spend for VS). Just wanted to understand why hsbc revolution is the best dining card when those could also be used. Thanks

yes they do, and you can use them. but they’re not dedicated dining cards.

i mean, by that token you might as well say the uob ppv/vs are the best dining/shopping/car repair/hairdresser/etc cards, simply because they earn 4 mpd so long as there’s contactless.

it’s much better to save that valuable flexible 4 mpd cap for places where other dedicated cards don’t exist.

Aaron, how long did it take you to get the card? What was the process like? I applied through you link via their online system, which requires download of their app and links to MyInfo, so they get all my data – then was advised by the app the application was being processed and I would hear.

Two days later I get an email from HSBC asking me to manually upload all the same documents to their website. I’ve never had to do this with other cards and frankly cant be bothered.

i think they’ve changed the application process, and not for the better. i applied in early July, and got the card within 5 working days or so. it didn’t force me to download an app, i could do it all via desktop.

now i think they’re forcing everyone to go via the app, but the problem is the customer journey is kind of crap. shows what happens when you force fit technology…

Update: so I get another email today telling me card is approved and will be sent out. If that’s the only glitch then its not the end of the world. Cheers

it will earn 4 mpd

got a quick question, how about telco bill? I just check it’s terms and conditions and i didn’t see telco bill on the ineligible list… so I can earn bonus points with this card?

it goes by white list, so you need to see telco’s mcc on the list to earn the bonus miles.

i’m on the HSBC premier entertainer and I don’t have the atas restaurants either. They’ve removed fat cow, bedrock grill etc. I didn’t search for other fancy restaurants, but I do get 3 1 for 1 uses instead of the regular 2.

Paywave function on this card keeps failing and I’ve had to call twice now to get a new one. Anyone else experiencing this?