The latest GrabPay Power Up Challenges are out, and although they're less generous than last month's, it doesn't hurt to register.

Grab has launched its latest set of GrabPay Power Up Challenges, which award bonus GrabRewards points to users who complete a certain set of tasks.

The latest challenges run from 15 July to 14 August 2021, or until all rewards are redeemed (which usually happens first). You must opt-in to participate, either via the banner on the home page of the Grab app or under Account ➔ Challenges 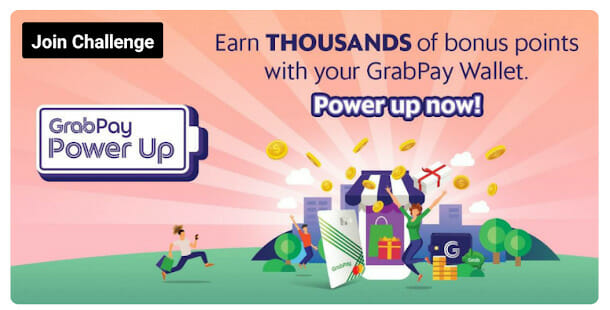 The GrabPay Power Up challenge involves topping-up the GrabPay wallet and making a certain number (and volume) of transactions.

Offers are targeted, and different people will see different permutations. Here’s the ones I’m aware of:

The bonus GrabRewards points are given on top of the base points you normally earn, i.e. 3 pts/S$1 for Member/Silver, 4.5 pts/S$1 for Gold and 6 pts/S$1 for Platinum.

Given a value of 0.2 cents per GrabRewards point, your effective rebate (including base points) for completing the challenge looks like this:

I was targeted with Offer 1 this time round, which looks fairly easy to finish. As a general rule, the higher your spending requirement, the less attractive the offer not just in terms of rebates, but the opportunity cost of diverting spend away from 4 mpd cards.

At least the Grab interface shows (in real time) exactly how many rewards are left, so you don’t go spending to attain something that’s already not available (ahem UOB ahem).

What spending counts towards the challenge?

The following MCCs are also excluded:

In an ideal world, you’ll minimize the opportunity cost of using GrabPay by clocking your minimum spend with transactions that don’t earn points with credit cards.

However, many GrabRewards exclusions now overlap with banks’. For example, charitable donations, education, and insurance transactions will not be eligible for GrabRewards points or the Power Up Challenge. This leaves a very narrow range of transactions where using GrabPay entails no opportunity cost. The two I can think of are:

What card should I use for GrabPay top-ups?

While the vast majority of credit cards no longer offer rewards for GrabPay top-ups, there are four exceptions I’m aware of:

Using any other credit card to top-up your GrabPay balance is pointless (literally).

FYI: Grab had originally intended to add a S$1 admin fee to all top-ups of less than S$400 made with a Visa credit card, but is temporarily suspending this until further notice.

If you were targeted with Offer 1 & 2, I wouldn’t worry too much about opportunity cost since the effective rebate is high enough (especially when you factor in the double dip from selected credit cards).

The other offers are much harder to justify going out of your way to accomplish, and I wouldn’t bother.

Any other GrabPay Power Up offers you received?

I rec this too.

Do payments on Fave via GrabPay credits count?