Taiwanese luxury airline startup STARLUX has announced that it will commence service between Singapore and Taipei from 23 September 2021.

This is a particularly exciting development, given the airline’s premium branding and the fact that Taiwan is a likely candidate for SHN-free travel once Singapore reopens its borders in September.

STARLUX is headed by Chang Kuo-wei (the former Chairman of EVA Air), and unlike many other airline startups, has decided to go down the full-service route instead of budget. It bills itself as a “detail-oriented luxury airline”, aspiring to be “the Emirates of Taiwan”.

To that end, they’ve adopted a premium approach to everything, from their seats to their uniforms and lounges. Menus are designed by Michelin-starred chef Lam Ming Kin, and they even plan to add First Class once their A350s arrive.

STARLUX launched its first flight in January 2020 between Taipei and Macau (a heck of a time to start an airline), but was forced to suspend operations in March 2020 due to the COVID-19 pandemic. Thankfully, it’s resumed operations since, and is currently serving Macau, Osaka, Tokyo and Penang, among other destinations.

STARLUX will commence three times a week service between Singapore and Taipei on 23 September 2021, with flights on Tuesdays, Thursdays and Saturdays (except 25 Sept).

Fares have already been loaded, with round-trip Economy and Business Class fares on the inaugural flight starting from S$528 and S$2,488 respectively. Unfortunately, STARLUX is currently not part of any airline alliance, so there won’t be opportunities to redeem miles for flights.

STARLUX fits 188 passengers onto its A321neo aircraft, with eight in Business Class and 180 in Economy Class.

The aircraft is meant to be equipped with Wi-Fi (free for all passengers), but STARLUX will not activate the system until 2022.

Lucky from OMAAT has (of course) reviewed STARLUX already, and the full report is well worth a read.

STARLUX is using Collins Aerospace Diamond Seats for its Business Class cabin, with further customization by BMW’s Designworks Studio (if the finishings look familiar, that’s because Singapore Airlines also engaged them for their First Class seats on the B777-300ER).

Seats are configured in a 2-2 layout, and convert into full flat beds measuring 82″. Guests receive in-flight bedding with skin-friendly cotton, and can enjoy movies on a 15.6″ 1080p inflight entertainment screen.

That’s an excellent product to offer on a ~5 hour flight, although Singapore Airlines also has flat beds on the same route with its B787s.

STARLUX calls its VIP lounge in Taipei the “Galactic Lounge”, and it certainly looks the part. It’s open to all Business Class passengers, as well as COSMILE Explorer and Insighter members (see below for how you can get a status match).

Guests get all the usual lounge amenities, including comfortable seating and a buffet with selected a la carte dining (Haagen-Dazs ice cream too). However, the lounge lacks a bathroom or shower, which is hopefully something they’ll be addressing soon. 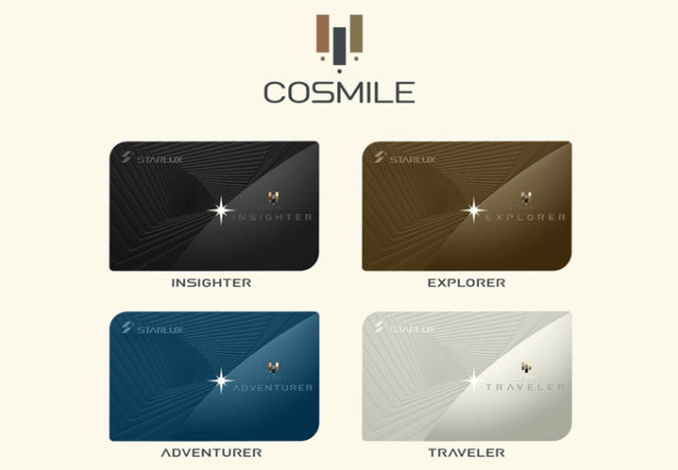 STARLUX is currently running a status match to their COSMILE loyalty club, open to elite members of any other airline frequent flyer program.

To get your status matched, you’ll need to :

STARLUX says that the proof of completed flight must be “a detailed record sent from the airline, or from the official website/app of the airline. The flight record must include the departure date and origin/destination; e-tickets, receipts, and other proof of purchase or documents that cannot prove that the flight has actually been taken cannot be accepted.”

I reckon it’s going to be hard to find someone who flew in the past 12 months, but if you happen to fall in that crowd, well…

STARLUX will take up to 30 business days to verify your application, and if approved, your status will be valid for two years.

The other thing to note is that STARLUX only intends to match the highest and second highest tier of an airline’s frequent flyer program. I’m not quite sure how that will work for KrisFlyer- will Solitaire PPS and PPS Club be seen as the two highest tiers, or can KrisFlyer Elite Gold members also join in the fun? The only way to find out is to try, I suppose.

Here’s the benefits that COSMILE members can look forward to.

It’s exciting that we’ll soon have another high quality option on the Singapore Taipei route, and from the looks of it, STARLUX could give China Airlines, EVA Air and Singapore Airlines a run for the money.

While I’d certainly like to review this product, it’s going to be tough as long as they’re not affiliated with any airline alliance.

Anyone plans to try out STARLUX?

No aisle access in j is a bummer, although it’s as good as you can get on a narrowbody

Not to mention Starlux’s J pricing is hardly competitive relative to how SQ J is pricing in September. Unlike their maiden PEN-TPE route, I wonder what their value proposition is on a SIN-TPE route that’s relatively well served by SQ and BR.

I used to travel to TPE quite a bit for work and the Y price could get pretty high, especially around weekends so they should do OK. Though the times aren’t business / weekend break friendly with the need for a hotel night and then most of the working day wasted on the flight back but TPE never had ideal flight times anyway TBH on any carrier

I got status matched to my Marco Polo Diamond status last year, admittedly, just for the cheap thrill. The Insighter black card came in a fancy box (rather wasteful, to be honest). The card is made of serious metal thicker and heavier and more professionally and cleanly cut than the OCBC Voyage metal (28g, to be exact), fancily engraved. Starlux does admit upfront in its welcome email that the card is for “commemorative purposes only”, and really, just one’s member ID number or, at most, the e-card is sufficient 🙂 Now, will oneworld court them successfully, or will Cathay put… Read more »

I love that they bothered to make a metal card- even life solitaire members don’t get such things!

You should have 4 year validity for Cosmile Insighter if you applied last year… Being kiasu I quickly status matched my KFEG last year during Circuit Breaker while my account still showed some flying activity including to Taipei.. Quite lucky I was matched for Cosmile Explorer and it was valid for 4 years. Didn’t receive any physical card though, only e card in the apps..

Yup they miss one saturday on 25 Sept!

Someone
Reply to  Jay

I’ve stopped visiting his site following the terrible layout change, but the acronym should read OMAAT.

yes, the new site layout is rather unfortunate. don’t know what he was thinking.

It was apparently done to improve SEO, and to push more referral products on the homepage during a period of travel downtime. They could certainly have achieved the former with a better UI and colour scheme.

that site UI is a flaming wreck inside a garbage bin that’s rolling down the street. I have completely stopped reading OMAAT because I don’t know what are the latest articles, news, reviews, and frankly that garish color schemes hurt my eyes and give me epileptic seizures. I think he was given enough negative feedback on the new site UI but he chose not to listen.

I hope there are more return flights in the future. The 9.20am slot is brutal.

Used to have CI751 flying TPE-SIN-SUB with afternoon departure ex-TPE at 14:30. But otherwise for late departure out of TPE must always choose Singapore based carrier, eg Singapore Airlines, Scoot or Jetstar Asia (before discontinued).

I’ve taken the CI flight once, it sucked. Do you know why Taiwan-based carriers are so early? SQ flights are at a very reasonable 1PM.

The Taiwan based carriers are early because of 2 reasons: Their plane originate in Taipei, so naturally leave Taipei early. It works with their scheduling banks… 2a. Their flight from the USA arrives in Taipei early morning probably between 5-6:30am, so to minimise connection time to South east Asia, the onward departure to South East Asia (SEA) leaves early in the morning. 2b. Some of their banks of flights to the USA departs in early evening around 5-7 pm so to make the connection works, so some the flights from SEA would return before that. Majority of their banks of… Read more »

Hi David, thanks for the explanation! Interesting points for 2a/b….I’m curious if they’re code-sharing with other airlines as Starlux doesn’t fly to the US yet.

Interestingly, they don’t have codeshare in plan though. JX is pending to receive their first A359 and let’s see which will be the first approved US destination under JX flight as it could land at 15 airports.

No code-share yet as far as I know. Code share is limited now given no transit is allowed through Taipei during the pandemic period. Nonetheless, Starlux has always wanted to build a connection network in Taipei just like what Emirates do in Dubai. So we shall see how Starlux build its network to optimise its transit banks.

If I’m paying for the trip myself in cash, I’d probably choose to fly PEY with BR: price usually similar to SQ economy standard or flex fare, get to accumulate 100% miles, get more comfortable seat. 😂
If I’m redeeming miles, I’d probably indifferent to SQ35 or BR215 business class.

Can we redeem Voyage Miles for this maybe?

As for the flight timing….

Not so good for tourist, but might works for biz travelers.

AM SG Office, fly in and have a good rest before work next day.

Leaving TPE AM, upon arrival still have time to go SG office