United's premium transcontinental service is a step up from the usual domestic first class.

I’ve mentioned before that domestic first class in the States is nothing to get excited about, but there are certain transcontinental routes that see high volumes of business traffic and therefore get special treatment. Examples include San Francisco/Los Angeles to New York and Boston to San Francisco, where I was now heading after spending the week freezing my butt off in sub-zero weather.

On these routes your first class (it’s technically called Polaris now, but I’m going to use the terms pretty much interchangeably) experience is much closer to that of a genuine premium cabin, with flat bed seats, decent onboard F&B and upgraded amenities like lounge access (normally not granted to first class flyers on domestic routes) and amenities kits. The crew might even be contractually obliged to smile at you now and then.

My flight was scheduled for a 12pm departure and I made it to the airport about two hours beforehand. It’s good I arrived early, because CWT, in their infinite stupidity (are you sensing a trend yet?), had forgotten to revalidate my ticket after I requested a simple date change. A date change on a RTW ticket is usually something that can be easily done with a call to the RTW helpdesk. And yet it’s something I was now not able to do by myself thanks to our new corporate policy that all requests had to be routed via CWT. Oh, and to add insult to injury, CWT charges a fee for a date change, when the fare rules of RTW tickets are such that date changes without route changes should not attract penalties.

The area manager had to get involved and we spent about 30 minutes puzzling over computer screens and on the phone with CWT trying to get them to do their job properly. Ah, CWT. It’s like the herpes of corporate travel.

With all that done, my bags were tagged to SFO, boarding passes were issued and I breezed through security thanks to my TSA Precheck status, which you get thrown in with your application for Global Entry.

I believe the United Club at BOS is one of those which has had a cosmetic makeover, and I do like the lights they have perched over the bar (anyone knows what the proper name for those lights are?).

But while the lounge decor may have been madeover, the food options unfortunately had not. The breakfast spread was the continentalist of continentals, with cereal, fruit, muesli, bagels and nuts.

Hungry for a proper meal, I abandoned the lounge and headed over to the Legal Seafoods branch in the main terminal. Yes, it’s a chain, but it serves reliably decent stuff.

I settled on a lobster roll, then got a side of avocado because I felt guilty about said lobster roll.

Boarding started surprisingly early- I was hoping to be first in line to grab some cabin shots, but when i reached the gate at 11.15 (12pm departure) I found that boarding had just started and I was the last in Zone 1. And here I though AA was the only airline obsessed with D0…

United uses a standard B/E Aerospace Diamond seat on its domestic 757 flights, the same which you’ll find on United, Thai and selected Ethiopian B787s, United B767s, Air China B777s and Qatar A320s. I’ve reviewed the seat quite a few times previously so I won’t go into too much detail here, suffice to say that this may not be an impressive long haul product, but it’s a welcome step up from the usual domestic First Class recliner seats.

The cabin got real full real fast, and quite a few of these passengers had been upgraded due to their status (you can see quite clearly on each United departure screen who has been upgraded and what seat they’re occupying). I still think it’s a delightful novelty to see full flat seats in a narrow body aircraft. Maybe one day Silkair will have these?

As I mentioned I’ve already reviewed the features of this seat in detail before, so I’m just going to do a quick run down.

Seat controls are found in the shared armrest, which is also where the reliably sturdy tray table pops out from.

Each passenger also gets a decent pair of headphones.

Each seat has one Empower outlet and a USB charging port.

The narrow cabin means there’s not much in the way of in seat storage, but there’s a nook by the side of your head that can fit a small laptop or accessories bag. It clearly says “no stowage during TTOL”, but the crew didn’t care.

The most noticeable upgrade ever since the launch of Polaris is, in my opinion, the upgraded Saks Fifth Avenue pillows and blankets. The blanket is amazing. It’s warm, yet smooth and non-scratchy. I absolutely loved the way it felt against my hairy legs (sexier words have not been spoken).

The crew came around to offer pre-departure beverages, and I went for orange juice. I’m not entirely clear about the rationale behind serving PDBs in plastic cups before switching to the regular glassware once the plane has taken off, but plastic doesn’t exactly scream premium airline. To be fair, United isn’t the only airline guilty of this- even an airline as amazing as ANA does plastic cups on the ground so maybe there’s something more to the picture I’m not seeing.

Say what you will about United, but they’ve got some interesting safety videos. They’re the official airline for Team USA, and with the ongoing Winter Olympics they’ve put together a special pre-flight video reminding everyone that United is more than just the gold medalist in the “doctor drag” team event.

The safety video is played on individual seatback IFE screens, which were bright enough to compensate for the harsh sunlight streaming into the cabin.

A quick taxi and takeoff roll and we were hightailing it out of BOS before the afternoon winter storm hit.

Once the captain turned off the seatbelt sign, the crew came around to offer every passenger a Moscow Mule, apparently one of United’s signature drinks. And no, the crew aren’t mixing cocktails in the galley- these drinks are offered courtesy of a partnership with Crafthouse Cocktails, with the cocktail coming in a bottle already pre-made. All the crew does is pour it into a glass with ice, add a lime and a skewer of candied ginger. This was served with the usual ramekin of hot nuts.

After all the Moscow Mules were served (I think the crew are instructed to push that out first), regular drinks orders were taken. United has a surprisingly large liquor selection in the domestic First Class cabin:

United does not serve champagne on domestic routes- instead a perfectly passable prosecco is offered.

The stewardess also came around to take meal orders- I was curious to see the sequence in which she proceeded because it’s my understanding that North American airlines in general are better at giving priority for meal choices to top tier elite members. In other words, Global Services, 1K and Platinum members should get first pick, followed by everyone else. To my surprise, she adopted a more egalitarian approach, progressing by seat number. Perhaps on the back end they prioritize meal choices of elite members if they run out of something.

Everyone was asked to give a first and second choice. I went with the chicken as my first, and steak as my second. The meal started with a salad, euphemistically described as a “spring mix” in the menu. It was bland and lifeless, and I’m struggling to understand why airlines still bother with salads these days. The chilled appetizer of goat’s cheese and mango relish on pumpernickel wasn’t much better.

I ended up getting my first choice for my main, cajun chicken breast with a smoked tomato sauce.

Visually, it was a big step up from what I was used to on domestic First Class flights. Taste wise it was so-so. Despite United’s much vaunted partnership with the Trotter Project, there’s really only so much you can do for airline chicken.

The highlight of the meal service by far is something that United has been doing all along: the sundae cart. Think about it- sort-of-premium vanilla ice cream, with your choice of hot fudge, caramel, nuts and chocolate sprinkles. What’s there not to like?

I fiddled around with the IFE system after the meal. United has the old style IFE controllers, and there are two options available- passengers in first class get seatback IFE, while passengers in both classes can stream entertainment onto their personal devices via the aircraft’s Wi-Fi.

There’s a very decent selection of movies, including some that were on my to watch list like Victoria and Abdul and Three Billboards Outside Ebbing Missouri.

No prizes for guessing what I watched:

The Wi-Fi on this flight was pretty pricey- US$40 for the entire flight (5 hours) or US$20 for 2 hours. That said, the connection was pretty solid given we were flying over the mainland US the entire time.

The 757’s bathrooms are really, really old. Remember those taps with the two metal prongs you push for hot and cold water? And the stainless steel countertops of yesteryear?

At least there were very nice Cowshed amenities.

The most interesting thing about the loo was that it used the blue liquid instead of a vacuum flush. That’s how you know the plane you’re on is old.

Through the mid-1980s, airplane toilets used Anotec, the blue deodorizing liquid you see in the bottom of Port-a-Johns, to push waste from the bowl into onboard storage tanks. Electric pumps actively drove the process, circulating fresh fluid through with every flush. While certainly a step up from buckets, these systems posed some significant drawbacks. Planes, for example, had to haul hundreds of gallons of Anotec on every flight, which increased their fuel consumption and reduced the number of passengers they could carry. In addition, early Anotec formulas were formaldehyde and bleach-based, which are severe eye and skin irritants.

Closer to landing a second cold meal was served. It was evidently some kind of turkey wrap and it was awful. 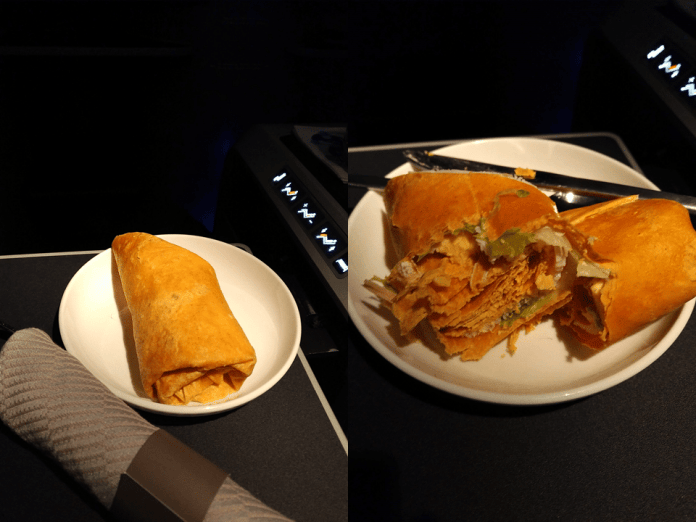 Fortunately they also came around with the remnants of the snack basket, which had Ghiradelli squares and Albanese gummy bears. Gluten free, so they must be good for you. 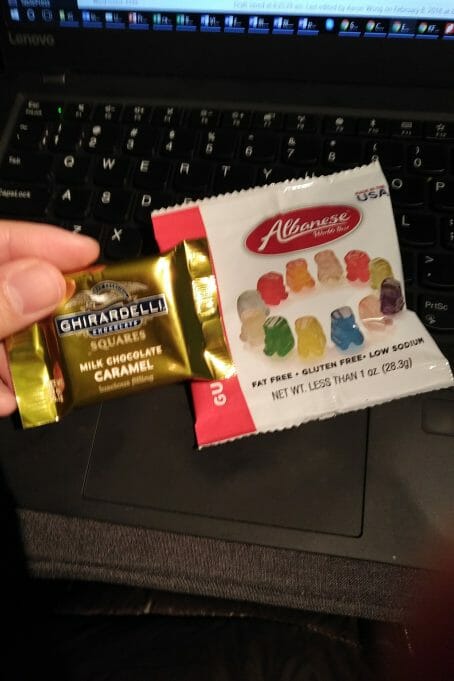 United’s premium transcontinental service is a welcome step up from domestic first. The biggest advantage by far is the seat, which would be a godsend on a red-eye flight. It’s not the most private or luxurious of hard products, but give me this over a recliner any day of the week. The catering is passable, if not spectacular, but special mention for the sheer variety of drinks. The best thing I can say about the service is that it was unmemorable- I have this constant fear of being scolded by an irate FA on a domestic US flight and so far those fears have been unfounded.

And this brings me to my final stop of the 2018 RTW trip: San Francisco!

Aaron Wong
Aaron founded The Milelion to help people travel better for less and impress chiobu. He was 50% successful.
Previous articleEarn up to 25,000 bonus World of Hyatt points with Hyatt’s latest promo
Next articleWhat’s it like renting a car as a Hertz President’s Circle member?