March offer: Earn up to 13 mpd on KrisShop purchases via Kris+

From now till 31 March, earn 9 mpd from KrisShop via Kris+, plus up to 4 mpd on your credit cards.

In December last year, Kris+ added KrisShop as an earning partner, allowing customers to shop directly from the Kris+ app. To celebrate the tie-up, users could earn 9 mpd on KrisShop purchases made via Kris+, in addition to up to 4 mpd from their credit cards.

Kris+ has now brought the promotion back again for the month of March.

Earn 9 mpd on KrisShop via Kris+ 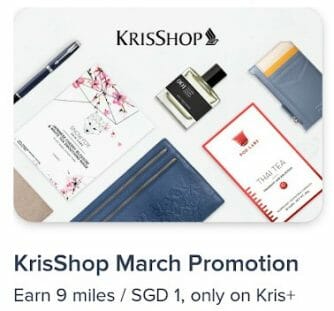 From 2-31 March 2022, customers will earn 9 mpd on KrisShop purchases made via the Kris+ app, with no cap on the maximum miles that can be earned.

As a reminder, KrisShop via Kris+ only works for purchases to a Singapore address, and does not (yet) support the 10% discount for PPS Club members or PPS Club gift voucher redemption. The selection of items may also be smaller than what you’d normally find on KrisShop.com

A summary of the differences between shopping on KrisShop.com and KrisShop via Kris+ can be found below.

A link to KrisShop can be at the top of the Kris+ app homepage. 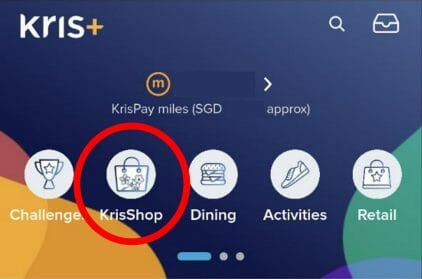 Don’t forget to transfer any miles earned on Kris+ to your KrisFlyer account immediately. If you wait more than seven days, these miles will be stuck inside Kris+, where they expire after 6 months, and can only be spent at a puny 0.67 cents each!

KrisShop purchases with code as MCC 5309 Duty Free Stores, even if you pay via Kris+.

Using the following cards will earn you an additional 4 mpd, creating the opportunity to clock up to 13 mpd on your purchases.

Kris+ has brought back its lucrative 9 mpd offer on KrisShop purchases for the month of March. While I’m not convinced that every item on KrisShop represents a great deal, the prospect of earning 13 mpd on your purchases (once credit card miles are factored in) may help offset some of the higher prices.

This runs concurrently with the 9 mpd offer at almost 300 dining and shopping merchants across Singapore, so there’s plenty of hay to be made with Kris+ at the moment.

Does this happen to anyone? I have 10 cards registered with Google Pay but every time I try paying on Kris+, only 5 random cards will be available for selection in Google Pay and the other 5 are greyed out with the message “not accepted here”. Very frustrating when my preferred card cannot be used.

Krisshop not the cheapest place to shop and takes a bit of time to find the decent deals…if any. Nevertheless still a decent offer of up to 13 mpd excluding GST. Used to be an even better deal with Elite miles and PPSValue. However, it has drop a notch without such shorter term enhancements.