SIA's narrowbody Economy Class addresses many issues from the SilkAir days, though the tight seat pitch and absence of in-seat power may become problems on longer flights.

For my Da Nang trip, I booked a mixed Business/Economy itinerary just so I could review both cabins on Singapore Airlines’ new Boeing 737-8 (formerly known as the MAX 8, renamed for obvious reasons).

Having flown Business on the outbound leg, I’d be returning to Singapore on SQ171 at the back of the bus.

First things first: any way you look at it, Economy Class seats on Singapore Airlines’ B737-8s are a quantum leap forward from the SilkAir days.

Each seat has a personal IFE screen, USB charging, and Wi-Fi access, which allows you to stay connected throughout the flight. That shouldn’t be taken for granted, especially given the low horizons other regional carriers are setting for short-haul Economy Class.

There are a total of 144 Economy Class seats, configured in a 3-3 single-aisle layout. These are 18″ wide and built by Collins Aerospace, and although they look visually similar to the seats used on the B787-10 and A380-800, they’re actually a new design.

The Economy Class cabin stretches from Rows 41 to 64.

Rows 41-45 are designed as Forward Zone seats, deemed more lucrative because their proximity to the front allows passengers to disembark first. These can be selected for free by Solitaire PPS Club, PPS Club and KrisFlyer Elite Gold members; all other passengers will pay upwards of US$15 depending on route. Do note that Rows 44 and 45 lack windows.

The emergency exits in front of Rows 48 and 49 make these Extra Legroom seats. However, they also mean that Rows 47 and 48 cannot recline (so as to avoid blocking the exits), leaving Row 49 as the real sweet spot. Row 49 seats are free for Solitaire PPS and PPS Club members to select; all other passengers will pay upwards of US$25 depending on route.

That’s the row I selected for myself and The MileLioness.

Seat pitch is 30″ for non-exit rows, versus 32″ on Singapore Airlines’ widebodies. For perspective, narrowbody seat pitch on budget carriers ranges from 28-29″, and 30-32″ for full service carriers.

30″ is tolerable on a flight like Da Nang, though it’d bite more on medium-haul routes. If it’s any consolation, there’s no under-seat IFE box to eat into your legroom.

Each row has its own adjustable air vents, overhead light and call button.

The seat back is made of hard, black plastic. While Economy Class passengers on SIA’s widebody aircraft enjoy a seat back cupholder, that’s been omitted from this particular seat.

Every seat has its own 10″ high definition touch-sensitive IFE screen, with the same KrisWorld content you’d find on any other SIA aircraft. There is no IFE remote, so pressing the screen is the only input option. This might be an issue if the person behind you is inclined to press particularly hard, though I had no problems on my flight.

On the bottom of the IFE screen are a USB charging port and a headphone jack. You can plug in your own 3.5mm headphones if you wish.

Unfortunately, Singapore Airlines decided against installing in-seat power in Economy Class, a strange omission in this day and age. I know this aircraft is mainly designed to operate short-haul routes, but it’s also flying to destinations as far afield as Cairns (6.5 hours), and not everyone boards with a full battery anyway. Even a 3 passengers to 2 plugs compromise would have been acceptable; as it is, this is a decision we’ll have to live with for many years.

The tray table flips down from the seat in front of you, and has a cupholder moulded into the grey plastic.

It should probably not surprise you that the tray table’s footprint is too small for a laptop, and part of it will hang off the edge. If seat in front of you is fully upright, you can still make reasonable use of your it…

…but if the seat is reclined, it becomes almost impossible.

Also note that your laptop screen will tuck beneath the IFE screen’s plastic shell, which means you need to be extra cautious. One sudden move from the seat in front, and your screen could be badly damaged (an issue with Economy Class seats in general, mind).

For passengers in emergency exit Rows 48 and 49, the problem becomes quite the opposite. The tray table only telescopes so much, so you’ll need to stretch out your hands and lean forward to type.

The pilot announced today’s flight time of 2 hours and 25 minutes to Singapore, covering a distance of about 1,690 km. We received a quick briefing from the cabin crew on operating the emergency exit, after which the plane pushed back and taxied to the runway.

After take-off, I connected to the onboard Wi-Fi network. PPS & KrisFlyer members are entitled to free access, provided they entered their membership number at the time of booking or check-in (i.e. it needs to appear on your boarding pass). If you forgot to do this, it’s too late to do anything once on the plane.

Once the free access is exhausted, you can pay out of pocket for the following packages (unfortunately, the Citi Prestige’s Boingo Wi-Fi no longer works with KrisWorld’s Wi-Fi network):

Wi-Fi speeds were sluggish, though sufficient for basic surfing.

Lunch was served about 30 minutes after take-off.

Paper menus have long disappeared in Economy Class, but passengers can connect to the onboard Wi-Fi network to view the digital inflight menu (no Wi-Fi subscription plan is required). 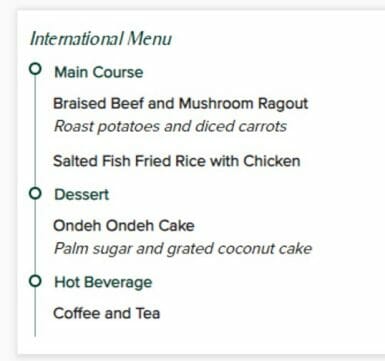 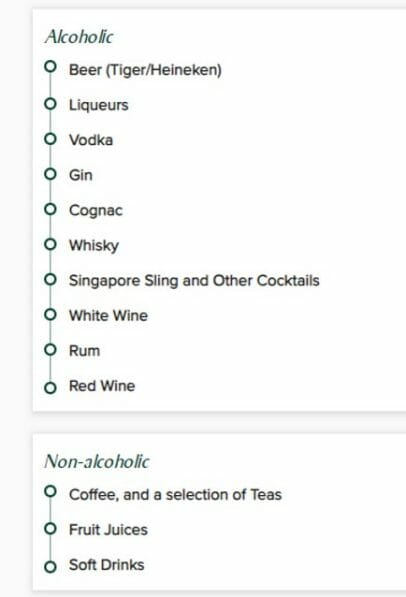 This, quite frankly, is a love-it-or-hate-it thing. Even though there are numerous environmental benefits of the new meal concept, the “take-out box” optics don’t come off very well, as I’ve covered in the article below.

SIA temporarily reverted to the old-style meal concept for a few months due to supply issues with the boxes, but it looks like they’ve sorted that out. Lunch was a choice of salted fish fried rice or braised beef and mushroom ragout, both paired with ondeh ondeh cake.

The bamboo cutlery set consists of a fork and spoon (no knife, which means all proteins have to be pre-cut into bite-sized chunks), though the shallow spoon is not very good for scooping. Likewise, the mouth of the box is rather narrow, and the top flap tends to get in the way unless you tear it off or wedge it against something.

Somewhat surprisingly, the Western option of beef was way superior to the Asian option of fried rice. The fried rice was bland, and had little to no protein. On the other hand, the beef was seasoned nicely and came in a generous-sized portion.

After the trays were cleared, I paid a visit to the lavatory. Toilets on narrowbody aircraft are cramped as it is, and the B737-8 is no exception. There was barely enough space to take a photo.

The sink is noticeably smaller than on a widebody, and there’s also no touchless technology to be found. Everything from the flush to the tap to the bin requires manual touch.

I took a brief spin through the KrisWorld system, in particular the Live TV channels featuring broadcasts by the BBC, CNN, CNBC and Sport24. The signal quality (beamed from satellites) was strong, with no discernible buffering.

In the short time left to landing, I fiddled around with the new Arc software by Panasonic Avionics, which enhances the inflight map experience with geo-triggered information. That’s in theory at least; based on my exploration, it felt just like any other inflight map, albeit with a new UX.

Some of the more fun features include the ability to toggle a window view and a HUD view. It’s not quite Emirates’ virtual windows, but…

We landed at Changi Terminal 3 at 3.51 p.m, within six minutes of the scheduled arrival. One nice thing about having a connected aircraft is you can get your arrival gate information beforehand. We were parking on the A gate side, which was reason enough to pop by the First Class lounge (a perk for Solitaire PPS Club members) for a quick drink before heading to baggage claim!

Anyone who’s ever flown a legacy SilkAir aircraft will breathe a sigh of relief upon seeing how Singapore Airlines has transformed the cabins. More importantly, there’s now a more consistent experience across the fleet (well, rapidly-disappearing B737-800s aside); there was nothing quite so jarring as stepping off a long-haul Singapore Airlines flight with personal IFE and Wi-Fi and onto a short-haul SilkAir flight with no such frills.

While this Economy Class seat is perfectly fine for short-haul flights, I do wonder whether the decision not to install in-seat power was properly thought through. There’s USB charging for phones, yes, but laptops are still the bedrock of productivity. It probably won’t be an issue for a 50-minute hop to Kuala Lumpur, but what about Cairns, Darwin, Male, or Cochin, destinations above the 4-hour mark? Passengers who didn’t have the foresight to bring a fully-charged battery aren’t going to be happy.

Likewise, 30″ of seat pitch is definitely snug, though tolerable enough for a short flight like Da Nang. It’s a different matter altogether on a medium-haul red-eye flights, where the squeeze will really be felt.

What do you think of SIA’s new B737-8 Economy Class seat?

Cairns aside, most hp batt would last the journey and most people I know carry portable batt on board (& hopefully not complain it’s in the checked in luggage when hp dies!).

Economy menu options repeated too often. Some who fly often regionally in SQ econ with SQ might soon kpkb about this…. Hee hee