UOB pulls another fast one with the KrisFlyer UOB Credit Card by hiking the minimum SIA Group spend with no notice (they did pretend, though!)

If you’re a KrisFlyer UOB Credit Cardholder, you’re probably aware of the trigger condition UOB has set in order to unlock the card’s bonus earn rates. 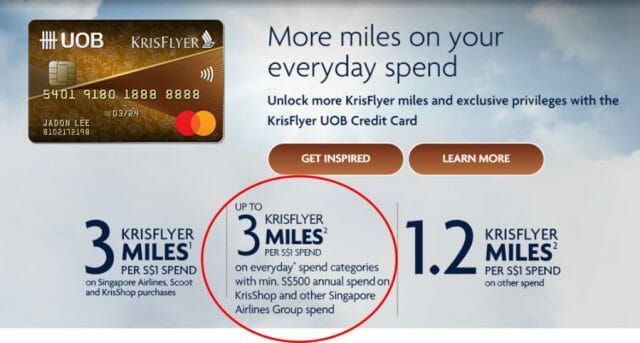 In short, cardholders need to meet a minimum spend on SIA Group transactions every membership year in order to earn 3 mpd on dining, food delivery, online shopping & travel and transport. Should this threshold not be met, they will earn only the regular rate of 1.2 mpd.

The minimum spend, originally set at S$500 per membership year, was temporarily lowered to S$300 during the pandemic- still a considerable barrier, considering you couldn’t set foot on a plane without quarantine.

But now that travel has returned, UOB says it’s time to pay the piper. To that end, it’s increasing the minimum SIA Group spend to S$800 per membership year, for cardholders with membership years ending from April 2023 onwards.

Here’s the details, and why I believe the move is unfair. 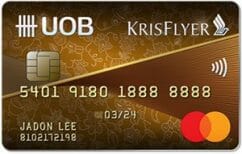 KrisFlyer UOB Credit Cardholders will have received the following SMS from UOB:

tl;dr: for your card membership year ending from April 2023 onwards, you’ll need to spend at least S$800 on SIA Group transactions to qualify for bonus miles.

This marks the third time the minimum spend has changed in the span of two years. For clarity, here’s a summary table.

While UOB is perfectly entitled to adjust its T&Cs as it sees fit, I find the execution to be unfair because for some cardholders, the change comes midway through their membership year.

Basically, anyone whose card membership year began from May to September 2022 has reason to feel aggrieved, because UOB has shifted the goalposts without prior notice.

Here’s a simple illustration: suppose my membership year started in June 2022 (and ends May 2023). At the point my membership year began, I would have gone in with the impression that S$500 was the target to meet, and made my decisions based on that figure. Maybe it influenced my decision to pay the annual fee. Maybe it influenced my decision to use the KrisFlyer UOB Credit Card for certain transactions instead of an alternative option.

Either way, the underlying basis no longer holds now that UOB says the magic number is S$800. S$300 is not a staggering increase in absolute terms, but the principle of the matter is that it’s fundamentally unfair to change the rules without prior notice.

What I find particularly disingenuous is that UOB is pretending to give a month’s notice. Think back to that SMS from earlier:

With effect from 1 November 2022, the minimum annual spend condition for Singapore Airlines Group Related Transactions charged to your KrisFlyer UOB Credit Card will be revised to S$800…

Since this SMS was sent on 1 October 2022, UOB is trying to give the impression that one month’s notice of changes has been provided.

….This revised condition will be applicable for Card Membership Year ending April 2023 onwards

But in reality, the 1 November 2022 date is meaningless since the revised terms are applicable for membership years ending April 2023 onwards.

If UOB really wanted to give one month’s notice, it would have sent out this SMS in April 2022, so that customers with membership years starting from May 2022 would have the complete facts upfront when deciding whether to renew their card or use it for their spending.

Given that UOB announced the change on 1 October 2022, it would be more fair to start the new policy for membership years ending from October 2023 onwards.

I mean, UOB certainly has no qualms about giving advance notice when it works in their favour. For their absurd miles extension perk, they sent out a notification in May 2021 about an SMS customers need to send between August 2023 to December 2024!

How do the KrisFlyer UOB Credit Card bonuses work?

For those who need a quick refresher, KrisFlyer UOB Credit Cardholders who spend on dining, food delivery, online shopping & travel and transport will earn 15 KrisFlyer miles per S$5 spent, split into:

In other words, you receive 1.2 mpd upfront, and 1.8 mpd two months after your membership year ends. UOB calls the 1.8 mpd portion “Accelerated Miles”, notwithstanding the fact you need to wait up to 14 months to receive your bonus!

This delayed crediting arrangement gives rise to four problems. I’ve expounded on them in this post, but to summarise:

UOB will argue that this is necessary because there’s no way of knowing, at the point of transaction, whether the cardholder will go on to hit the S$500 minimum spend required for the bonus. But there surely has to be a better way of doing this, because the current mechanism holds you hostage. Cancel your card early, and lose your bonus! 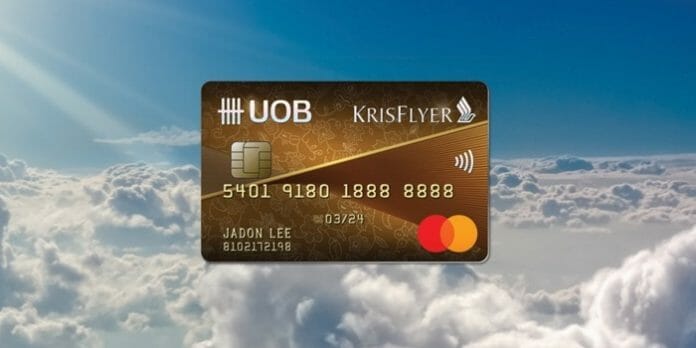 Even though this isn’t a big increase in absolute terms, any cardholder whose membership year ends from May to September 2022 has reason to be upset, since UOB is changing the rules midway.

Then again, this pattern of behaviour won’t be new to anyone who’s dealt with UOB cards before. They have good cards, that’s for sure, but you need to be constantly on your guard against T&Cs gotchas like this.

I have cancelled all my cards and accts with UOB a few years ago because of all these shenanigans. Ain’t surprised they are doing this. Oh well

What are alternative cards to UOB, especially for paywave and dining? (with exception of HSBC)

There’s still another amazeing card for as long as it lasts.

Totally in character. UOB is SG’s worst bank in every category. retail, privilege, private, markets, you name it

You can trust banks but never their bankers. Cannot decide which bank is worse. UOB or Citibank. Alright both are equally bad. OCBC sounds damm old fashion but they do seem decent.

OCBC one of the worse, hard to waive annual fees.

Sounds like all banks are the same. Lol 😂. Usually its the bankers, relationship managers etc that are beyond help and too greedy for their own good. Always pay for independent financial advice and never from bankers. Their priorities are never aligned with customers! They may offer a decent product but their fees will eat you up!

Agreed on the RMs part, but having worked with non RM staff across most UOB divisions, I just have to say that a commonality is they have no intention to be competitive in market, and love to taichi responsibility away from themselves. Its like their business model lives solely off consumers who dont know that every competing product from other banks are better

Only have UOB PPV. Hope they dun nerf that or I will cancel it

Aaron – Think perhaps a complaint to MAS is appropriate given your point on unfair and how they had change this with little notice?

Nope, it’s in the TnC that they can change the TnC at any time without notice. Little notice is already more than what they are obliged to do.

The MAS is a financial institution regulator. They have a lot on their plate, such as AML/CFT measures, solvency and capital adequacy ratios, but certainly not contractual terms you agreed to when deciding to become their customer. It is not the consumer-unfriendly-contract-term regulator. Please do not waste their time with this kind of irrelevant “complaint”. If you don’t like it, vote with your wallet and pull all your assets from UOB.

Quite happy that I really only use my UOB PPV as a last resort now that the HSBC Revo and Amaze pair well enough for most of my day to day spending.

The less you have to deal with this scummy bank the better.

Thanks for the heads up! Well.. there’s an ongoing Scoot sale – might be a good excuse for some to plan a cheeky getaway?

For the past 2 months, been trying to book the ticket via their UOB/Scoot special website, and scoot unable to recognise the card number….. after weeks, UOB CS called me and told me that scoot website is undergo maintenance (for 2 months?!?!?!) and advise me to submit a request via their support page, for every single booking, to redeem the card benefit….. wonderful perks!

No “for great justice” tag?

Is there any vouchers one can buy at krishop? I don’t see any.

only their own vouchers. kris shop vouchers. 90% of items are over priced and before GST, wonder how they going to survive