From now till 16 January 2023, GHA DISCOVERY is offering 2X Discovery Dollars (D$) for all stays at Anantara and Avani hotels worldwide.

While the footprint of these two chains is limited, it does present an excellent opportunity for status running and picking up the brands required to qualify or requalify for GHA Platinum or Titanium.

GHA DISCOVERY members who book stays at Anantara or Avani hotels between 12-16 January 2023 will enjoy 2X the usual D$.

A few points to note:

Here’s how many D$ you can expect to earn on your stay, depending on your DISCOVERY tier.

As a reminder, D$1 = US$1 at GHA properties worldwide. It’s currently only possible to use D$ during a stay, at the front desk of a hotel. You cannot redeem D$ online, nor can you spend them on F&B or spa treatments when not an in-house guest (GHA is planning to add the ability to redeem D$ outside a stay, but there’s no word on when that will happen).

If you want to use D$ to pay for a prepaid rate, I suggest emailing the hotel beforehand to clarify how it’ll work. Anecdotally, I’ve booked “prepaid” rates at the Sindhorn Kempinski and other GHA hotels that weren’t charged until check-in.

For avoidance of doubt, this offer can be stacked with other ongoing GHA offers.

Here are links to the T&Cs for Anantara and Avani. The offer is not targeted, and is available to all GHA members.

How to maximise this promotion

Anantara and Avani have relatively small global footprints, but could still present an opportunity to requalify for GHA status on the cheap.

As a reminder, you only need to stay at 2 and 3 different GHA brands to qualify for Platinum and Titanium status respectively. There is no minimum length of stay, so finding a cheap rate at an Anantara and Avani hotel would put you two thirds of the way to qualifying for Titanium. 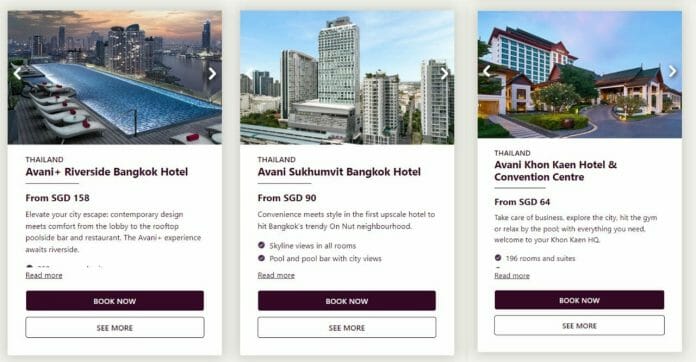 Anantara is positioned slightly higher than Avani, but I can still find the Anantara Hua Hin from S$100++.

Throw in double D$ rebates, and it could be a pretty sweet deal if you happen to be in the neighbourhood.

Given the relatively low rates of both hotels, this could be an excellent chance to status run two of the three brands you need to qualify or requalify for GHA Titanium. You could even book speculative refundable stays first, since there’s no restriction on the type of stay that qualifies.