Following my extremely pleasant stopover at Istanbul, the moment of truth had finally arrived.

I had booked my air tickets because I’d felt the promotional rates were simply too good to pass – somewhere along the way, though, I was alerted to the fact that the short-haul leg of my journey was likely to be in seats like these: 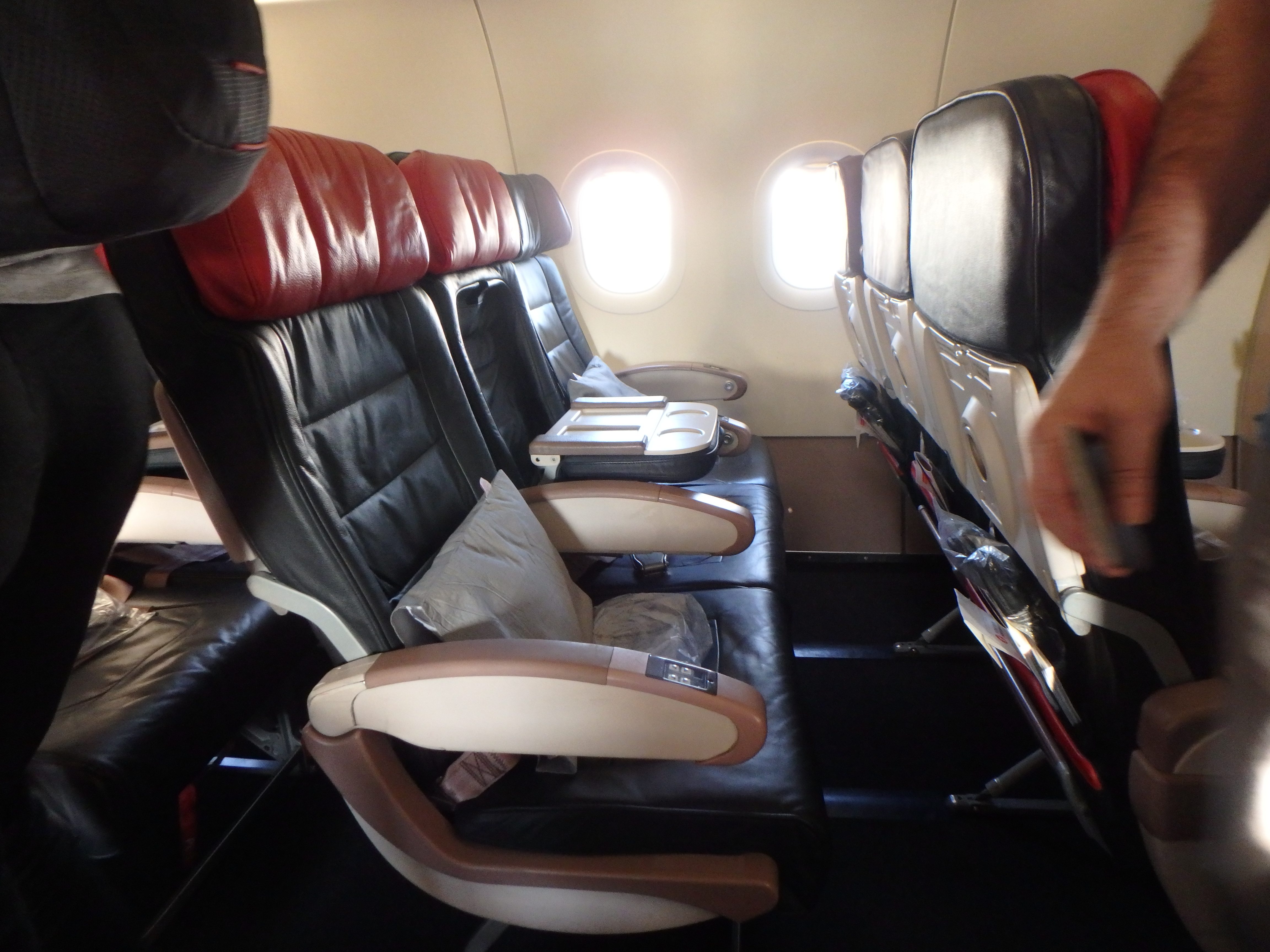 They look nice enough, but they’re essentially reupholstered economy class seats with the middle seat blocked out as cup holders.

At the same time, I’d heard that the newer A321s (that I was flying) were supposed to look more like this…

…so I was immensely relieved to see that this was indeed the case upon boarding the plane. Phew!

The seat was comfortable enough – though nowhere as roomy as my previous long-haul leg of the journey, there was more than enough legroom to play with.

The new(-ish) safety video that OMAAT had blogged about was playing. I think it’s cute, but since most of the ‘magic’ was done with the use of camera tricks, I didn’t really find it all that impressive (or entertaining).

I was also relieved to find a personal screen folded away in the seat’s armrest. Though way smaller than its long-haul equivalent, I actually quite liked having the screen within touching reach – the interface is clearly optimised for touch controls, and it was somewhat cumbersome using the remote to control the larger screen (which was also positioned further away from the passenger).

Seat controls were not motorised – it’s the old type of controls where you hold the button and adjust the seat position by leaning/pushing as appropriate.

Which isn’t ideal, but I guess it still works.

There was no option to indicate your orders on this breakfast menu – I suppose on a short-haul flight, they don’t expect you to need to place your orders before going to sleep for hours.

The ‘flying chef‘ was (from my perspective) just helping the flight crew deliver food to the passengers – I’m quite curious about what exactly they do onboard other than this… I’m sure they’re supposed to be involved in food preparation, but what exactly can you do when you’re up on an aircraft?

I realise now that this is was my first encounter with “gözleme”, so it was here that my adventurous spirit prompted me to try the Turkish breakfast option that I ended up not liking. Why, then, had I not learnt my lesson on my flight back from IST to KUL? If I remember correctly, they had actually run out of eggs by the time they’d reached me, which was rather disappointing. Not something I’d expect to happen on business class!

I wasn’t a fan of the fish on my previous flight, so I decided to get the beef instead.

Sautéed fillet of beef – pretty decent, though not exactly something I’d rave about

I guess my expectations had been set pretty low, but for a short-haul flight I found it more than adequate – rather pleasant, actually! If you’re able to confirm that your aircraft is not in the old configuration, I’d say that the short-haul flights with these newer seats will not negatively impact your business class flying experience.

Louis Tan
Louis believes he caught the premium travel bug after attaining KrisFlyer Elite Gold and occasionally being upgraded while shuttling between the UK, Singapore and Japan (in economy class). These travels have led to a wonderful marriage, as well as a burning desire to avoid flying long-haul economy. He previously travelled with a gryphon plush toy, Griffles, which often stood in for him in vacation photos. Griffles is mostly busy with entertaining a toddler these days, but still manages to continues amusing (and confusing) air stewardesses, hotel staff (and just about everybody else) all around the world.
Previous articleReview: Turkish Airlines A330 Business Class KUL-IST / IST-KUL Review
Next articleAct quickly: Hilton status matches available