ANZ points to be converted to DBS points

It was announced in October 2016 that ANZ would be ceasing its consumer banking operations in Singapore and transferring its assets to DBS.

At the time, I mentioned that you might consider cashing out your ANZ Travel $, given that we didn’t know what would happen with the bank’s credit card program post the merger. I myself cashed out 10K of my ~13K ANZ Travel $, assuming that ANZ would eventually ask all cardmembers to convert their points by a certain date or lose them. I took the remainder 3K as a write off.

Well, perhaps I didn’t have to do anything, because the following notice has popped up on ANZ’s website. 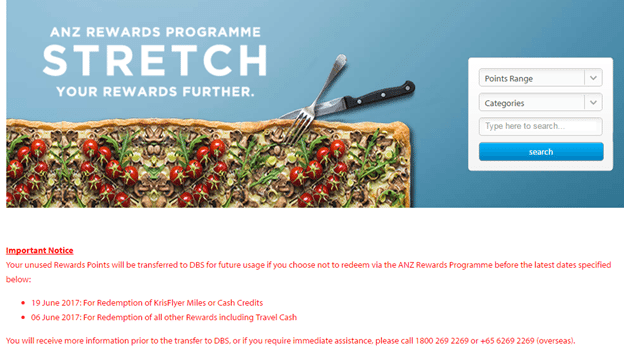 Important Notice
Your unused Rewards Points will be transferred to DBS for future usage if you choose not to redeem via the ANZ Rewards Programme before the latest dates specified below:

No further information is given about the mechanics of the transfer (what does it mean for customers who don’t have DBS cards?) or the ratio (1 DBS point to 2 Travel $ would be the “fair” amount).

The lack of a ratio does worry me slightly, Because think about it from a business point of view- Travel $ are a liability on the balance sheet of ANZ. ANZ got the benefit of merchant fees etc when customers used their ANZ cards to pay for things. ANZ then incurred a liability in the form of the Travel $, which represent a commitment to deliver miles to the customer at some future point in time (and to incur an expense buying the miles from SQ/CX).

DBS is now taking over ANZ, and assuming those liabilities on their balance sheet by converting Travel $ to DBS points. But DBS didn’t get the benefit of those ANZ customers spending money on their cards (well, ok in some abstract way they did, because when they paid for ANZ I imagine that got priced in). So will they be willing to assume the liability at the full rate? Or will this be an opportunity for a devaluation in the transfer process?

For the record, I don’t think DBS will pull a dick move or anything (because that would be a super dick move), but I’d rather they come out and clarify this sooner rather than later. Whatever the case, I certainly hope they announce more details before 19 June, because this will let people decide whether they want to cash out their Travel$ or let them be converted to DBS points.

Aaron Wong
Aaron founded The Milelion to help people travel better for less and impress chiobu. He was 50% successful.
Previous articleBreaking down the Grab Rewards program
Next articleLifemiles sale is back with 125% bonus

In DBS we trust, our faith shall last. Hahahahah. Looking forward to how this plays out too. Maybe they will offer a new card to map the ANZ Optimum benefits to?

It’s a relief that it will be redeemed for something at least, right.

My guess is a one to one …Meaning 1 travel dollar becomes 2 dbs points to be equitable.

It’s just not worth the ill will since dbs has been spending tons on their marketing lately.

My guess is a one to one …Meaning 1 travel dollar becomes 0.5 dbs points to be equitable….
Edit

Fully agree with you on the devaluation fears. I’ve a reminder set for 18th June for pulling the trigger. You’re right, a decision to devalue Travel$ would be a dick move. Unfortunately, M&A deals tend to get inked under a fair share of assumptions on how healthy the books of an entity getting acquired could be. After all, ANZ would make a strong case to potential suitors to get the best possible valuation. If DBS ends up with a deal that turns out less rosy than what it had envisioned, devaluation would be a good way to improve the economics… Read more »

Like you said, accrued miles/travel $/whatever they called it, is a liability on their books, owing to card holders. Any M&A cannot absolve this liability by whole or part as a consequence. Otherwise they can be sued, like class action in US. Lol.

Any bank at any time can change their terms and conditions. You agreed to it the minute you signed the card application. You cannot file a lawsuit, leave alone a class action.

I called the ANZ hotline and was told that cardholders will be given “similar” cards in exchange for their ANZ ones. One presumes that ANZ Travel will map into DBS Altitude. For those without the DBS Altitude, instead of the free exchange, they may wish to consider applying for the card instead as there is a sign-up bonus promo that gives up to 10,000 miles – ends 30 June. Also, the CSO said that points conversion to DBS will be of equivalent value. So, one Travel$ should give 0.5 DBS points. They won’t give half-a-point, so it will be interesting… Read more »

Round up/round down = 1 mile, nothing to fuss over. I was sincerely hoping that they would continue the ANZ credit cards as some sort of bastard child product line – I really liked the 1.4mpd without the hassles of UOB’s $5 rounding, half point rounding and lengthy exclusion list that includes some of the country’s largest retailers (sorry, sounding like a broken record again – I have avoided getting and recommending the PRVI cards out of principle). The biggest sticking point was having to pay another $25 conversion fee, but given they are converting to DBS points I will… Read more »

thanks for the update! good to hear about the equivalent value thing.

I also called ANZ hotline on Tuesday evening and was informed by the CSO that the conversion of ANZ Travel$ will be of equivalent value, meaning 1 Travel$ = 0.5 DBS point which equates to 1 mile.

Does this apply to the optimum points on the optimum card as well? ANZ has been running some promotions recently, like $10 cashback on $200 spending for first 2000 customers. Will this be provided by DBS?

no one knows about optimum- i think cashback is harder to transfer than points. i wouldn’t hold my breath.

Yes the Optimum $ is a big question mark. I have about 3000 Optimum dollars ^^ but what about those odd amounts like 12 or 30 ( as we can only redeeem in blocks of $50)….how would these be valued in DBS rewards program ?

Also there is NO card similar to Optimum with unlimited cash rebate at 5% spend on preferred category in singapore. Not sure what card can they use to match ?

Just got verbal confirmation by speaking to an ANZ agent. The transfer will happen in June as expected, and the rates are as follows:

This also suggests that the optimum card will be mapped into the POSB everyday card.

I suggest we wait for the transfer to DBS before doing anything. It is too risky to convert points to cash or miles now. If anything happens (rather, nothing happens – no letter, not update on KF side, etc) during the cutover, the issue falls into a black hole and nobody will help to resolve. At least after the transfer, DBS will have to take ownership.

For those of you calling the CSOs, did the CSO say what would happen to the ANZ Travel Card? Would it “die” and get converted (for non-existing card holders)/subsumed(for existing cardholders) into the DBS Altitude?

I am very skeptical and worried about ANZ. I have been trying to convert travel$ to miles for at least 6 months and they keep writing a unsuccessful letter stating reason “Number Mismatch” with no whatsoever solution to rectify this – obviously they are just trying to drag as much time until this falls under DBS’ corut or hope customers will give up.