A review of the Conrad Centennial hotel- how do the rooms, service and food stack up?

(To provide additional information to go along with the ongoing third night free promo, I thought I’d share this review of a previous stay from Oct 2016 – nothing much has changed in the past few years, so until they’re done with their rejuvenation works around Jan 2018 or so, this is probably still reflective of the property!)

The Conrad Centennial Singapore has been one of my favourite staycation options for a few years now, and has always provided a consistent experience. That consistency may not necessarily have been a good thing, though, as it seems to have fallen behind its competition in recent years. For reference,  previously the lowest price I’ve managed to get for the basic room is about S$300 with taxes.

With the ongoing third night free promo, you’ll probably be able to top that easily. The rate for 31 Aug – 3 Sep (beginning weekend of the Sep break) currently works out to around S$700, if I’ve done my maths right. That’s S$230 per night, which is a pretty good deal! 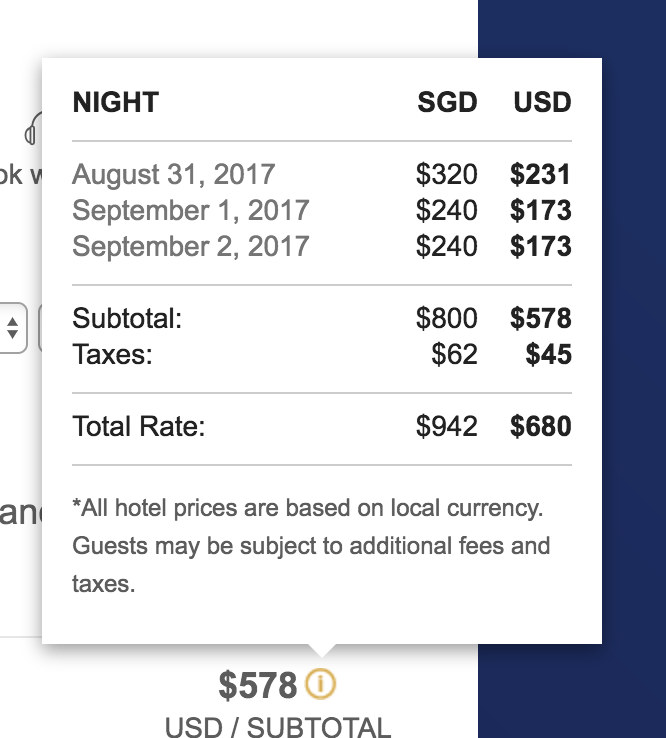 When you get into the Conrad, you are greeted by this odd red sculpture. I’m not sure exactly what it is, but it looks pretty imposing.

As a Gold member you usually just get a one-class upgrade – if you want access to the executive lounge, it’s better to book a business room (one class below executive room) to (almost) guarantee it. I’ve never been upgraded to a suite from a basic room, though perhaps it’s possible if you’re more insistent.

As a Diamond member (or if you’re in an executive room) there’s the option to check in at the lounge, which is a nice option if the lines are long. Just ask one of their staff standing in front of the check in desks. There wasn’t much of a queue when we got there, so we opted to just proceed with standard check in even though we’d been upgraded to an executive room.

The bed is comfortable (firm, but not too hard). Somewhat on the high side, but once you’re up there it’s easy to stay there. Such is the nature of comfortable beds.

In the other corners of the room there’s the very typical armchair / work desk setup. Kinda old school, and not exactly that comfortable.

There’s also a large flatscreen TV. I don’t like that it’s recessed into built-in shelving like this – there’s no easy access to the ports and you’ll have to call for an engineer to come in to help if you want to plug in your own HDMI cables. It’s possible, but troublesome.

To be fair, they actually support connectivity via a panel below the TV, but you can tell that it was set up quite some time ago as they only have older RGB, S-Video and VGA ports (i.e. no HD capability). Beside the panel is what used to be the room’s sole accessible power socket – they’ve more recently added a second one in a bedstand drawer (this one comes with a USB port as well), but overall connectivity for electronics is definitely rather weak.

The Conrad used to give out these plush bears, pictured below in a tree they had set up around Christmas 2015 as part of a fund-raising campaign…

In early 2016 they’d decided to switch to a new design, with a slimmer bear that comes in oriental and batik colouring.

On this particular stay, I got a batik bear. Also, a complimentary hazelnut crunch cake to celebrate my birthday.

Other than the cake, the room came with the standard fruit platter and a box of four chocolates.

The bathroom is nice enough, with lots of marble tiling – it’s also starting to show its age, though. One thing to take note of is that the basic room does not come with a bathtub, so do take note of that when booking your rooms! They also provide a complimentary Conrad rubber duck, which is a nice touch.

The view from the room was really quite lovely, offering direct line of sight to the nearby Fountain of Wealth, as well as the renovated National Stadium.

Interestingly enough, executive floor benefits include complimentary pressing of up to three items. I keep forgetting to do so, but if you really wanted to maximise your freebies you can bring along some articles of clothing to be ironed. #maximumcheapo

The executive lounge is on the 31st floor and gets pretty crowded, especially when the complimentary F&B is being served.

The drinks selection is decent enough, with red, white and sparkling (also, some hard liquor not pictured to the right).

The food selection is not really all that extensive. Cheese, salads, pasta in the middle, with about three hot items at the side. You could replace dinner with it, but it’s probably not all that satisfying.

It also offers pretty good views in multiple directions. On one side you have the floating platform (pretty good for viewing fireworks, though it is an obstructed view)…

…and on the other side, you get to see the same Fountain of Wealth that was visible from my room, albeit from a higher vantage point.

As a Gold member you get complimentary breakfast at the restaurant, though if you have lounge access you get to choose between the lounge and the restaurant. I usually opt for the latter due the wider range of food available.

I’ve been staying at the Conrad Centennial Singapore for a number of years now, so I have a special fondness for it, but for its price point I find the dated furnishings and inadequate electronics support to be very disappointing. Additionally, upgrades are hard to come by here – even as a Diamond member with multiple stays under the belt, I’ve never managed to secure a suite upgrade from a basic room. Breakfast is a highlight, though!

A few years back, I’d thought that the property was very nice, but right now it’s just kinda nice, and not particularly good value for money, so I find it hard to recommend to people at the moment (unless you manage to get it while on sale). Based on the previews of what’s to come, (good) changes are a-coming – perhaps I’ll be back again come 2018!

Louis Tan
Louis believes he caught the premium travel bug after attaining KrisFlyer Elite Gold and occasionally being upgraded while shuttling between the UK, Singapore and Japan (in economy class). These travels have led to a wonderful marriage, as well as a burning desire to avoid flying long-haul economy. He previously travelled with a gryphon plush toy, Griffles, which often stood in for him in vacation photos. Griffles is mostly busy with entertaining a toddler these days, but still manages to continues amusing (and confusing) air stewardesses, hotel staff (and just about everybody else) all around the world.
Previous article
Review: Sheraton Grand Park Lane London
Next article
Review: Westin Vendome Paris

This is probably the worst Conrad in the chain in terms of both hardware and software. The rooms are old and smell musty, the pool feels like a makeshift solution crammed in between ventilation shafts and whatnot, and the breakfast is always incredibly busy with sometimes long waits to even get a table. The spread in the lounge is a joke compared to most other Conrad properties. Service is professional but with the typical ‘by the book’ and lack of flexibility that you get in Singapore. If staff are required to move outside of the ‘manual’ there will be a… Read more »

why, is his mother in law watching channel 8 dramas all day? buy another tv for $400 and go out for dinner with $200, still got $120 change for other activities…rather than a getway at suntec city wooopieeeee

i know a lot of people who will pay more than $720 to have time away from their mother in law.

I too wonder about the utility of a staycation. For 720 bucks I could fly to Bangkokand stay at the Peninsula for two nights. And still have change for mango sticky rice.

You know what – you guys are right. I was considering per-night value, but a 3-night stay probably won’t make any sense for locals. Possibly useful for visiting friends/family, or if desperate to complete a mattress run with limited time for travelling?

Even in the latter case, I’d probably try to hop over to DoubleTree JB instead, though…

dont worry bro, everyone waste money ever so often. i’m sure you’re a rich banker or something. 720 is a lot of money to sleep at suntec though. you probably live less than 10 mins from the hotel though.