The Sheraton Park Lane has received a major facelift as part of Sheraton's global rebrand. How does it measure up?

I last visited the Sheraton Park Lane in 2015 when it was still in the midst of its multi-million dollar renovation. The hotel originally opened in 1927 and until its renovation, looked like it had been opened in 1927. With its relaunch, the Sheraton Park Lane has been elevated to the somewhat more prestigious Sheraton Grand tier, which is meant to make people say, “yeah, it’s a Sheraton, but it’s not a Sheraton, if you know what I mean?” 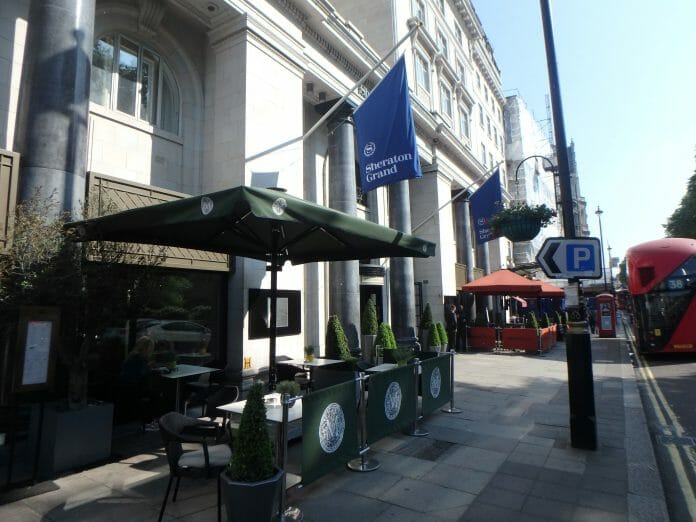 The Park Lane is located near the Green Park tube station. It’s a close enough walk to some major tourist attractions, including the Royal Mews and the Queen’s Gallery.

You can see evidence of the changes done once you step into the lobby- gone are the depressing Sheraton floors and decor, and instead you have a more stylish design that is clearly trying to evoke comparisons with a boutique hotel. 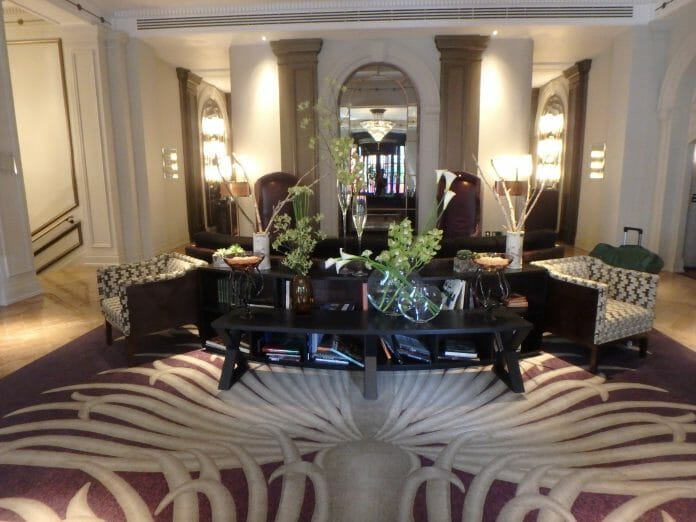 To get to the check-in area from the main entrance you need to cut through the lobby bar. Again, you can see the Great-Gatsby esque theme they were trying to go for here. Kind of like a shout out to the hotel’s 1920s roots. 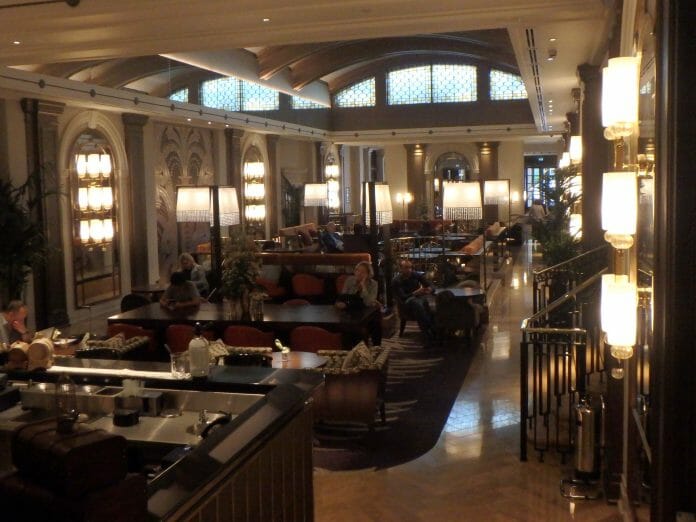 The hotel check in area has also received a makeover, with fresh carpet and decorative bookshelves. 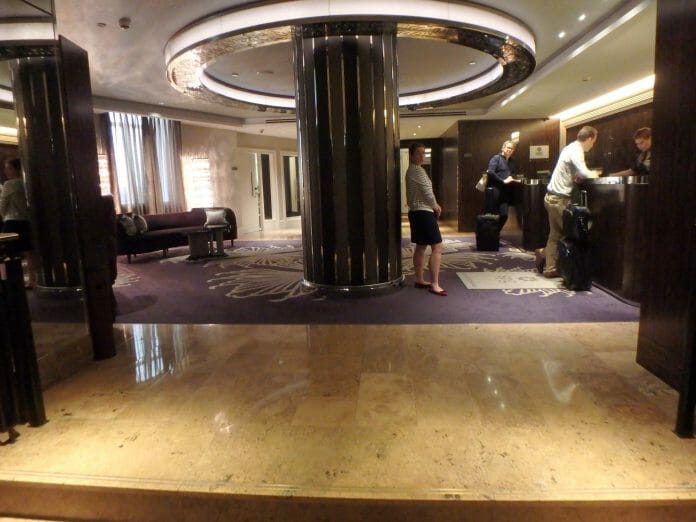 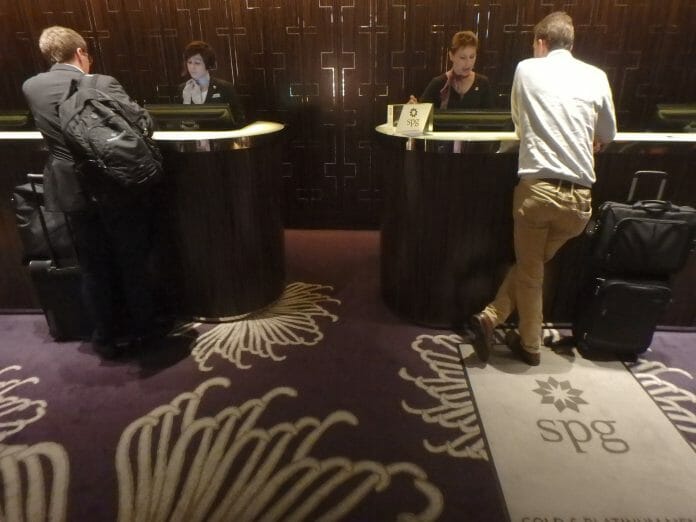 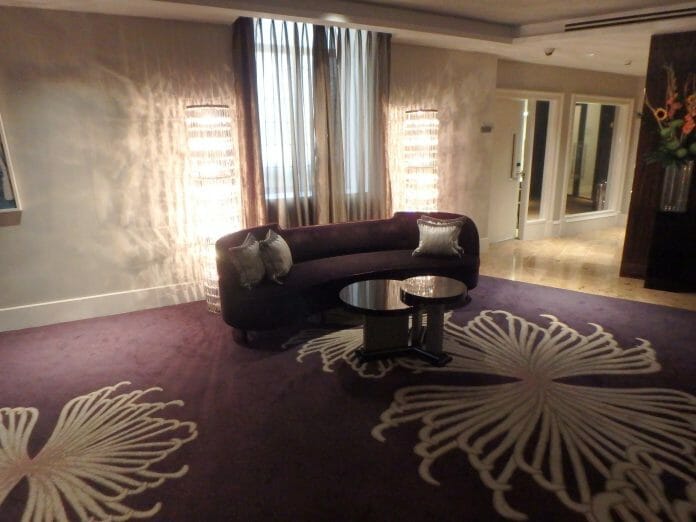 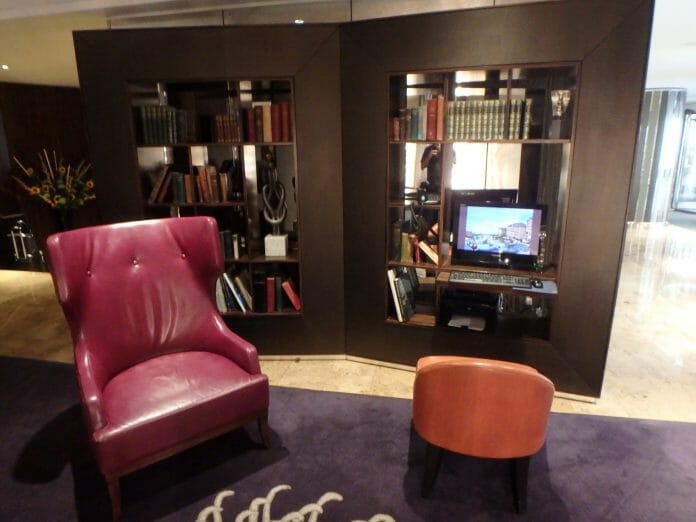 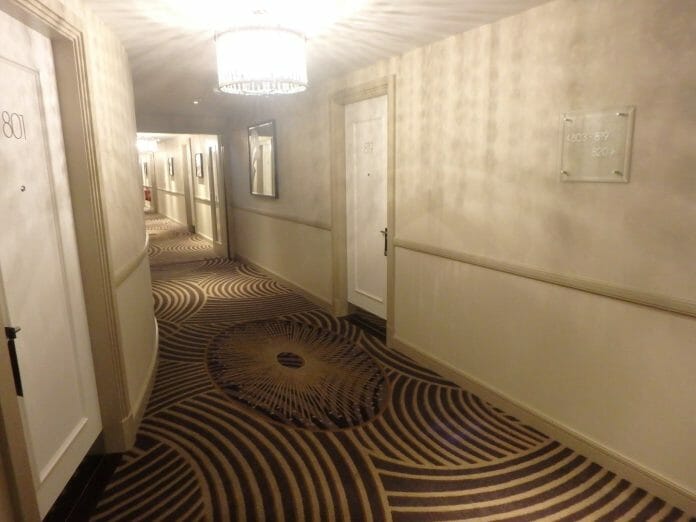 As a platinum, I got upgraded to an Art Deco suite, which as far as I can tell is a slightly larger room with more hipster furnishing 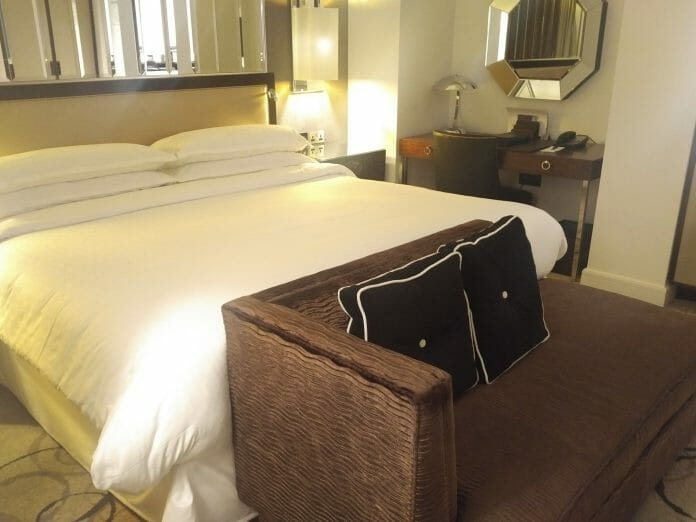 There was a digital alarm clock with two USB charging ports on the bedside.

And I’m glad to see these phones are appearing in more and more hotels. It makes sense for both sides- advertisers can hawk their wares to guests, and guests get free internet plus recommendations for restaurants and the like.

The work desk was large

There’s a Nespresso machine in the room as well, together with some complimentary water.

The bathroom had two sinks and plenty of counter space.

The shower and tub were in a separate room within the bathroom itself.

If Sheraton really wants to give its brand a boost they need to look into better quality toiletries. I’m sure many entry-level luxury brands would jump at the chance to partner with a chain that has the reach of Sheraton.

Breakfast is served in the club lounge and is complimentary for platinum members. I waltzed past the unattended desk.. 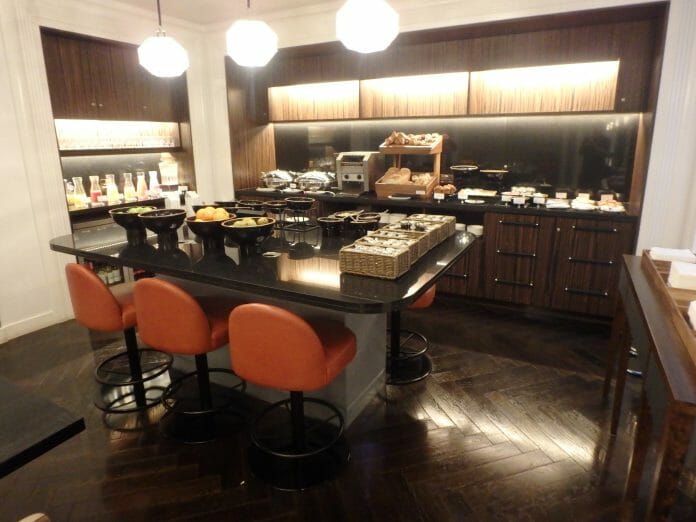 Breakfast definitely leans towards the continental side of things 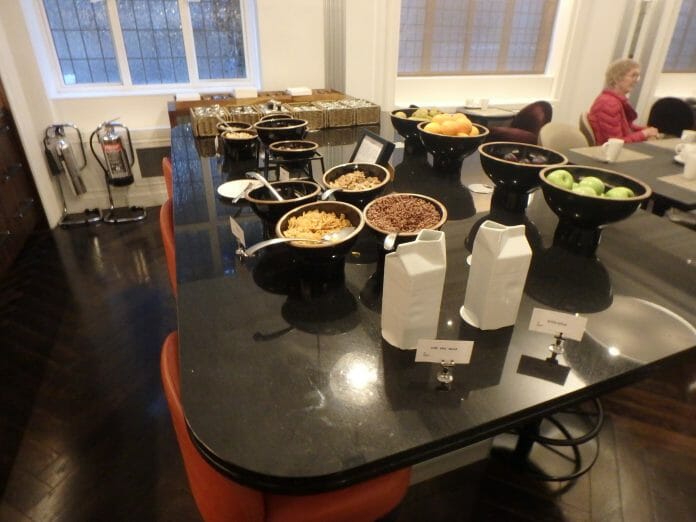 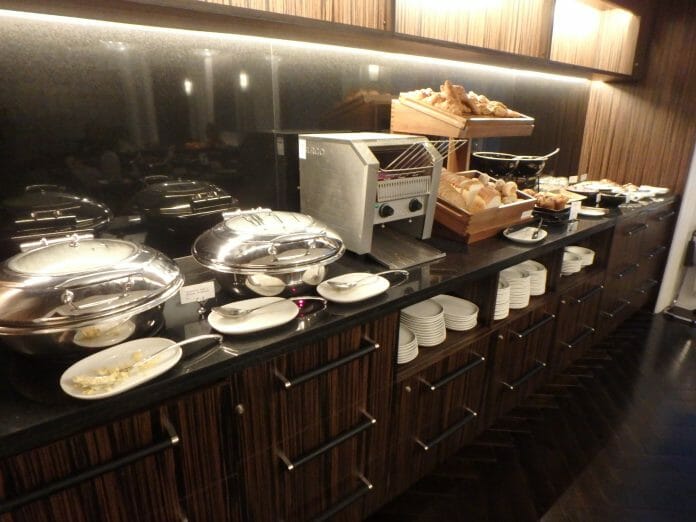 But there are still 3 hot items every day that rotate on a daily basis. 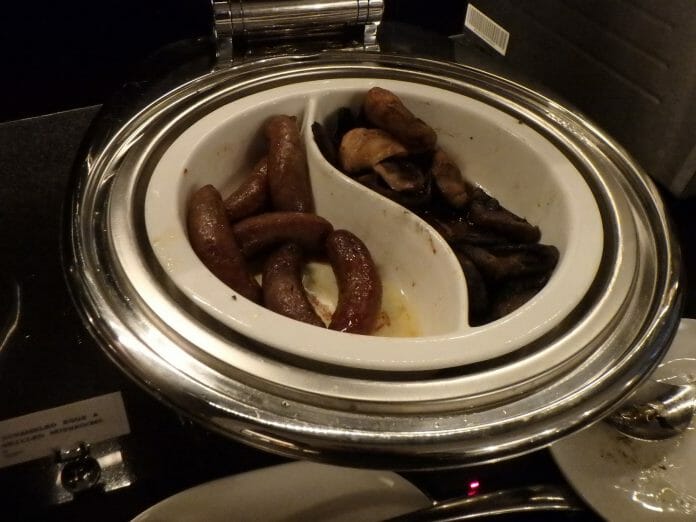 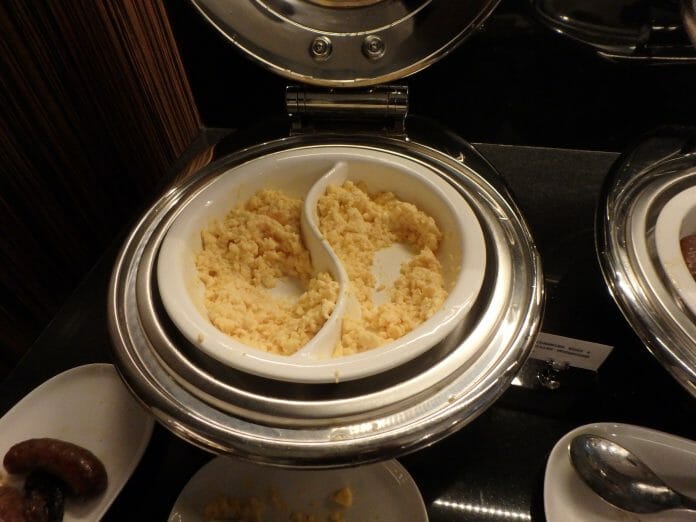 Where food quality is concerned, the breakfast isn’t anything to shout about. On the first day it was scrambled eggs, mushrooms and bangers. 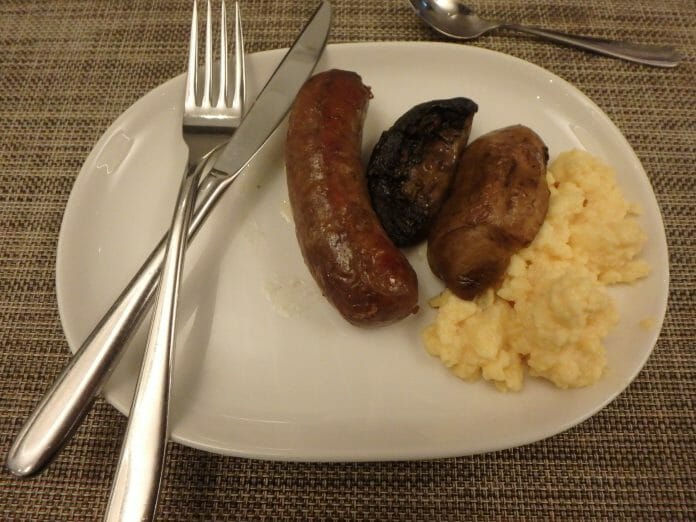 On the second they replaced scrambled eggs with fried ones and the mushrooms with waffles.

There’s plenty of seating in the lounge and I never saw it completely filled. I didn’t see the happy hour offerings either, for that matter, as I was frequently out of the hotel. Come on, it’s London. 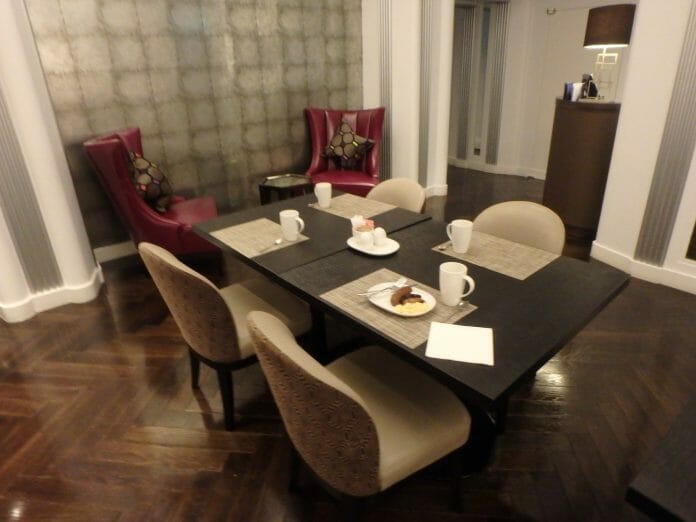 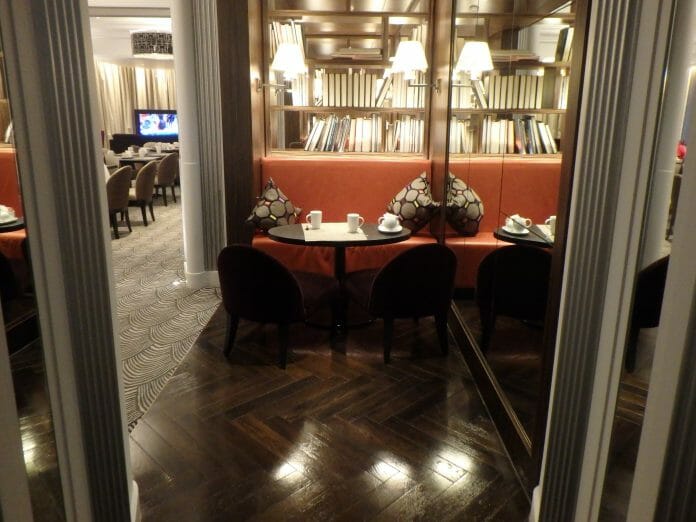 And for settling business, there are two computer terminals plus a printer 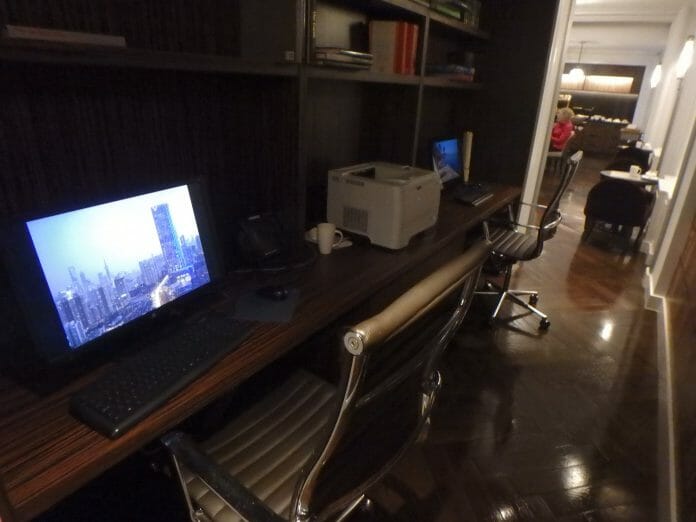 The internet in the hotel clonked out completely for half a day during the time I was there. This is the same thing that happened last time round, and the staff at the front desk were powerless to do anything other than ask for patience as the provider tried to fix it.

And that’s the thing about Sheratons. On the whole, the hotel was fine, it really was. But somehow I just felt it couldn’t shake off the Sheraton tag, no matter how hard it tried. Maybe it was the cheap toiletries, or the remnants of the marble floors in the lobby. Maybe it was the all-too-familiar Sheraton design on the keycards, or the fact that things break down once every so often. Marriott has realised that the Sheraton brand has major consumer perception problems, as there’s a handful of really bad properties that have created a stank around the entire brand. The Park Lane Sheraton is clearly one of the better Sheratons out there, but you can still sense shadows of the overall Sheraton brand lurking in the background.

That said, the Park Lane Sheraton was still light years ahead of the Westin Paris, where I was headed to next…