Well well well. I wrote an article a while back when the DBS Altitude cut its income requirement to $30K about how it was nice to see that good miles earning cards were gradually coming within reach of more people.

Another great general spending card has just dropped its income requirement-  the UOB PRVI Miles has cut its annual income threshold from $80K to $50K on both the AMEX and Mastercard versions. 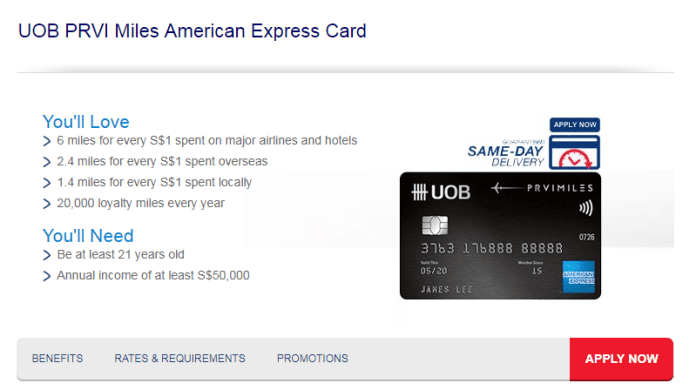 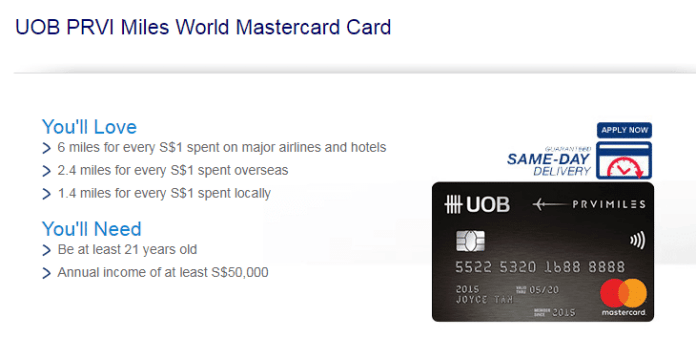 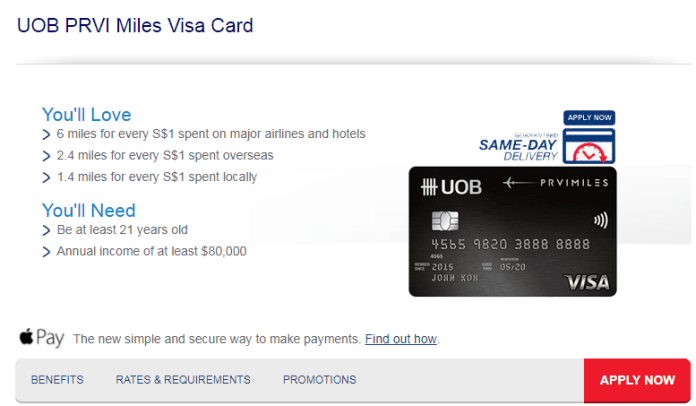 Based on stories I’d been hearing recently, UOB had already been loosening the qualification criteria for the PRVI. Still, it’s good to see that this is now an official policy and hopefully those who were left out in the cold before can now get one of the better general spending cards on the market.

There’s a generally predictable trend that happens with all newly-launched premium cards. They’ll start with a high income requirement to create a sense of exclusivity, but as time goes by those requirements drop. For example, the DBS Altitude was originally an $80K card when it came out, before dropping to $50K and eventually its current $30K threshold now.

If you’ve traditionally ignored this card because it was out of your reach, here’s a quick refresher of some of its key features

1.4 mpd is the best general spending rate you can get for local currency spend*, what with the ANZ Travel card’s imminent demise. Most other miles earning cards will earn in the 1.2-1.3 mpd range.

Because of the way UOB calculates points, you need to spend a minimum of $5 to earn any points. I’ve detailed this more in an article about the rounding policies of different banks.

The 2.4 mpd overseas earn rate is also the strongest in the market (unless you can get your hands on a UOB Visa Signature which offers 4 mpd for spending up to $2K each statement period with a minimum $1K spend) for a general spending card. The benchmark for other cards is around 2.0 mpd.

However, be aware that the PRVI charges higher foreign currency transaction fees than other cards which might explain the more generous overseas earning rate

UOB PRVI advertises 6 mpd when booking major airlines and hotels through Expedia, Agoda or UOB Travel. Unfortunately, there’s a glaring omission in the form of Singapore Airlines (it’s strange that SilkAir would qualify for 6 mpd and SQ doesn’t) 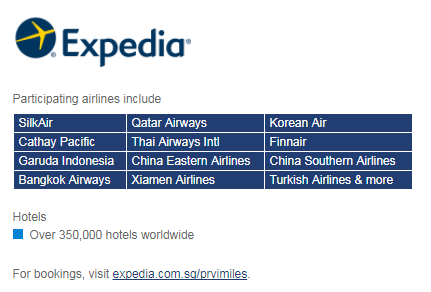 Kaligo is a milesback OTA site that offers you bonus airline miles when you book hotel stays with them. Their rates can sometimes be more than other OTAs so I’d advise you to shop around and see whether you’re paying a premium to book via Kaligo, and if so whether the 10 mpd makes it worth it.

UOB is running a sign up bonus on its PRVI Miles card from now till 30 Sept 2017.

I’m not a big fan of the way UOB does its sign up bonuses, because you need to register via SMS and only the first 1,200 people to hit the spending threshold will qualify. UOB splits the promotion into 2 periods

There’s no way of knowing ex-ante whether the promotion has been exhausted, so if you want to be absolutely sure I’d try and time my card approval date as close to after the 16th of August as possible (careful not to pull the trigger too early and fall into the previous period…) and spend the $4,000 asap.

But it’s really frustrating not knowing beforehand whether or not the promotion still exists, and this is a major gripe I have with UOB’s sign up bonuses. Put it another way, I wouldn’t sign up for the card expecting to get the bonus. If I do, it’s a, er, bonus.

An interesting dynamic exists between the DBS Altitude and the UOB PRVI. The Altitude has better sign up bonuses (and ongoing promotions) but the PRVI has a better day to day miles earning rate. I own both cards and manage my spending between the two.

I’m of the opinion that credit card income requirements beyond $30K (MAS mandated minimum) are completely arbitrary and more often than not are to create a false sense of exclusivity. Let’s hope we see more income requirement reductions in the near future so more people can access great miles cards.

Aaron Wong
Aaron founded The Milelion to help people travel better for less and impress chiobu. He was 50% successful.
Previous articleUOB PRVI Pay offers opportunity to buy unlimited miles at 2 cents each
Next articleMaking sense of all the financial comparison sites in Singapore

I detest UOB for lumping together all the UNI$ from the various credit cards (I have the Signature and the PRIVI) in the monthly statements. no mention of which card earns which points, what a crap. Citibank is the best in this sense as it breaks down the rewards points per transactions in terms of basic and bonus points. Sorry I digress here.

but yes, the UOB PRIVI is the best local miles earner for a new credit card applicant, though some are still trying to search/chase the unicorn.

I gotta agree with Aaron on this part. And the 10k miles to transfer can be a bit prohibitive

Iirc provided your monthly spending is more than 2.5K. And capped at 5k for the bonus.

Do miles expire with UOB PRVI?

Aaron – not sure how much truth is in this but running the PRVI Miles Visa BIN through a bunch of online databases seems to suggest that it’s an Infinite :O

Even though the bank doesn’t market it as such (unlike the MC version which is clearly marketed as a WMC), perhaps that’s the reason why the income req hasn’t come down yet. (and also how they’re able to make enough money to sustain 1.4mpd)

interesting. this is the first i’m hearing of something like this. but don’t all VI’s have a min income requirement of 120k? and why wouldn’t the card have infinite branding, or why wouldn’t they be pushing those perks if it were the case? that doesn’t add up to me.

I registered for Visa Infinite Concierge under with the card as well as the Hilton Fast Track to Gold with 2 stays/ 4 Nights.

A bit of a shocker for me as well.
Cheers.

Same here. That’s what I thought too (though i’m nowhere near the level of income needed to qualify for a VI) but it seems like times have changed? Come to think of it now the 120k level was probably born out of convenience, as that’s the level where (in theory) banks are no longer bound by the 4x income cap when granting credit. In other words, they can throw more money at you to spend… I suppose one reason why its a ‘closeted’ VI is ‘cos UOB wants to earn the interchange premium but doesn’t want to alienate its regular… Read more »

Maybe they didnt actually brand it as a Visa Infinite was to cut down on payment to Visa?

Only the peeps at UOB would know the real reason I guess.

But to all, yes it is a Visa Infinite card and it will get you into the Visa Infinite Concierge program (if you can call it that)

I beg to differ actually. UOB gets more money coding cards as VI as opposed to say Signature (see here) so it would be in their best interests to do so (which is why I alluded to the fact that it must be the reason why they can sustain 1.4mpd). In Visa’s eyes, the card should appear as a VI – [and as your experiences suggest, UOB is willing to pay for VI-level perks on the card(?) to earn that extra interchange] Which is why i’m leaning towards the exclusivity argument and how UOB doesn’t want to run the risk… Read more »

But as a end user of the card, I just know i’m getting the benefits of VI 😉

VI has substantive benefits? Which ones stand out for you?

i’m still having a mini mindblow that this could be true. doing some research on it now but if i’m able to confirm this i’ll get something up on the site. fwiw, VI has been “devalued” already since it was first introduced back in 2003 (UOB made a big fuss about being the first issuer in singapore or asia pac or something). you can now get one with CIMB so long as you’re willing to plop a fixed dep with them

It is VI. It shares the same BIN numbers as the UOB VI card, therefore should be processed as a VI card.

I think the reason UOB don’t advertise it as a VI card is that they do not enforce the VI requirements for cardholders or something. To me it’s a very sneaky way to gouge more from merchants. But sneaky and UOB have always gone hand in hand.

Does prvimiles offer 10k miles for renewal? I might have missed it but I haven’t seen it mentioned.

The SCB Visa Infinite card gives 3 miles per dollar of overseas spend, if you spend at least $2k that month.

Take note that the bonus you can receive, if any, will also only be given until much later (a couple of months, unbelievable!). Not only are they very opaque about it, they are also quite… I’d say, less generous with their sign-up “reward”. Are they even really trying?

nah. I’ve found that DBS/Citibank have much better sign up bonuses than UOB. Although UOB, on a mpd for mpd basis, is still slightly better.