Little by little we’ve been getting more information on SQ’s new A380 suites product. In this article by AusBT, we learned that Sydney would be the first destination to get the new A380 products. We also learned that SQ was aiming to launch the new products on the 10th anniversary of their first A380 flight.

We also know that the Suites are likely to be on the upper deck, thanks to some eagle-eyed sleuthing (see the spacing of the windows of the upper deck on the RHS photo, which is one of the new A380s undergoing testing) by airplane boffins.

It looks like this is now confirmed, as the new A380 seatmap has been uploaded on SQ’s website. Take a look. 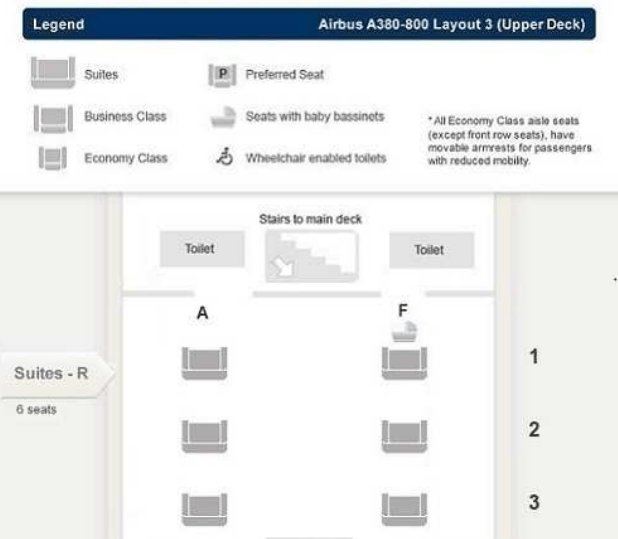 I do wonder what this means for aircraft swaps, however. Suppose they replace an existing fully booked A380 flight with this new aircraft. You’re talking 12 suites becoming 6- what happens to the 6 passengers who don’t have seats? Surely not this.

I’ve been checking the seatmaps for the SIN-SYD route in December and currently don’t see any change- they’re still the old 12 seat suites. So I assume they’ve only uploaded the seatmaps, they haven’t swapped out any inventory on any routes yet.

I’m getting really excited as more and more details about the new Suites cabin come to light. Let’s hope it’s every bit as awesome as it is in my mind.

HT: Someone from the comments section. As in, his/her username is “Someone”

Deal: Buy LifeMiles with a 125% bonus & receive 10% rebate on next award booking

Great find. Not sure I am as excited by this though. Whilst I am sure it will be amazing and raise the bar once again, I am concerned about the impact on award space. The existing Suites product is still pretty awesome and going from 12 to 6 will make Suites award space extremely scarce, if not eliminate it completely. Who needs that much space anyway? It also means fewer J seats so possibly also affects J redemptions, especially on popular business routes such as SIN-LHR. Would have been more excited if they had announced that there would be showers… Read more »

Yeah, sadly I think award space for suites seats, much less a pair of them, will become a bit of a white whale. Pity about the shower, but that’s a bit too out of the box for SQ. Looks like we’ll need to find other ways of getting nekkid at 30,000 ft

Man I was predicting single aisle but 8 seats.. Guess I was too optimistic..

New Singapore Suites A380 Layout Announced - Point Me to the Plane

The layout seems incomplete. The first set of upper deck doors are missing.