SPG and Uber to discontinue partnership

SPG and Uber launched a partnership back in 2015 that allowed SPG members to earn Starwood points whenever they took Uber rides. Originally, you’d earn 2-4 SPG Points (depending on your SPG status) per US$1 spent on rides during Starwood hotel stays, and 1 SPG Point per US$1 spent during other times. That was a fantastic way to pick up some additional SPG points (especially if you were a Platinum-75 member like me earning 4 points per US$1), and it certainly incentivized me to only ever use Uber during my work travels.

But then earlier this year the partnership got devalued. Under the revised scheme, SPG members regardless of status earned 2 SPG Points per US$1 spent on rides during Starwood hotel stays, and 1 SPG Point per US$2 otherwise. That was a serious step backwards, especially with regards to the earning rate during non-stay periods.

And now, the partnership is terminating. From 17 December 2017, you will no longer be able to earn SPG points with Uber rides. You can read the FAQ here, but there’s really not much more to say about it other than adios. 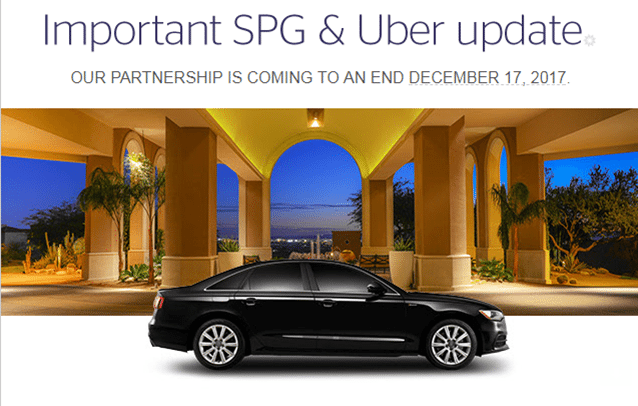 With the demise of the partnership, there is really no compelling reason to stay loyal to Uber (unless perhaps you have a LiveUp account), and this will probably push me towards using Grab more often. Although I’m no fan of the expanded Grab Rewards catalogue, I think there is decent value to be had in redeeming your GR points for Grab vouchers and Krisflyer miles.

It remains to be seen if this is the precursor to Uber forming a partnership with a different hotel chain, starting an in-house loyalty program of its own or simply deciding it doesn’t need one.