Grab Rewards has announced its conversion rate to Krisflyer miles, plus a special promotion until 31 October.

Grab recently announced a partnership with Singapore Airlines which allows passengers to book Grab rides to the airport via the SQ app when departing from Singapore, Malaysia, Indonesia, Vietnam, Thailand and the Philippines.

That cross selling opportunity may be great for Grab, but I don’t understand the value add for consumers, insofar as it saves them one or two screen taps opening up the Grab app and entering the airport as the destination (although Grab is offering $10 of GrabPay credit for the first 5,000 customers to use this function).

What did interest me though was the announcement that Grab Rewards points would be redeemable for Krisflyer miles. I’ve been holding off writing about the partnership because the all important conversion rate had not been announced. However, we now know that- 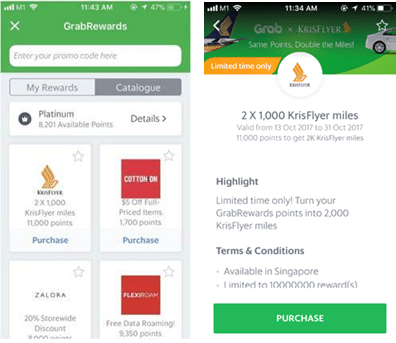 Let’s first think about it from the earning side. When you pay with GrabPay, you earn 16 points per $1. This means

The promotional rates look good, but the above analysis is a bit misleading in the sense that it implicitly assumes you’ll be able to chalk up a block of 11,000 points from now till the end of the month.

11,000 points, mind you, is about $690 of Grab spending, so chances are if you haven’t started collecting Grab points by now you’re definitely not going to be able to build a critical mass to take advantage of the promotion. Which means that realistically, you’re looking at 1.45 miles per dollar extra, on top of the miles you earn via your credit card (4 mpd when you use your DBS Woman’s World card, up to S$2K per month).

But you can also think about this on the redemption side, or what you give up if you opt for KF miles over Grab vouchers. A conservative valuation of a mile would be about 2 cents, although you can easily get more than that if you redeem first or business class flights. The valuation of a mile is a very tricky exercise, and I’d encourage you to have a read of this article.

We know that you can spend your GR points for the following vouchers as a regular member (you can also use GR points for other things, but that’s just a bad idea):

11,000 GR points would therefore be giving up just under $30 of Grab vouchers, in exchange for 1,000 Krisflyer miles worth about $20 (again, I’m assuming you’re not able to take advantage of the launch promo- if you can, then I’d probably go for the miles).

That’s a marginal proposition for me, but how you view this depends on how easily you earn miles. If you’re able to generate a healthy amount of miles from your normal credit card spending, flights, hotel bookings etc, you’re less likely to want to give up transportation vouchers for miles. If on the other hand you don’t really spend enough in other categories to earn a lot of miles, this can be a useful top up.

Another point to note: you can’t use Grab’s weekly promotions in conjunction with a Grab voucher. So, in a way, the value of $1 worth of Grab vouchers is slightly less than $1, because you forewent some “free money” you’d have enjoyed by using the weekly promotion. In that respect, redeeming Krisflyer miles becomes a slightly better proposition.

Say what you will about Grab Rewards, but it’s still more than what Uber is offering. Ever since Uber cut back on the rate you earn SPG points when you ride, I’ve felt less and less inclined to be loyal to that platform.

My main issue with Grab is driver availability, as I always seem to be able to find an Uber ride much more easily than a Grab one (not to mention that Uber tends to be cheaper in my experience, though I’m sure I could find just as many people who would tell me the opposite). Also, the Grab app on Android has an annoying habit of forcing you to turn on your GPS before you can use it.

If you’re the type who can expense Grab/Uber for work, the rational decision would always be to go for Grab because of the ability to accumulate rewards for personal use. And I’m probably going to be doing that going forward. I personally wouldn’t go for the miles conversion option because I don’t have enough points for the promotional rate, and the regular rate isn’t compelling enough for me given that I value the opportunity to earn transport vouchers more than miles (since i’m pretty well covered in that area already).

However, if you prefer another avenue to earn miles or are able to take advantage of the launch promotion, this could be a good opportunity for you.

Not bad lah. Add CC earning rate then a ride can go up to 2.85mpd. Not eye popping but blinking nonetheless.

2.85? With a 1.4 mpd card I suppose? But anyway this line of thinking might not be right in that the 11k threshold to cashout makes the equation more binary. If I hit 11k points then yes, I got the equivalent of such and such mpd. But if I dont, then I have nothing. Ok not really nothing, I can still use the GR points for other things. But you get my point

Promotion rate bad but I would rather spend that $690 on the Krisshop. More worth it that way.

A somewhat related question – what other ways can someone like me without a credit card earn miles?

Without a credit card bro….lol

Literally take the flight and have a royalty program with the airline you are flying. After all, there are many ways to buy an air ticket without the use of a credit card

And/Or, as the Milelion says, the UOB Krisflyer Debit Card. O.o

I cringed saying that term in my head. *shudders*

Is this already available on grab? I’m currently silver tier, and I don’t see it within the rewards that I can redeem 🙁

“Points conversions will start on 13 October for Platinum members, before rolling out for all other tiers from 20 October”

How many times do I need to ride from Jurong West to Bukit Panjang to have enough miles to fly from Singapore to Manila please? In economy class

Just saw 2000 miles credited to my KF account. Took 3 days to process, including the weekend.