SQ now provides complimentary WiFi for First/Suites, Business and PPS passengers. But just how good is this in-flight connectivity?

Recently, SQ announced that it would be providing complimentary WiFi for First, Business and PPS passengers. Reactions seemed to be rather tepid, including sentiments like “30MB? What can you do with that pathetic amount?” and “WiFi is a basic human right that should be included for all passengers!” (I paraphrase).

So a few days back I was flying on SQ236 (BNE-SIN, A350 J) and spotted this card advertising the WiFi service. 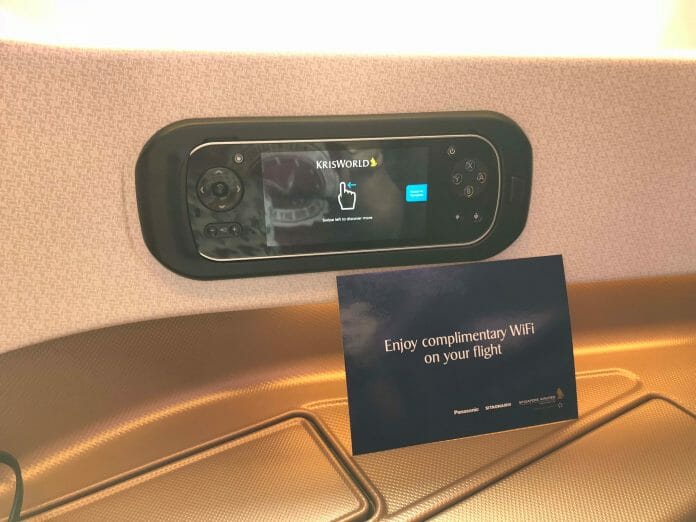 Flipping it over, some simple instructions are given for connecting to the complimentary WiFi. 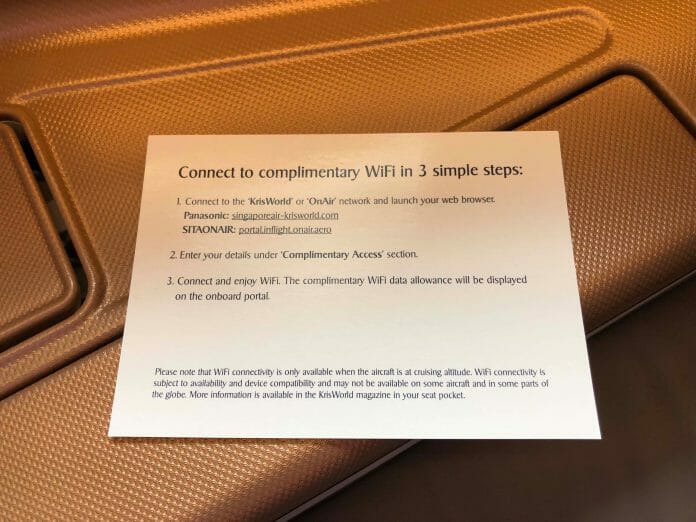 Like most people, I wasn’t too impressed by the 30MB limit, but figured that I’d give it a try anyway. After all, free is free!

The first part of step 1 involves connecting to the WiFi network. Unfortunately, for several minutes I seemed to be having trouble getting my iOS device connected to the network.

Through sheer dogged determination, I was able to resolve this issue. This involved giving up, returning to my in-flight movie and later noticing that the connection had been successfully established.

(My first thought was that there was some compatibility issue with iOS, but after having tried it out, I now suspect that the slow speed was to blame for the time it took to establish a connection.)

From there, the procedure was rather straightforward – you just key in some details (surname and seat number, as I recall) and then you’re good to go.

Credit card details are not required, so you don’t automatically get billed if you hit the data limit – kudos to SQ for not going down that path!

The J cabin was half-empty for that flight, so I expected the connection speed to be rather decent, with not too many people using it. For some objective measure of the connection speed, I ran Speedtest while connected to the network and measured a 0.08Mbps download speed. 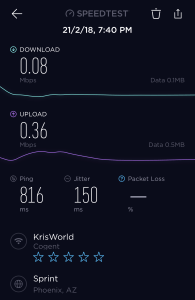 In other words – it’s super-slow.

When subjecting the network to some real-world usage, I found it to be still usable, albeit annoyingly slow. To get some sense of the usage experience, I attempted to try web browsing, messaging, as well as firing up a (web-connected) mobile game.

The Milelion website is optimised for mobile browsing, so it was a natural choice for trying out the web browsing experience.

The main page contains a whole bunch of content, but still manages to load completely in about 5 seconds on my home network. Using the in-flight WiFi, it took approximately:

The progress bar peaks around the halfway mark during the 1min I spent attempting this, and when scrolling through the page you can see that some images have yet to be completely loaded.

The Milelion Telegram group seemed a natural choice for testing how feasible messaging was while in the air.

For the most part, there wasn’t too much problem loading text within the app. I’d disabled media auto-downloading to save bandwidth – attempting to download a small 23kB image took 10s, which is… insanely slow.

If you really wanted to frivolously burn through data, why not indulge in some mobile gaming? Now, I know that Pokemon Go has waned in popularity since it first launched, but it was one of the few games I had handy on my phone; so until the day Aaron launches a Milelion mobile game I suppose this will have to do for testing purposes.

It took about 19s for the game to load, and unfortunately the game was unable to get a location fix (I assume the aircraft body messes with GPS signals) so I was unable to see my in-game avatar sprinting over the oceans at superhuman speeds. The games takes about 9s to load on my home network, so I can only assume the difference in speed is due to the slow connection speed.

Free WiFi is better than no WiFi, I suppose, but when it’s that slow I begin to wonder if I’m better off not bothering. The frustration of waiting for things to load might just outweigh the utility of having internet access!

(That said, this is just one experience within a rather short duration on a single flight – I can’t be sure if it’s representative of SQ’s in-flight WiFi experience in general.)

Additionally, 30MB goes by really really quickly, even at such slow speeds. If you’re not willing to pay for additional data, you’d need to ration this – I’d suggest avoiding image/video downloads and just using it to check in occasionally on your messaging apps and emails every now and then.

I’d initially agreed with all the negative sentiment regarding the low data cap, but after trying it out my opinion has shifted slightly. While I still think 30MB is a rather pathetic amount (especially for long-haul flights), I’m guessing that the system would be even more unusable if all passengers were to be allowed unlimited WiFi access.

Has anyone experienced good in-flight WiFi, though? It’s not usually a feature I look out for, but I’m curious if the technology has progressed far enough for it to actually be an enjoyable experience – based on some (Google) research it seems like the technology is improving, with download speeds fast enough to even support Netflix video streaming (as of May 2017).

Louis Tan
Louis believes he caught the premium travel bug after attaining KrisFlyer Elite Gold and occasionally being upgraded while shuttling between the UK, Singapore and Japan (in economy class). These travels have led to a wonderful marriage, as well as a burning desire to avoid flying long-haul economy. He previously travelled with a gryphon plush toy, Griffles, which often stood in for him in vacation photos. Griffles is mostly busy with entertaining a toddler these days, but still manages to continues amusing (and confusing) air stewardesses, hotel staff (and just about everybody else) all around the world.
Previous article
Emirates unveils new business class layout for their Boeing 777-200LR aircraft
Next article
Restaurant dining with Priority Pass: Corretto Cafe & Bar, BNE

I have enjoyed free, usable, not too slow and unlimited wifi in Finnair, Oman, Emirates and Turkish biz cabins. Had long whatsapp discussions and nobody realised I was on a plane.

I was on Alaska Airlines last summer, and was pleasantly surprised that they offered free chat for every class, using iMessage, WhatsApp & Facebook Messenger.

Seriously, if you need connection and communication that badly when in flight, you can’t go wrong with any of these messaging apps. Unless you are behind the Great Firewall of China.

But hey, Free., who’s gonna complain? Even managed to send quite a few “above the clouds” pics in quasi-realtime. Did I also mention, EVERY CLASS?

I used perfectly adequate free Wi-Fi on-board an SAS long haul flight in 2006, thanks to Connexion by Boeing. Alas, it was just before the smart phone boom and the market wasn’t ready, so they gave up. https://www.macworld.com/article/1052458/connexion.html

On an intra-European SAS flight sometime in the past 3-4 years I had no issue streaming Netflix throughout the flight and sending/receiving photos, also free at the time.

you can always ask the staff for another card with 30mb data. i ask for 3 last time

Not sure this works now – the login isn’t tied to anything on the card, but instead your seat number.

they have cards with codes to type in to the field instead. just ask, no harm. they think you’ve paid 20k for your ticket hahaha

I was taking China Southern Airline, the wifi is free and I was able to using face time with my wife. I tried SQ wifi last week, as Louis mentioned, it was super slow.

I hit download speeds of 8mbps on SQ’s 77WN flying FRA-SIN, before the complimentary wifi was rolled out.

Glad to know it’s (hopefully) not fleet-wide. Judging from the descriptions of positive WiFi experiences with other airlines, it seems like improvements can certainly be made there!

The WiFi on Eva 77w is pretty awesome. I could VPN to office and download large emails and PDF and even WhatsApp video call

I guess the route you fly has an impact on the speed too.

Basically your internet connection is dependent on Line of Sight to the orbiting satellites above. If that part of globe is not well covered by the service provider constellation of satellites or if you are flying through thick clouds/thunderstorms, basically expect to have alot of variance in the quality of service.

This makes sense. Thanks for sharing – hadn’t considered the impact of geographical location, in particular.

Transcontinental in JetBlue with free wi-fi and free satellite tv. Highly useable. Booked my SFO hotel in the air while watching chelsea-arsenal live and my mate shopping on Amazon and Walmart.

I took the usd5 20mb scoot wifi last year after taking a nap in the early part of the flight – SIN-SYD ran out of data but SYD-SIN managed to make it last, just chatting on whatsapp

Flew SYD-SIN last week and all WiFi was good for is iMessage and WhatsApp. Connectivity of phone to IFE has also been terrible too, but the SQ app seems to freeze a lot on my iPhone.
SIN-JNB yesterday had zero connectivity.

I flew VA PER-BNE on one of their WiFi enabled 737’s and both me and +1 streamed Netflix gate to gate in HD.

Your Singapore Airlines inflight Wi-Fi and connectivity guide – The MileLion

[…] Louis has done a rather unscientific testing of inflight Wi-Fi speeds which you can read about here. […]