A review of Singapore Airlines' 2013 business class product onboard their new A350s.

The A350 joined the Singapore Airlines fleet in early 2016 and this was my first time on the aircraft. I had planned to go on a trip to Europe at the end of February and I managed to find availability to Rome around the dates I wanted.I did my search in the first week of January so it was only about 7 weeks away, so I guess I was pretty lucky.

As I had not taken the A350 yet, so I booked the flight to check out the product. As I was planning to use my Citibank Prestige during this trip, I booked the free airport transfer from my home and the return as well.

The T&C states that I can use the transfer 8 times a year, a maximum of 4 per quarter and I needed to spend $1500 in foreign currency in that quarter.

The vehicle arrived before the scheduled time and I arrived at the airport smoothly and into the crowded Silverkris lounge. I was seated in 21F, which is in the second section of Business Class.

Having experienced this Business Class seat before on the B777 back in 2015, I seem to remember it was slightly more spacious during that flight. 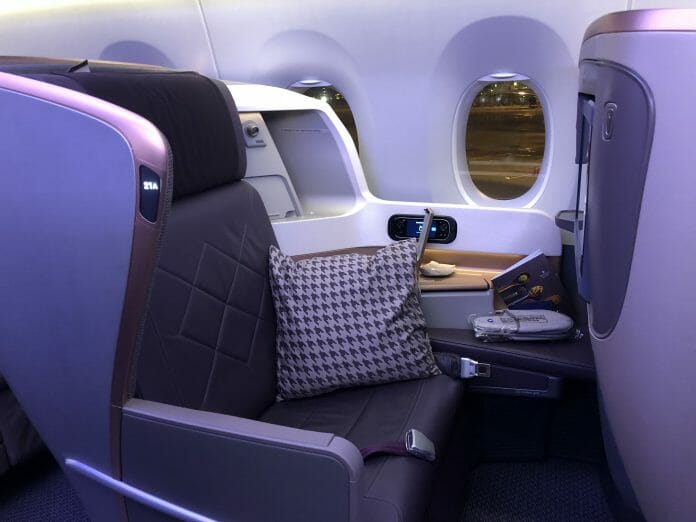 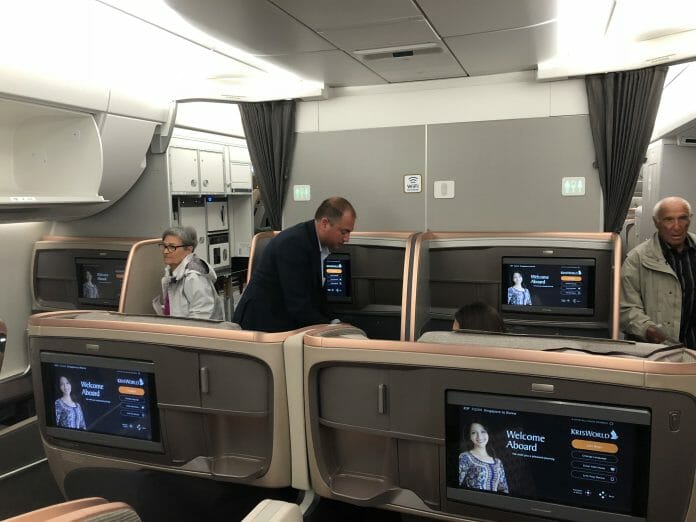 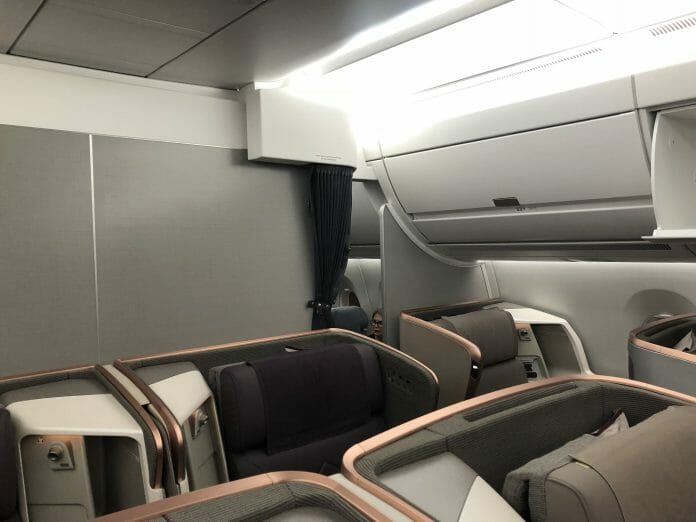 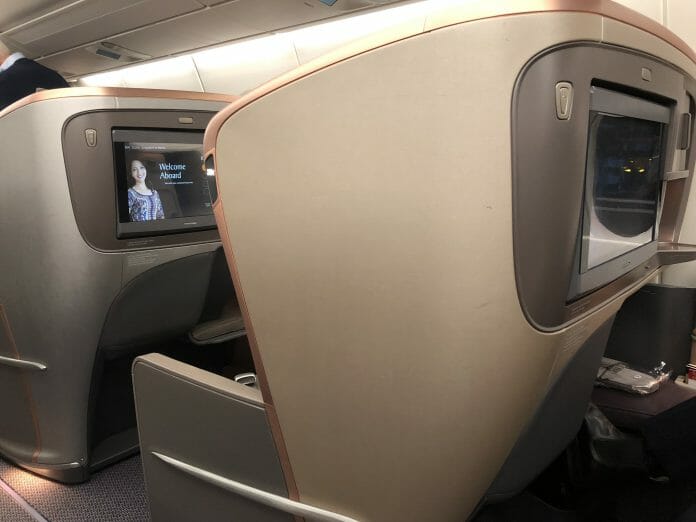 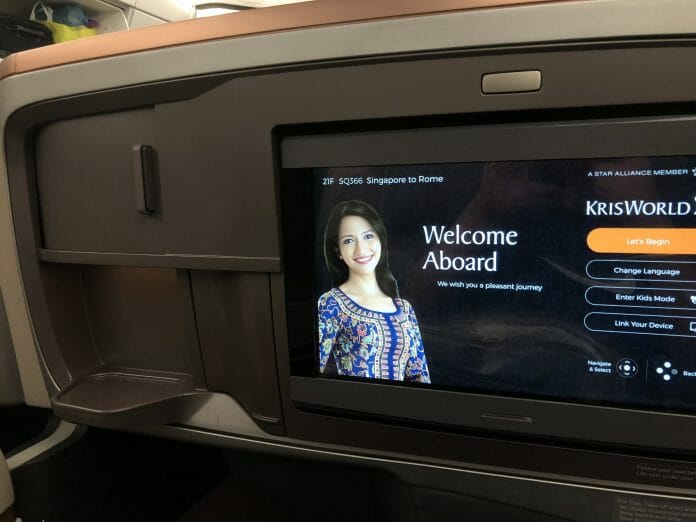 After the usual drinks and hot towels, we were off the ground and I tried the new free WIFI. 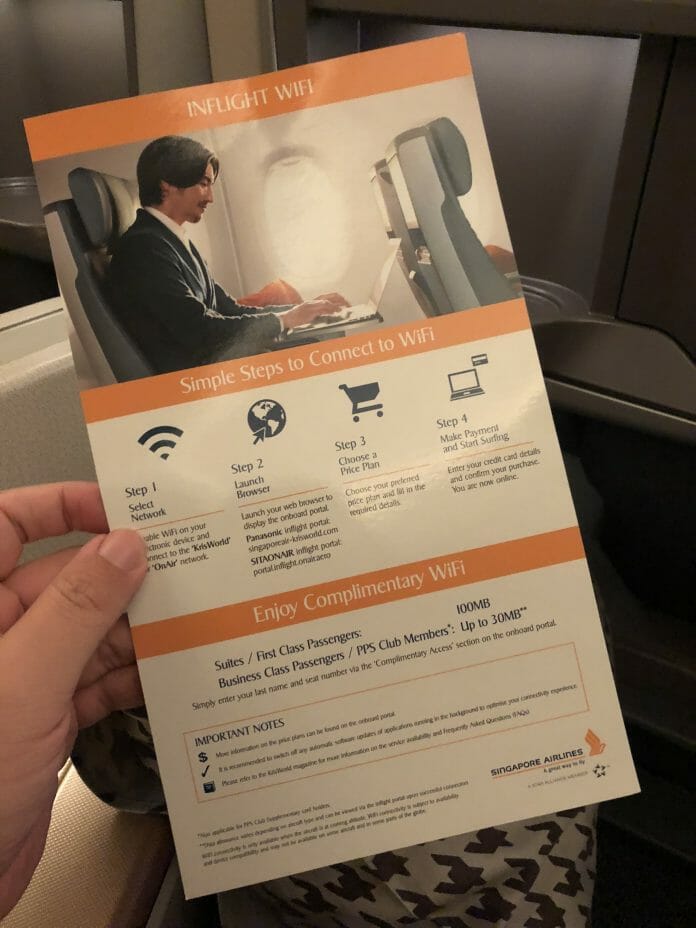 I found that I had to type in “singaporeair-krisworld.com” as it did not connect automatically.

After that, it was rather straightforward and I was connected to the internet!

I checked Facebook once and I was down by 3 megabytes.

Speedwise, it felt ok but I only had that little data to play with. Louis did a fantastic detailed review of it previously. 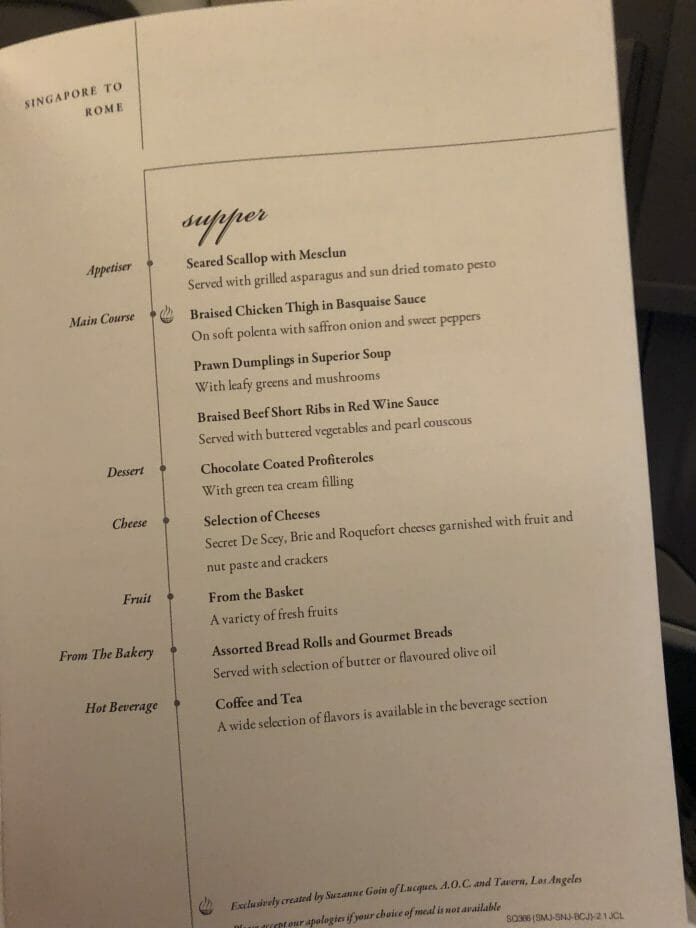 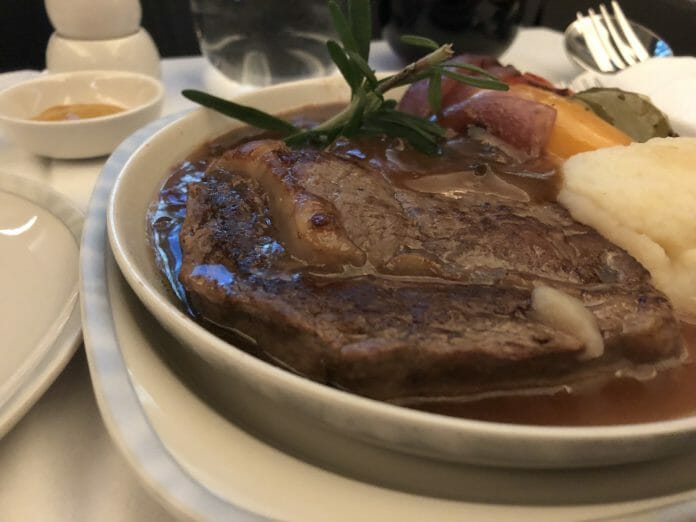 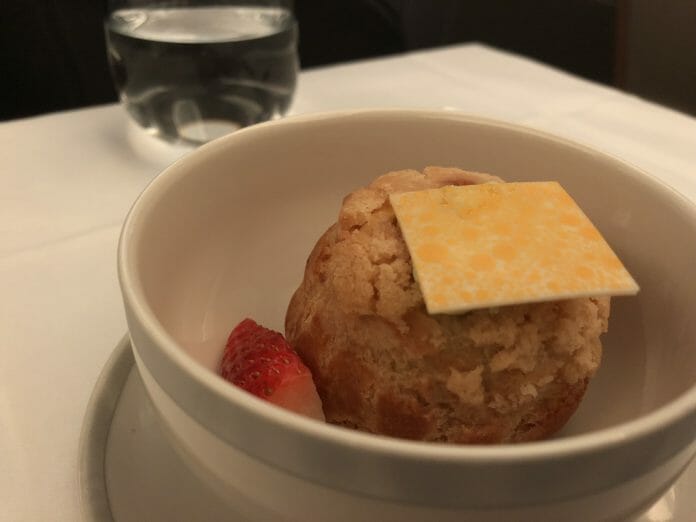 I ordered the “6 oz Rib eye steak” for this flight and was quite disappointed. Even the picture looks that way.

I did not finished the meal and the inflight manager Judy asked me how it was and if I wanted anything else. I politely declined and prepared for sleep.

After a satisfactory 8hr rest, I woke up to breakfast.

I chose the “grilled angus beef burger” and felt that I made a bad decision again.

I have had beef on Singapore Airlines previously and it was not this bad!

Again, Ms Judy asked if I wanted anything else, but I just did not feel like eating. 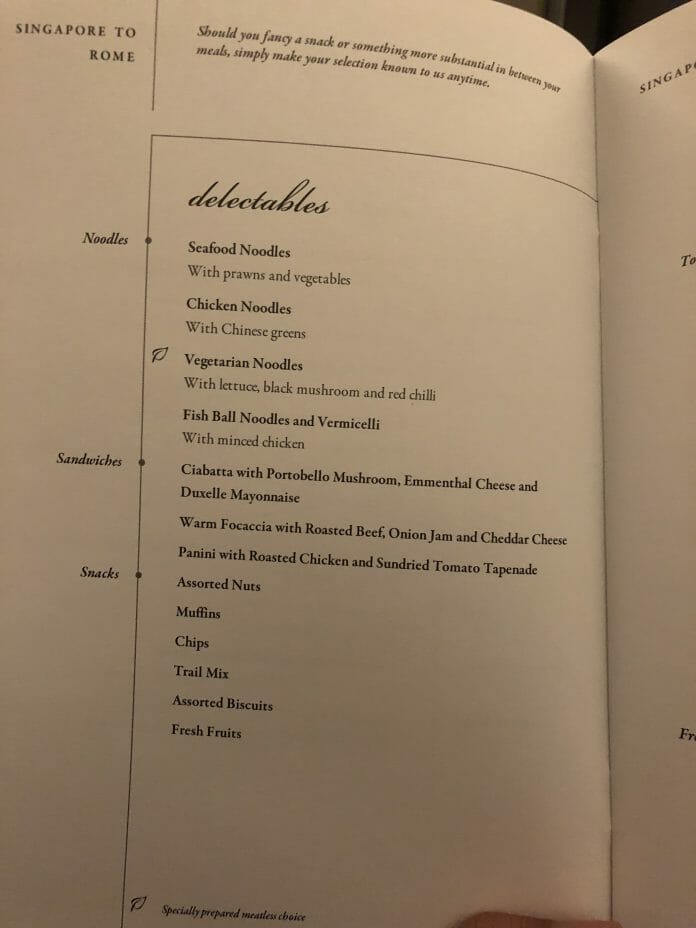 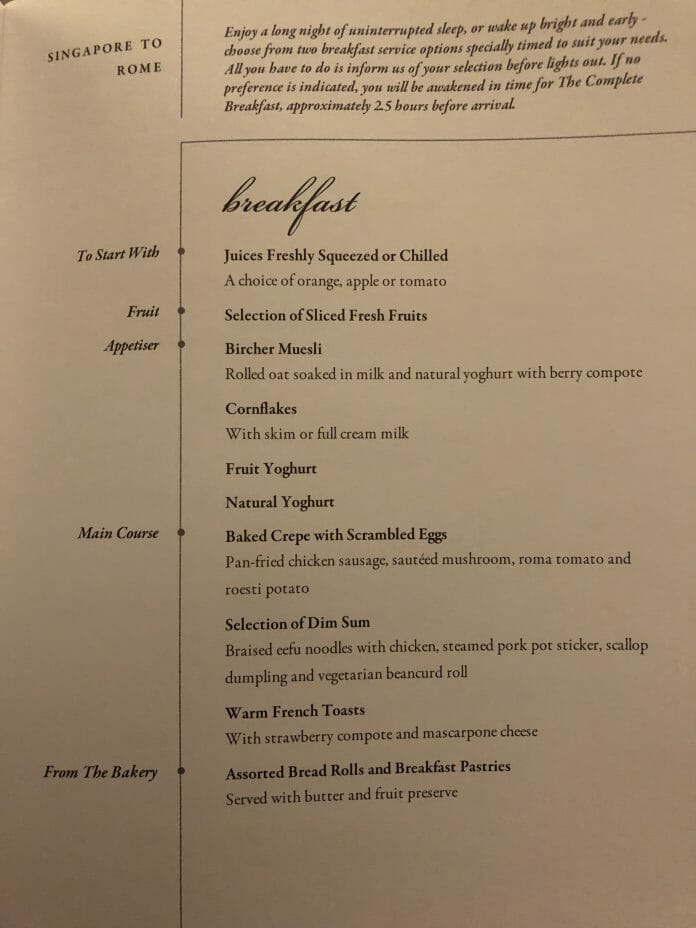 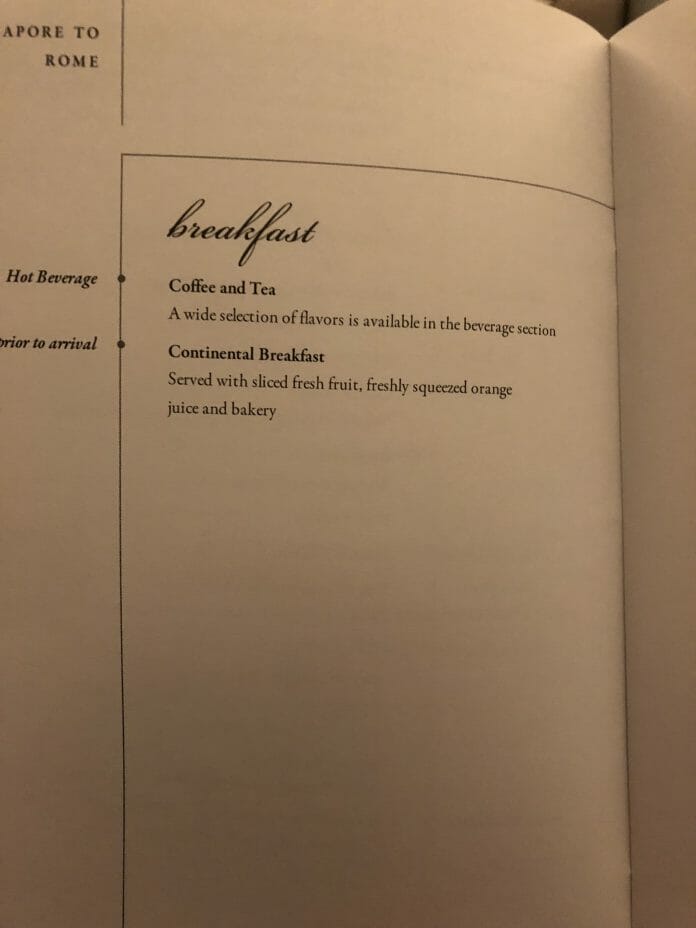 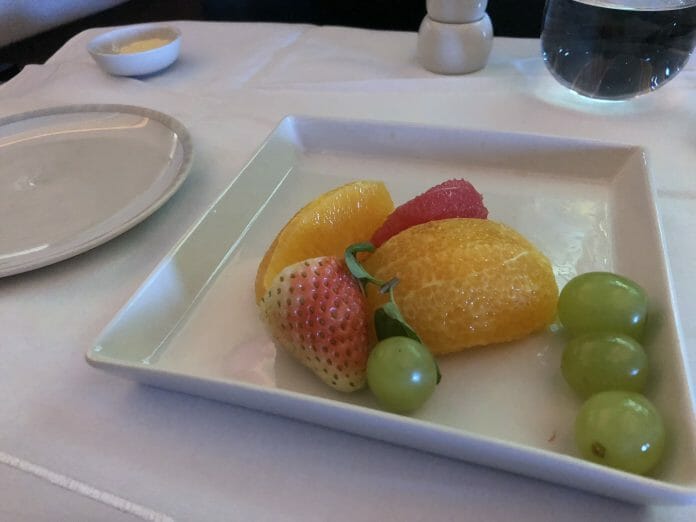 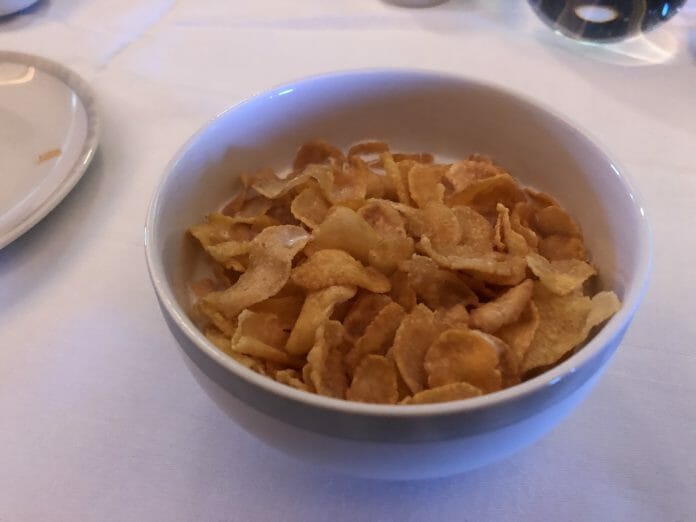 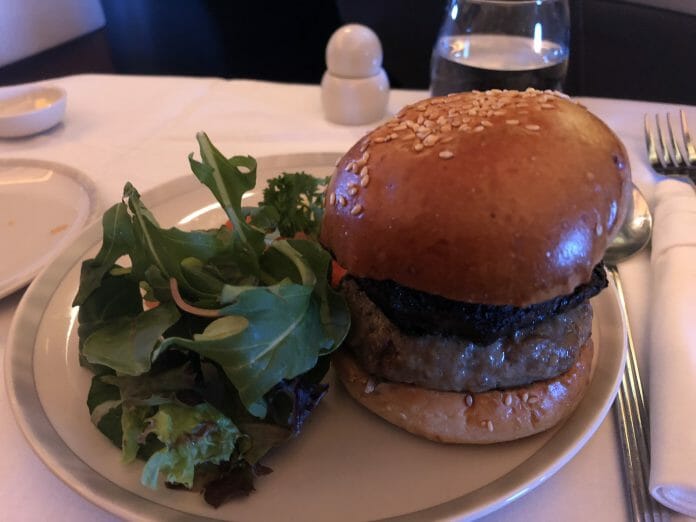 It was time to land after the not-so-great breakfast and I arrived in Rome safely and on time!

I have to mention Ms Judy again for her attentiveness during the flight and I saw her many times walking the aisles to check on the passengers.

Next up, the Le Meridien Rome!

Fred Ee
Dr Frederick Ee is a medical doctor, author, blogger and traveler. He discovered his passion for travel on his first long-haul trip to New York City in 2012. His quest for premium travel experiences started on that very same flight as he endured a smelly foot beside him from the passenger behind him for the 24 hours of flight from Singapore to New York. He blogs at goodhotelreview.blogspot.com, focusing on hotel experiences. His most memorable moment of travel was to participate in the resuscitation of a collapsed patient during a long flight to Paris. Feel free to add him on Facebook with a message and his Instagram at @drfrederickee. He would like to thank MileLion for having him as a guest writer and hope readers would enjoy his writings and musings.
Previous articleRadisson Hotels EMEA sale: up to 30% off
Next articleHere are 2018’s USTA Daily Getaway deals

Was this a Kris Flyer award? Since it was only 7 weeks before the trip, were you placed on waitlist and if so, how long did it take for the waitlist to clear?

I completely agree with you on both the 6 oz Ribeye Steak AND the Grilled Angus Beef Burger (albeit on separate flights) and they were BOTH terrible/inedible.. I’ve actuallly started a mini mission of sorts to try different Book The Cook items and see how many are actually decent-to-good and so far, that list is sadly quite short.

This sounds like a tasty mission that deserves its very own guest post! Sure plenty of ppl (myself included) would appreciate the reference. =)

Sadly, no.. cos many many more misses than hits..

As mentioned in reply to Aaron, I’d be happy to share pics/memories from those I have (I don’t have all)..

i know people who have done this, but not in any organized manner. if we pool all our photos together…we might be able to get a visual menu for BTC going. that’s a worthy goal, methinks

You’d have my email addy, Aaron.. email me and I’ll be happy to share my pics and comments to you and you can consolidate, no issue with me.. don’t need credit either.. ?

Happy to participate…Aaron please start a new post so that I can upload my BTC photos 😀 would be fun!!

Aaron’s mailbox quota may just explode with this.. I’ve already sent him about 20 pics.. ha!

How is this even a review??

“Having experienced this Business Class seat before on the B777 back in 2015, I seem to remember it was slightly more spacious during that flight.”

If you wanted to know more about the seat, maybe just go look for that (or another) review..?

He did review the food and said it was bad.. also the wifi, and added that a previous more detailed one was done prior..

Had Fred simply repeated stuff from previously done review on product, would you then accuse him of being repetitive?

Hi…
What a dissapointing inflight meal that you had mentioned. Hope it doesn’t affect your travel. Is the food really that bad? How is the Lie Flat Bed? Would love to fly SQ Biz Class this coming December 2018.