Some weird. Some rewarding. Some downright confusing.

Have you ever taken the time to do a deep dive, and I really mean a deep dive, into the T&Cs of your favorite miles card? Most of us (me included) just look for keywords like caps, definitions and exclusions, eyes glazing over the rest of the legalese that clouds such documents.

But the devil’s in the details. I recently sat down to read through the T&Cs of every major bank rewards program, and found some pretty interesting things. Some are merely amusing, some are even helpful, but others can be downright detrimental to your miles and points balance if you’re unaware of them.

Here they are, in no particular order of merit:

UOB: UNI$ will be deducted automatically to cover your annual fee

This is a common complaint of UOB cardholders: they see their UNI$ balance has dropped but don’t remember doing any redemption and are quite certain their points haven’t expired.

Upon closer inspection, they find that UNI$ have been automatically deducted to cover their card’s annual fee. They make noise. The bank gives a waiver and reinstates the UNI$. And the cycle repeats one year later.

Keep in mind, that’s only for people who actively monitor their UNI$ balance. I wonder how many people have lost their UNI$ and don’t even know it. Although DBS and other banks also allow you to redeem points for annual fee waivers, UOB is the only bank which does this automatically.

You might think this is kind of shady, but it’s all above board, of course, as per UOB’s T&Cs:

Moral of the story: monitor your UNI$!

I wrote a recent article about what happens to your points when you cancel a card. In this I noted that UOB points are already pooled together under a centralized account, so cancelling one card doesn’t mean losing those points so long as you have another UOB card that earns UNI$.

That’s not what the T&C say:

The wording above suggests that once you cancel a particular principal card, the UNI$ on said card are forfeited too. In practice, however, this doesn’t happen, and I can confirm both from personal experience and conversations with the CSOs that UNI$ on cancelled cards are pooled with the UNI$ on whatever other UOB cards you still hold.

By right, by left…

UOB: UNI$ are only awarded for personal spending

1.6 Should Cardmembers’ spending be deemed to be for commercial and/or non-personal purposes, UOB reserves the right to refuse to award any UNI$ for such transactions.

In reality though, that doesn’t really happen. Many companies don’t offer their employees corporate cards, allowing them instead to incur expenses on their personal cards before getting reimbursed later (and we as employees like this very much, thank you). It’s how so many management consultants and other jetsetting occupations chalk up a healthy miles balance from their expenses. I can even think of more than a few sole proprietors who shun corporate cards, preferring the higher rewards of personal cards.

UOB is the only program which adds specific language regarding the right to revoke such UNI$. The question, as always, is how this is going to be enforced. It’s simply not feasible for the bank to micro-monitor every transaction investigate whether it was truly for personal uses. My theory is this term exists as a sort of insurance policy, in case someone incurs an insane amount of points on a one time large spend. But wouldn’t you want to reward your highest spending customers?

I wouldn’t sweat too much about this term, but you should know that it exists.

Citibank: All your Thank You points expire on a certain date

In actuality, what happens is that when you open your Citibank Rewards card, a 5 year period starts. At the end of this 5 year period (plus 3 month’s grace), all points tagged to that particular card expire.

Check out your points summary on the Citibank website if you don’t believe me. Here’s what I see for all the points accumulated on my Citibank Rewards Visa:

Now I can’t quite explain why they’re broken into 3 batches (and many other people report seeing the same thing too), but what is clear is that points expire in batches. There’s a big chunk of points expiring on 31 May 2020, which would include points that I’ve earned at various dates over the past few years.

I have to say this is a strange, strange policy, but policy it is nonetheless so beware!

Maybank: You can accumulate a maximum of 1 million points and the bank may forfeit the rest

Nestled away in the Maybank TREAT Point’s T&Cs is this little gem:

2.8 Eligible Cardmembers can accumulate up to a maximum of 1,000,000 TREATS Points. Maybank reserves the right to forfeit any TREATS Points earned in excess of the aforesaid amount without notice or liability to any person.

And again later on:

10.5 Rewards Infinite members may accumulate any unused TREATS Points from their various Maybank Credit/ Debit Cards up to a maximum of 1,000,000 TREATS Points. Maybank reserves the right to forfeit any TREATS Points earned in excess of the aforesaid amount without notice or liability to any person.

1,000,000 TREATS points is 400,000 airline miles, which is a hefty figure but not beyond the realm of possibility. Someone who spends big on his Maybank Horizon Visa Signature and Maybank Visa Infinite could conceivably accumulate that figure over a period of time.

What’s weird is that the T&C state a maximum number of TREATS points you can hold at any time, while giving the bank the power to forfeit anything earned in excess of that! To re-emphasize: I have no idea if this term is actively enforced, but why would a bank want to penalize someone for spending too much?

I’m all for better health, but DBS Reward’s T&Cs take this to another level:

4.5 The use of Redemption Voucher for any tobacco or tobacco related product purchases are not allowed.

I know that the NTUC vouchers offered by DBS Rewards have that stipulation: 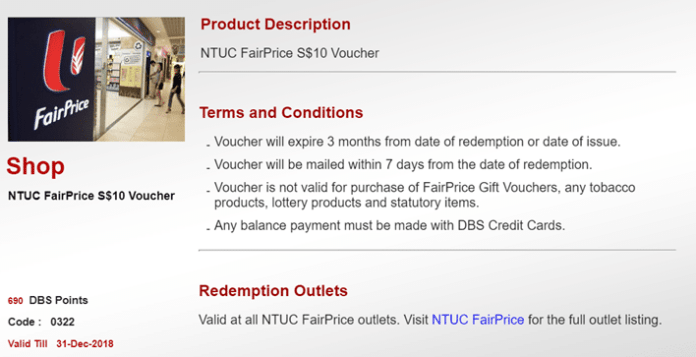 But I don’t see this on the T&Cs for any of the other vouchers such as CapitaMall. How will they enforce this term? Your guess is as good as mine.

Most banks strictly don’t allow the transfer of rewards points among members. The reason is pretty simple- they don’t want a secondary market for points forming. That’s why I was so surprised to learn that OCBC allows the transfer of points from one member to another, with the payment of an admin fee.

We can add one more bank to that list, because I found something similar in the SCB T&Cs:

Dredging through the T&Cs does bring up interesting tidbits like those above. They’re not all bad, in fact, some of them (like the SCB points transfer policy) are even beneficial. Others can be nasty gotchas if you’re not careful.

It’s worth noting that banks don’t always strictly follow their own rules, as we see with UOB and cancelled cards for example. Many other banks specify waiting times of up to three weeks for the transfer of points to frequent flyer programs, although we know from our experience it tends to be much faster. These terms are mainly there for liability purposes.

Anyone else found anything interesting lurking in the T&Cs?

Another brilliant article! This is what separates Milelion from the other copycat miles blogs!

What I dislike is no company give a heads up when your annual renewal is up. How hard can a notifications email be. They can spend millions on email ads but can’t implement a simple reminder when your renewal is up perhaps in the next 2 weeks or month. This makes it tricky for consumers. Wish MAS has some rule to notify customers

Good that the MAS hasn’t come up with ideas like yours. The MAS is not a consumer association. It is a financial regulator whose duty first and foremost is to ensure the stability and security of the financial markets in SIngapore – this being done by regulation of the various types of businesses that fall within its purview. The MAS is much more concerned about solvency and capital adequacy and how a financial institution may negatively affect the stability of the Singapore economy, than about “pro-consumer” practices. There is nothing inherently wrong about a bank not telling you when your… Read more »

Have you considered using the ‘Calendar’ function on your handphone? You CAN set it to remind you on same date every month.. can even set second alarm to remind you again.. different dates for different cards/loans, even…

A spoon can be a very desired tool for some.

This post is a life saver!! I immediately checked and notice my citi thank you points is expired in March ! And 2 days left for the grace period

glad it helped- i hope you’re wasting no time cashing them out…maybe etihad guest might interest you?