Centurion Lounges are one of the perks of Platinum Charge card membership- here's an inside look at the IAH facility.

The Centurion Lounges are undoubtedly the crown jewel of this collection. The first AMEX Centurion Lounge opened its doors at DFW back in October 2013, and as of today, a total of 9 lounges are currently in operation. Almost all the lounge are US-based, although the first international lounge opened in Hong Kong in 2017 which makes me hopeful that more will follow.

I was flying from IAH to head home after reviewing the World’s Longest Flight, which meant I’d have a chance to try out the Centurion Lounge located in Terminal D.

The Centurion Lounge is hard to miss- you’ll see a sign for it straight after security. 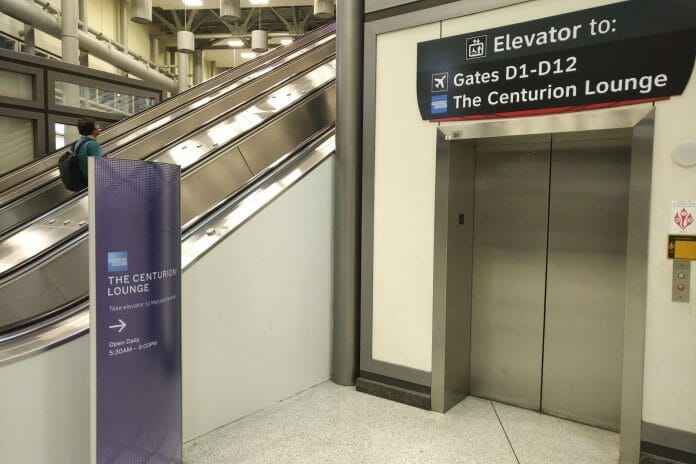 There’s plenty of signage for the Centurion Lounge all over IAH. The lounge’s name is even stenciled on the lift button. You’ll ride the elevator to the Mezzanine floor… 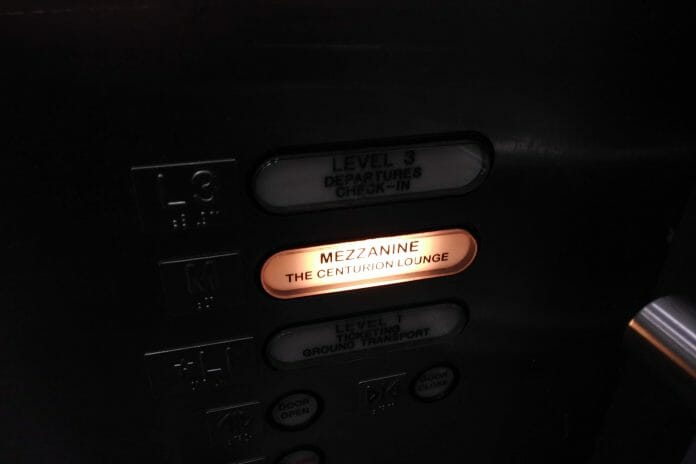 …after which it’s a short walk down a corridor to the Centurion Lounge. 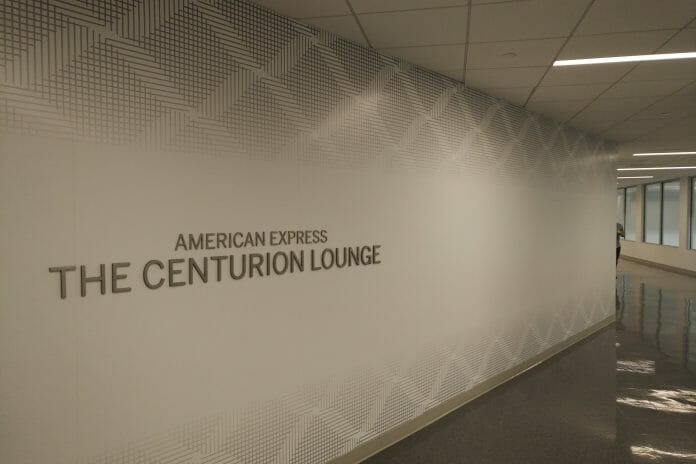 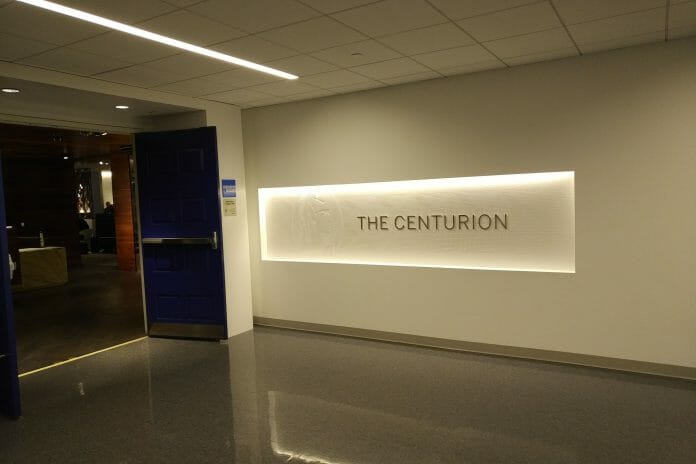 The 8,500 square foot IAH Centurion Lounge opened in July 2016, and takes guests from 5.30 am to 9.30 pm daily. The greeter at the desk could not have been more warm and welcoming. She got even more excited when I told her this was my first visit to a Centurion Lounge, and asked me to fill out a feedback form to request for one in Singapore (honestly- unlikely until T5 opens up, although one can dream). 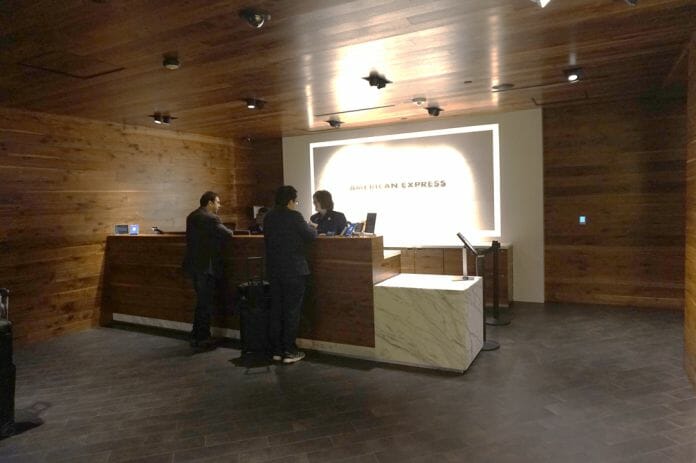 Come to think of it, all my interactions with the staff in the Centurion Lounge were nothing short of amazing- it was like meeting AMEX customer service in person. 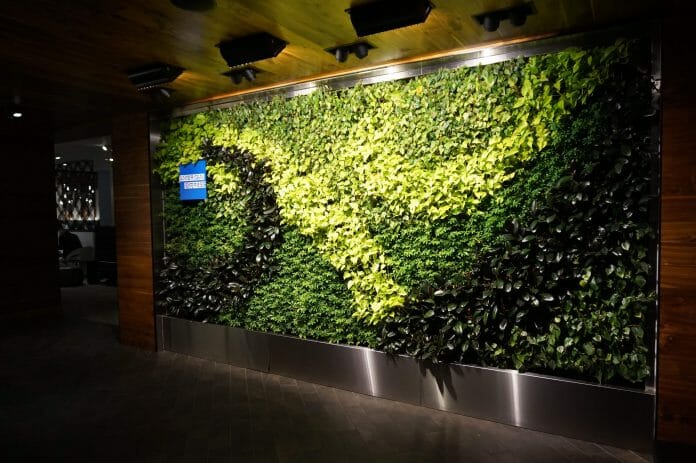 I arrived at the lounge just after 8.30 am, and already the facility looked to be about 70-80% full. Overcrowding in the Centurion Lounges has been a real issue, and AMEX has attempted to address this by removing the day pass option (it used to be that any AMEX cardholder could purchase a U$50 day pass) across all lounges and limiting access to two hours before a departing flight at lounges with extreme capacity issues. 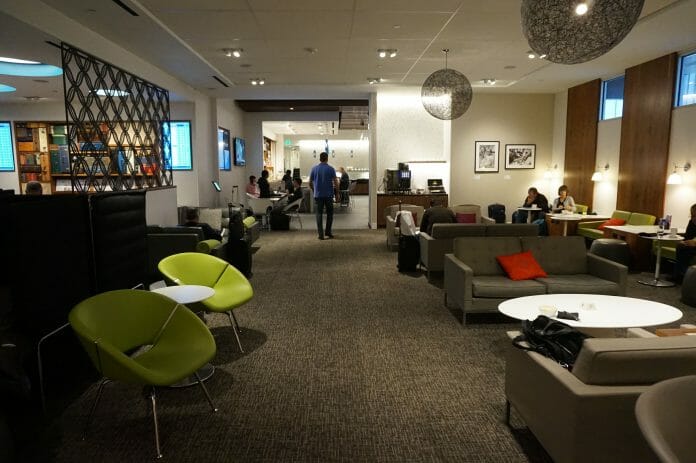 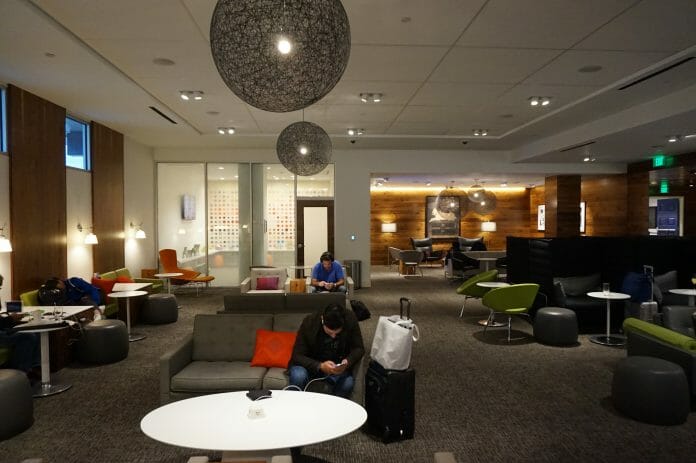 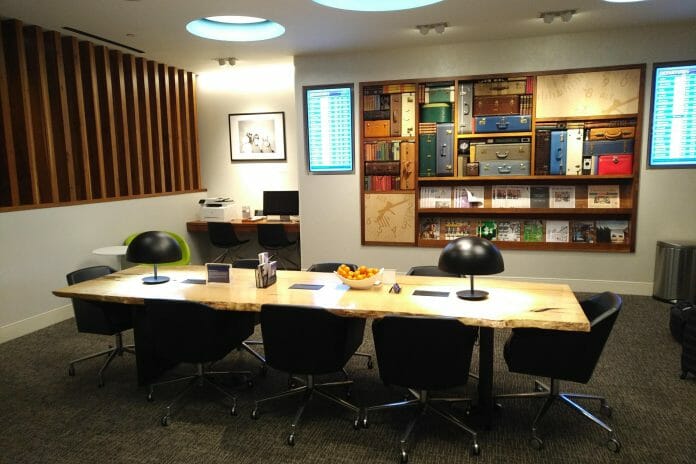 All things considered, first impressions of the lounge were great- full marks for interior design. Although the lounge has almost no windows, it never felt oppressively dark thanks to the abundant lighting and occasional splash of color. There were plenty of power outlets and speedy Wi-Fi for getting work done. Tables were cleared quickly after people left.

Travelers with family members in tow (AMEX Platinum Charge cardholders can bring in up to 2 guests, and supplementary cardholders get the same guesting allowances as main cardholders) will be happy to know that there’s a kids room with brightly colored distractions for the little ones. 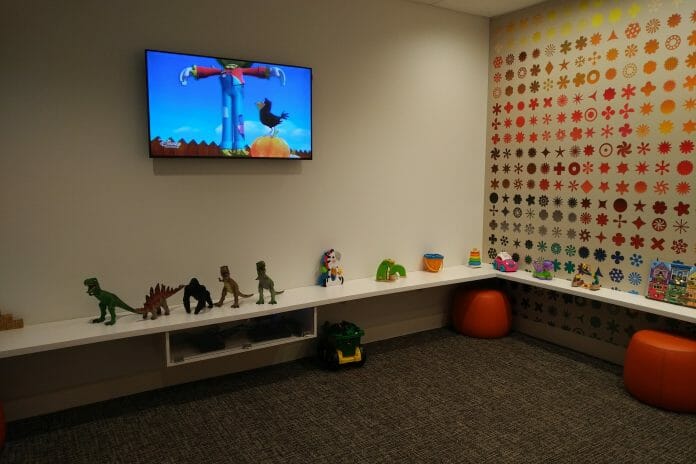 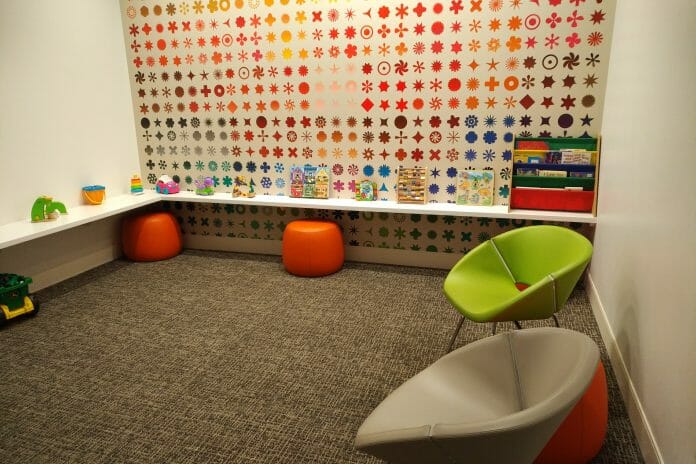 Away from the lounging and seating areas, the lounge opens up into a dining room with a full service bar (cocktails available from 10.30am). 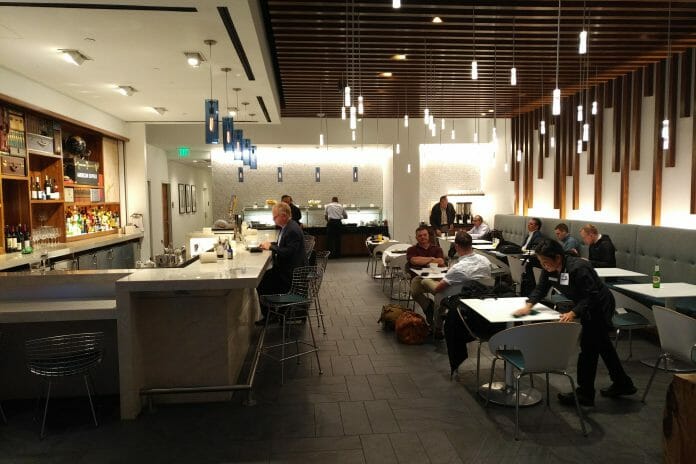 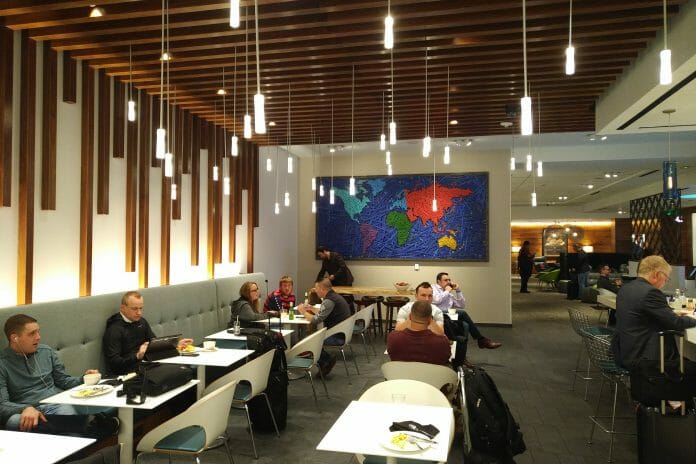 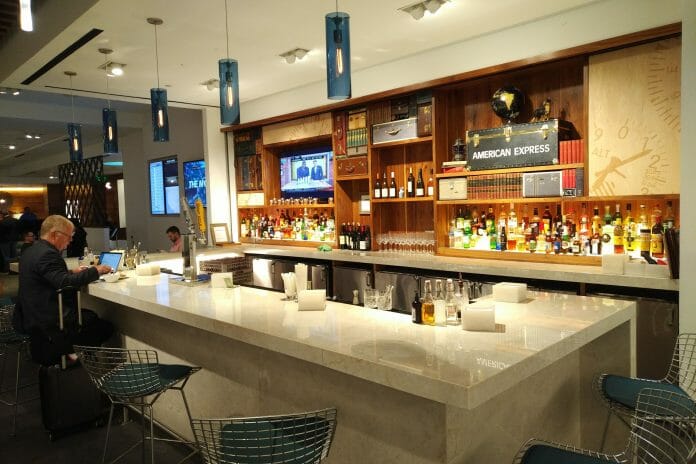 At the bar I was served by the aptly-named Joy, who hails from the Philippines. She was thrilled to hear I came from Singapore, and launched into recommendations of places to visit in the Philippines (“don’t bother with Boracay,” she says). She also talked about how proud she was to work at the Centurion Lounge, and gave me a bit of background about the facility.

I figured it was never too early for sparkling wine, and Joy was only too happy to crack open a bottle. The Centurion Lounge doesn’t have champagne, but does serve a very good prosecco. Protip: when choosing prosecco, go for DOCG bottles rather than DOC. DOCG is the label reserved for the top Italian wines, and has much stricter quality criteria than the regular DOC label. Had I been more adventurous, I could also have chosen from the following selections:

The IAH lounge doesn’t have dine-on-demand (I think most of the Centurion lounges don’t, but I could be mistaken), focusing instead on offering a high-quality buffet. AMEX really plays up the dining credentials of its Centurion lounges, and proudly trumpets the fact that the menus are designed by James Beard/Michelin-awarded chefs. The menu at IAH was designed by Justin Yu, he of Oxheart fame. 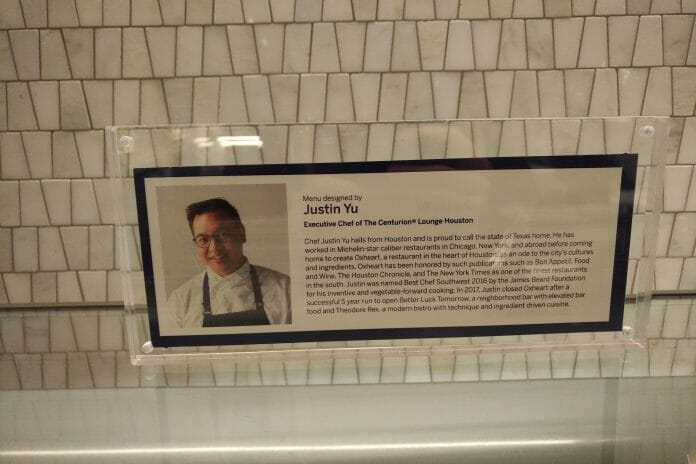 In case you can’t read the bio:

Chef Justin Yu hails from Houston and is proud to call the state of Texas home. He has worked in Michelin-star caliber restaurants in Chicago, New York, and abroad before coming home to create Oxheart, a restaurant in the heart of Houston, as an ode to the city’s cultures and ingredients. Oxheart has been honored by such publications such as Bon Appetit, Food and Wine, The Houston Chronicle, and The New York Times as one of the finest restaurants in the south. Justin was named Best Chef Southwest 2016 by the James Beard Foundation for his inventive and vegetable-forward cooking. In 2017, Justin closed Oxheart after a successful 5 year run to open Better Luck Tomorrow, a neighborhood bar with elevated bar food and Theodore Rex, a modern bistro with technique and ingredient driven cuisine.

The sample menu on the IAH lounge’s website lists the following:

Which more or less matched what was on offer. 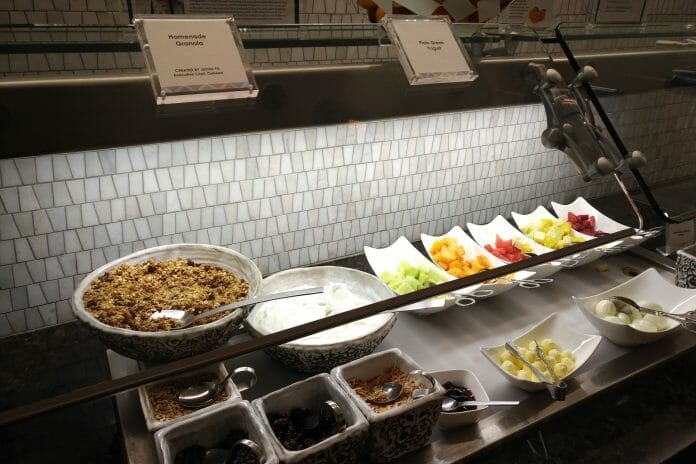 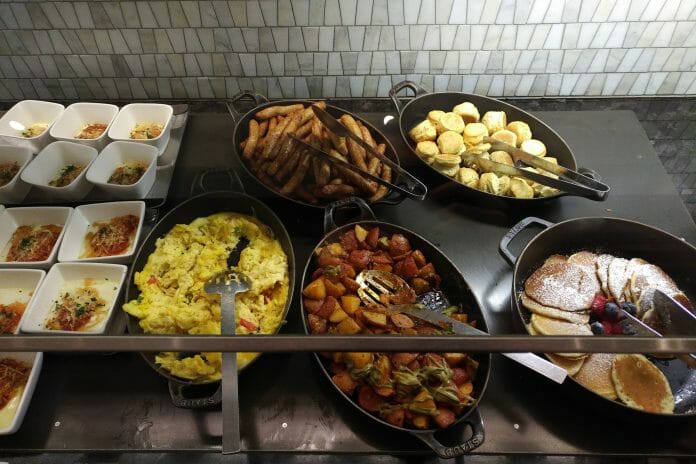 Truth be told, I was hoping to see more “chef-driven” creations (breakfast sausage, biscuits and pancakes are as paint by numbers as it gets). The highlight was the pancakes, but that’s probably because I got a fresh batch that just came out of the kitchen (general rule: pancakes don’t hold up well in a buffet setting). I found the eggs rubbery and didn’t think the overall dining experience was anything to write home about. Perhaps there’s just less scope to be creative with breakfast (I imagine some people would revolt if they didn’t have the classic breakfast items), and it’d be more fair to assess the F&B offerings based on a lunch or dinner menu. For what it’s worth, here’s the selection for lunch and dinner:

Although the dining experience was a bit disappointing, it’s important to remember that the Centurion Lounges were opened as an alternative to standard US domestic lounges, where fruit and bagels are the standard offering and alcohol is chargeable. Viewed from that perspective, the Centurion Lounges are head and shoulders above the competition. The service in the lounge was impeccable, and it’d be a very solid option for a place to get work done.

It’s worth noting that I didn’t get the “full” Centurion experience, because this lounge didn’t have frills like spa treatment. I’m hoping to check out another Centurion lounge soon- LAX should be receiving one in 2019, hopefully in time for my honeymoon visit to California.

All in all, the Centurion Lounges are a welcome perk of holding the AMEX Platinum Charge card, and here’s hoping one finds its way to Singapore soon.

I was at Prive at Keppel the other day and there was actually an exclusive lounge on the second floor and was a stark difference between the crowded lines and queues on the first floor restaurant. That’s when I thought it may be nice to have the centurion change card. AMEX platinum and plat reserve did not qualify for entry. Haven’t heard milelion mention much about this facility in Singapore so thought I’d bring it up here.

That place is called Platinum Vibes, and allows access for both Centurion and Platinum charge card members. However the lower tier cards such as Platinum credit card and Plat Reserve don’t get access.

The Longest Flight in the World: United Polaris Lounge IAH Review – The MileLion

The Longest Flight in the World: ANA B787-9 Business Class NRT-SIN Review – The MileLion