SAA is basically the friendzone of Business Class products. I like it, but not enough to make Voyager my Star Alliance FFP. That crude metaphor goes further: SQ KF doesn’t treat me well, but I still keep going back, believing I’ll be the one to change it, and teach it to love. Ah innuendo.

In other news, my upgrade bid had been accepted!

So I had around 3.5 hours of unparalleled luxury ahead of me. Sort of.

It started where all great flights start. With a bus gate.

The on-board product has a handsome, brown colour scheme.

But it’s fairly spartan – no in seat IFE (but fold down screens every 3 rows).

The catering (lunch) started with some extremely creamy salmon thing 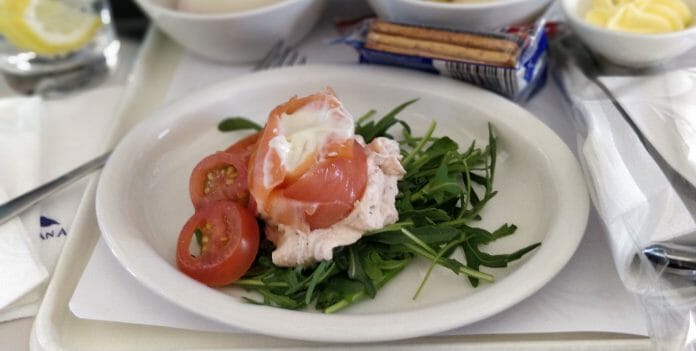 and an uninspired take on chicken and rice. Oddly, I ended up having chicken and rice on AF La Premiere not long after this (stay tuned for that review). Maybe they’re not so different.

I passed on the pudding, but you can see it in the background of the chicken dish. Credit where it’s due, serving a 3 course lunch (well 4 if you count cheese) on a 3.5 hour regional flight is much more generous than a lot of airlines, so kudos to SAA for that.

The flight staff were a bit underwhelming. For example, the meal service began with “canapés” – three anonymous bite sized dishes on a single plate. When I asked for cutlery to eat it with, I was told “we don’t normally give out cutlery for the canapés”.  Seriously? In ~10 minutes, you’re going to serve the main course, and there are good odds that that dish comes with cutlery. So, instead of a story about what you normally do, imagine if you just got the cutlery that you were soon going to give me anyway?

Another example. I was asked if I wanted any wine with my main course, so I asked the FA what their recommendation was. “Oh I don’t drink, so I couldn’t tell you” was the reply. That’s fine, I 100% respect your choice if you don’t want to drink. But again, what if, instead of a story about your life choices, you asked the other FA what the recommended wine was for the dish so that you could recommend one?

My point is not that I expect all FAs to drink and judge this one for not drinking, my point is that the wine recommendation for a dish is, presumably, information that is within reach. I think the default shouldn’t be explaining why something can’t happen, but investigating whether that thing could be achieved within a reasonable level of effort. To me, that’s service 101. To be clear,  my flight was not intolerable because of the lack of wine pairing with the meal;  I only raised it to illustrate why I thought the service was poor.

The flight was otherwise fairly unremarkable, and we soon began our descent into Entebbe. In a bout of luck, my trip coincided with the annual goat races – what a treat!

More importantly, I was one step further along in my itinerary and one step closer to the La Premiere flight…

The Milelion Community
The Milelion Community is made up of like-minded people who want to share tips to help each other travel better for less. If you've got a tip, trip report or any other hack that you think the community would be keen to know about, reach out via our contact us option!
Previous articleSingapore to South, East and West Africa: South African Airways Baobab Lounge JNB Review
Next articleDBS American Express cards offering $200 rebate on foreign currency spend