From 9 September, both SCB Prudential cards will earn 10X points on FCY and 5X points on dining. Here's why it's no big deal.

If for whatever reason you hold an SCB Prudential Platinum Card or SCB Prudential Signature (formerly known as PruPrestige Visa Signature), you may have received a letter about some upcoming enhancements to your card.

On the surface, this may sound exciting because most of us are conditioned to think that 10X points= 4 mpd and 5X points= 2 mpd. But that’s not quite the case where SCB is concerned.

SCB’s Rewards Program is a bit of an oddity as far as banks go. If you navigate to the rewards portal and look at the Air Miles section, you’ll notice there are two distinct sections- one for Visa Infinite cardmembers, and one for everyone else. 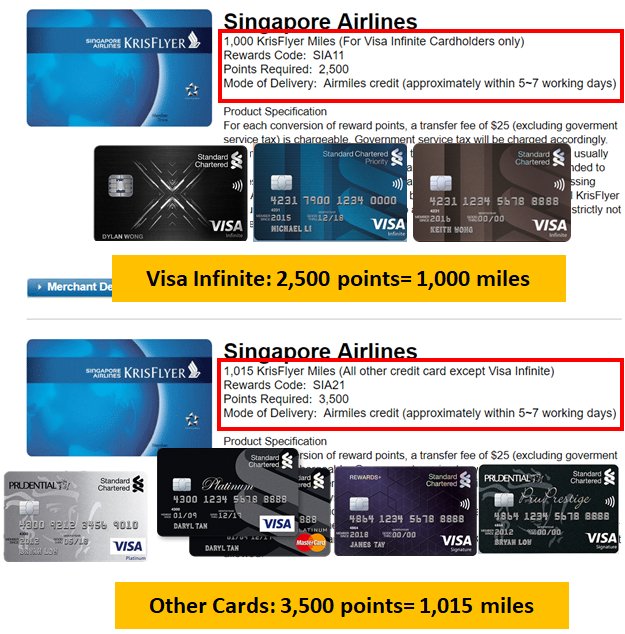 Convert those earning rates into miles, and suddenly the value proposition doesn’t sound that impressive.

It’s even worse when you consider the caps that SCB has imposed on these bonus rates.

You could easily earn 2 mpd on dining without cap via the HSBC Revolution card, or even 4 mpd via the UOB Preferred Platinum Visa if Paywave is accepted. Find a restaurant that takes GrabPay, and you get 4 mpd indirectly through the Citi Rewards Visa. Similarly, with the debut of the OCBC 90°N Card, it’s now possible to get an uncapped 4 mpd on overseas spending (until 29 Feb 2020).

So there’s really no reason why anyone should be considering either of the Prudential cards as miles earning tools. Remember: SCB’s 11 new loyalty partners are only available through the X Card, so there’s no case to be made for transfer variety either.

I can’t imagine a large number of people who read this site would hold a Prudential credit card anyway, but if you know someone who does, do them a favor and point them to better cards for overseas and dining use.

Aaron Wong
Aaron founded The Milelion with the intention of helping people travel better for less and impressing chiobu. He was 50% successful.
Previous articleLast Day: Buy World of Hyatt points with a 40% bonus
Next article2019 Edition: Best Cards for Overseas Spending

Set your watches for 9 a.m and get a Dyson Pure Cool Me (worth $499), regardless of whether you're a new or existing cardholder.
Read more

How does COVID-19 change the miles versus cashback equation?

Are miles still worth collecting in the new normal? Who should consider making the switch to cashback?
Read more

If you are a SCVI cardholder, do the points pool and you get to redeem at the 2.5pts = 1 mile rate?

nope. SCB does not pool points. there is ONE exception- they will pool points from SCB VI and SCB X Card for the purposes of redeeming KF miles and KF miles only (i.e. not any of the X Card’s 11 new partners)

I am SCB VI card holder and over the years whenever I redeem the miles, the Rewards website allows to ‘pool’ the points from the SCB Prudential Card to redeem at 2,500 points for 1,000 miles.

Saying that, I m looking to cancel the SCB Pru card given the limited benefits. I intend to pool the the points again before I cxl the card.

interesting! perhaps pooling is possible for krisflyer only. you say you could do this online without needing CSO intervention?

thank you Prudential for wasting paper sending out that junk by mail to cardholders.

I hold on to a SCB Prudential card because at that time it’s the only card that will earn you points when you pay for the premium.

Its time to relook at how we pay Prudential with all these changes. Anyone have better ideas on this?

Boc elite miles gives points on insurance. Whether you’re willing to put up with the rest of the boc experience, however…

I use Maybank visa infinite card to pay prudential insurance, no problem with points.

No it doesnt. Why are you asking here? Test it youself

Because i read this line in the article above:

Find a restaurant that takes GrabPay, and you get 4 mpd indirectly through the Citi Rewards Visa.

All along I thought it does not!

Yes, as per my top-up in June. Anyone else have a more current data point?

still have. i think you’re the only one not getting it

I use this card to pay my prudential premiums, for which I get the points that i could convert to miles. This is the only reason I hold this card,
AFAIK No other cards allow points/ miles for insurance premium payments

Boc + hsbc revo both can

Thanks for replying, it’s 0.4mpd
But din know ocbc award puts for insurance though it’s still not worth it

Well it’s either 0.4mpd or nothing at all unless willing to buy miles with cardup etc. Prudential only accept cards from 6 banks (sc, citibank, maybank, dbs, uob, ocbc) and most of the cards already excluded.

Just in from hwz titanium thread, ocbc admin confirmed 1x ocbc$ given for prudential but this will cease from 1oct, ie. no pts if merchant is under mcc 6300 (insurance sales, underwriting, premiums)

Nothing seems to be left for prudential other than cardup/ipaymy

Prudential does not accept BOC and hsbc cards. Only sc, dbs, uob, ocbc, Citibank and maybank.

Aaron, you’re always one step ahead of the banks. They should pay you for consultation

Thanks lenny! I try to stay informed

What can we use for AIA premiums since it doesnt accept Visa?

Think any MasterCard that does not exclude insurance payment will work. I used ocbc Titanium and get 0.4mpd

Thanks for the info. Seems a better option than BOC em as that would result in orphan miles