Cathay Dragon's regional Business Class won't be winning any "best of" awards anytime soon, but it's a perfectly cromulent way of getting from Point A to B.

After our stint in The Wing (where the cabanas are lovely but the food less so), we boarded our Cathay Dragon flight to Hanoi. From there, we’d catch a Singapore Airlines flight back to Singapore, then another one onwards to Male (in case you’re wondering why the strange routing, three words: Cathay mistake fare)

I’d previously reviewed Cathay Dragon’s regional Business Class from Hanoi to Hong Kong, but that was on their narrowbody A321. Today’s flight would be operated by a widebody A330-300. 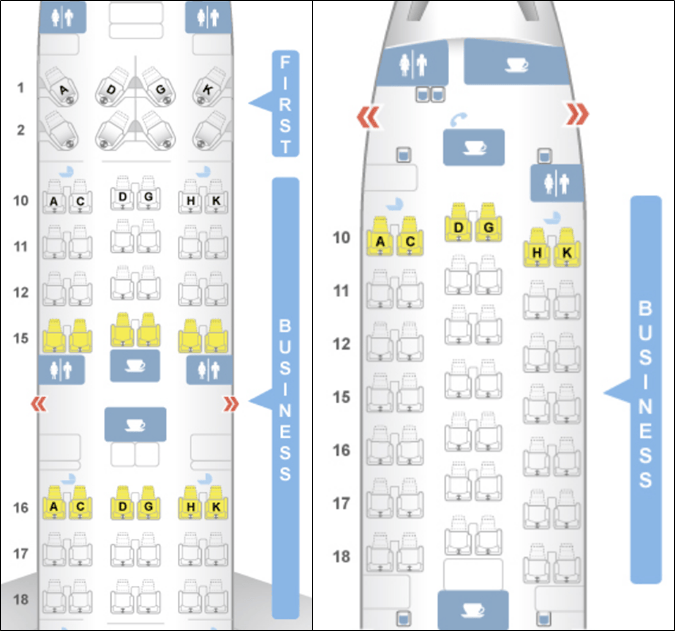 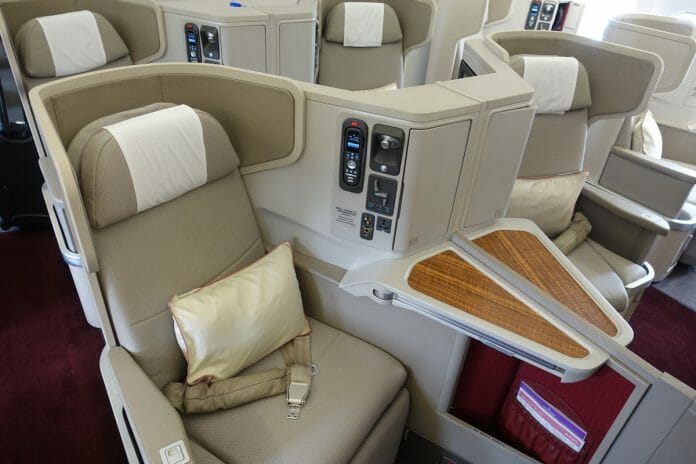 Cathay Dragon uses the same regional Business Class seat as Cathay Pacific, the one introduced in 2013. It’s a modified Recarro Comfort Line 5510 recliner, but as AusBT notes, it borrows some elements from an angled-flat seat such as a fixed shell that protects the legroom of the passenger behind. 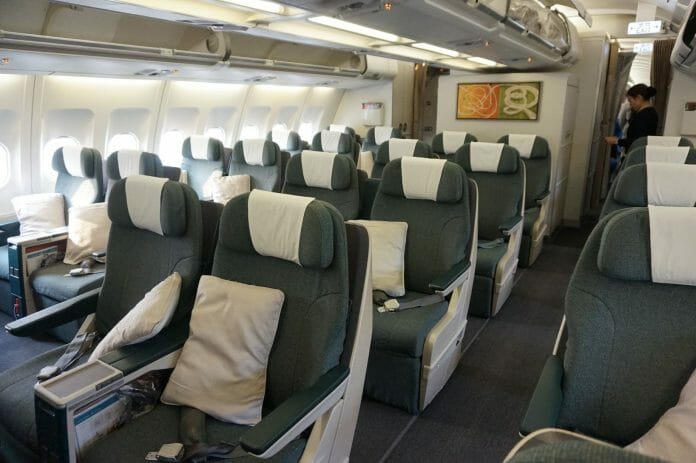 It says a lot about how much Business Class has progressed that it felt strange to be in a widebody aircraft with recliner seats (the last time I encountered this was on an ancient Singapore Airlines flight to Bangkok), but it was, after all, a two hour flight. 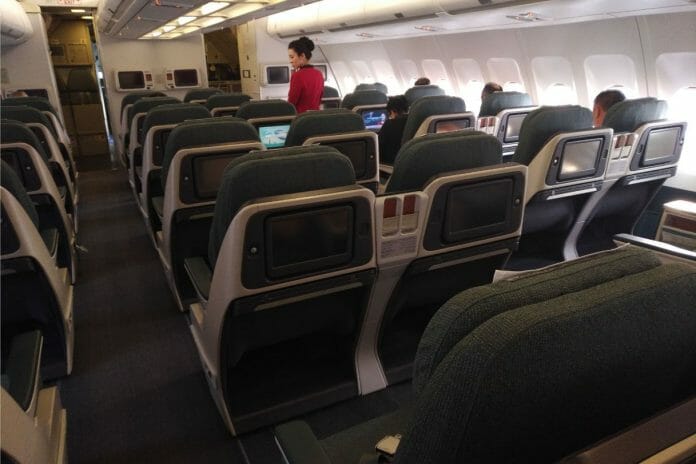 The 2-2-2 configured seats are 21 inches wide with about 47 inches of pitch, and each seat has a 12.1 inch IFE screen and fully electric seat controls. 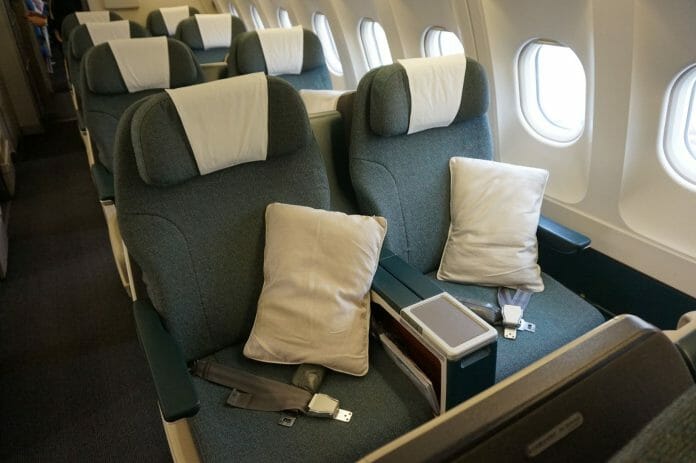 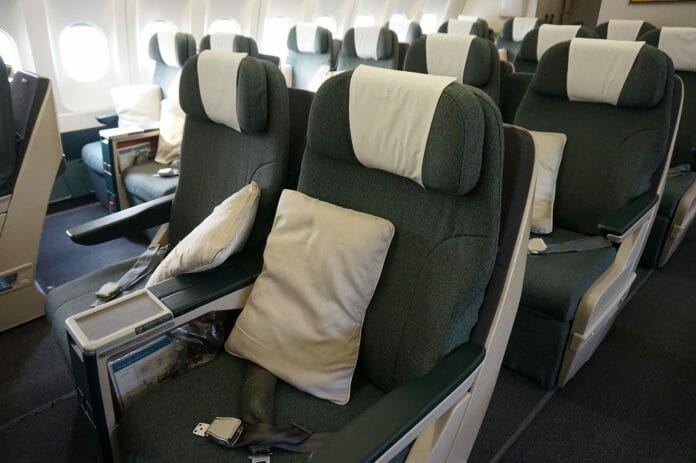 Although the seats are recliners, there are still some nods to modernity, such as electric seat controls, USB charging and in-seat power. 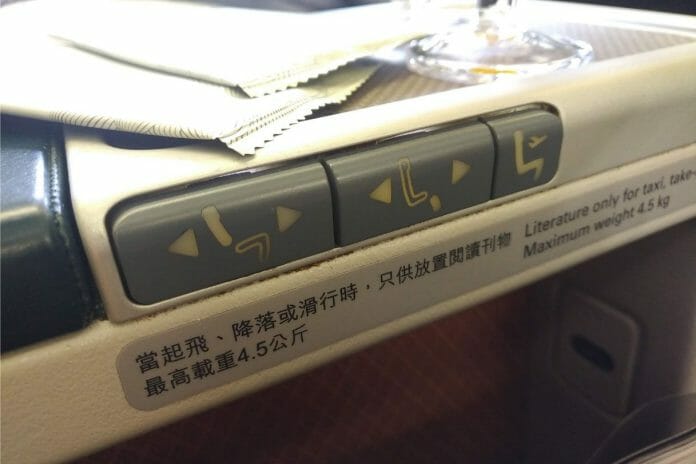 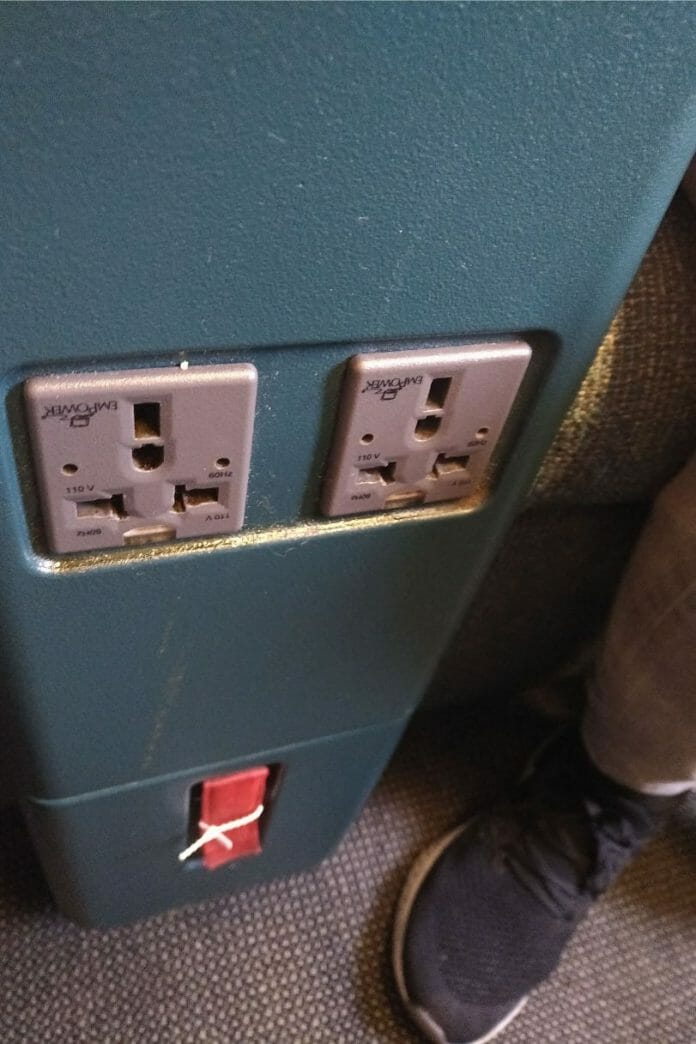 There’s also an IFE remote in the armrest, despite the fact the IFE uses a touchscreen. 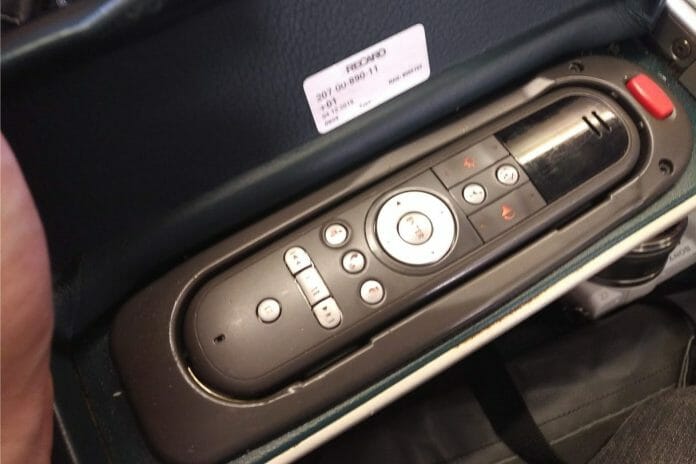 Storage-wise, there’s a small literature pocket where the safety card and inflight magazine go. This was large enough for a tablet PC or slim laptop. 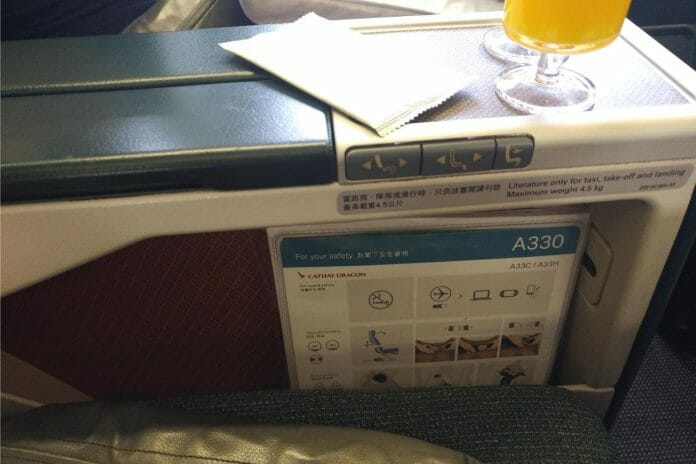 A small pouch to your front serves as storage space for your phone. There’s a thoughtful cutout at the bottom so you can connect your charging port to the nearby USB outlet. 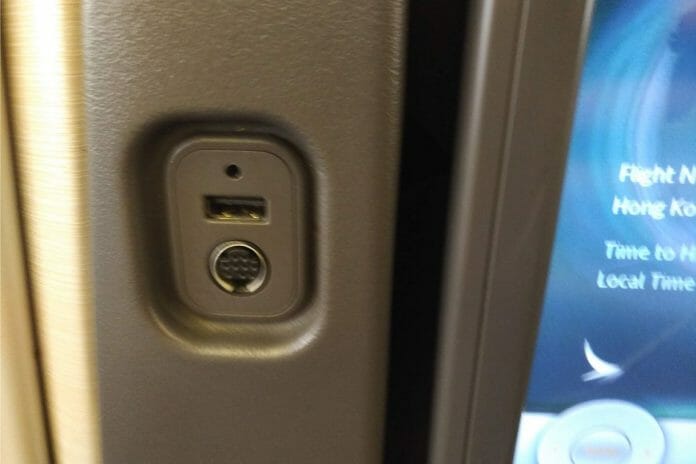 Your tray table extends outwards from underneath the IFE screen, and it was sturdy enough to support heavy typing without any bounce. I could be mistaken, but I believe Cathay provides the same headsets on Cathay Dragon as they do on Cathay Pacific. These were fairly comfortable, although the noise cancelling wasn’t very good. 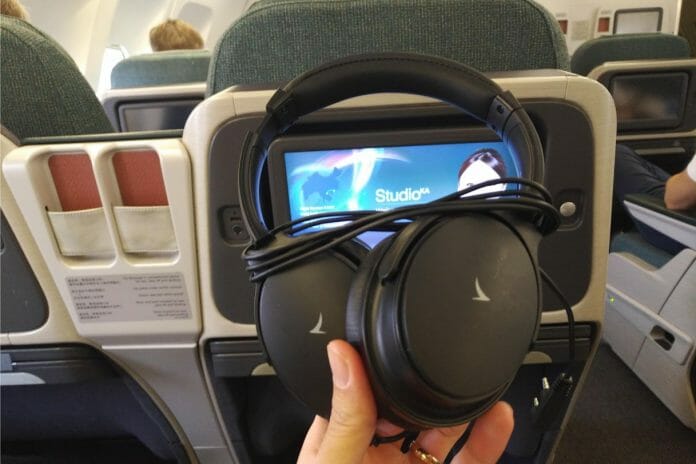 As this was a short flight, the crew distributed menus on the ground and took breakfast orders before departure. I’m impressed that Cathay continues to offer proper menus on these short routes. SilkAir has done away with them in favor of a communal menu board, and Singapore Airlines has substituted a single sheet menu on shorter routes. 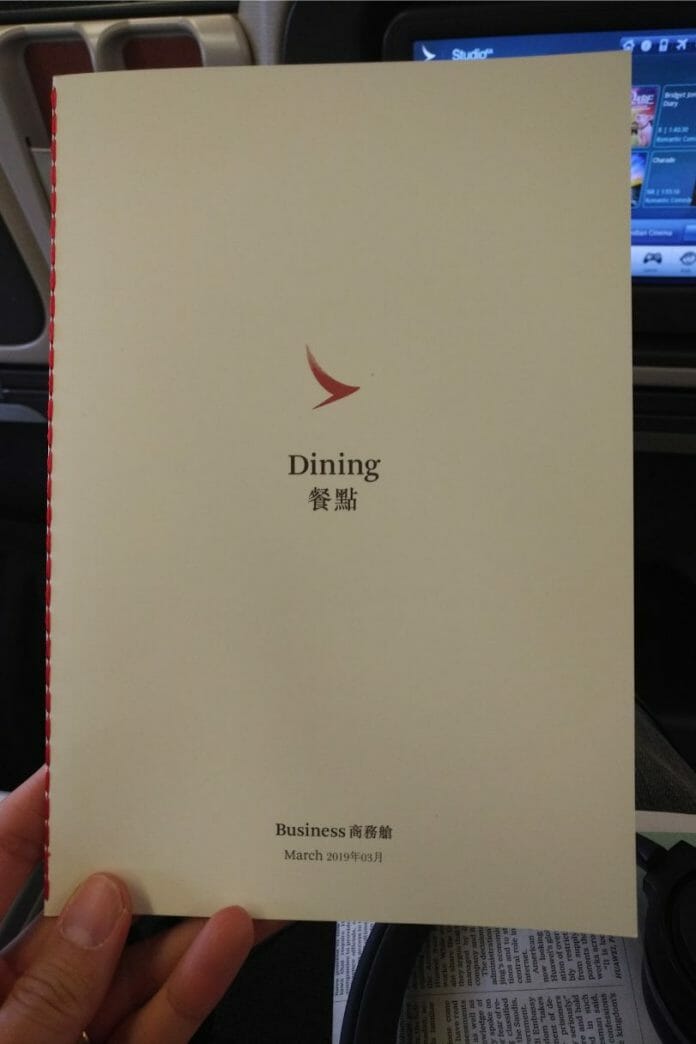 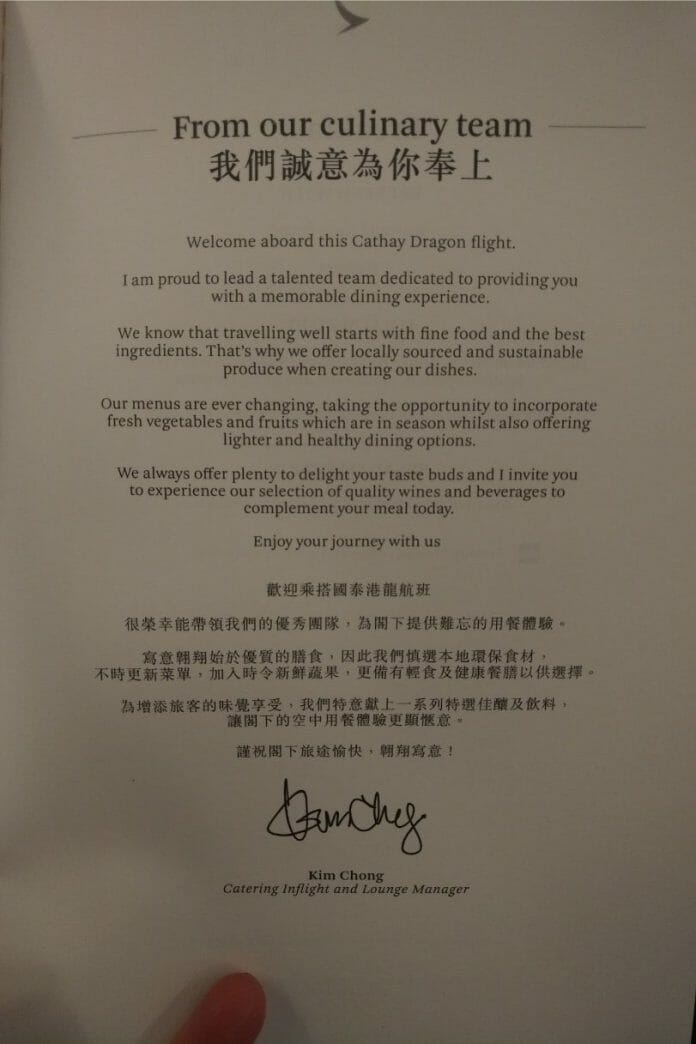 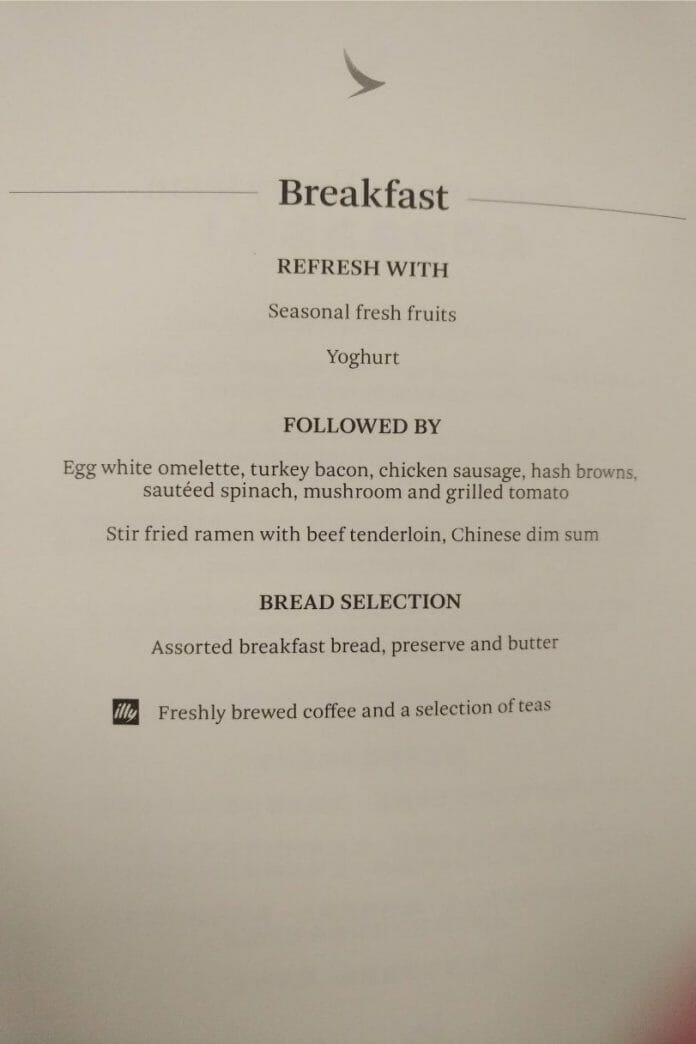 After a quick pushback we took off and headed South West towards Hanoi. During the climb I took a quick peek at the IFE system, and saw the selections were similar to those on my previous Cathay Pacific flight. The only difference is that instead of being called StudioCX, the system is called StudioKA (KA= Cathay Dragon’s code). As I mentioned in my previous Cathay review, the main issue I have is that the movies tend to be older. 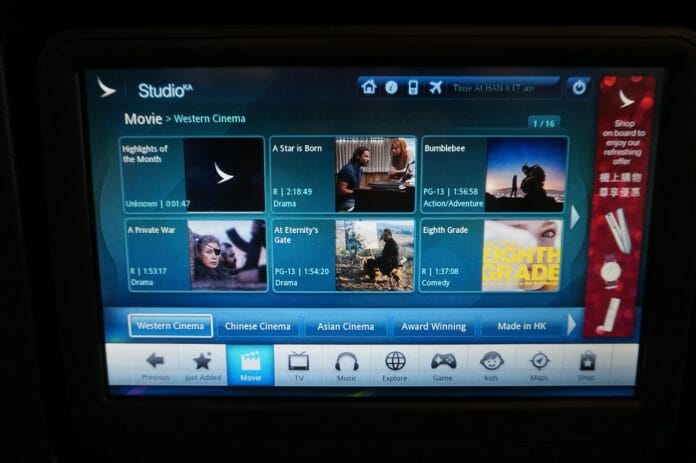 Within 15 minutes of the seatbelt sign going off, breakfast was brought on trays. I went for the Chinese option, which featured stir fried ramen with beef tenderloin and Chinese dim sum. It wasn’t fantastic, but I was pretty full anyway. The Milelioness went for the western option of egg white omelette, turkey bacon, chicken sausage, hash brown, sauteed spinach, mushroom and grilled tomato. Although Cathay can do pretty awesome breakfasts in the air for its First Class passengers, this was a rather bland rendition of a full English. The hashbrown was soggy (as airline hashbrowns are wont), the bacon was soggy, the spinach was soggy and the omelette was bland. 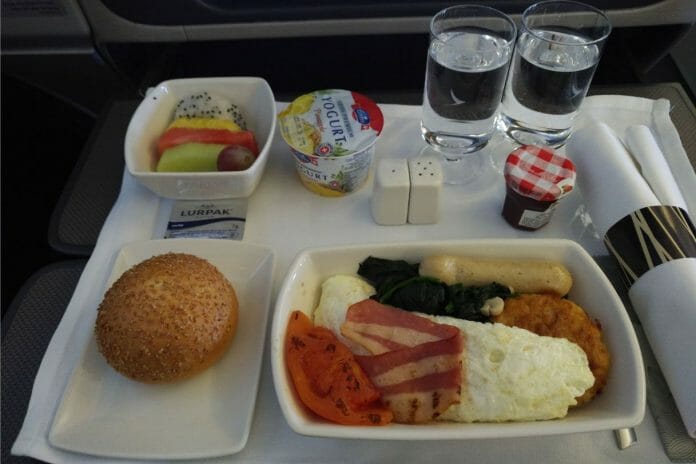 The crew were great, however. They made several passes throughout the cabin with extra bread, made sure no one’s drinking glasses ever went dry and kept an eye out for anyone who had finished eating. The entire service was wrapped up in just under an hour, but it never felt rushed.

I popped into the bathroom to see whether Cathay had done anything fancy, but the loadout was pretty standard issue for a regional flight. Jurlique body lotion, Jurlique foaming cleanser and generic hand soap . The best thing I can say about the flight is probably that it was unmemorable. The time went by quickly, and before I knew it the cabin crew were readying the cabin for arrival. We arrived 10 minutes ahead of time in Hanoi, which gave us plenty of time to make our connecting flight to Singapore.

If you’re connecting through Hanoi for your Cathay mistake fare,t he good news is that the airport is fairly small, and connections are relatively painless. Even if you don’t have your onward boarding pass, there’s a transfers desk right opposite immigration where someone will assist you. Then it’s just a simple matter of clearing security once more and you’re once again in the departure area.

Cathay Dragon may be the “ugly sister” brand of Cathay Pacific, but it’s not something to actively avoid. Unless you’re claustrophobic, I wouldn’t really sweat about getting the A330 over the A321 on Cathay Dragon’s regional routes. The seat is fundamentally the same, and the main difference is one aisle versus two.