When will the SCB X Card reopen for applications? [Update: relaunch imminent?]

The SCB X Card has now been closed for applications twice as long as it's been open. When we see the card on the market again?

The SCB X Card debuted on 25 July. On 20 August, the bank decided to suspend applications. It’s now 14 October. This means that as of today, the X Card has been closed for applications twice as long (55 vs 27 days) as it’s been open. It’s kind of staggering to think that a newly-launched product hasn’t been taking applications for two thirds of its lifespan.

If you visit the X Card’s landing page, you’ll see the same message that’s been displayed since 20 August: applications are closed; leave your contact details on the waitlist and we’ll let you know if/when that changes.

Why did SCB close applications for the X Card?

SCB’s website states that applications are suspended due to “overwhelming response”, but what’s not clear is whether SCB can’t or won’t do any more fulfillment. Here are the three most common theories I’ve heard regarding the X Card’s continued absence.

They’re still out of boxes

As we all know, the X Card boxes were an early victim of the product’s success. The first batch of customers received their X Card in a beautiful light up box, the second received theirs in a regular box without lights, the third received theirs in a plain envelope, and the fourth received no card at all (although I believe the backlog has since been cleared).

Some say that SCB is in the process of manufacturing additional X Card boxes, after which card fulfillment will resume in earnest. But this doesn’t make sense, because we know that SCB is not averse to using plain envelopes where necessary.

Besides, if SCB needs more boxes, they could always consider buying some on Carousell. Fast deal bro.

They’re still out of cardstock

The SCB X Card is a hybrid metal card, which is somewhat more difficult (not to mention costly) to manufacture than traditional plastic cards. One theory goes that the overwhelming demand for X Cards has led to the bank running out of cardstock, and once that’s resolved, applications will open once again.

I don’t think this is true either. Take a look at the back of your X Card, if you have one. See those letters and digits at the bottom left? The “CS” stands for CompoSecure, a major manufacturer of metal credit cards. CS also manufactures several other high-end cards in Singapore (including the AMEX Platinum Charge), and as far as I know they haven’t faced the same fulfillment issues. 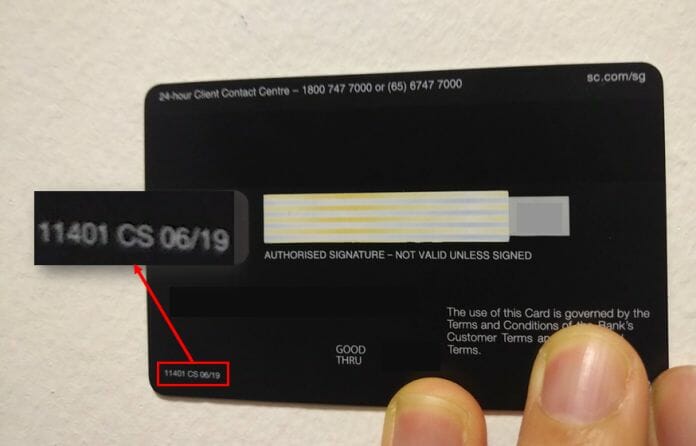 My contacts in the industry tell me there’s no cardstock shortage at all; if anything, there’s more supply than in the past thanks to the proliferation of metal cards.

That said, it is possible that while there’s no shortage of card material in general, SCB didn’t order enough X Card blanks. If so, it’ll be at least a couple of months for additional supply to arrive.

The bank ran out of acquisition budget

So that leaves us with the third theory: that SCB simply didn’t expect the X Card to perform as well as it did, and ran out of acquisition budget for the year.

It says a lot about the response SCB received that the X Card’s 100,000 miles sign up bonus, originally slated to run till 31 August, ended up lasting just six days.

SCB subsequently cut the bonus by 40% to 60,000 miles. Although psychologically speaking I’d find it hard to take a 60,000 miles offer knowing I just missed out on a 100,000 miles one, it was still objectively a generous bonus.

The 60,000 miles offer was supposed to last till 30 September but SCB pulled it after 20 days, suggesting that demand was still strong. After all, 60,000 miles, even after offsetting $695.50 of annual fees, is still going to cost the bank a pretty penny.

It’s also possible that the X Card hasn’t generated enough leads for Priority Banking to justify the acquisition offer. I mean, it’s safe to say the X Card was never meant to be an end in itself. If anything, it was supposed to serve as a loss leader for Priority Banking: affluent millennials sign up for the card, the bank identifies potential targets and cross sells investment and financial planning products. Perhaps that hasn’t happened in the volume that SCB expected, but whatever the case, I think this is the strongest of all three theories.

When will X Card applications reopen?

If it’s true that the X Card hiatus is because SCB has well and truly blown its acquisition budget, then there are two ways things can proceed:

I think (2) is way more likely than (1). My theory is that SCB is now waiting to see how many X Card holders actually qualified for the 100,000 miles bonus, something that will be sorted out by the end of October or early November.

Once they have that figure, they’ll know how much budget they have to play with (and can also better estimate how many are likely to hit the 60,000 miles bonus). The offer will be tweaked accordingly, and we may see a relaunch in the middle of November.

But that’s just an educated guess on my part, and the fact of the matter is no one outside SCB knows for sure. Certainly not customer service, which simply repeats the party line about the waitlist: 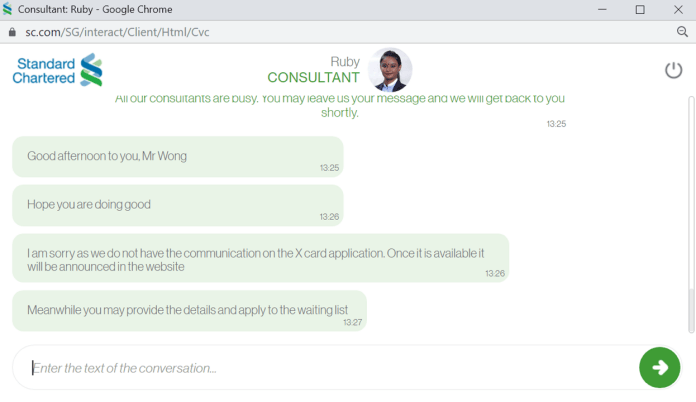 I’ve reached out to SCB’s Corporate Communications team to ask about the X Card relaunch, and will update this article when I receive a response.

If you’ve been living under a rock and somehow missed the first (and second) waves of X Card sign up bonuses, don’t despair. There is no way that a bank would spend all that time and money designing a product only to keep it live for 27 days.

The fact is, SCB wants to relaunch the X Card. With every day that X Card applications remain closed, it’s losing potential customers to other banks. What’s more, it’s not like this is an entry level $30,000 card, the type people apply for without blinking. This is a $80,000 card with a non-waivable $695.50 annual fee, and I can’t think of too many people who would be willing to hold more than one card in that neighbourhood. So it’s in SCB’s interest to get this back on the market as soon as they can.

The X Card will return, the only question is in what form.

Who knows? Maybe they will not relaunch after all. Then this X metal card will become collectors’ item. Becoming credit card folklore. Biggest signing bonus ever. Easiest Visa Infinite ever in terms of salary requirement. But yet with the shortest 27 days life span.

It will join the annals of infamy, maybe a HBS case study, on how not to launch a credit card…

Oh and once I have my 100,000 miles and the 6 months is up then SCB will have a spare spot as I will be exiting the building.

It’s really a shame, a total failure. It shows the SCB team has so little knowledge and understanding of their customers and target market. I’m wondering internally how the management team look at this? What a big joke in a so-called mature financial market. If SCB can’t manage the market event well, how can the high net worth clients trust the bank to manage their wealth well?

Strange that SC is getting their cardstocks from CompoSecure considering the X Card doesn’t look as pretty as any of the award winning cards featured on their site https://www.composecure.com/products/ Seeing that the card has been suspended for so long it is likely that they have definitely ran into so issues. (Change supplier maybe?)

X card is relaunched today. But no metal card (for now). So the SCB metal card is a rarity.