The SCB X Card’s launch is proving to be something of a cautionary tale for banks everywhere. Unveiled on 24 July, the X Card offered 100,000 miles when customers spent S$6,000 within 60 days of approval– a unprecedented bonus, and wildly successful. 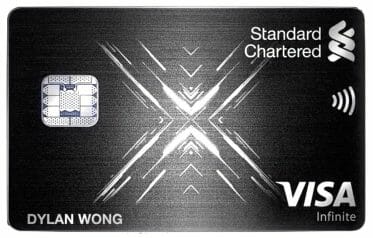 Perhaps even a little too successful. The 100,000 miles offer was initially set to run until 31 August, but just seven days after launching, SCB decided to pull it early. This led to a mad rush of applications as people tried to get their foot in the door before it slammed shut at midnight on 31 July.

Since then, SCB has faced cardstock shortages, production delays, and all manner of snafus in getting the X Card to customers. Case in point: the first batch of applicants received their X Card in a snazzy box that lit up when opened, displaying the card in dazzling LED lights. The second batch got their X Card in a regular box, sans lights. The third got theirs in a nondescript white envelope, together with an apology that noted the bank had run out of boxes.

At least they got their cards. There are still numerous reports floating around the X Card’s Telegram group of people who were approved on 31 July (or earlier) still not receiving theirs.

So perhaps it’s no surprise that SCB has decided to call a time out on new X Card applications. Can you spot what’s missing in the screenshot below?

No? How about here: 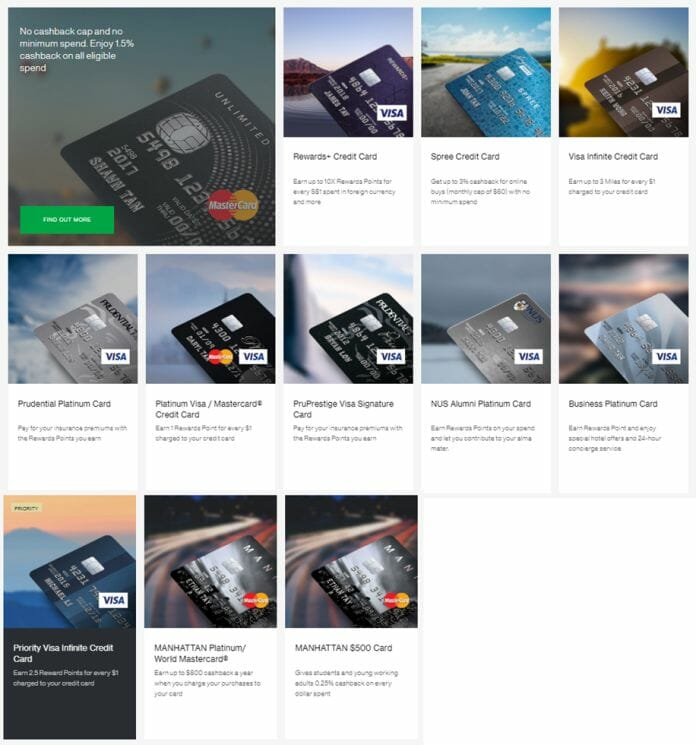 If you still haven’t picked it up, the X Card has gone MIA from SCB’s credit card listings. When I raised this with customer service, here’s the response I got: 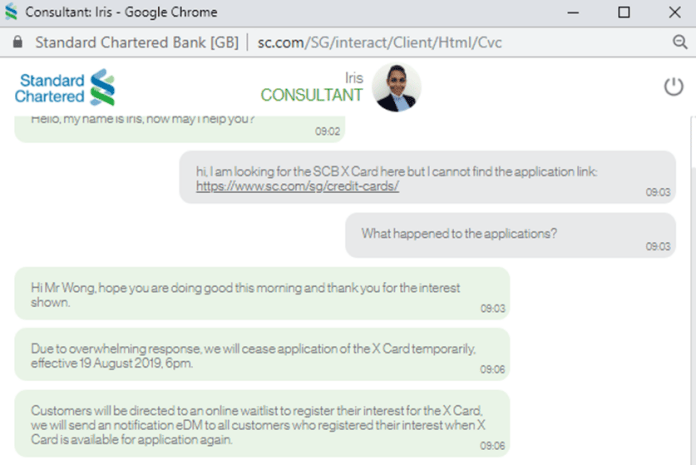 “Due to overwhelming response, we will cease application of the X Card temporarily, effective 19 August 2019, 6pm. Customers will be directed to an online waitlist to register their interest for the X Card, we will send a notification eDM to all customers who registered their interest when X Card is available for application again”

The link to the online waitlist is not available yet, but the CSO mentioned it would be posted later today.

Given that the 60 day timer to hit S$6,000 starts when the card is approved, you can imagine the anxiety of those who haven’t received their card yet (SCB is extending the spending period by 10 days for selected customers, but that does little good if you wait more than 10 days for your card).

In that sense, it’s probably the right decision to halt new applications, since SCB is currently approving cards faster than it can ship them. Based on online chatter, some are convinced there’s a conspiracy to ship cards late in order to minimize the time people have to hit S$6,000. To that I’ll simply say: don’t attribute to malice that which can be explained by incompetence.

If you already have your X Card, I hope you’re well on your way to hitting your spending requirement! And if you need ideas on what to buy, here’s a potential investment for you… 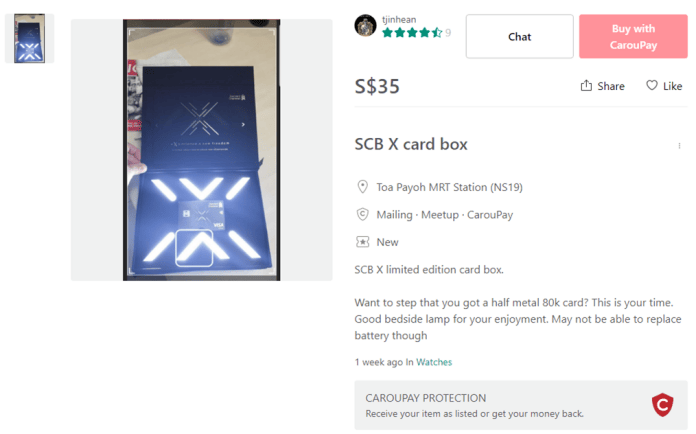 Aaron, thank you for sharing. I am glad that i got mine in July.

I still think SC is so lame in this launch, shame on SC

how not to launch a credit card.

“To that I’ll simply say: don’t attribute to malice that which can be explained by incompetence.” 😂

Aaron, trying to make a quick buck by selling your Card box eh?

If you read his previous posts, you’ll have noticed that he was rejected multiple times and never got the card. Poor joke.

I did actually! updated the previous post. so what happened is my RM contacted me on the morning of 2 Aug and said he managed to push it through with the 100k offer. he needed me to send him some documentation to prove that I applied on/before 31 July though, but fortunately/unfortunately I had 4x rejection emails to show him.

Fortunately or unfortunately I was one of those who had my card approved on 31 July. Still yet to receive my card… 🙄 Called in last week and was asked to wait for them to call back. 🙄🙄 Still nothing from them as of now… 🙄🙄🙄

I applied on 31 July and my card was approved the same day. After several calls and reassurance from SCB that my card was sent out via Singpost on 5 August, I received my card on 13 August . By then I had to pay extra $800 for my business class tickets which has also hiked in price. I made an official complaint to SCB yesterday about the underwhelming experience — hm… somehow the date and time coincided with the suspension of application. Anyway, haven’t heard from SCB since…

Ok la. At least u received your card lo. Mine still in limbo… 😅

Hi Aaron,
have you posted anything on how soon the miles will post to our SCB accounts?

I understand from SC that I will only get the 100,000 miles in November even if I spend $6000 and pay for the membership fees in August. But strange though, I have received my bill and they did not charge me membership fees.

Hi Newbie, does Aaron look like the SCB customer service hotline to you? How about you order some tapas from Aaron while you’re at it?

He posts an article .. I have a question on the topic which isn’t in the article so I ask .. isn’t that how these things work?

Or is the fact I am a newbie you feel it’s ok to be nasty?

Don’t mind the resident troll (and several of his few yes men). Unfortunately, He has, de facto, been given a free pass to be nasty. Until more stringent measures are put in place to encourage responsible postings, we’ll have to put up with such nastiness. My take on this is if Aaron doesn’t want to reply, then he won’t. It’s that simple. Perhaps another helpful soul has already called customer service and is willing to help. Who knows? Essentially, we don’t need an unappointed gatekeeper to set the rules for a blog that isn’t his; but ultimately I’ll leave it… Read more »

Don’t mind the resident spoonfeeders (and several of their clones). Unfortunately, they have, de facto, been given a free pass to be spoonfeeders. Until more stringent measures are put in place to encourage responsible feedings, we’ll have to put up with such spoonfeeders. My take on this is if Aaron wants to provide the information, then he would usually have in the article. It’s that simple. Perhaps another less spoonfeeding reader has already read the T&Cs and found the answer himself. Who knows? Essentially, we don’t need an unappointed spoonfeeder to set the rules for a blog that isn’t his;… Read more »

Well, if you’re a spoonfeeder, then yes that’s how things work. No need to see whether the answer is on the bank’s material. Aaron is your personal concierge and deserve to be, since the argument made by the spoonfeeding ilk is that Aaron is obliged to answer and service all questions since he earns money from this blog and his classes.

My posts are being deleted. Evil Ben must have higher connections than I thought.

I applied for the Priority Pass, waited a week for the activation code, only to be sent a code that doesn’t work.

Now, we’re hearing more and more horror stories out of SC. I wouldn’t be surprised if they failed to credit any of the qualified customers with the miles once this fiasco is over.

i received the code and it’s working fine

Same here, 2 cards (belonging to my wife and mine), the PP codes do not work. Called the bank and they just pushed the fault to PP and asked me to call PP. One of the worst service rendered, ever.

I guess everyone complaining obviously didnt apply for the BOC Elite Miles haha, that was the real disaster…

haha, at least we received the card in time. although in a regular box. cant remember whether my wife throw away the box or not…lol

Aaron, for the lesser mortals like us who are not priority customers, do you know why we have our applications rejected?

I followed up with SCB after more than 3 weeks of silence, and they told me my application was unsuccessful. I am not sure why though – my income is well over the requirement and my credit score is AA (1950/2000). I used the TML promo code on signup. Sigh….

Unfortunately, banks need not explain why any application is rejected, regardless of your income and/or credit scores… Case here in point, even Aaron had his application rejected not once, but four times, and this when he is (in some way or form) a ‘Privileged’ SCB client, and his RM had to go appeal his application (which actually sounds crazy to me).. But yeah, c’est la vie…!

i don’t have any answers, sadly. I know of a few others with your circumstances who didn’t get it (eg my wife, with a 2000 credit score and income well above the requirements was rejected outright). Promo code only got you “priority” waitlist (i use “” because it wasn’t much of a priority in the end- they still opened applications to all at the same time), and had no bearing on acceptance/rejection. Ultimately, banks do funny things sometimes, and only they know why.

For those worried about reduced time to hit the threshold, I would suggest activating the digital card immediately on approval. You can only do it literally at one point in time which is when the application is approved. Once you’ve done that you will receive your digital card number, expiry and Cvv numbers. You can then just plonk it on your Apple Pay, Samsung or googlepay etc. I did this while I was overseas on vacation and paid literally almost all my shopping and eating on Apple Pay hitting 40% in one week. Remember you only get one shot to… Read more »

Is there any way to access CVV? I didnt write down my details and now can’t find it.

It will appear in your app

Yes but you can use it locally anyway in the meantime while waiting for the card… I so happened to be overseas during approval.